Maybe it's just me but I've found that certain pickup types and there placement under the strings of an electric guitar come in secondary only to the pickups chosen for use. In my case I've owned every arrangement normally able to be found if you look hard enough. For this thread consider Fender type and Gibson type single coils as single coils. 3 singles, (Stratocaster or Nashville Tele), 2 singles, (Telecaster, vintage Gibson, Ricky's, etc.), 1 single in the middle, (Danelectro lipstick), 1 single in the bridge, (Esquire), 3 humbuckers, (Les Paul Custom, Ricky's and others), 2 humbuckers, ( the largest offering along with 3 singles), 1 humbucker in the neck position, (jazz box), 1 humbucker in the bridge, (Les Paul Jr.), single single hum, (multiple examples available) and hum single hum. I know different pickup types and builds are hugely important but I'm just asking about the arrangement under the strings. Also .... I realize that a very small percentage of players use as many as 4 pickups, (Ernie Ball Steve Morse for example), but theis wouldn't be considered a normal arrangement so I haven't included them as an option.

In the poll below please select the three combinations of pickup arrangements you prefer under the strings of your electric guitar.

Not on the choices, but I like hum bridge, single coil neck.
W

Actually, the Les Paul Jr has a bridge single, a P90. And, P90s are what I prefer, either just one in the bridge, or the bridge/neck combo. Works well for rock.

After that I picked two humbuckers, and the Tele type set up.

I cant cast a vote because I love Lace rainbow Pack singles ( Blue=neck, silver =Mid, hot gold 13's=Bridge) and Lace alumatone singles, plus alumatone buckers , dead quiet, no noise what so ever 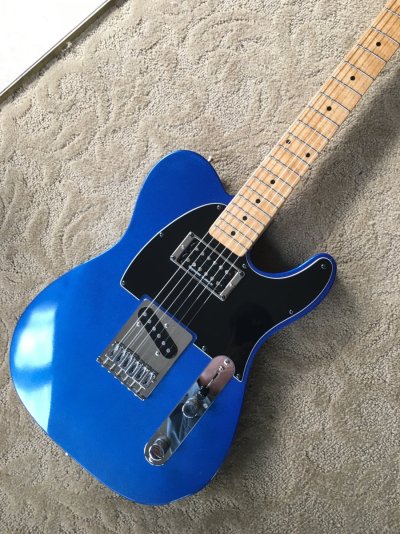 I know from still owning a Strat that I really dislike having a middle pickup. It forces me to think about my hand position so I don't hit it with my pick. Tele, LP, 339? No problemo.

dougstrum said:
Humbucker~neck
Tele single~bridge
I can cover a lot of territory with that combination

I came to this belief in the first instance using my number one guitar, a 335 style Yamaha SA2000S with coil splittable pickups.

Andy Summers, Keith Richard and the studio great Bob Bain also found it worked for them so I modified a 2008 American Standard Telecaster for my own use.

It was a simple matter to put the existing Tele bridge pickup in phase with the humbucker. Push the alnico slugs out of the plastic bobbin and reinsert them with reversed polarity. I was even able to stagger the slugs to my preference for balanced string output as I use a wound G string.

I left the existing 250K pots in the guitar as I was not seeking a bright neck pickup sound.

That Tele is now my go to electric and my faithful Yamaha sees little action. Like @chezdeluxe I find 250k pots are fine, neither neck pickup is dull or muddy~

I have one of each of the following: SS (Thinline tele), SSS ('81 Fender Bullet with Dimarzio Velvets), HH (Custom Telecaster FMT HH), and HSH (EBMM Silhouette).

I find myself playing single coils most often, the HH has delicious coil taps and I play in that mode more than on HB's.

I like my stock Tele neck pickup so I put a humbucker in the middle.

There’s no option for it in the survey. For almost twenty years, I’ve been a two humbucker kinda guy.
Specifically, a TV Jones Supertron in the neck position, and a TV Jones Classic+ in the bridge position.
My Chet, two B Bender guitars, Washburn HB35, and Hohner L59 all have em’.

brookdalebill said:
For almost twenty years, I’ve been a two humbucker kinda guy.
Specifically, a TV Jones Supertron in the neck position, and a TV Jones Classic+ in the bridge position.
My Chet, two B Bender guitars, Washburn HB35, and Hohner L59 all have em’.
Click to expand...

Now that's what I call loyalty.

kookaburra said:
Actually, the Les Paul Jr has a bridge single, a P90. And, P90s are what I prefer, either just one in the bridge, or the bridge/neck combo. Works well for rock.

After that I picked two humbuckers, and the Tele type set up.
Click to expand...

I had a "cheapo" Harley-Benton Jr for a while, it really worked allright. I replaced the original (Roswell, alnico V - around 7 kohm) with little hotter Lollar dog-ear (9,1 kohm). I sold it away, but got a chance to getting understanding certain beauty of single P90. Yes, it really rocks. See, for example, Charlie Starr of Blackberry Smoke doing it with those vintage Juniors (and with that Telly with soap-bar in the bridge-position, too).

black_doug said:
I like my stock Tele neck pickup so I put a humbucker in the middle.

There’s no option for it in the survey.

Sorry for getting "off topic", but that bridge really works, too. I tried that on DIY-basis some years ago, when I had thick base plate and "surplus" Strat saddles layin' around. Worked with thick, heavy and dense northern ash body - when nothing else seemed do to trick.

i like singles, mini hums, firebirds, and CC pickups in the neck, regardless of the guitar. don't like tv jones or wrhb pickups. a lower wind/lower output PAF in the neck can work on some guitars, but i don't like them on fender scale. i don't use bridge that much, but on a fender it should be a traditional fender SC and on a gibson it should be a humbucker or a p90, for variety's sake in guitars i have.

i don't need more than two pickups. i'm fine with just a neck pickup on many guitars too. even my distorted tones are mostly neck, cause you get a creamier sound (more fundamental/less harmonics) for power chords/double stops and lead tones. middle is my clear distortion tone. i only use the bridge for having certain parts cut through, or for playing certain styles at home.

Wilde Bill & Becky Lawrence bridge L500XL, middle L280, neck L500R with serie/parallel switches for each of the L500 pickups.
You must log in or register to reply here.

Are Modern Pickups Better Than Vintage?
2