My first and only Tele - 2022 Blue Burst Player Plus Top

Made from parts I found cheap. Warmoth neck, Seymour Duncan Antiquities, I think. About 20 years ago and it's still my #1. After I put it together, my friend told me the reverse headstock made him dizzy. I find it convenient to tune, if a bit unique.

RocknRollShakeUp said:
My one and only tele, but one of my favorite guitars and often reached for.

It’s a Wildwood 64 thinskin.
Mods are: a Gotoh brass bridge, CS Nocaster pickups (it had a CS twisted tele set prior), and an Emerson 4 way tele switch harness. I also put a Warmoth yellow tort cellulose guard on it.

Oh, and I didn’t think it strictly needed it but on a whim I also put a StewMac 0.25deg shim in it. Which turned a well playing guitar into an amazing playing and feeling guitar. I think it sounds better now too. It also allowed the saddle screws to be screwed in so as not to extrude much at all or any. Sounds and plays like a dream.
View attachment 998724
View attachment 998721
Click to expand...

Instant guitar lust on this one. Love that pick guard on that body, and the dark fretboard, and the selector knob and tone knobs! I just bought my second Tele (first is my avatar pic - 48 years ago). I'm still using my Strat to record, but I'm playing the Tele 10 times more (new Bootstraps are ordered). Here are pics I took for another thread this morning. Mods so far: Rib and arm relief, compensated brass saddles, and Gotoh tuners. Got bored waiting for the post office to deliver a 4 way wiring harness, so I made a new pickguard.

my last attempt at making a 4 way harness left me grumpy and irritated, so I bought a harness for about what I paid in parts… 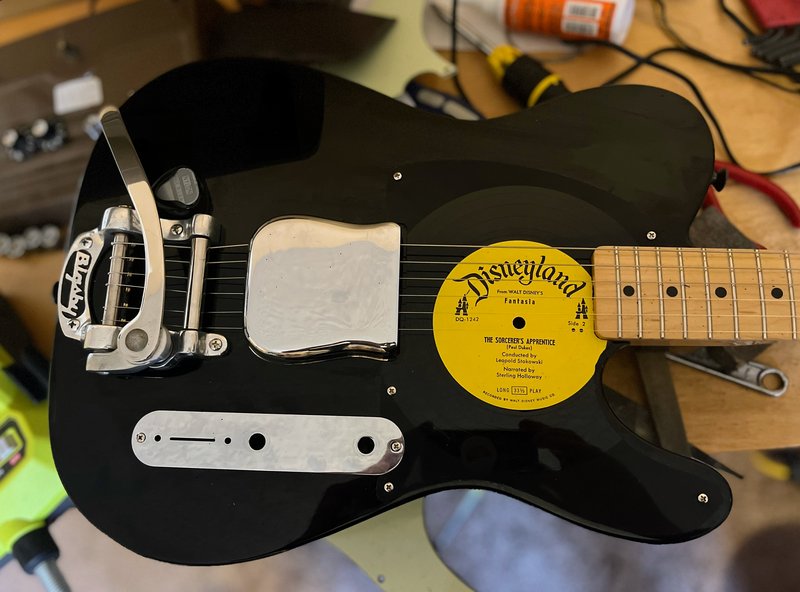 An AO 50s, blackguard , super light, don mare hot bakelights, and Gibson 50s wiring. It’s actually my #1 guitar out of all of them, not just tele. It’s a rather ugly guitar to me, but for tracking or playing live, it has clarity, and cut in a mix, unlike anything I own. The tone I can get out of it , from fake pedal steel licks, to zeppelin, is the best I have ever gotten out of any guitar. I would not use this for drop tuned metal though. But I rarely play that way anymore.

My number 1 is a toss-up between the Thinline (actually a partscaster, the body was a complete Fender Thinline Deluxe, but the neck came separately), and the lower one with the black bakelite pickguard (that too is a partscaster - CVC body, Custom Shop '51 Nocaster pickups, Allparts TMO-FAT neck). Both sport 4-way switching and Electrosockets.

If pressed, I have to say the CVC/Allparts is my absolute fave. Fretting out said:
My workhorse is my 18’ A.O

I play with the cover on (not just for photos)
Click to expand...

Nice Guitar, Great doggie. It it a Dachshund mix? I have never seen one with that type of coat.

Galen1960 said:
Nice Guitar, Great doggie. It it a Dachshund mix? I have never seen one with that type of coat.
Click to expand...

Although her ancestry is kind of funny, with chihuahua supposedly in there somewhere

There’s a color close to hers that dachshunds have called “dapple” but usually dapple is more spotty
Last edited: Jul 3, 2022

McGoldTopp said:
Got bored waiting for the post office to deliver a 4 way wiring harness, so I made a new pickguard.

my last attempt at making a 4 way harness left me grumpy and irritated, so I bought a harness for about what I paid in parts…

That is sweet! never seen a bigsby with the cover over the bridge

Did you cut a notch in the back?

I can't chose between my two teles. Got a upgraded Affinity Squier Tele and Highway One Tele. Both of them just play and sound excellent. They are just enough difference to give a little tele variety to keep things interesting.
Platefire This is mine. It's a partscaster I put together during the first 2020 lockdown we had here in the UK.
The body I bought unfinished, and shot with rattle can sealing sander and fiesta red nitro. It doesn't have a clear coat, and I guess as a result is wearing quickly, it was never meant to be relic, but it's rapidly turning into one anyway.
I call it 'Trigger'... Anyone in the UK is probably familiar with 'Triggers broom' from 'Only fools and horses'. The guitar has gone through many iterations since I first built it, just like that broom of his did

It's now got a Baja neck and tuners, a Gotoh bridge, and iron gear pickups, however it's soon to get Baja pickups as well, and possibly a Fender vintage bridge, so it's going to be more Baja than anything else. My Baja was one of the really heavy ones, but the neck is to die for, so instead of selling it I'm gradually transplanting into the red body, because it's light, and everyone needs a Fiesta red Tele 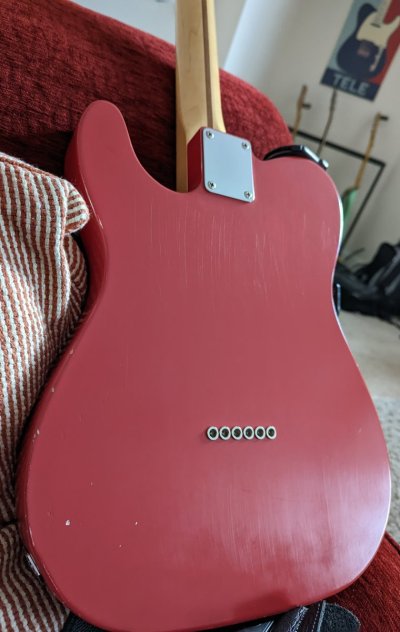 Elessar said:
This is a partscaster and then some. It's a bit of a story.

My dad died 11 years ago, and at that time my brother got his truck and I got his musical instruments. Dad was a drummer, first and foremost, but he loved playing guitar... and I got hooked on both. When I was 6, my dad brought home the Dixie Dregs album Freefall, and around that time he also introduced me to Roy Buchanan. From that time on, the Tele hit the top of my "most wanted" list (second only to my own drumset, of course).

Over the years, I bought and traded several electrics. I could never afford more than one. When he died, Dad had two Teles: a late 90s copper-colored AVRI 52 reissue and a Fender JD (Japan) Jerry Donahue Tele. My Tele at that time was also a JD, so I didn't want to keep Dad's... and yet the skinny neck on the 52 reissue was a definite no for me. I decided to sell the JD body with the AVRI neck. I kept the JD neck because I love that shape, and because all of the fingerboard wear was put on by my dad (who bought the guitar new). Guess I've now about doubled that.

I first tried a Lollar CC neck pickup to do the Danny Gatton thing, but it was a little harsh sounding for me. Then I asked a luthier friend if he'd consider modding it into a Steve Morse-style Tele. He agreed, and worked his rear off to make this happen.

The bridge is just a standard chopped Tele plate, and I opted to use the original saddles--partly because I love that sound, and partly because all of the wear and funk on them is from my dad. The bridge pickup is a used DiMarzio Steve Morse. The Strat pickup is a late 80s Ibanez S1 single coil, which I love; it pairs well with the humbucker. The Tele rhythm pickup is original to the guitar, and the neck is a DiMarzio 36th anniversary I purchased used. Miraculously, all of the pickups I chose ended up having the correct polarity, and they all balance well.

The pickguard is the only real change to Morse's original design. Morse had DiMarzio build him a blue clone in the early 80s before signing with Music Man (see photo below), and this pickguard is based on that shape. I've never been partial to the giant pickguard on his original Mongrel Tele, and I found this cool "rusty cogs" material from WD. My luthier had the patience of Job and ran several different templates to make this right.

Such a great story and such cool guitars! In the 80’s I had built two strats with the Steve Morse pickup configuration. That tele is really cool!

4pickupguy said:
Such a great story and such cool guitars! In the 80’s I had built two strats with the Steve Morse pickup configuration. That tele is really cool!
Click to expand...

It ALL makes sense now!

Is that where it comes from?… the 4 pickupness?

Fretting out said:
It ALL makes sense now!

Is that where it comes from?… the 4 pickupness?
Click to expand...

Yup, yuge Morse fan. His pickup configuration is all about extremes and getting to them quickly.

BigRiver said:
Love it, but why the lefty bridge?
Click to expand...

I wanted a warmer sounding Telecaster….that’s why the shorter scale (24-3/4”) and the mahogany neck….the lefty bridge takes the ice pick out of the bridge pickup while tightening up the bass.
Last edited: Jul 4, 2022

My #1 is my only tele and a parts caster, though I have a thin-line under construction. It's funny how the one you build usually turns out to be the best playing guitar you own sometimes. Was once a Modern Player Plus. I don’t know what it is anymore other than ‘mine’. Pickups are all GFS trash, but I like the way it sounds. 10 way Freeway switch to get all 3 pickups in series. Bigsby is from the 70’s or 80’s, the roller bar is drilled through instead of the posts. Only thing left stock are the tuners. Festofish said:
Free to join but only paying members are included in giveaways. It’s also a great way to support our good old TDPRI. I was a free member for years.
Click to expand...

What is the membership fee.?

Is it really possible to win a free guitar. ?
You must log in or register to reply here.

B
Your Favorite Telecaster Tones
5 6 7