Here‘s my number one, Rick Kelly built this from reclaimed Chestnut, the neck is also reclaimed chestnut. Neck is Rick’s DD profile trussless neck. Don Mare Zep Tones and this is the best sounding guitar I’ve ever played. Even not plugged in it rings and you feel every note played. My only tele sits unfinished (literally - I hate the finishing step). Youtube has even begun to taunt me about it! (Seriously - I bought it as a 2nd because it was asssembled for a Warmoth video. And Youtube has begun to suggest the video it appears in repeatedly to me.)

This is my one and only telecaster, 2019 American Professional totally stock and bought brand new Jan 2020, to say I love this guitar would be an understatement, it has been my number one since I got it. When I was a little kid my uncle had a tele, and then I saw the Buddy Holly Story, and that he used a tele first before moving on to a strat, anyway from that time I had always wanted a telecaster, but as I got into playing in bands and later professionally somehow I managed to go with everything but a tele, Les Pauls, Strats, a couple Carvins, etc. then finally I broke down and got this baby, and all I can say is I wished I had made the jump years and years ago. It is on every track of my latest album 2021's "Or'ange Sunshine and other songs", and it IS my go to guitar for every lead track I record !! I've included a link to my Spotify Artist page for any who would like to Hear this girl in action.......great post topic btw

Doing some math, I think I assembled this partscaster about 25 years ago so it's hard to recall the details. Fender MIJ Jerry Donahue V-neck, Fender USA RI hardware, a Warmoth (?) swamp ash body that's both light weight and very acoustically resonant, finish by Gregg Rogers and If I recall correctly Seymour Duncan Broadcaster pickups.

This one is very honestly "better that the sum of it's parts!" 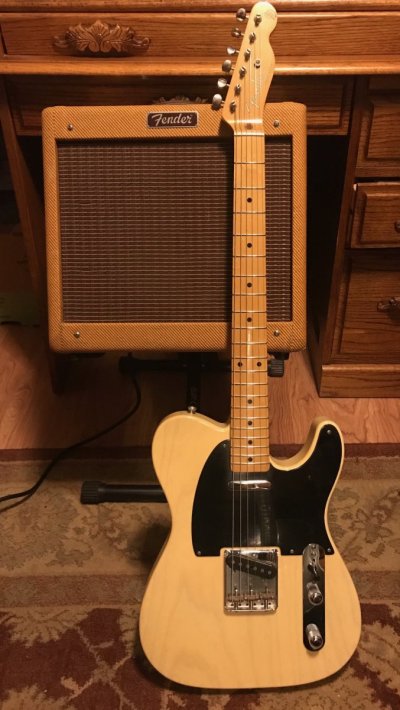 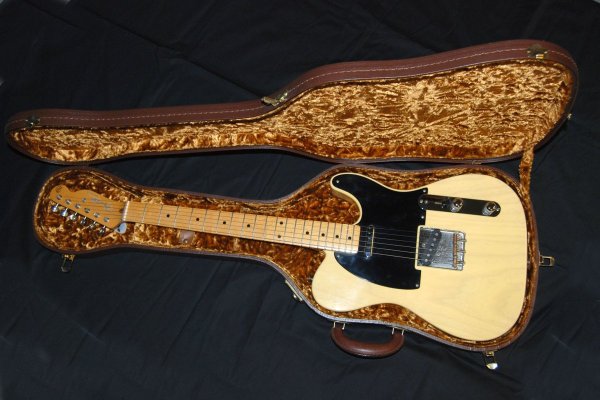 '59 Tele, owned it for 40 years, thousands of gigs, beat to death, played daily, adjusted the neck once back around '85, still the best Telecaster I've ever played, and I've played hundreds. It was a consignment. I pulled it off the rack, played a G chord unamplified and that was it. Traded it straight up for a really nice Candy Apple Red '63 Strat I had. I've recorded with it that way, just a mic near the top of the neck and it's a killer rhythm guitar sound if done correctly. Big Band, R&B, Rockabilly, Country, Jazz, even a few times with a 65-piece orchestra. Some high-pressure gigs along the way but once it was in my hands everything was gonna be just fine.

My only tele started out as a 2000 mim body with a fancy warmoth neck. Once I realized I could sell the warmoth neck for $100 profit, I got ahold of a standard fender tele neck. As for the hardware and electronics, it’s a mashup of Wilkinson, fender and squier. Probably lower standard than a lot of tele fans here but it’s been my favorite going on 10 years now

This is a partscaster and then some. It's a bit of a story.

My dad died 11 years ago, and at that time my brother got his truck and I got his musical instruments. Dad was a drummer, first and foremost, but he loved playing guitar... and I got hooked on both. When I was 6, my dad brought home the Dixie Dregs album Freefall, and around that time he also introduced me to Roy Buchanan. From that time on, the Tele hit the top of my "most wanted" list (second only to my own drumset, of course).

Over the years, I bought and traded several electrics. I could never afford more than one. When he died, Dad had two Teles: a late 90s copper-colored AVRI 52 reissue and a Fender JD (Japan) Jerry Donahue Tele. My Tele at that time was also a JD, so I didn't want to keep Dad's... and yet the skinny neck on the 52 reissue was a definite no for me. I decided to sell the JD body with the AVRI neck. I kept the JD neck because I love that shape, and because all of the fingerboard wear was put on by my dad (who bought the guitar new). Guess I've now about doubled that.

I first tried a Lollar CC neck pickup to do the Danny Gatton thing, but it was a little harsh sounding for me. Then I asked a luthier friend if he'd consider modding it into a Steve Morse-style Tele. He agreed, and worked his rear off to make this happen.

The bridge is just a standard chopped Tele plate, and I opted to use the original saddles--partly because I love that sound, and partly because all of the wear and funk on them is from my dad. The bridge pickup is a used DiMarzio Steve Morse. The Strat pickup is a late 80s Ibanez S1 single coil, which I love; it pairs well with the humbucker. The Tele rhythm pickup is original to the guitar, and the neck is a DiMarzio 36th anniversary I purchased used. Miraculously, all of the pickups I chose ended up having the correct polarity, and they all balance well.

The pickguard is the only real change to Morse's original design. Morse had DiMarzio build him a blue clone in the early 80s before signing with Music Man (see photo below), and this pickguard is based on that shape. I've never been partial to the giant pickguard on his original Mongrel Tele, and I found this cool "rusty cogs" material from WD. My luthier had the patience of Job and ran several different templates to make this right.

The body on this sucker is a 2-piece, and it's light and resonant... just over 7 pounds. I was scared to have the luthier perform such an extreme conversion, but I absolutely love the result, and I know that Dad would be jealous. Nice guitar , I knew Phil, he worked in some of my stuff - great guy . Same goes for his some Dave . Talented , great guy

Seen in my profile pic. Forget the year. American Deluxe Power Telecaster. This version has two vintage noiseless pickups with a Fishman bridge. There is a toggle switch for magnetic/piezo/both. The volume and tone knobs are dual for the magnetic and piezo saddles. Optional stereo out to split the pickups which I very rarely use. Lots of sounds. Pretty. Tummy cut. Abalone neck dots. Really a nice instrument.

Telekarster said:
Fabulous man! Is that the original finish on it too?
Click to expand...

I had the Boulevard of Broken Dreams on the wall in my flat many years ago. I'd almost forgotten it. Thanks for the reminder!

Pretty Tele by the way!

This is my #1; Samick/Valley Arts
It's my #1 because it is my ONLY Telecaster
It has Fender locking tuners on it

I had a Ray Benson model a long time ago, but never gelled with it. This one, however, totally works for me. 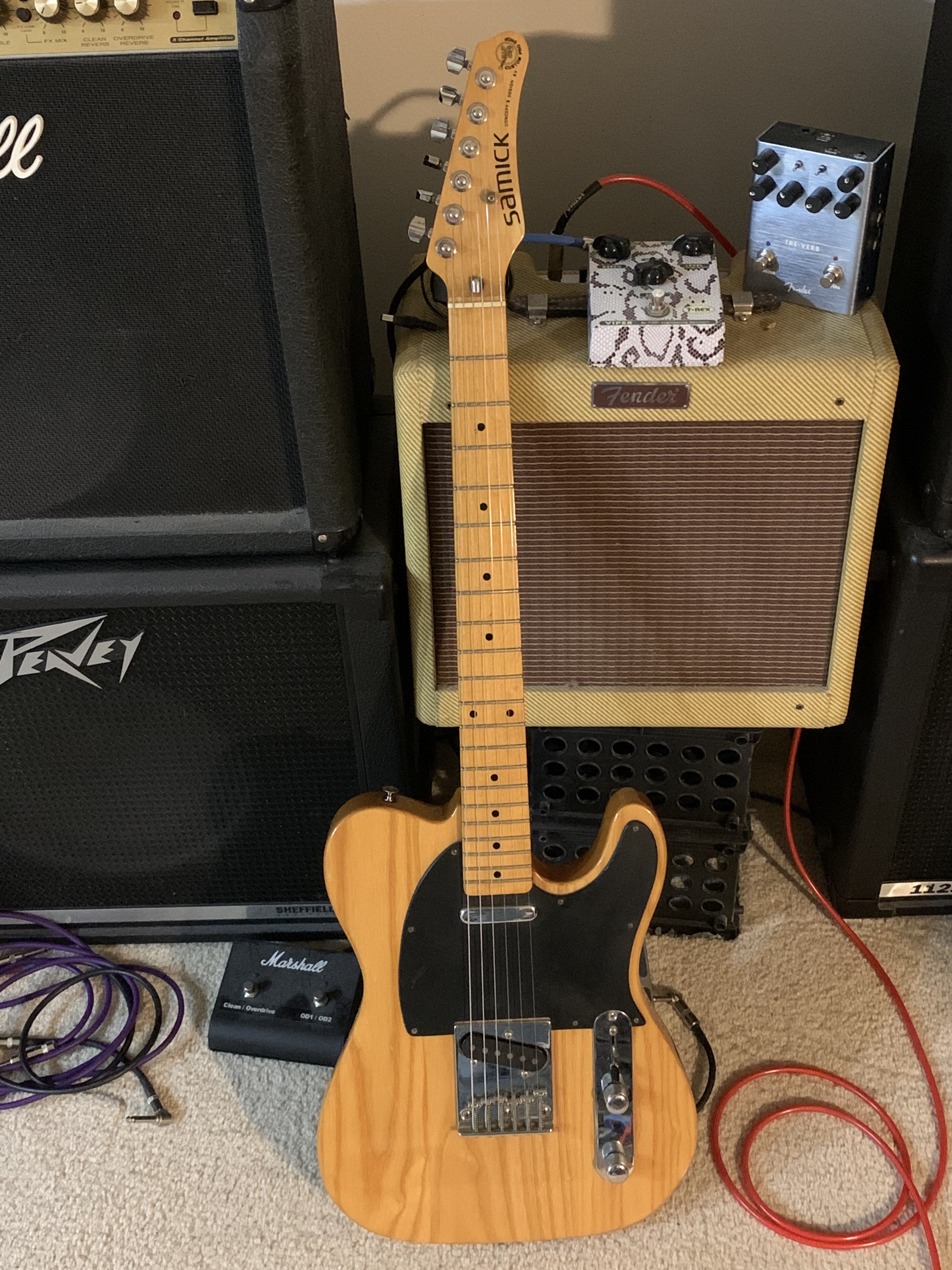 I have that same dragon strap.

Warmoth partscaster! The SPC gives me humbucker capability. I run no foot pedals/direct to amp. Pretty sweet! Nothing like sounding better than the record!

I looked up Sarah Ryan. There's some very unique, and funny things she has painted. How did the body paint come about? Knowing her? Sending the body to her? etc.
You must log in or register to reply here.

B
Your Favorite Telecaster Tones
5 6 7