You think you have too many guitars?

I know this is Gibson's video and I know people will start complaining about all those guitars sitting there and whatnot but here ya go anyways: 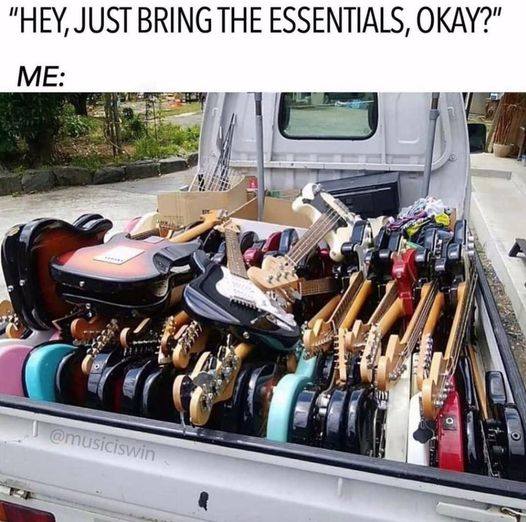 Yes, this has been circulating in other threads here. Pretty cool. I watched it the other day.

I bought 16 brand new guitars this year. Keeping all of em'. I feel like the most rational man on Earth after viewing this.

Apparently Tom Petty had over 150 guitars. In an interview he smiled and said “But you only need one.”

Rick's been at it a long time, and he got a lot of that stuff for way below what you'd pay for it now.

At least Rick plays his.

I did watch that, Rick's collection is very sweet. In the end we are just Stewart's of these things we collect and at some point they will go back out in the world for someone else admirer.

Short answer: No, I don't have too many Guitars. My House is too small.

Estimates for how many guitars Keith Richards owns are around 1,000, with some saying he's owned as many as many as 3,000.
Those numbers might be slightly exaggerated, but I think you'd be hard pressed to find another guitarist who owns more guitars than him. Even in the early days of Stones, people said he had them lying all over the place and was constantly buying them or being given them. Even if you're not a Stones fan, The Stones Gear Book is incredible for the shear variety of guitars and basses that those guys have used.

Rick Nielsen has been an uber collector for years, and I think he owned more before. At least he plays them.

StrangerNY said:
Rick's been at it a long time, and he got a lot of that stuff for way below what you'd pay for it now.

At least Rick plays his.

he also Has my lefty 52' broadcaster ,I want it back!

Billy gibbons has well over 500 he didnt know for sure they were spread out over different storage areas .

OK, other than the collection, the second most amazing thing in the video...he looks at the guitar and knows the serial number.

I read a few years ago that Keith Richards has in excess of 3500 in a warehouse he has especially for the collection - he is still buying too, recently posted on instagram about a few 590's Gibson DCs he bought in Nashville.

I think I have eighteen with me, so others are still in storage in the UK, but all are played. I rotate usage at least once a week, and keeping 'discovering' one I thought I wasn't to impressed with.
Can you have to many guitars? That's a no from me

I relate to this.

I don't gig much, but my last gig I showed up with three guitars. The other guitar player (who gigs often) brought four and said "I have so many guitars I want to play!"

You can only play one guitar at a time.

String Tree said:
Short answer: No, I don't have too many Guitars. My House is too small.
Click to expand...

I have too many and my house is too small.

You have too many when you have to physically count them to know how many you have and can never remember what is stashed where.

I'm somewhere in the mid 30's in my 1050 square foot house. The House is from 1948 and the basement is not suitable to store anything important.

I've seen this video shared a bunch of times, but I don't have an hour and a half to watch it. Can I get the quick summary? How much gear? How valuable? prize piece? etc?
You must log in or register to reply here.

People who sit while you practice - what do you sit on? Pics appreciated.
3 4 5

How many guitars should a normal person have?
4 5 6

Heard on every music interview podcast: "I'm one of your biggest fans..."