You Demanded It. Fender Heard You.

Is there a Squier version?
Would it come in different colours?
Would it be just as useful?
Probably. ChicknPickn said:
But, why even two stars?

Those are automatic stars generated by the love of Fender products!

MarkieMark said:
If I believed this made much difference, I would embed a slug in headstocks, cover it with a laminated face, and and have some kind of secret weapon/edge on the t-type market I reckon...

Well, I could try it, but then the reviews would be about neck dive most likely!
Click to expand...

Secret weapon! A fold out bayonet like a SKS....

“…adds mass to the weak end of the instrument.”

The headstock is the weak end of the instrument? Is it intended for Gibsons, then?

Be careful with using it on a Gibson. It may leave marks in a nitro finish like their stands so wrap the contact points with cotton cut out of old socks or underwear.

A fool and his money are soon parted.

I'm off to hot glue some fishing weights to my clip on tuner.

I demanded it, and Fender heard me?? You mean they decided to offer the Tele Ultra Luxe without a *******ed rib cut?
P

Then there's this approach (not recommended): 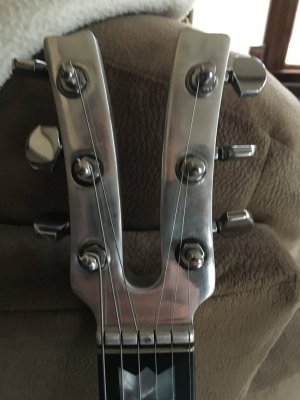 From the thread title I thought this was gonna be about a US-made, non-custom shop guitar with 7 1/4" radius.

As someone pointed out earlier a similar effect happens when changing from Klusons to Grovers. The added weight does indeed increase volume and sustain. It just does.

To what degree does it work, will vary from guitar to guitar.

In my experience with this, I have in the past removed locking tuners, or Grovers in favor of Klusons to get a different sound. I'm from the "Sustain is highly over-rated camp" and find that the inherent increase in brightness from these sustain devices or heavy tuners, just doesn't suit my taste. But it does work.

I love the idea someone had about putting a tuner on it! (if I were to use a sustain block)

I imagine if you attached one to a Gibson, a decent cough would then be enough to detach the headstock?

Sit back and wait for the padded spots to eat through that nice nitro finish!

I remember the original.
A friend and band mate at that time worked at our local guitar shoppe.
One afternoon he tried hard to get me to buy one.
I know I never saw one on any of his guitars.
I’ll be honest, I mentally backed away from our friendship a little bit because of that.

GeneB said:
Be careful with using it on a Gibson. It may leave marks in a nitro finish like their stands so wrap the contact points with cotton cut out of old socks or underwear.
Click to expand...

Good call… but given current ‘relicing’ trends this might be desirable

I just ordered a set of custom built Grover knock offs chambered and filled with spent uranium. I can't wait to hear the difference

JL_LI said:
A fool and his money are soon parted.
Click to expand...

Just ordered three. Wait…
You must log in or register to reply here.

Wisecracks about job choices: what have you heard?
3 4 5

The Best Guitar You Never Play

You are a Star