Heard some great clips of this fuzz pedal. Found one in Seattle and ordered it.

Anybody using one. I'm gonna plug a Tele into it into a Vox AC15HW1.

It should sound good, after all, it's a big muff clone.

I'm also finding out that I've yet to discover a pedal that sounds bad coming thru my VoxAc15H1. Some better, but none bad.

Trouble is, I bought this pedal while on vacation in Seattle at The Mad Ape (thanks Matt), and now I have to wait 10 days before I get to play with it.

I think I just hijacked my own thread? 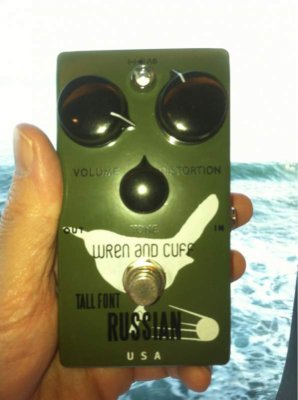 Here's a quick pick from somewhere in the Pacific Ocean.

Congrats on the great pedal!

From all accounts I've heard it sounds identical to the original Sovtek Green Russian Muffs.
I bought a used Sovtek green Russian about 18 years ago and lucked into it being one of the "tall font" ones. It sounds great but I've been considering buying a Wren and Cuff just because the components are better, the footprint is smaller and you aren't gigging a "collectable."

I've found my muff sounds great with my Vox AC30CC2X. I think the "tall font" circuitry works better with Voxes. It's a little less flabby and more focused than other muffs.
It should sound killer with your AC15HW1!
I

I don't have a Wren & Cuff, but I do have an old Russian Big Muff.

If it sounds anything like my old Russian Muff you'll be very happy.

Great pedals, well all Muffs are great.
B

I love mine! I used to sell the old Sovtek ones, and they were really inconsistent. I don't run mine all out, just to give it a nice fuzzy thickness. I have been running it in different orders with the rest of the pedals and have been getting some cool results.

Been plying with it for over a week now-very good pedal. It really fattens up my Tele. Just sounds big and I love it with my Tele in the neck position-yep you heard me, neck position. It jus sustains for days. Great for solos.

imsilly said:
If it sounds anything like my old Russian Muff you'll be very happy.
Click to expand...

Yeah, I had an old Russian greenie that was great. When it started falling apart, I rebuilt it. After owning or scratchbuilding too many to count, nothing really equals the sound of a *good* old MIR greenie.

I could dime the Sustain control on mine and it would only give about 60% of the gonzo of my mid 70's ram's head. Very dark and smooth. A friend of mine who hates fuzz really liked that pedal.

Kinda cool that companies are building all these replicas of different era Muff flavors, since folks tend to favor one type more than others. Also neat that there are now all of these "fixed recipes," since the original EHX's were anything but consistent...

You can even get the op amp chip Muff replicas now, which generally makes me chuckle. Most folks wouldn't touch them until the news finally broke that Corgan used a "mongrel Muff" for the classic Pumpkins albums.

Which reminds me...if you want something that is mild like a MIR Muff and uses an op amp versus transistors, the Kendrick Buffalo Pfuz is pretty neat (if you don't need a tone control). The plus is that the circuit is almost as simple as a Fuzz Face, and the op amp means that the noise floor can be pretty low (especially if you don't use a LM741 like the BP did).

The tone control on the Wren is very useful - not sure I could go without it. Also it seems to be a fairly quiet pedal.
You must log in or register to reply here.

My Transparent OD Quest is Over ~~ Twist Ending!