Would you consider a Les Paul with a repaired headstock break? (And maybe a cool coincidence!)

I would not personally but you know what you are comfortable with. Good luck!

I definitely would if the price is right, and I think they are asking a pretty fair price.

The most important questions are how it plays and sounds.

if the price is right i would, because that spot was weak already and with good glue it will be stronger.
but i am lucky not to like the bridge construction of these LP/SG guitars ;-)
but i have a L6 copy, long scale, and maple neck. still don't like the bridge but the neck is strong

If I was pretty confident I was going to hold on to it-sure. If I was considering reselling it some day-NO.

Headstock break, not a problem.
As others have said..... it's probably stronger now, that it was originally. It would have to be at an easily resellable price and nicely repaired. So if it's normally a $2k guitar I would want it at 1/2 or 1/3. But really, I can't get myself to buy a broken neck guitar for more than $500-600.

If it was some rare ish guitar that I'd always wanted with a clean break AND at a remarkable price, I would likely do that. Like a Byrdland or L5 or something. But LP? Nah, there are some great Epi LP's out there cheap.

yes, although the price would have to be real good....which seems pretty obvious.

I broke the headstock on a '81 Hamer USA Special decades ago and the repair was done very well and it was never a concern that it was structurally or tonally worse off. I don't have the guitar but I didn't move it along because of the break. I traded it because I was cheap and short sighted!

I had a 335 with a headstock repair I wish I still had. If done correctly it is still a playable guitar. That looks like a clean break. However, as others say you may not recoup your investment if you want to sell. Luckily I did. But it is an affordable way to get a Gibson. Im not familiar with currency exchange right now but my general rule is a headstock break devalues the instrument in half if I am going to purchase it. I would go down from there if possible.

If the repair is solid and properly executed, it wouldn’t stop me. Not even a little.

I bought one of mine with a broken headstock, fixed it, and it's been stable for years now. Like I'm going to pass up a $200 Les Paul?

it wouldn't put me off if it the repair was done well and you are already satisfied with the repair - happy days. the swiss franc is mostly on a par with euros, so an offer of 900-1000 is fair, imo.
it doesn't seem like you've played it though? i wouldn't buy a guitar that i've never played before as a general rule.

I bought my ES-335 with a repaired headstock for $1490 all in. About 2/3 the price of most used listings at the time. If it's a well-done repair and the truss rod isn't affected, I think it's a great way to get a deal. 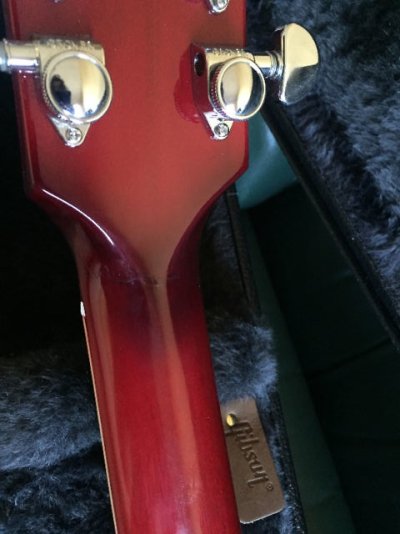 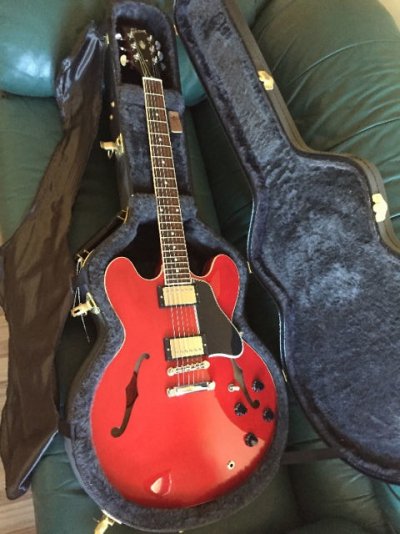 I have a mid 70s Ibanez Flying V which I bought around 1985. The neck had been snapped at the second fret and professionally repaired and in the almost forty years which I have owned it I've never had any kind of problem with the neck. In saying that it's a bolt on so I have options available which aren't open re Gibsons.

That's a good repair and a solid one, but not a perfect job. I think that break could have been be made invisible since it's so clean. That makes a difference to me not because of stability -- I'm sure it's absolutely solid -- but because I don't want a little voice saying "headstock break!" everytime I see that crack mark. It soulds like a fine guitar at a great price. I would do it. And I would finish that crack!

marc2211 said:
I've been looking for a real Gibson LP for a long time (many years), and found out that one model I really like is the Les Paul Standard Classic Premium Plus from ~1995. Each one I've played has been really very good.

I found a perfect one in a local store just before the lockdown, but the price was (very Swiss) much too much for what it was imo - they wanted ~2700CHF for a guitar that was very well used to the point of a good few dings, play wear on the back of the neck, a good bit of fret wear etc. (Reverb recommended ~2200CHF for a mint one). The top however was pretty spectacular and it was *wonderful* to play, perfect sound, amazing feel and action. I offered 2400CHF on the day but the store declined.

I really felt it was much too good an instrument for my guitar playing ability, and also expensive in that used condition. My wife convinced me to go grab it as another may not come by any time soon, and sell a few others to cover the cost. By the time I went back 2 days later to just pay what they wanted, it had sold - it was the one that got away! Ironically, Reverb now lists them as 4K+ for good condition!

Anyhow, yesterday I was browsing a local sales sites and found a LP that looked very similar (the one I saw also had a similar semi 'chevron' type grain by the bridge - what are the chances?). At first I really thought it was the guitar I missed out on, but reading the advert further it's not the same guitar, being a 2005, but is in the same 'plus' lineage. It's being sold with with the original hardcase, but no case candy or labels anything.

The guitar is clearly noted as having had a headstock break, with the fix done at the same store I saw the original guitar I saw (the biggest and most famous store in town). The asking price is vastly reduced from what I would have expected at ~1200CHF due to the repaired break (I think that it'll drop lower as it's already been reduced once).

Reverb lists the price for a mint one at ~2500CHF, so this is about half price.

Normally I'd never consider a repaired headstock guitar, but for this model (assuming it plays well and is solid), I'm tempted. The store is the most well regarded in the region, and has been around for 30+ years - they do all my luthery work already, so I can be pretty sure the repair work was done well.

Just wondering about people thoughts on this - would you consider it? What would be a fair price? Or even cheap would you give it a hard pass?

A year ago I would have said no. But in the last year or so I've been playing a lot with a guitarist who has made a good living by just playing and teaching guitar for the last 30 years. He has a Goldtop that had a repaired headstock when he bought it 20 years ago. He says no problems with the guitar as long as he's owned it and I respect his experience and knowledge on the subject. So yes, if the deal was right, and it looked like a good repair, I would buy a guitar with a repaired broken headstock.

If it's a good one with a good repair, yes, it would have to be one I knew instantly I'd keep.

I suppose, but I'm never going to be in the market for a Gibson LP. An SG, maybe who knows, I'm not anti Gibson though, and this is exactly why I don't buy one. I cannot knowingly sink money into a guitar that can be damaged by merely knocking it off it's stand (etc..). JMO though.
Last edited: Jul 1, 2022
D

1. I generally pass on guitars with history of a broken headstock. I have no idea how well it was repaired and I have no interest in having my tech do a followup repair at some point in the future. At this point, and with over 50 guitars sitting around here at the moment, I have none that had a broken headstock.

2. I'm long past getting all squinchy about a *Gibson* Les Paul (I have a small stack of them). My first guitar was a Gibson ES-335 (still have it), purchased long ago when it was a quality guitar and the offshore brands were toys. These days I can spend $200 for a used NotAGibson guitar and another $300 to have it Plek'd and set up correctly, and the result is a better guitar than most $3K Gibsons I can pull off the wall in a GC. There's some really good stuff out there that doesn't have The Logo on it.

I’d buy it and play it in a second
You must log in or register to reply here.

Help me choose my next guitar
2

Amp issue two days before gig...what would you do?
2