it was Candy Apple Red

As with painters of various genre, you will always need black and white. Telecasters are the
black and white to guitar players. If you take take one guitar to the gig, take the Telecaster.

I think I might be a little resistant to coercion like the OP. I grew up in Tennessee where Country Music was king and you had to have a Martin acoustic and a Fender Tele or you were no-one. I wanted them but couldn't afford them and at some point in my being "no-one" I rebelled. I've been a Gibson guy ever since.

What changed things was become a studio player and needing the Tele in the palette. It was as simple as that. I had already gotten a Strat. The Tele was actually a late acquisition but I discovered that its fixed tailpiece made bending far more comfortable than on the Strat. Surprise! 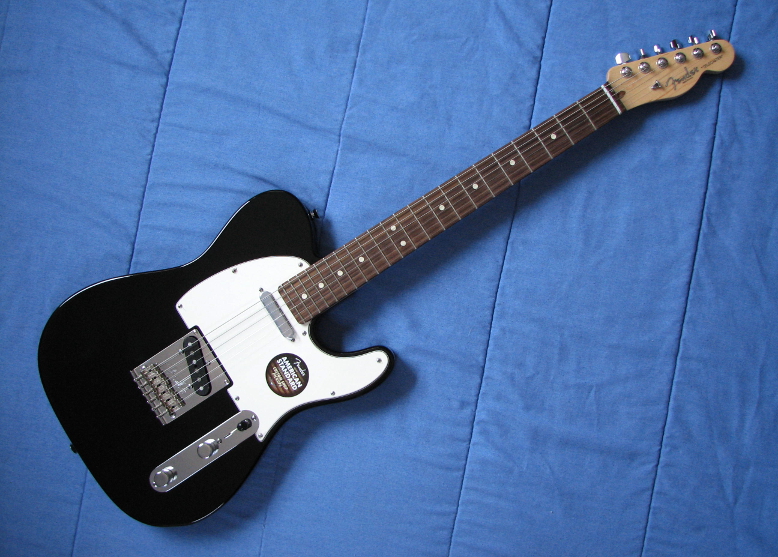 Jazz to Twang by turning one knob. Easy to mod. (I mod everything)

The only reason I have one is because I bought some random parts. It's the only one I have but it happened to come out nearly perfect.

Because Les Pauls are big, fat and bloated*, SGs are too insubstantial**, Strats are all fur coat and no knickers***. The Tele is the ugly duckling / underdog.

Seemed like in the 60's EVERYBODY had a Strat and I just didn't want to look like everyone else.

Back in those rock and roll cover band days (country wasn't yet cool yet), if you walked out on a stage with a Strat everybody who supposedly knew something about rock music thought you were going to do Clapton (Yardbirds, Cream, etc.), Boxtops or Hendrix songs. Rolling Stones - back then Keith Richards was into Les Pauls. If someone had a hollow-body there was sure to be British music in there. If you had a Jaguar in the band you were supposed to play Beach Boys music (although nobody covered them because of the vocals). If there was a Rickenbacker in there somebody thought they needed it to sound like the Byrds or the Beatles.

Walk on with a Tele back then and nobody seemed to have a clue.
O

Curiosity mostly, it's a quite startling design in a historical perspective.
L

I always lusted after Strats, but my first real guitar ended up being an early 70's Tele. I did eventually migrate to Strats and would probably first grab my favorite from a burning house. But if I had a free hand the Tele would come with me too. I play differently on a Tele, maybe it's the fixed bridge vs floating trem. I often find I'm happiest with my recordings done with a Tele. I'm glad I have the choice.

Simple as an anvil, solid as the rock of Gibraltar and, with the right skill set, you can play anything with a Tele.

Well I've never been much of a whammy-barista to begin with, and stuff like Lesters are just too fiddle-y for me with their excessive neck angles. So it just happened gradually, but nowadays various Tele versions are practically the only guitars I play. I just don't need anything else, except for the Norlin pictured in my avatar for a wee change every now and then...

PS. And oh yeah, regarding the "why" part. Well because Teles are versatile as hell, and they just fit like a glove. The best solidbody ever invented!

I use my Strat for a lot of things, my LP for specific things but my Tele is the only one that can do everything...

Kandinskyesque said:
I was talking to my neuro guy yesterday around my neurodiversity and we got onto the subject of my opposition to things that either are or become popular. It's always been a natural inclination of mine since a young age: an avoidance of 'the done thing' and the risk of being labelled, which then requires meeting certain expectations.
I was accused of being odd or defiant when I was younger but I've concluded it was about deriving some agency while living a life with an until recently diagnosed invisible passenger.

The session got me on the drive I go afterwards (to process my neuro-psych sessions) thinking about guitars.

Why did I chose a Tele ?

There was Joe Strummer who was a hero of mine and played a Tele but he wasn't one of my guitar heroes. My guitar heroes: Mark Knopfler, Mick Ronson, Stuart Adamson, John McGeoch or John Martyn didn't use them.

They were never popular among my peers, LPs and Strats were. Teles were considered a bit meh. Neither were they popular in the genres of music I played so I conclude there was some defiance/opposition to the popular at first.

Then of course, I developed my own sound so it became integral to my playing.
I've flirted with other electric guitars but around 2000 made the admission to myself that the Tele and me were bound. A few years ago a friend introduced me to a fellow guitar player with "This is (real name),he plays a Telecaster", so it must be part of my identity now.

I can't think of another solid body electric guitar, I would like to own, possibly a better custom built Tele but nothing else hit the spot.

I'm sure every Telecaster player has their reasons for owning one.

What's your reason for choosing the Telecaster?
Click to expand...

I think that as human beings, especially in our early years (1 - 20 years old), we are like ducks and all animals: we "imprint" on the first things we encounter, and those things become our familiar, comfortable, "go-to" thing. I think it happens visually and also in an auditory sense. For me, growing up, I liked the music of certain guitar players, and I found that all of the greats in the '50's and '60's started with Telecasters. Why? Because there were really only two solid body guitars to speak of: Telecaster and Les Paul. As you know, the following players started on Telecasters or Esquires. Some moved on to Strats and Les Pauls, but when I listened to them, and fell in love with their tone, it was "Tele tone". My ear and mind subconsciously "imprinted" on Tele tone I guess. The Tele greats were (and the list speaks for itself):
BB King (long before "Lucille")
Albert Collins
Eric Clapton (Yardbirds)
James Burton
Steve Cropper
Buck Owens
Jeff Beck
Mike Bloomfield (before the famed Les Paul)
Jimmy Page (before the famed #1 Les Paul from Joe Walsh)
Bruce Springsteen
Chrissie Hynde
David Gilmour
Robben Ford
Roy Buchanan
Sheryl Crow
Andy Summers
Walter Becker
Mike Campbell (Broadcaster!)
Joe Strummer
Jeff Buckley
Nancy Wilson
Joe Walsh
Jonny Lang
Kenny Vaughn
The Telecaster rules! As Kenny Vaughn says: "The Telecaster is the 'Swiss Army knife' of guitars...if you can take only one guitar with you, it should be a Telecaster, because it can do anything."
Last edited: Apr 28, 2022

my first electric was an Aimes telecaster copy. I got it because I thought it looked cool, it was kind of a pos, when I think back about it. Later I started playing tele's because they are such great guitars i.e. stable, great sounding and they got me out of Strat-land. Even later I started playing my Esquire all the time because it's pure, so so refined, mainline addiction, like I imagine high wire walking must be like.

I enjoy the Simplicity of it.

Wanted a Lester. Didn’t have the funds. Found out about partscasters.

Now have five T styles, none Fender. And I did eventually get a Lester.

Because they sound good.
A

I always hated double cuts and liked the sound.
You must log in or register to reply here.

The Telecaster: From maligned to much loved
5 6 7

Sunday at 12:54 AM
Telekarster

Ever Have One Of Those Rehearsals?
2