Who is able to run their amps open at gigs?

Our stage volume is pretty loud. Our drummer hits hard and we have a lot of punk-influenced songs. We’re not a quiet band.

Though, I do have a Tone Master and can go direct/low volume if the venue does require it. But typically I run it around 3 or 4 (where it’s still very clean as a pedal platform) and let the PA do the rest.

RetiredUnit1 said:
And of course you know I was kidding, several of my best friends have made their living in pro-audio in one form or another. Some have been in many forms!
Click to expand...

Absolutely you were kidding, and I never thought about entertaining any time of indignation . But...I think there are players out there who think I exist for them to hate, then both of us have a bad night...and everyone in attendance knows it.

Back in the day, I ran my POD into a Blues Deluxe (40W 1x12). But the amp got so LOUD so fast that I never ran it over 3. Yeah, the POD acted as a pre-amp and provided some boost, but that big heavy Fender was not a friendly beast to run wide open - let alone around the house. Much happier with my Blues Cube Stage (60W 1x12) because it has a Wattage selector switch that goes from whisper to rebel yell. One amp to rule them all!

I only used two amps over the last 8 years I gigged. The Marshall had to be cranked to get the right tone, but we mic'd everything. For a smaller venue, I folded an army blanket over twice and covered most of the cab. It kept the volume down (and on the stage). When all of the venues got smaller, I used a blonde bassman and a 1X15 cab which gave me great tones without being cranked.

I'm not all that experienced a gigger, so the only amp I have really opened up completely on stage was a 5 watt champ clone with a Cannabis Rex speaker, small bar no mic. I have done that a few times. With a drummer it had to be flat-out and didn't sound its best to me - or it wasn't the sound I wanted, I should say. Backing a single acoustic guitar though it was just amazing.

But even a blues junior needs the MV turned down a bit at the typical gig I play. My AC30 didn't get any kind of a workout at the last gig, I play it louder in rehearsal sometimes. Thinking of selling it honestly, even though it's possibly my favorite amp sound in the world.

It's one (more) good reason to go with a modeler - I can get the sound I'm looking for at the volume I'm looking for, the two things are not interdependent.
A

I play my DR at 5 - 6 where it just beginning to overdrive. For indoor gigs this is often too loud and then I turn the amp around, Roy style. Amp is always miked. I refuse to become an 'in-ear smartphone/ipad band'. When that becomes the standard, my gigging days are over.

Small bars the two bands I'm in with my 83 Superchamp, gain on 6, master on 5. That's riding guitar volume. Modern speakers are so efficient 15 Vox watts with a Blue you're on 4 master volume. What you once needed 40 watts you need half for.

SF Princeton, pretty much always end up running it at least at 7-8, often cranked.
L

Beebe said:
In my experience, the drummer sets the volume.
Click to expand...

This is true. However if you have a loud drummer turning up to match him only justifies him to keep banging away.

I don't turn up and when they complain they can't hear me they start to back off to a reasonable level. I don't like loud at rehearsal or on stage, never have.
5

Les H said:
This is true. However if you have a loud drummer turning up to match him only justifies him to keep banging away.

I don't turn up and when they complain they can't hear me they start to back off to a reasonable level. I don't like loud at rehearsal or on stage, never have.
Click to expand...

This is what I have always done. I don’t like people leaving in pain , because we’re too loud . “Ken, turn up” no ,YOUR too loud my friend

I no longer play out. Back when I did I was able to run my Vox style boutique amps, (30 to 38 watts), at there sweet spot which, depending on the amp, ranged between 6 and 9 on the volume knob. Note* Once you get to 6 the overall volume basically levels out and the rest of the range just adds gain /distortion / sustain depending on the amp in use. I wonder how much the "keep the volume knob down" amp police get as a kickback from pedal manufacturers? I not dissing pedals. I love pedals. I just wish a wonderful amp could still be played through at it's sweetest settings. Turn down the house PA and allow the amps to fill the room.
B

I think most of the "turn the volume knob down police" simply don't want you playing so loud their ears are still ringing two days later. A 30W tube amp with a volume full up is going to damage any unprotected ears within 10 or 20 feet of the amp.

It’s a rough issue. Big amps turned up don’t work anymore. It’s a double edged sword. I both miss those days, and don’t miss them at all. They’re why I’m half deaf.

Small amps turned up generally sound like garbage. They don’t have that cranked sound of big iron. They sound like they’re strained and on the verge of blowing up. Not what I want to hear.

I do pretty well with my little Engl. it’s a loud 15 watts, and I run it through a pair of efficient 1x12 cabs. It’s also got a highly functional master volume. To get it at its best, it’s still too loud for some of the rooms I play these days. But at least it thumps pretty good.

I’ve been using my new Bandit a lot lately. On 1/4 power. Because it’s almost as good, sounds better actually than a decent tube amp being totally neutered by a neurotic sound tech. It keeps the bass when it’s quiet.

I see retirement in my not too distant future. Even though I have no money and don’t know what else I’d do. When real amps and monitor wedges go away for good, I’m out. But what the hell, it’s been almost 36 years and it was a good run. I’ve always said when it stops being fun, I’ll be done. It’s getting closer every day.

OP- The Maz 18 is a WICKED loud amp. Everything Z builds is not comparable to anything else of similar wattage, in my experience. And I’ve played a lot of Z’s. They’re built 15 minutes from my house. I’ve never been able to afford one until recently. Now I can get one, but I’m asking myself why I would? Cause I don’t do gigs anymore where I could really get the best out of it.

I don’t even remember what the point of this post was anymore. I’m going to bed. Lol.

I’m fortunate to still be playing all original music in places people go specifically for music. That means volume is often not as big an issue as it is with a cover band playing a sports bar or someone on the theater circuit. That said, I’m no longer hauling 100w of mesa mark I around And turning it up. I’m going for more dynamics these days. now it’s either the Bandmaster or the Bassman 20 + 2x10 and sometimes I take the 5E3 clone out on an amp stand. Depends on where I’m playing.
A

All this should be a clear message to speaker manufacturers to develop low-efficiency versions of their most coveted models. I guess low efficiency speakers are the future (and lightweight drum sticks).

Put bunji cords on drummers arms and all is well.
6

InstantCoffeeBlue said:
SF Princeton, pretty much always end up running it at least at 7-8, often cranked.
Click to expand...

To be fair - the (non reverb) Princeton is about the lowest-volume amp Fender ever put out...
I could (almost) crank it in my apartment 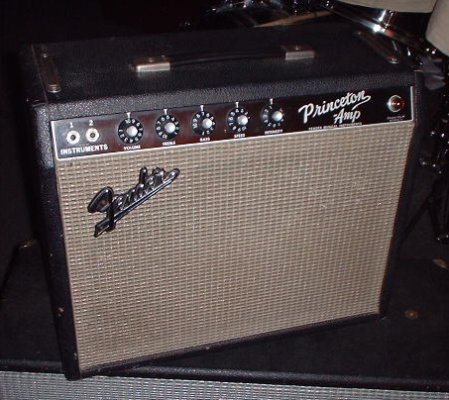