Who else counts how many things are plugged together just for your rig?

I had a large (10-12) pedalboard, but now I run smaller ones (5-6), and I have specific boards for each of my amps. I swap out pedals on the smaller amps (Blues Jr. and Valve Jr.), but I like the set up I have for my Mesa MKIIB. They are mostly modulation pedals, as my amp produces lot of distortion.

When I was playing Praise and Worship for a mega church, every week was a different combination of pedals. They wanted their music to be "just like the CD" so to speak, so I had one of most every effect type. I also gave lessons at the time and I had a series of lesson material that went through most every kind of effect type. So, it was double helpful to have many pedals to choose from working the guitar this way. Then I use small zip ties to hold the patch cables and PSU cables tight against the bottom. I bought a tube pack of the small zip ties at a computer store for $2.00 for 200 of them. That's plenty enough zip ties to change the pedals every week as needed to do the "play it like the CD" thing which every week, was 3-6 new songs all with different effects.

This link to Sweetwater has both, the cable anchors, and the Zip ties. But you can shop around and get both items cheap.The zip ties in that pack are way way too long... The ones I use are fairly short and not over-kill for size. 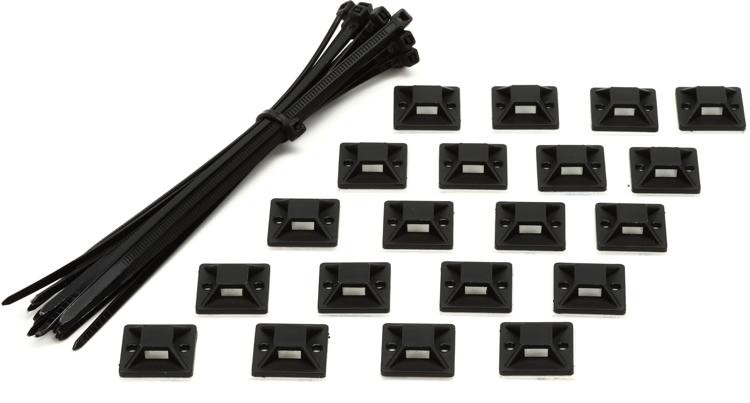 Here's what the underside of my board looks like (using a OneSpot and one wal-wart on this incarnation) No matter which direction or side of the pedal has the power connector, with enough of the anchors, I can keep the bottom clutter free every week.: I never counted my pedals, but I was concerned about current draw. Here is a good site that has a large collection of pedals and what milliamps (mA) of current draw each has. Or, most every pedal has a manual these days, and most manuals state the current draw.
http://stinkfoot.se/power-list

My OneSpot produces 1,700mA of current, so if the pedals are overdrives, boosts, and such, they usually only eat up about 10mA per pedals. As the pedal leans more toward digital processing (delays, flangers, etc) the current draw per pedal gets more thiirsty.

For an all-around PSU I spent the extra bucks on the Strymon Zuma. The Strymon PSUs put out 500mA per output, whereas the very popular Voodoo Lab PSUs only put out 100mA per outlet. With one Daisy Chain cable, I can power up several pedals off of one of the Zuma's outputs... 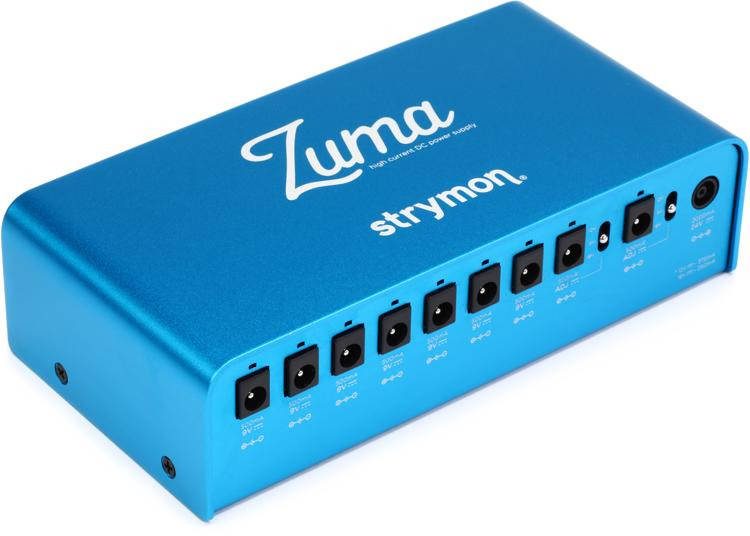 Lot's of options for Daisy Chain cables these days:

Plus, the Zuma is quiet as a mouse, even when using more than one Daisy Chain cables.

I have had boards with 30 pedals, all powered by one Strymon Zuma. ( more or less as a mad scientist, trying to see how many I could fit on one PSU... LOL)

I am NOT a multi-effects guy, and you'll never see me buy one of the many iteration of the Line 6 HX boards (they have a bunch of the same thing over and over for many different price points). For one, I HATE reading manuals. And, the other guys at church had these boards and said it would take 2-3 hours when they first got them, just to do the patches for ONE song. I'm old school, and have been playing guitar since 1975. I just like single pedals for each effect.

My favorite brand of pedal(s) (though I never met a pedal I didn't like, LOL) these days are the Source Audio One Series

Source Audio makes pedals for the rest of us that are NOT into techno boards and War and Peace sized manuals. Each of their pedals are digital, so for the snobby analog-only guys, they aren't analog. Being digital and plugging them into your PC or MAC, Source Audio has a free Neuro Desktop editor. It has a very user-friendly GUI interface. Plus, buy one effect type (like their L.A. Lady Overdrive) and the editor allows you to create presets from their entire OD/Fuzz/Bass OD lineup. With the editor and the LS Lady, you now have 50 different algorithms (think of it as 50 different overdrives, fuzz pedals, distortions, and preamps... for the one-tie purchase of $199.00 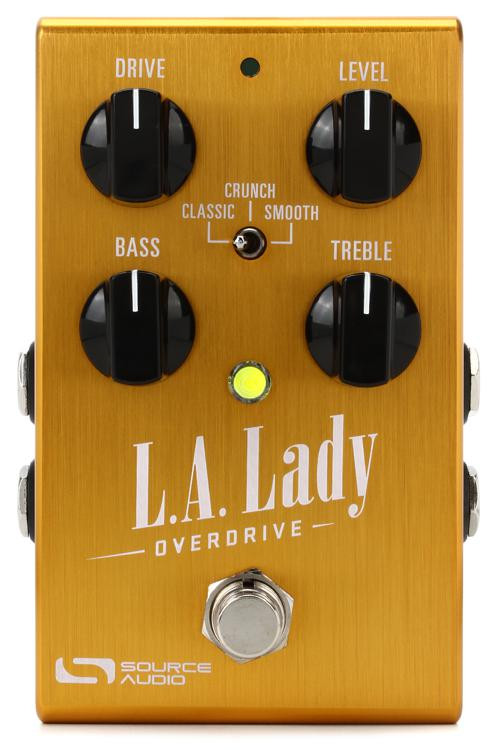 So at the mega church, here is how it went every week:

- On Thursday this week they handed out a playlist of between 3-6 songs (sometimes more).
- We had the rest of that week and all of the next week to learn our parts
- That following Sunday the musicians met face-to-face in a green room at each church (they had 3 locations back then, even more now) for the first time. They had a very large pool for each instrument, I think there were 25 different guitar players that rotated in and out. We never played with the same musicians more than once as a group... AND there was NO REHEARSAL during the week. You either learned and memorized your part during the week... or some would fall flat and not git-r-dun, and they would not be asked back for another service.
- At like 6:30 in the morning we met in te Green Room. We'd go over the songs and the singers would work to get their harmonies right.
- Then out on the stage for a sound check. All of the amps were far away back stage in a isolation cabinet, no amps on stage at all. No wedge monitors. Just Aviom in-ear monitors, and each musician and singer had their only pedestal mounted monitor mixer
- We'd do the sound check, then one pass start to finish of each song.
- Then back to the green room, the count-down timer for the service started at 10 minutes before service time, and at exactly wen the second hand passed 12, we started playing

Never counted my pedals... I just used whatever effects each week's recordings utilized, so a different PB every week.
Last edited: Dec 4, 2022

Edit: I just looked down and counted.

You're not sending signals to the moon and back. Other than wireless items, the sounds you make on the instrument are virtually instantaneous coming out of your amp. If there's any measurable delay in the signal path (other than a delay pedal) our ears and brain can not detect it.
You must log in or register to reply here.

Why terminate circuit ground(s) to chassis, rather than directly to mains ground point?
2 3 4