When you must really, really love your cat...

Name: Angus
Crimes: Silently judging my playing, insisting on fitting himself into every available box including the one my Ernie Ball volume pedal came in. Masmus said:
One thing I have noticed over the years is a large number of 70's vintage black Peavey amps that have cat spray stains on them. No Marshalls, Fenders, Mesas etc... just 70's Peavey.
Click to expand...

Are you sure it was CAT piss?

Amps are just stuff. Even Silverface ones...... They're so damn cool and unique in personality but my lungs lock up around cat hair and I'm a dog person first.

Dogs are like that one buddy that always wants to hang with you.

Cats are like that girl you date on and off, and the relationship is always confusing.

Sparky2 said:
I want a cat, but my wife claims to be allergic.

I hate to see folks get a cat who might have to get rid of a cat if there's an issue.

That said, the Bengal breed of cat (which is typically four to six generations from an Asian Leopard Cat father) is known to be less allergic due to it's different constitution (in comparison, the typical domestic cat is prob 10,000 years and untold generations from it's wild ancestors). The result is that it has a much different "pelt" compared to a typical cat's "fur". Also, they love water so you've likely to be able to bath them without taking your life in your hands, which can greatly help with allergies.

But, allergies are a very personal thing and "who knows".

If you're serious about wanting a cat, I would suggest visiting some small breeders with Bengals (only). If your wife can stand being in a small breeders house with a half dozen of them as residents for a couple hours, she's probably OK with them.

I'll also add a caution though: If you've never had cats, starting with a Bengal is not advisable. They are super friendly, but at the same time have a number of behaviors what highlight their closeness to wild ancestors. They are very energetic, active, fearless, loud, demanding, social. They are not typically lap cats. Most breeders advise getting two so that they can entertain each other. They'll also cost you a couple MIM Tele's up front for a pair (plus typical vet and care costs later). But they are a barrel of fun.

You know, we may be looking at this wrong…the cat may have been making a statement about the amp itself; I had a Silverface/Master Volume Twin Reverb that I detested, too.. When my amp had Tolex on it, there was some cat damage. A bit to the speaker cloth, as well. But it was never as much damage as what I did through handling over the years. As I grew older, I grew more careful. Now the amp has no Tolex, and in 15 years or so, the replacement speaker cloth has suffered no damage. Don’t even ask how many cats have co-existed with this amp. 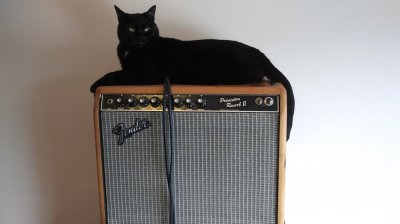 rstaaf said:
Much easier to love a declawed cat She guards the guitars under the bed.

We live in an area with too many critters that find cats tasty so she is an indoor cat.
Click to expand...

It is equal to removing a human’s finger tips.

rstaaf said:
Much easier to love a declawed cat She guards the guitars under the bed.

We live in an area with too many critters that find cats tasty so she is an indoor cat.
Click to expand...

Our indoor cat is de-clawed as well. No shredded furniture or amps! He stays indoors and is a healthy 15 y.o. kitty.

Lone_Poor_Boy said:
Dogs are like that one buddy that always wants to hang with you.

Cats are like that girl you date on and off, and the relationship is always confusing.
Click to expand...

Me, I prefer independently minded cats and folks over utterly devoted clingy beings! I just wanted to show you this little thug. Here's McLovio, taking on the role of speaker of the house: clingin_on said:
I play with my little buddy every day because he still has his animal instincts. I view that as a basic responsibility of owning a pet.
Click to expand...

Absolutely right! Playing is not an option, it is imperative.

I have three cardboard boxes upstairs. They are boxes within boxes. Georgie goes bonkers over cardboard boxes. I've never tossed any toys into them. Until today. Box 1 is the largest (more thana square foot). It sits next to Box 2, which used to sit inside Box 1. Box 2 held Box 3, which is fairly small (7" x 7"). It sits on the same line as the others. It is horizontally spaced on the same line as Boxes 1 and 2. This box sits apart from the other two, about 6 feet away. I sit about 8 feet in front of Boxes 1 and 2.

Georgie loves to hop inside any box he sees. I played for a few minutes of tossing toy mice into Boxes 1 and 2. After that I made it more difficult to jump into the correct box. I went full psych on him, and missed a box toss or two. Georgie goes on full alert. He looks inside Boxes 1 and 2, and then walks over to Box 3 and peers inside. This is such a brilliant thing for him to do. Even though I haven't tossed anything in it, he recognized that all three boxes are related, including the smaller one 6 feet away.

We’ve had as many as four cats at once. I’ve seen what those claws can da,that’s why my amp is behind a wooden door when I’m not using it.