What's on your workbench today?

Latest 50cc scooter project taking up every corner of the workshop. Yea...and that was the initial challenge. H grew up in Germany. In hindsight, I should have brought my metric tapes out as I work in metric in the shop and for locating boxes horizontally and vertically on sheets, it would have been just fine. My bad...

Finally got time this evening to work on a guitar!

Picked up a used Bigsby B50 to change out on my Oldest Son’s Jelly! Jazz/Tele

Before, was a cheap fake. Much smoother & stays in tune. Whammy bar is almost parallel with the body, instead of 45deg up in the air.
A little adjust of the bridge, to bring the action lower, and now plays like a dream.

Got sick of twiddling my countersink with my fingers. Thought I'd make a handle. 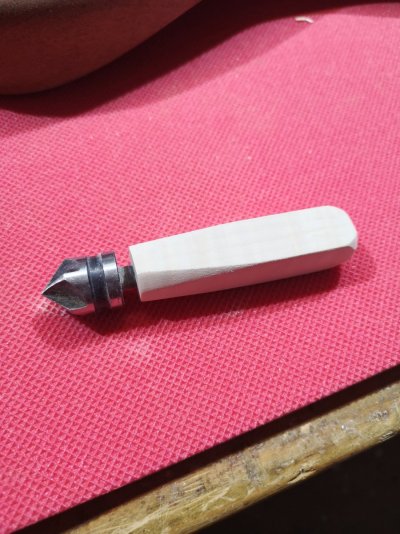 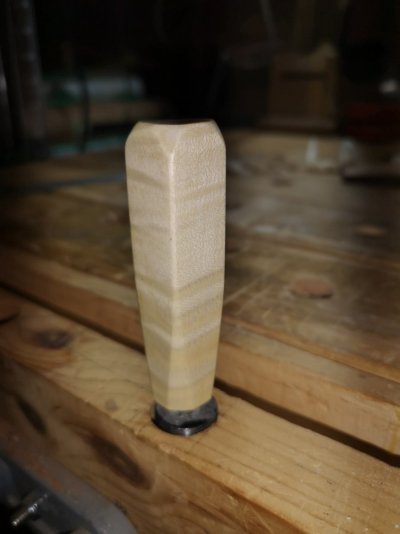 Same! Despite the fact, that it is horrible to bend, flamed ash is a secret weapon. Nice piece you got there!

tomasz said:
Same! Despite the fact, that it is horrible to bend, flamed ash is a secret weapon. Nice piece you got there!
Click to expand...

And in this case it is brutally heavy as well Well off my bench and out of the darkness of my basement workshop to some natural light. Going to get the contours carved on the black limba later on today and then get working on the 7 string humbucker template. Once I drill for the tuners I'll reshape the comically large headstocks. Then I may get to carving some necks. Me and my luthier buddy spent some time yesterday fretting the Padauk fingerboard of my Knooren Custom Strat. The tape is meant to sketch out where the studs for the wrap around tail is going to go. Today I lacquered the fingerboard to saturate the Padauk since it sucks up moisture like crazy. This is a level-PRS custom guitar, make no mistake, and I'm grateful I got it for free.
Click to expand...

i have seen some telecasters of the members of status quo that had those LP/SG bridges on there
did you set this neck with an angle ore do you route the body to lower that bridge?

hopdybob said:
i have seen some telecasters of the members of status quo that had those LP/SG bridges on there
did you set this neck with an angle or do you route the body to lower that bridge?
Click to expand...

Here's the guitar from the back. Now as you can see, it doesn't have a bolt on neck, the neck is set in and sculpted. I have done so many sculpting over the year working at that shop. The neck pockets were always routed under an angle. Yeah, this one was supposed to have a whammy bar, to be specific, THIS whammy bar. 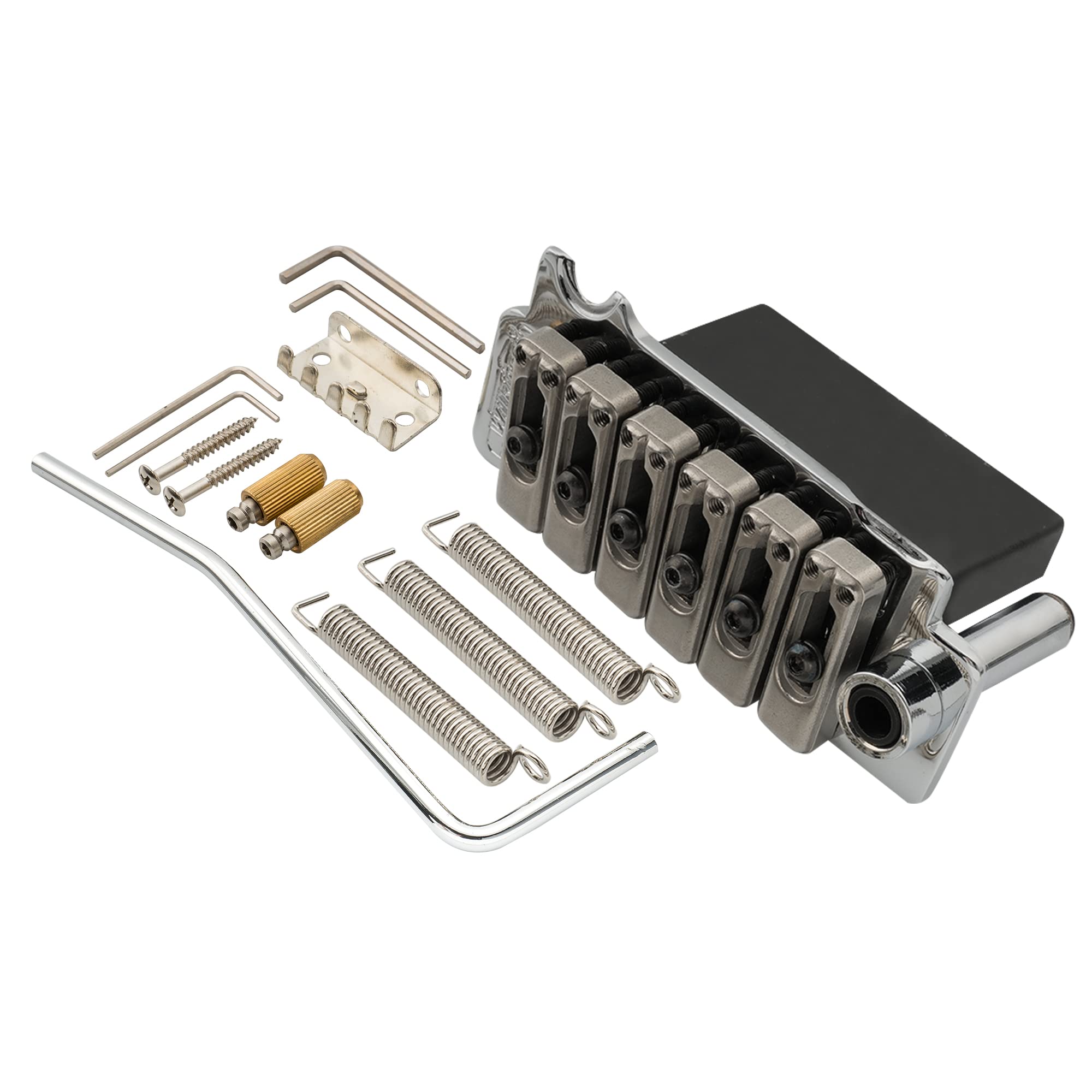 But every guitar in that shop was made by hand, and mistakes are going to be made. And this case, the route of the whammy bar was set too far back, it's supposed to have a Gibson scale with 24 frets but with the whammy bar routed this far back it would NEVER intonate correctly. In addition, the whammy bar would sit in too low on the body.

I was there when the other guys at the shop realized the mistake, this was NEVER going to be a playable guitar. So, they removed the original fingerboard, which ended up on another guitar, and tossed the casco aside, where it remained for over 20 years until my former boss handed it over to me. So ever since receiving it, I closed up the whammy bar route with a piece of wood from behind and a piece of very beautiful maple at the front. I suck at making photos with my phone, I know.

We measured out where the bridge was supposed to go and it's just before where the studs of the Wilkinson whammy were, confirming, once again, why a whammy bar would never have worked there. I'm going to be making a backplate, using that same flamed maple.

AND, I just started work on a tele using more hand-me-down wood, in this case Alder. I just had to get it in somewhere ... 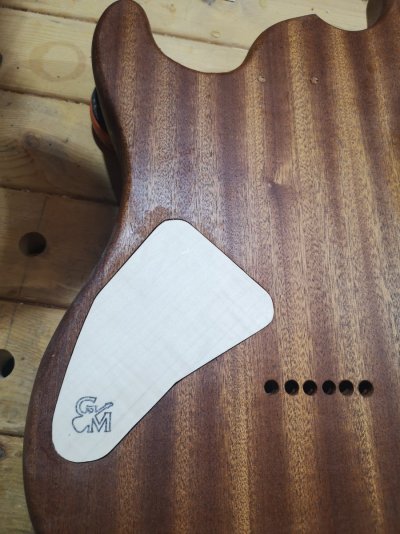 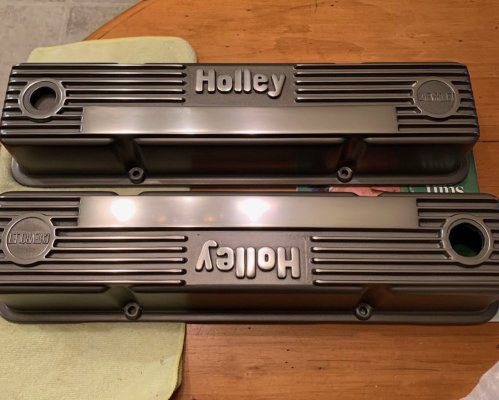 Jim_in_PA said:
Made good progress on the sheetrock today...while thoroughly enjoying tunes all day from WXPN.org (which I support) via an Echo Dot. That little thing sounded pretty darn amazing in the big space so I'm anticipating the big system is going to sound grand. TDPRI Forum member I_make_my_own is coming over tomorrow to help with the rest of the sheet rock work, so I expect that by the end of the day, it will be pretty near to be done.

Jim, you are making great progress on your shop. Congratulations! You'll be up and running soon.

My shop progress has slowed, my site foreman quit the builder, then his replacement quit, then the builder declared bankruptcy and disappeared, leaving my shop and several home owners out in the cold and multiple subcontractors unpaid. Since then I am slowly getting the last details finished up. Today the assembly room got vinyl flooring thanks to a little help from my brother, the tool room is next. I'm hoping to be ready to move in my tools by years end. Thing definitely move at their own pace in Tennessee. 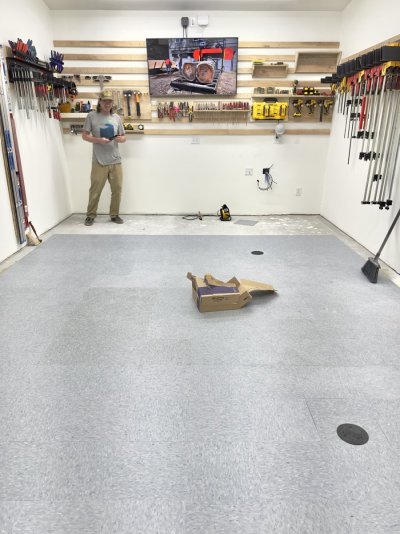 TN Tele said:
Jim, you are making great progress on your shop. Congratulations! You'll be up and running soon.

My shop progress has slowed, my site foreman quit the builder, then his replacement quit, then the builder declared bankruptcy and disappeared, leaving my shop and several home owners out in the cold and multiple subcontractors unpaid. Since then I am slowly getting the last details finished up. Today the assembly room got vinyl flooring thanks to a little help from my brother, the tool room is next. I'm hoping to be ready to move in my tools by years end. Thing definitely move at their own pace in Tennessee.
Click to expand...

Wow...that really bites relative to the builder going "milk glands up". I sure hope you didn't have too much money on the table at this point. That flooring looks great! Nice choice for sure. Same for the French Cleat system.

Unfortunately, my remaining budget isn't going to allow for any flooring embellishments at this point...as much as I'd love to coat it, it's just not going to happen. I definitely see light at the end of the tunnel now since I started the mud work today, but I don't think I'll match you getting things moved in before the end of the year, even though I'm going to try. I want to have everything "just so" before I make that step and even then, a lot of the first projects will be fitting out areas of the shop functionally, such as the cleats and getting the vertical material storage system setup.

PRS 7 string SE.
Gets a Duncan 59 at the bridge.
Fiddly wiring on the push-pull pots.
One wire was disconnected and I had a hard time figuring out where it was supposed to go.
Guy wants to tune the low string to A, and it's floppy, so I raised the nut slot just a tad with some CY and baking soda.
Just a tiny bit kept it from rattling.
I've decided I do not need a 7 string guitar. Test fit of the neck and trying homemade wipe on poly, Rustin's Poly gloss varnish mixed 50/50 with white spirit, on the control cover before I use it on the body. 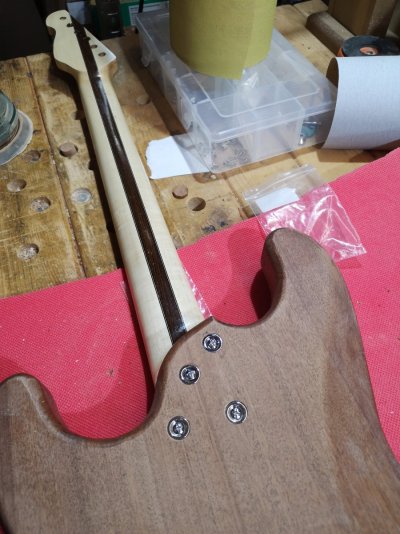 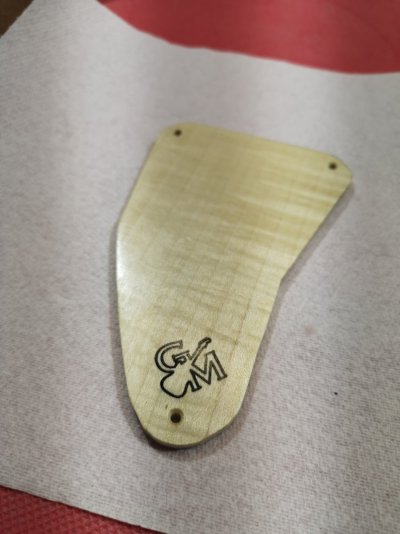 This guitar is the second I ever built on my own, 6 years ago. I set the neck in in a wrong angle and was so furious, that I smashed the guitar in the floor until the neck broke off. I was upset².
The broken of fretboard parts I still use today to determine my neck angles, so,something positive came out of it.

I then thought, well, why not use up the body? So I sanded off the entire carved maple top and put on a pear top.
Then I thought, why not make a Les Paul Custom style thing out of it with P90s?
So I did the binding. And it was a mess. The router bearing flew of, I had to patch the top, the binding job was just a pita. And so I left the body and neck (24" scale, just because) and left it in the rack for 6 years.

Last week I cleaned up my workshop a little and gained some space. And I found the bod and rough neck. So I thought, I will just finish this thing, no matter what will go bad.
And of course, this thing is cursed...I routed the neck to its roughly thickness and for some reason the router caught it for a second and left a ding about 4mm deep. So, I wanted to start from 25mm depth, and now I was at 20mm at the first fret, after clean up.
Oh my....

Then I fixed the binding as good, as possible with CA and Epoxy. What a mess....

Then I carved the neck shape and hel.and volute, thinned the headstock to final thickness and thought, why not rout the neck pocket?

I spare you the details but it took me a full 2 hours to make it work. It was such a nightmare, but now, the neck pocket is finished, the neck fits, I will need to clean up a lot at the edges and patch the binding in one place.

I think, I will put milkpaint in the guitar, body and neck and top, as I don't see myself cleaning all up to perfection, now that this thing really got on my nerves so many times...

But here it is, in all it's shabby glory. On the bench.. actually it just got off the bench… an Epiphone stereo chorus amp from back in the days. Quite a few dead transistors including the power transistors - some were zombies - they still worked but you could see they got too hot in the past. They all got replaced and since the box was open also replaced all electrolytic caps from the 90s in favor of new Panasonics and Nichicons. Amazing surprises while going through it: on one capacitor the polarity was wrongly printed on the PCB screen print - first thought the cap was in the wrong way but a closer look at the schematic revealed it was in the right way and the + sign was wrongly printed on the PCB. The head set out put had one resistor from factory wrongly installed. Schematic was asking for two 220 ohm resistors but only one was 220 while the other was 820 ohm -ooops. After replacing the 820 with a 220 the volume on both sides is equal as it should.

Should I cover my workbench with carpet?
2 3

What should I do with this? Input welcome!
2