What's on your workbench today?

Uhhh...That's a very beautiful and quite clever design. A great hybrid between violin construction and look, with a gracefully incorporated cutaway. Very daring, but nicely conceived and executed. Hope it sounds as good as it looks. What pickups do you plan to install? What are you intending it to sound like? And, last question: Is the top free to vibrate or is ther ea block under the bridge?

It isn't perfect, but this will definitely work. For my Spanish steel string

Jim_in_PA said:
I don't think there are enough switches and knobs on that one...you should add a few more. Seriously, that's gonna be beautiful!
Click to expand...

I am open for suggestions regarding moar switches

Decided to make a fret press using my drill press, but not as one usually would do it - I don't want to damage the drill's mechanism.
So the drill press just gives me a strong frame to press against, I could have used any rigid frame to press against. The press is a normal 13T car bottle jack. I made a caul holder to fit the jack's round press plate, and obviously I'm pressing upside down, but I don't find that an issue, hammer the fret ends in and give it a few light blows to seat the fret as normal, then into the press. Works well

The clamp is just to hold the jack steady in place

Before I used to press the frets in with the caul using a bench vice. 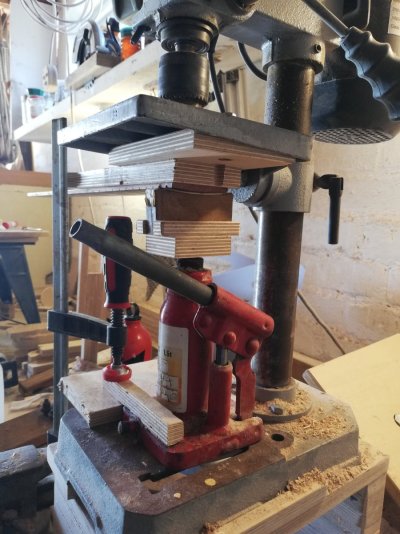 guitarbuilder said:
I just got finished gluing up a basswood body blank for a pre- prototype body that a fellow designed and wanted made. I want to see how it all works before I buzz out the final product out of maple which will be a little harder to work with and harder on my tools.
Click to expand...

Yesterday and today I was actually working on something in the temporary gara-shop...finishing up the other three speaker "enclosures" that will enable me to use four flat panel speakers I acquired in the mid-1990s from a former employer in my new shop building. I made the first one a couple months ago, but being in a small lull while waiting for a part to arrive for my mini split install, it was time to finish up this speaker nonsense so I can get them hung and crossed off my list. They will be powered by the AV receiver we had in the media room at our old property and be accompanied by the big sub that was also in that space. I'm honestly going to run the system in mono since there's little benefit in a stereo field or 7.1 in my workshop space with machines running, etc. At any rate...these are ready to hang after I get quick connect lugs crimped on to allow for easy install and easy repair if necessary in the future. Picked up a used set of tracks for my quad. Got them mounted today. A few minor modifications yet. Raises the bike up a bit. Slower, & rides a bit rougher, but should get me to the fishing hole.

Scott, that thing looks like it came out of a superhero movie! LOL

Got the speakers hung in the new shop building today...another thing crossed off my list. Thank ya sir!
Really digging the flamed ash....has it on the back too, with alder in the middle.

Are you going to leave the overhang on the top and back? Just wondering, I think it looks really good!

bullfrogblues said:
Are you going to leave the overhang on the top and back? Just wondering, I think it looks really good!
Click to expand...

My guess would be he is going to fill it with that strip of leather. still a few to finish and a few to touch up

bullfrogblues said:
Are you going to leave the overhang on the top and back? Just wondering, I think it looks really good!
Click to expand...

'Guns' is correct, tooled leather strip around the perimeter. Always loved those old Gretches where they did that.
You must log in or register to reply here.

Should I cover my workbench with carpet?
2 3

What should I do with this? Input welcome!
2