What was your first guitars?

What was your very first electric and acoustic? I'll start with my first guitar being a rouge dreadnought which I still have and is undergoing a refinish. My first electric was a series 10 danelectro copy. Post pics if you can, I'll have to find mine. Let's see some guitars!

First electric was a Teisco Del Rey much like this one, and a Silvertone 1482 amplifier. First acoustic was a Silvertone that after about a year, had action at the 12th fret of about 1/4". Been too long for pictures. My first acoustic was a Yamaha, similar to @Freeman Keller .

My first electric was a 1982(?) Peavey T-60 Sunburst. It was heavy but I loved it. Sold it when I got married and joined the Navy. My first acoustic, fresh from the 1970 Sears catalog. Virtually unplayable above the third fret. I sold it in 1992. My first electric, a used 1963 Strat that was heavily modified by the previous owner that I was able to buy at a very good price. It explains why massive mods to an already great guitar is a terrible idea.

First electric is a Synsonics, sold by Mattel, rumored to have been manufactured by Gretsch. A friend was moving west and needed to get rid of stuff. I paid him $30.
First acoustic was an MF stupid deal. A Yamaha F335. $79 or something like that.

I still have both.

My first acoustic was a 1970's Alvarez.
My first electric was a 1973 Fender Telecaster deluxe, which I sold and still regret to this day.

My first acoustic, the guitar I learned on, was a department store Harmony “f” hole with painted on binding. I put a DeArmond pickup on it, mounted on a block to place it closer to the bridge. My first amp was a Wollensack reel to reel tape recorder with a 12” salvaged hifi speaker in a pine box. The grille cloth was a burlap coffee bag from A&P. My first electric guitar was a cherry red Gibson Melody Maker. I couldn’t afford the SG, then Les Paul, I really wanted. My first real amp was a Reverberocket.
Last edited: Mar 31, 2022

Brand spanking new, made in the USA Fender Stratocaster. It was a Valentine's Day gift! Didn't know how to play it, but I sure learned. I wasn't going to let this guitar waste away in a case under the bed. A month later I wanted to compliment that electric with an acoustic. MTV's "Unplugged" was a huge show at the time. So I went to Sam Ash and bought myself a fancy Ovation Elite. Love this guitar. Telecaster582 said:
What was your very first electric and acoustic? I'll start with my first guitar being a rouge dreadnought which I still have and is undergoing a refinish. My first electric was a series 10 danelectro copy. Post pics if you can, I'll have to find mine. Let's see some guitars!
Click to expand... Woah, some of you guys have started off with actual Fenders, that would definitely be something I could only dream of. Anytime I get somewhat close to buying one something else pops up and then I have to buy that instead. First acoustic was a Stella that my mom got with S & H green stamps. First electric was an Aria 335 type guitar. First really good instrument was a ‘66 Guild Starfire III. First decent amp was a Teisco Checkmate piggy back. 50 watts, reverb and tremolo, 2 15” Pioneer branded speakers. Would give a Bandmaster a run for the money.

Bob M said:
First acoustic was a Stella that my mom got with S & H green stamps. First electric was an Aria 335 type guitar. First really good instrument was a ‘66 Guild Starfire III. First decent amp was a Teisco Checkmate piggy back. 50 watts, reverb and tremolo, 2 15” Pioneer branded speakers. Would give a Bandmaster a run for the money.
Click to expand...

1st electric was a 63 sunburst Fender Jaguar.... although I learned on my brother's Harmony bobcat....
1st acoustic was a Aria dreadnought that my daughter is learning to play on....
63 is long gone and I don't have any pics of the Aria

First ever guitar was a nylon string acoustic. I was 16, and worked in an auction room. This came up at auction, from a house clearance, and I bought it. Cost me two weeks wages. I gave it to a girlfriend's daughter when she wanted to learn to play, probably around 1990.

I played that till I was 21. Didn't really have any money for anything better. I wanted to be a blues player. I used to bend notes as best I could, but it never sounded very good. I didn't realise that a steel string is fairly fundamental if that's the sound you're chasing.

When I was 21 I saw an advert in the local paper for a Hofner Senator. She's the beauty on the right, below. Again, funnily enough, two weeks wages. I didn't have it, but my girlfriend had been saving up for a washing machine., and she said she would lend me that and maybe my boss would give me an advance on next week, which he did. I played it, and the blues licks I'd been trying to master suddenly just came tumbling off the fretboard like magic. I couldn't put it down. She was made in Germany the same year I was born. We've been together ever since. That's the longest continuous relationship of my life.

However, played loud through an amp she will always feedback uncontrollably, so I needed a solid body. Again, could never really afford one, but I had a motorcycle accident in 1987 - I was working as a bike courier in London; stupid way to try and make a living! - and I got an insurance payout. I had decided a Telecaster was what I needed - a straightforward, honest, working man's guitar. However, I was seduced by the beauty of the limited edition all-rosewood version that had just been released - a reissue of the George Harrison guitar. I got the one in the picture - Marlene, she's called. Once again, I wouldn't have been able to afford her - even with the payout - but she had some minor damage to the headstock so she was reduced. To be honest, I never even noticed - they had to point it out to me. She's been my number one stage guitar ever since. The pickups always seemed a little disappointing. I put a battery-powered preamp in for a few years, but you never quite knew when it was going to die on you. Around 2007 I had a pair of Joe Bardens fitted, and never looked back.

The rest of the "family" in the photo. Top right, the first amp I bought - an early 60s Selmer Treble n Bass. Beautiful tone. I watched a YouTube video about them just the other day and the guy described it as very like a Dumble, so there you go! It hisses a bit these days, so I'll get that sorted out at some point. Too loud for home use, though, and I'm not gigging at the moment.

I liked that Selmer head so much I bought a Selmer combo - a quite rare crocodile skin thing. I never quite got on with that, so I put it up for sale. Someone got in touch and said he collected amps and didn't have one of those, but he had three Vox Ac30s - would I take one in exchange. So that's how I got the Vox bottom left. Sounds divine, but you need to stand fifty yards away when you crank it up!!

And the resonator was hand-built by my ex-wife. When we split up I tried to give it back to her but she insisted she'd made it for me and I should keep it, which I thought was very gracious of her. Three years later I told her I was moving in with someone I'd met - now my second and final wife! - and my ex suggested this was an appropriate moment for me to return "her" resonator. So off it went. Sidenote - my ex-wife doesn't play guitar.

So that's the only one of the family no longer here. This photo was taken around 2006. I'd need a bigger camera these days!

As best I can remember my first guitar was something like this. The intonation was bad and it was not adjustable.
But it had a whammy bar 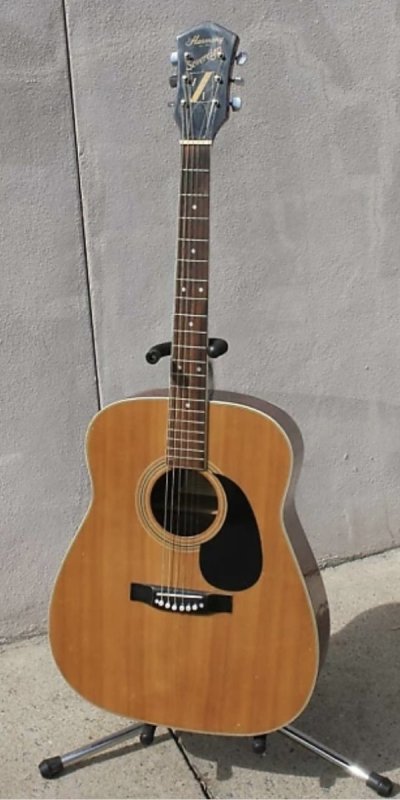 My first ever guitar was an old nylon strung guitar found at the back of dad's closet, and kind of ok to learn a few chords on. After that I had a Korean Rickenbacker 330 clone that I stuck a Bigsby on, and an Epiphone J200 for my first string string.

I don't remember particularly bonding with either and quickly started putting money aside for something better, and a couple of years later bought a Gibson - a brown 70s Gibson, admittedly, but still a Gibson - ES355 that I still consider my favourite guitar 25 years later. The J200 was quickly replaced by a Martin 000 when I was at university, which in turn was replaced by my 1920s Gibson L-1 which I still have and adore.

So I took a couple of attempts to find my forever guitars but I got there relatively early on. Didn't stop me buying tons more since but hey...
You must log in or register to reply here.

A
Telecaster for metal
2

Would a Historic Gibson make you sell your standard?
2