What strings do you use/why?

Sorry if this discussion is in the wrong place. I couldn't find a category I thought this really fit.

Lately I've been having a few discussions with fellow players about strings. I've spent years chasing tones through guitars, amps, and pedals, but I've never gone on a real tone quest with strings. An ad just popped up on Facebook for me for Curt Mangan. Apparently he makes boutique strings at a bit of an upsell.

At this point, buying some strings from smaller companies like Mangan seems like an experiment worth trying. A couple of extra bucks, and I might happen upon something that really makes my guitar come alive in a new way.

But in the meantime, what guitar strings do you use? Is there a brand you swear by? Currently all my guitars are string with Gibson Vintage Reissues. I really like them as opposed to say Ernie Ball sets I've played. Is there another brand I should try?

010-038 was the set almost everyone used during the late 60s and 70s (Hendrix, Clapton, Gallagher,Page to name a few) and there's a reason why: it is the most balanced sounding of them all (as an extra benefit for us Tele guys the light wound strings have killer TWANG).

Few brands carry this set and I use GHS because they are relatively available in the EU but they are also the best in my opinion because they are round core (killer feel and ease of playing) but also nickel plated steel (more twang than pure nickel).

I change strings after 10-12 hours of actual playing (all wound strings loose their twang after that timeframe) so super expensive strings aren't really my thing.
S

They feel bouncy under my fingers and I like that. 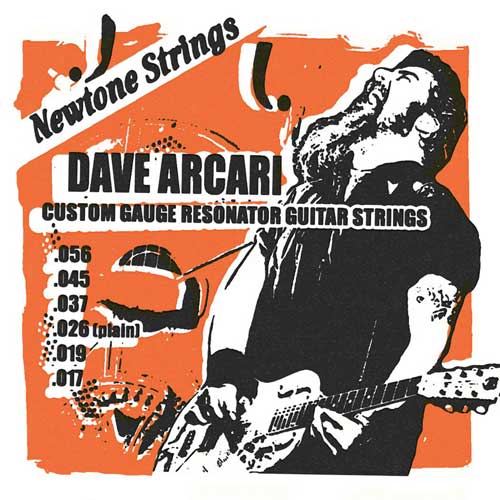 Newtone are a small manufacturer and Dave is a local musician, who's been struggling to find work, recently. I want to experiment, with lower tunings on my National, so I consider it a win/win/win....

I tend to make strings go dull and cruddy fairly quickly. I'm diabetic, and we have a reputation for doing something similar to jewelry, so I guess that may be why.

I used Elixirs for a while, and that helped, but they tended to sound relatively dull from the get-go, and as they aged the coating tended to flake off like sunburned skin, which wasn't a problem practically speaking, but it was annoying.

I then discovered Cleartone strings. They last long for me like the Elixirs did, but with a bright sound that doesn't change over time (at least not any differently than with "regular" strings), and without the flaky coating. I now use them for my electrics and 6- and 12-string acoustics.

They are definitely more expensive than other strings, costing maybe 3 times as much. But they last me 4-5 times as long, so the math works out.

I use plain old 10-46 sets on my electrics. That gives me the middle ground between sturdiness under the pick and bendability under the fret hand that I like.

I’ve always use GHS. Whenever I try other brands they don’t feel right under my fingers. Plus I’m originally from Michigan so I think they were fresher back in the day.

I’ve used a variety of sizes. Started with boomers in the late 80s and progressed my way to flats.
R

I use a different set of strings for practically every guitar. My string stash looks like a mom-and-pop. I have no idea why.

I use D'Addario electric, acoustic and nylon guitar strings. I have never had one break. They are high quality, sound good, and are a good bargain. I have no desire to go down a guitar string hunting rabbit hole. I think they sound good for surf. I play a vintage style Jazzmaster and Leo intended for them to be played with heavy gauge strings.

Ball Super Slinky’s 9-42 on my Teles and Strat. They sound the best to me. Tried many others but always go back to Super Slinky’s

Gibson 10-46 on my Casino. What Epiphone recommends. They sound good and last.

Assortment of D’Addario 12-53 on my Hummingbird. I have 3 or 4 sets of different types.

Got a dozen cheap sets of Rotosounds though recently. Can’t tell any difference really.

Not got on with any D’Addario sets for some reason.. fatigue my fingertips.

For my electric's, D'Addario EXL110, 10.13.17.26.36.46. For my acoustics I use their EJ11'S. They used to give me a couple of boxes at a time when I was working. And they very nicely continue to send me a box each time I order. I've tried to pay for them but they continue to comp me even though they know I'm retired and no longer touring. They're a real class act.

I started using Curt Mangan strings about a year ago and I love them. I use 9.5-.46 on my strats & teles, and .10-.46 on my Les Paul Traditional & PRS McCarty 594. They have a quick break in and last longer than other strings I’ve used in the past.

Local company, very good to their workers and community. Worth every dime I give them.

On electric guitars I used 10-46 Boomers for years. Then I started running D’Addario XL 11-49s On my Bigsby equipped Gretsch because that’s what came on it and they worked. So I tried the XLs in 10s for my Tele and other guitars and found them to be fine, so I just stick with that brand and go for the multiple set deals on online when I order and just mix and match the 10-46s and 11-49s.

I have a set of Tomastick Infield Jazz Swing flats on my jazz box.

I use Elixer Nanos on my acoustics for the life the have, even tho they aren’t the absolute best sounding when new. But I like the feel and tone of them better than the coated DAddario EXPs.

My basses get Labella Deep Talkin Flats and I love em. They never wear out so I may never get to try those expensive Tomasticks or Pyramids, lol.

I've been using Pyramid Nickel Classics (10-46) for a couple years now. They sound good, and seem to last a bit longer than most others. Honestly, I'm not as particular or "picky" about strings as many.....not that I'm criticizing, though.
I currently have a set of Pyramid Gold, Chrome Nickel Flats (10-465) that I'm going to use at my next string change. I haven't used any flats on a guitar in decades......it might be interesting, or it might be a bust.

I used to use the regular D'Addario's EXL110s on everything, but lately I've moved to the D'Addario NYXL -- they cost more but seem to last longer, and stay consistent in tone from new. I've moved to 11-48 on my Gibsons and one Tele, and 10-46 on my other Fenders. I like 'em fine.

Richie Cunningham said:
I use a different set of strings for practically every guitar.
Click to expand... D'Addario XL110 10-46.
I just like 'em. Anything lighter feels like noodles. Seem to last a fair while too. And I like the pretty colours -hehe-
You must log in or register to reply here.

Open E players, what string gauges do you use?
2

Saturday at 3:58 AM
mike stanger