What changes would you make if you were the Sports Czar for a day?

The "house-sized" soccer goal is well-defended! Happy Thanksgiving, everybody Have each schools' band play, live, the Fox, NBC, ABC, CBS sports (whatever network's) thrilling intro, bumper theme. Instead of the recorded version.

Local color. Human, on-site, game day, the old college try, input. Have viewers vote at the end of the season for the best rendition of, for instance, Fox's dah du dahdahdah DAAA! Piccolo players would get to bask in some of that red white and blue Saturday glory

Yes, the whole band (or a smaller pep band) would have to be ready to play it on the signal from the broadcast director when e.g., they break to commercial.

University music directors would love the challenge.
Last edited: Thursday at 9:56 AM

Formula 1 :- Add a loop-the-loop
Golf :- All golf courses to be turned over for agriculture, all future tournaments to be played on crazy golf courses
Snooker :- One frame in ten, one of the reds is made from nitrocellulose. Boom!
Darts :- Blindfolded, player spun until dizzy
Horse Racing :- The horse has the whip

FIFA:
1) Either shrink the field size by 50% or remove the goalkeepers. Or... use the volleyball rule that the ball
needs to go over to the enemy side on the 3rd touch at the latest or the enemy will score a point.
The game will be much more interesting then.

2) Sometimes you need to be able to eliminate one of the teams if neither agrees to lay down and lose.
First there's time extensions. Fine. Then there's sudden death overtime. Ok. But then... penalty kicks!
Even though some(as in extremely few) goalies are somewhat adept at catching penalty kicks it's
still a game of chance, not skill! What's worse; it's a contrived situation that does not reflect the merits of
either team during the match. I'll still allow the penalty kick-off though, but only after this step:
The statistic "shots on target" decides! That is, the amount of times a goal would have been scored
if the goalkeeper hadn't successfully blocked it. It took actual skill in the actual game to make those
shots happen. The team who made more of those would arguably be more worthy. Also, if this rule is
in place teams know that it's a possibility they will win by this stat. This will encourage gameplay that
racks up that stat. And... if we have a drastic increase in shots on target, then we will have a much more
interesting game and maybe even a winner by the end of standard time.

F1:
1) Can we please have some 30cm high concrete blocks lining the track around the S-curves?
I'm fed up with cars taking shortcuts.

2) No pit stops! Drive smart and you'll make it all the way.

Colo Springs E said:
You have unlimited powers, no one can check you. Here are a few for me:

1, (NFL) Eliminate or greatly reduce Thursday night games. I think it's dangerous for players, the quality of play suffers and as much as I love football, I don't need it all the time. Leave me wanting more, not getting tired of too much. Keep Thanksgiving obviously, and maybe one or two more. Make it to where the teams who are playing in the Thursday game, had a bye the week before to ensure rest and recovery.
2, (NFL) Change pass interference to where it's not so punitive to defense. Max of 15 or 20 yards, not unlimited yardage like it is today. Along those lines, allow for some touching and back-n-forth that doesn't significantly interfere with the receiver's ability to catch the ball. And throw the flag on the offense just as you would on the defense.
3, (NFL and College) Ease up on taunting penalties. If a guy REALLY gets in someone's face, carries it way over the line, etc, okay, hit them with a flag and/or toss them depending on the severity. A little bit of smack talk? C'mon, the game is supposed to be fun, let them have fun.
4, (NBA) Make home court advantage more of an advantage. Seven game series, the higher seed gets FIVE home games to the lower seed's two. If home court is a significant advantage, maybe teams will try harder for it in regular season by not sitting guys so much, "load management" etc.
5, (NFL) Don't reward terrible teams with number one pick. Use a lottery or something like the NBA does, but do something to discourage teams from tanking. How about among all non-playoff teams, the first pick goes to the team among them with the BEST record, not the worst?

I've got others too!

Simply standardize the word"football" worldwide... Then stock up on popcorn.

Change the shape of the ball.

Texicaster said:
Baseball would be played with a basketball.

Football would be played with a baseball

Basketball would be played with a football.

Hockey would be ....oh who cares about hockey!
Click to expand...

BryMelvin said:
Simply standardize the word"football" worldwide... Then stock up on popcorn.
Click to expand... 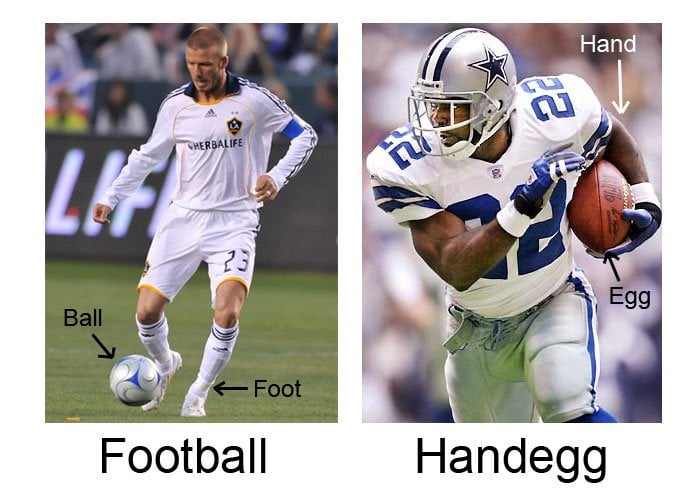 Take an American football field and add another one going crossways across the main field! So it's shaped like a plus sign! +