What’s in a name?

Bruxist said:
My wife's new doctor is named Skyler. We thought that was funny, but I mentioned in 50 years, Skyler may be a grandmother's name.

And a bunch of decades ago, Agatha was a young girl's name.
Click to expand...

My late mother’s name was Agatha.
She was born in 1925, close to a century ago.
Passport pic, me in natty sweater, Mom with baby barf on shirt, my baby sis. I go by my middle name, the apparently dreaded Geoffrey although I go by Geoff. My first name is also my father’s. It is not particularly common these days, probably considered old fashioned now.

My kid was named after his grandfather, who was no longer with us. His middle name was one of my dad’s two middle names. It is also the name of a famed hockey broadcaster. His last name is hyphenated which I suppose was fortuitous given the divorce.

Toto'sDad said:
JD, I know you may feel put upon by your name, but what if it was:

Poor soul is gone now, but I'm just gonna go out on a limb here and guess first time introductions took a while.
Click to expand...

Those who know, know.

When we moved back to Ohio in 1975, there was a gravestone in the barn. The woman's name was Emiline Hurlbutt. We think someone stole the stone because the name was funny. it took a while to find where that headstone belonged so we could return it.

It just occurred to me that Tele players, musicians in general actually, have the weirdest and BEST discussions. It’s been fun guys - trust me, I needed this especially today. Thanks!

What with the excitement and all, I plumb forgot about that little boy named Ridgid. One morning back when I was a young man working on the farm, my boss's son, and I were working together. He said to me, I know a woman who just had a baby just over the way, let go over and look at it. When we got there, her husband was gone to work, but she was out in the front yard with a bunch of their other kids, and had the newborn out with them. We asked about the baby she said it's a boy, and I named him Ridgid. Jack and I looked at each other, and she said I always admired those Ridgid pipe wrenches, and I just went and named him Ridgid.

I just wonder how old Jake Dog would have felt about having to explain that every time he coughed up that name had his momma named him Ridgid? I reckon little Ridgid would be about fifty four years old by now, I have often wondered how he turned out. I doubt there's anyone out around Pond California that would remember any of that by now.

Those who know, know.

My name is Luxury Yacht, but it's pronounced Throatwarblermangrove

I've never really liked my first name.
Most of my friends are known by nicknames, their surnames or an abbreviation of their surname.
However, my Grandfathers were Reuben & Claude and my Dad, rest his soul, was Cyril.
So I think I got off lightly.

Even as a child, I hated it. It just never felt like me. I never identified with it. It’s not a bad name. It doesn’t carry any real negative connotations. It’s just not who I am. I knew from the time I was old enough to answer to it.

I started going professionally by my initials in 2005. GS Harper. Not a “real” name, but I didn’t have anything I liked better, and name changes legally are whole ball of cheese anyhow that I really don’t feel like pursuing. And I have no idea what I’d choose anyway. I just know I have always hated mine.

My biggest backlash has always come from my mother. It’s understandable. She named me. It meant a lot to her when she did it. But it’s… just not me. Never has been.

Huge bridge crossed tonight. She addressed me as GS in a public social media post. I about fell over.

Over the years, I’ve posted here several times about our very contentious relationship. I don’t get along with my mother. At all. I haven’t, well, ever. But this blew my mind. Totally.

I’ll be 49 on Sunday. She’ll be 71 in July. She’s finally making an effort to understand and accept me. At least it seems that way. Maybe I’m reading too much into it. But holy cow. For the first time in 49 years I feel seen by own mother.

I also talked to her on the phone earlier. Yay, Mother’s Day. And she didn’t ask me if I was ever going to get a job. She didn’t praise anything, but she didn’t try to shame me or make me feel bad for being a musician. That’s a first.

I don’t know where I’m going with this. I just gotta tell someone. So I know I didn’t imagine it. That’s all.
Click to expand...

I'm not trying to rub it in but I like my name. Many times people I meet mis-hear my name as it's not a common name but sounds extremely close to a very common name. I've gotten used to being called many names. Lol.

There happen to be two names I've never liked. Not long ago I learned that my parents had two other names chosen for my first and middle names, then changed their minds at the last minute. It happens to be those two names I don't like. I haven't lived your pain but I understand it.

I can also understand where your mom is coming from. My kids are caught up in the pronoun movement. Both daughters have come back to going with her & she but for a while I wondered where my daughter's went. Their mother and I didn't make any its. For anyone reading that last sentence, it is not an invitation for a debate.

It certainly is important to be able to feel like your best self and I hope she continues along with you.

I remember a movie about mountain men in the '80s, I don't know if it was "The Mountain Men" or another one more obscure (please let me know if you know). One of the characters was a younger guy all the other characters called "Greenhorn" because he was young and new to the mountain man lifestyle, and an older character of few words named "Kintuck" (for all you greenhorns, that's mountain-man-speak for "Kentucky"). As the group are bedding down for the night, someone in the group remarked about Kintuck being from Virginia.
Greenhorn: "You're from Virginny? Then how come you tell folks to call you Kintuck?"
Kintuck: "So they don't call me Virginny".

brookdalebill said:
My late mother’s name was Agatha.
She was born in 1925, close to a century ago.
Passport pic, me in natty sweater, Mom with baby barf on shirt, my baby sis. View attachment 981775
Click to expand...

What a cool thing to have. That is awesome.

black_doug said:
My son got named Luke. Nothing wrong with names from the Bible. Well, maybe not some.
Click to expand...

Tell that to my buddy Habakkuk.

black_doug said:
My son got named Luke. Nothing wrong with names from the Bible. Well, maybe not some.
Click to expand...

One of my ancestors, way back, was named "Absalom." My son and I were wondering why someone would name their baby "Absalom." Absalom was certainly not a role model.

brookdalebill said:
I named my daughter after two of my three sisters.
In hindsight, I should have included my other sister.
I suspect my other sister might feel slighted.
Too late to make amends.
Click to expand...

Jakedog said:
Well, we’re related. Not closely, obviously. But we are. Harpers only ever came from one place. So nice to meet you, cousin! No matter how removed you may be.
Click to expand...

Reminded me of this: 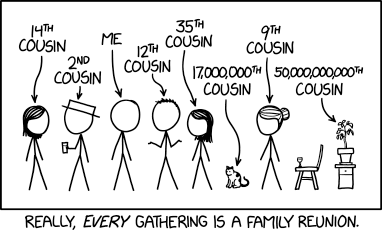 I have the same initials as my grandfather and father. D.L. Reed kind of became a family tradition but I never go by that moniker. We have different first and middle names with D and L initials. My grandfather always went by D.L. and his first name was Deforest which is pretty cool!

Chester P Squier said:
One of my ancestors, way back, was named "Absalom." My son and I were wondering why someone would name their baby "Absalom." Absalom was certainly not a role model.
Click to expand...

Maybe they are Faulkner fans.

I think of that with the name Delilah alot. But I am sure there is more to that name than one bible story.

Just like in Indiana Jones: "We named the dog Jake."
D

My sister-in-law had a female business partner named Positron. Her father was a physicist and named each of his kids after a particle.

I don't like my name, but mostly people to judge me by my actions rather than what I'm called, so it doesn't matter that much to me. Took us a very long time to come up with our kids' names though. My wife's method was to imagine the ways a name could be twisted into a schoolyard taunt, and reject anything that could be. Narrowed things down a lot.

drumtime said:
My sister-in-law had a female business partner named Positron. Her father was a physicist and named each of his kids after a particle.
Click to expand...

And my other kids: Lepton, Gluon, Muon, Charm and Strange.

A name bank for men should consist of. Bill, John, Jim, and Mike. Whoever heard a detective story start out: I'm a private eye, the case started when Zelda answered from across the room and said, it's for you Throckmorton!
You must log in or register to reply here.

How does one cure impulsiveness?
2 3 4