To me, you've started in the right place. Relic'd painted guitars just look old and beaten up to me. I'd try to age the exposed wood. It looks too new for relic to me. I don't know what's done to age it. Teak furniture gets gray from exposure to sunshine and the elements. I'd guess that a tanning lamp would age the wood and the plastic parts. Others probably know better. I just know what I like. FWIW, I have a CS '69 heavy relic Stratocaster. That's where my darkening the exposed wood comment comes from. PM if you'd like me to take pictures of the back and neck. I don't want to hijack your thread with pics of my gear. Play it a real lot

All the pics you want! I thought it looked to new for a relic too and i tried boiled linseed oil and it did a little but not much

Also... Why is the bridge pickup slanted the opposite way they normally slant it?

I also need help relicing hardware. If I can do it with stuff around the house that would be great too

Telecaster582 said:
I also need help relicing hardware. If I can do it with stuff around the house that would be great too
Click to expand...

For a lighter level of ageing on metalwork, you can put it in a zip lock bag with some white vinegar in a dish next to it. After a day or two the vinegar condensates and takes the shine off the metal.

Another trick; put the parts in a tin with some small pieces of gravel and give it a shake. Take it out every now and then to check progress. I also put masking tape over any area that wouldn't normally get worn (like the back of a jack socket, under the saddles on a bridge, etc). Then I did the vinegar treatment afterwards.

I only did it to take the edge off my metal work on a Strat I built last year and after the work I did spraying the body I hadn't the guts to start chipping the paint. Just as well because the body ended up too heavy so I swapped it for a lighter one and now I can sell a 'NOS' nitro finished body.

I did the vinegar trick on bits of my avatar Esquire/Tele too, so I'll put a few pictures below for you:

Less obvious from further away: 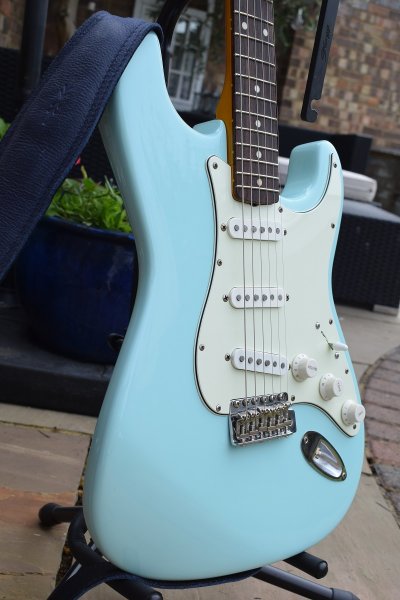 Closer up. I just wanted to take the shine off a bit rather than make them very rusty. I know they'll age soon enough when I'm playing hot and sweaty gigs: 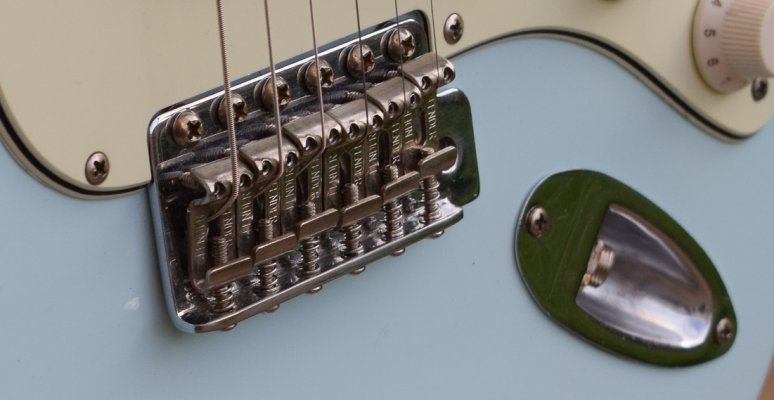 The Esquire/Tele; I bought the pre-finished/aged body, which wasn't my first choice really, but went with it. It's a bare Bakelite guard that has aged naturally through playing, the metalwork I did as described above: 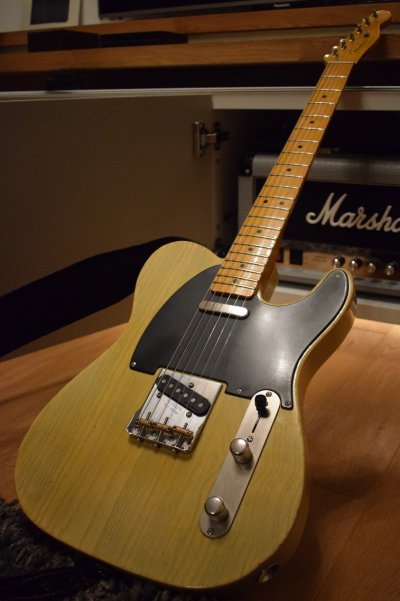 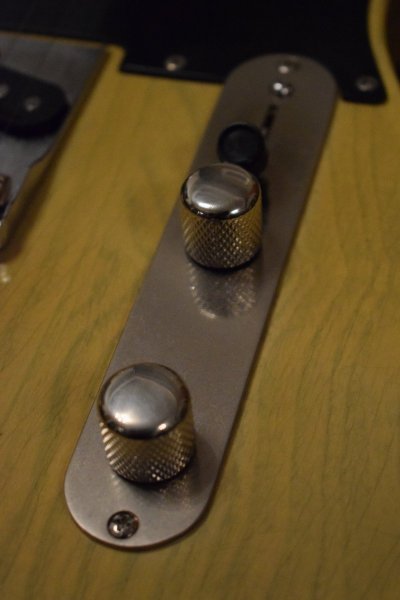 I left the brass saddles to age just by playing...it didn't take long and they have dulled further since this picture, so a bit of patience can help for a more natural look: 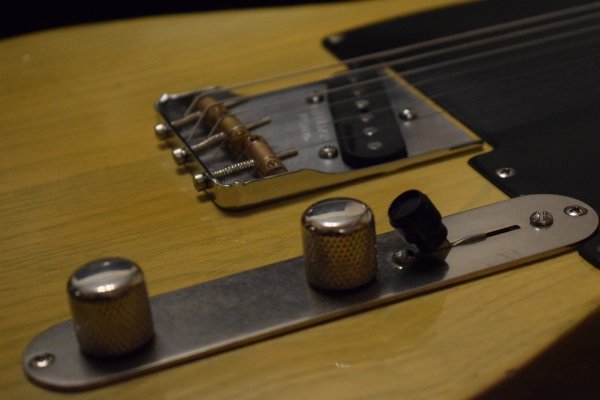 Telecaster582 said:
I also need help relicing hardware. If I can do it with stuff around the house that would be great too
Click to expand...

I've had great results knocking the shine off chrome bits with a moist scotch brite pad. Gives it almost a nickel look, and if its chromed brass, you can take it down to where the brass is just barely peeking out

Let me start by saying that I LOVE a good relic job, so I'm NOT anti-relic. I have a couple myself. Having said that, if you don't know what you're doing, they look awful and fake. There aren't a lot of people that can do a really good relic job; it's as much art as it is science. I'd skip the home-made job and find someone that knows what they are doing.

Not what you want to hear, but I'm really doing you a favor.

I'm not able to see the attachments in the OP, maybe it's just me?

Hardware is fairly easy to relic and there are some really good suggestions in this thread already. Bodies and necks on the other hand...

I'll start by saying there is a BIG difference between poly and nitro finished guitars. IMO, poly doesn't take well to relic'ing. Poly by nature is really hard, durable, and resistant to wear. They will naturally age (not as much or as quickly as nitro), but when folks try to speed up that process it tends to look really fake.

Nitro on the other hand can be relic'd. Relic'ing is an art IMO, and requires practice and a bit of trial and error. I wouldn't recommend relic'ing your #1 if you haven't done it before. Buy a nitro finished body and/or neck to practice on (then assemble a Partscaster when you're done). Sandpaper and/or acetone for wear spots (be very careful, a little goes a LONG way), compressed air / razor blades for checking. Grab a few different sized small rocks and super glue them to a dowel rods, then strike the guitar in random spots and angles for chips. Rub some brown shoe polish on exposed wood to darken it.

I'm a firm believer in natural wear vs. relic jobs, but I will say that I love the looks of a good relic job too. I read where people will put their bodies and necks in a freezer for X number of hours and then bring em into the house, whereby the finish with craze. I've never tried this myself, however, so don't know what the results are of that and if there would be any long term negative affects to the parts? Maybe others out here can chime in who've done this before.

Bought 4 guitars - had 2 of them relic'd .... Then sold the non relic ones, cos i prefered relic ones - then i sold the relic strat cos i preferred the tele - then i sold the relic tele cos i wanted a Thinline - bought a Thinline mk 2 and had it relic'd, wasn't happy with the relicing on the neck, so had the neck de-relic'd (but left the body relic'd, but had it sprayed with gloss polyurethane), plus had jackson pickups fitted....then bought a thinline mk 1 and decided to leave it un relic'd (changed pickups though) and both pro set up - My missus thinks i've lost the plot .....
. Telecaster582 said:
Also... Why is the bridge pickup slanted the opposite way they normally slant it?
Click to expand...

The guitar was used during the 2019 Fender Custom Shop Road Show. There are other oddities about it like a reverse sunburst headstock. Hendrix thing? IDK. But the wound strings have bite with the bridge pickup with no shrillness or ice pick. I was never a fan of relic but it’s grown on me and the low wind CS ‘69 pickups are amazing.

Telecaster582 said:
All the pics you want! I thought it looked to new for a relic too and i tried boiled linseed oil and it did a little but not much
Click to expand...

I’ll take pics of the back and neck later today and post them. Here’s one of the headstock I have on my phone. I don't have view permissions for your photos.

Use the least amount of nitro you can. I did a Strat in LPB and designed it to age fast. I didn't leave the wood completely smooth before applying the finish...it was smooth to the touch, but I didn't use any grain filler or primer. I only used about 2/3's of a nitro can to finish it. After about a year, the finish began to sink into the grain like an old guitar finish would. You can checker the finish later, I waited a couple of months. Heat it up a little with a hair dryer and hit it with a blast from a compressed air can...held upside down. Go slow. Works on headstock. The neck? Just a little tint, small amount of finish and don't wash your hands before you play it. It'll age quickly.
The main thing, IMO, when doing it yourself is to allow it to age. Sure, speed it up...but don't do it with the idea of having it looked aged immediately after you complete the job. Those never look real.
Knobs and switch tips, rough the surface up with steel wool and soak them in coffee or dirty water until they look like you want them to. Pickguards are more difficult. I like a dark cream color, like coffee with cream...I rough the surface up with steel wool and soak it in a mixture of coffee and brown fabric dye....for weeks. Pickguards don't tint easily. It's usually easier to buy one relic'd.

A couple relics of mine. The black one is a 2001 Custom Shop factory relic. The Sonic Blue is a partscaster I relic'd through various methods. Thanks everyone! I'll repost the pics and see if they work NGD (My Gas is Out of control)