Big deal, right? Well, for me and the missus, it was a big deal, a date that would come to be important to us. We just didn’t know it at the time.

The pups were what I’ve come to call Bocker Speagles. Their father was a beagle, their mother a Cocker Spaniel. The rest of the pics in posts below will be all about our pup Bella (more about her name in a moment), but I have to include pics of her parents, Kurt and Goldie. And while I’m at it, I do also have a picture of Bella’s Grandma when she was a pup… Oh, and I might as well throw in a pic of some of her younger siblings… So we have documentation of Bella’s ancestry and family, and know the date of her birth. Obviously, she is not a rescue dog. We have had pets (and still have one pet) that were rescues, but Bella isn’t one of them. As we were considering a new pup (we’d lost our previous dog, a hound dog named Ina Mae, to heartworms a few years before), we knew we wanted an indoor dog.

And a smaller dog. My wife wanted a lap dog. As girl she had a Dachshund named Sam, so she probably wouldn’t have argued a bit if I had agreed to a Dachshund. But I haven’t had good experiences with that breed, so I wasn’t inclined to go that way. In fact, I didn’t want any of the breeds that I typically associate in my mind with the designation “lap dog.” But a small dog was okay. I had two breeds in mind.

When I lived in Puerto Rico as a boy, we had a Cocker Spaniel. (She was all black, except for a smattering of white here and there, we named her Noche.) My wife’s aunt (from whom we bought the house we’ve been living in for 32 years now) at one time had a Cocker named Lady. So Cockers were high on our list. And I had always loved Beagles, so when we began our search six plus years ago, we were primarily looking for one of these two breeds.

Then someone who knew we were looking saw an ad for a litter of pups in the Rio Grande Valley, a little more than two hours south of us here in Corpus Christi, the aforementioned litter of Bocker Speagle pups. We got in touch, and they still had one pup from the litter, so we drove down.

And my wife fell in love, and we came back home with that little female pup. Before leaving, my wife asked when that litter of pups was born, because she wanted to know when to celebrate our little cutie’s birthday. October 6th.

As we were driving back home, we were discussing what to name her. My favorite cartoon strip of all time is Charles M. Schulz’ Peanuts, and I loved his depiction of Snoopy in that strip. At one point Schulz introduced a sister of Snoopy’s. As I was driving and my wife Beth was holding/bonding with the pup, I could only go from memory as to the name of Snoopy’s sister. I remembered it as “Bella.”

Of course, in both Spanish and Italian, that means “beautiful,” so Beth liked that idea. By the time we arrived home, it was settled; our pup’s name was Bella. Only then was I able to get on my computer and look up the name of Snoopy’s sister. Once I did, I discovered that my memory was wrong; Snoopy’s sister was “Belle,” not “Bella.” But by that time, my wife was already settled on the name Bella, so Bella it stayed. So she was named sorta accidentally, but it was a happy accident.

Even without the pics of Bella’s family, this is becoming a long post. So I’ll post just one more pic, one taken by the breeder, and subsequently post more pics—probably a lot more pics—of Bella. Happy birthday Bella!! And many more.....

My dogs are both rescues, so their birth dates are unknown. Doesn't keep us from celebrating!

What a good dog!

We had Doxy-Cocker-Corgi? pups 17 years ago unexpectedly. We kept 2 of the pups, would have kept them all if it made sense.
They are gone now but lived 15 years and of course we miss them terribly. Cockers are pretty dogs. Can be a little honery sometimes and have plenty of medical issues. But great companions. 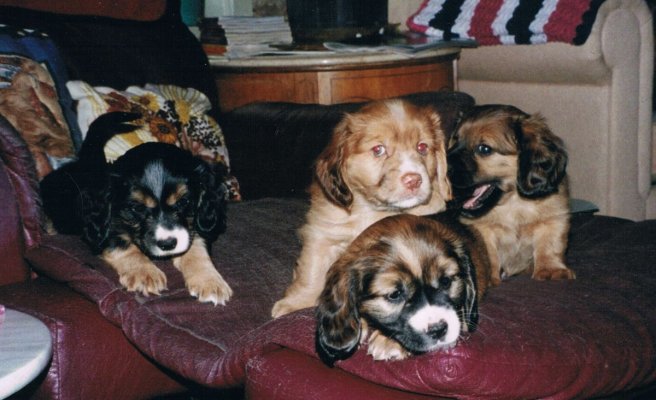 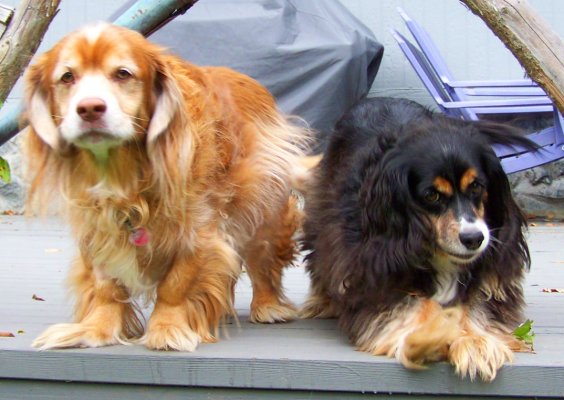 We have something in common. My bday today too

uriah1 said:
We have something in common. My bday today too
Click to expand...

Well happy Bella day to you, too!

Happy birthday, Bella. You are a beautiful lady

I intended to post more pics of Bella straightaway, but time got away from me. I had to rush out the door to go to my afternoon gig at the seniors community. (Some of y'all know that I've done this one venue, Garden Estates Retirement Community, every Thursday for years. Well, I was sick last month, so today was my first day back after a month of Thursdays. That's a thread story in and of itself.)

Another pic of Bella taken by the breeder, very shortly before we picked her up. As we were driving back from the RGV with Bella, who was “coming home to a place she’d never been before.” The morning after we brought Bella home, Beth took the pic below, of she and Bella out in our yard. I posted it here on on TDPRI. I don’t remember if it was in direct response to this pic, but fellow member @R. Stratenstein commented about Bella, “She’s beyond cute.” Love that line, and it occurs to me every time I see or even think about this pic … She still has that bear. It doesn’t have quite as much stuffing as it used to, but she’s still got it. I could absolutely inundate this thread with pics of Bella we’ve taken over the course of six years. Between my wife on social media and me on TDPRI, Bella has lived her life as something of an online celebrity. I will restrain myself from posting 72 months of pics of her development month by month.

Here she is as of today. Well, one is a montage of pics taken 4 months ago, the other was taken a week ago. This was Abbey. After I retire, we'll get another dog, I'm certain. Enjoy Bella!

Bellísima
You must log in or register to reply here.