A friend brought his P-bass to me for a little work. After restringing with some Ernie Ball flatwounds the guitar developed an open string buzz on the third string. Dampening the string behind the nut kills the buzz. The string wrapped pretty deeply on the tuner post and the previous strings, which had fatter winding did not buzz.

The guitar has fairly low nut action (0.020 on the third string) and the break angle is very shallow (5 degrees or less). It simply looks to me like we need a third tree, but I have not seen a single string tree for a bass like this. Any suggestions? A second round tree looks like it would fit between the E and the A tuning keys. Then of course you’d only use one side.

I think that whatever tree you use it still won’t look quite right. So duplicating the one you have may attract the least attention.

How about fashioning something like this if you don't want to drill: The Three String Tree by Music City Bridge is an elegant solution to the age-old problem of the buzzy G string on your 6-in-a-line headstock guitar.

What do you see that is wrong with the nut?

extended bar that holds down the three high strings

I doubt this particular one could work for a bass, but perhaps your could fashion something along similar lines?

Freeman Keller said:
Dampening the string behind the nut kills the buzz.
Click to expand...

What if you wrapped that string behind the nut with something like a pipe cleaner, or something?

The thing below is a real thing. Fender has made these for years because it’s been a problem on their basses since the 50s. It’s just the A string. I have one of these on 1 P bass. It sits on the post and you use the nut to hold it on. Problem is they make a bunch of different tuners and only one size of this thang.

Honestly what I always do and many bassists do is wrap the A at least 3 times around the post so the wraps hold the string to the bottom. So basically you make a higher break angle. Thanks for all the comments, folks. I've passed this thread on to the owner, he said he has ordered another of the standard bass trees.

Freeman Keller said:
It simply looks to me like we need a third tree, but I have not seen a single string tree for a bass like this. Any suggestions?
Click to expand... 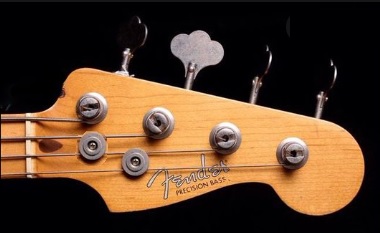 A more elegant solution is a string retainer bar, like this: The round tree is common. I gotta believe it's a matter of those type of strings not working well on the P Bass and worth noting. ? They are pretty small diameter up there at the tuners... Thicker string body around the tuner would help maybe. That winding is going to creep up higher too ...as the coils have not slipped up yet.

extended bar that holds down the three high strings

I doubt this particular one could work for a bass, but perhaps your could fashion something along similar lines?
Click to expand...

I like the look of the Reverend 3 stringer.
I would get 2 of them and use 2 brackets to support the bar whether between 2 of the 3 strings or outside of the 3 strings. Might need a longer bar