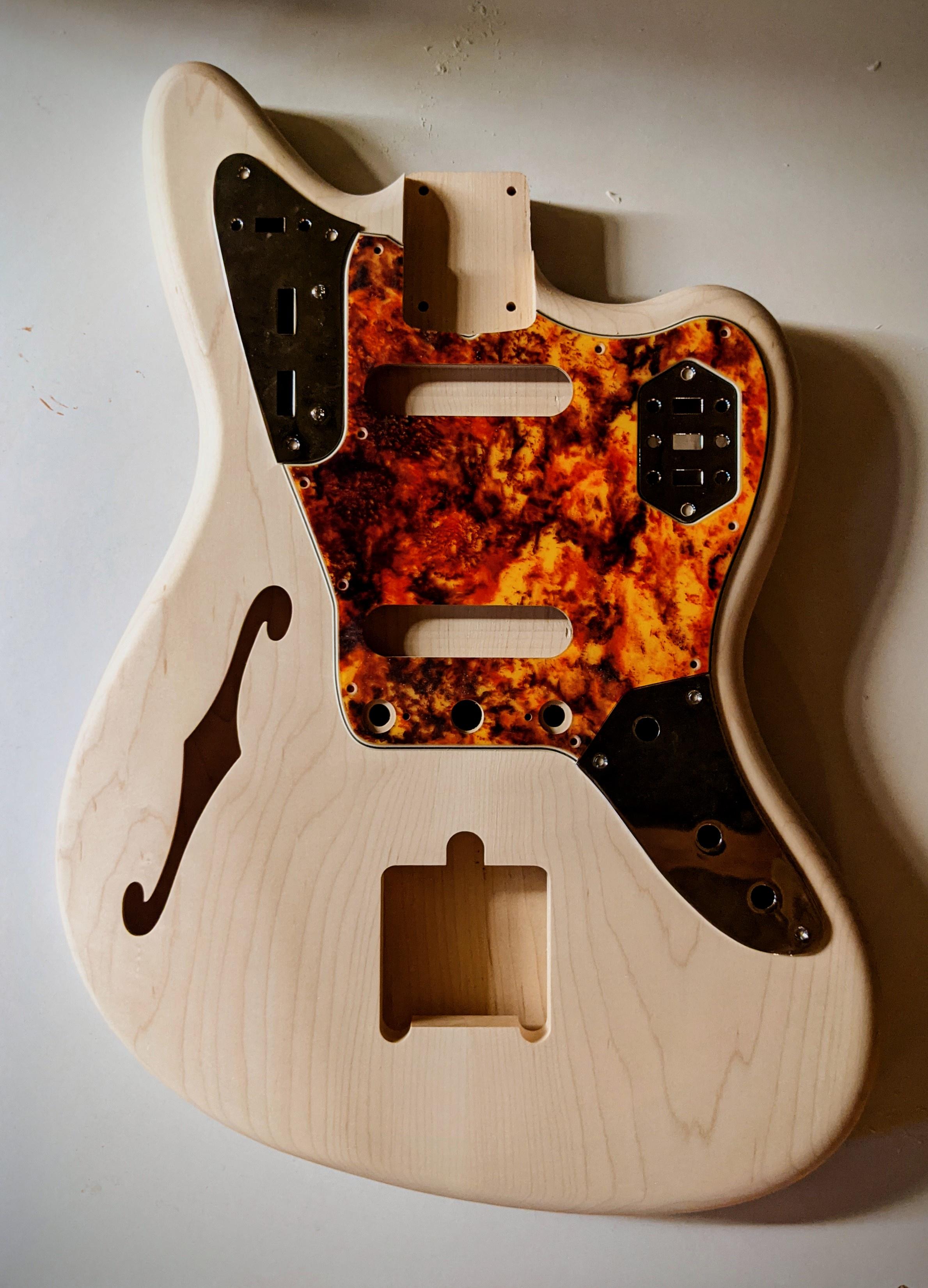 Roundovers done on the Thinline Jag, just dressing her up in some plates! A little fine shaping still needed on the transitions and hand sanding, then she'll be ready for paint. I'm tempted by a Mary Kay white and finally giving this guard a home...

Location
out there somewhere

Deed_Poll said:
Hey guys! Been a while since I've posted a thread but I've been lurking dangerously

Just thought I'd share this project - you might have seen my Thinline Jazzmasters with both contours that I've been making and refining for a few years. But up until now, I hadn't gotten around to making the many small alterations to convert the process for Jag bodies.

It would have been a relatively straightforward task to move the bridge thimbles, pocket, vibrato, route for different pickups etc. But I wanted to do a proper job of it, so I have made the alterations to the body perimeter around the bass side cutaway and also moved around the little bumps and top-underside routing to suit the Jag pickguard screw pattern (I do areas under the top a little thicker where the screws go in).

I like to make the thinlines in either maple or hard ash, and they tend to come out in the low to medium 3lb-range. The Jag bodies have the potential to be lighter still if I cut a weight relief cavity in between the pickup routes (I haven't on this one). 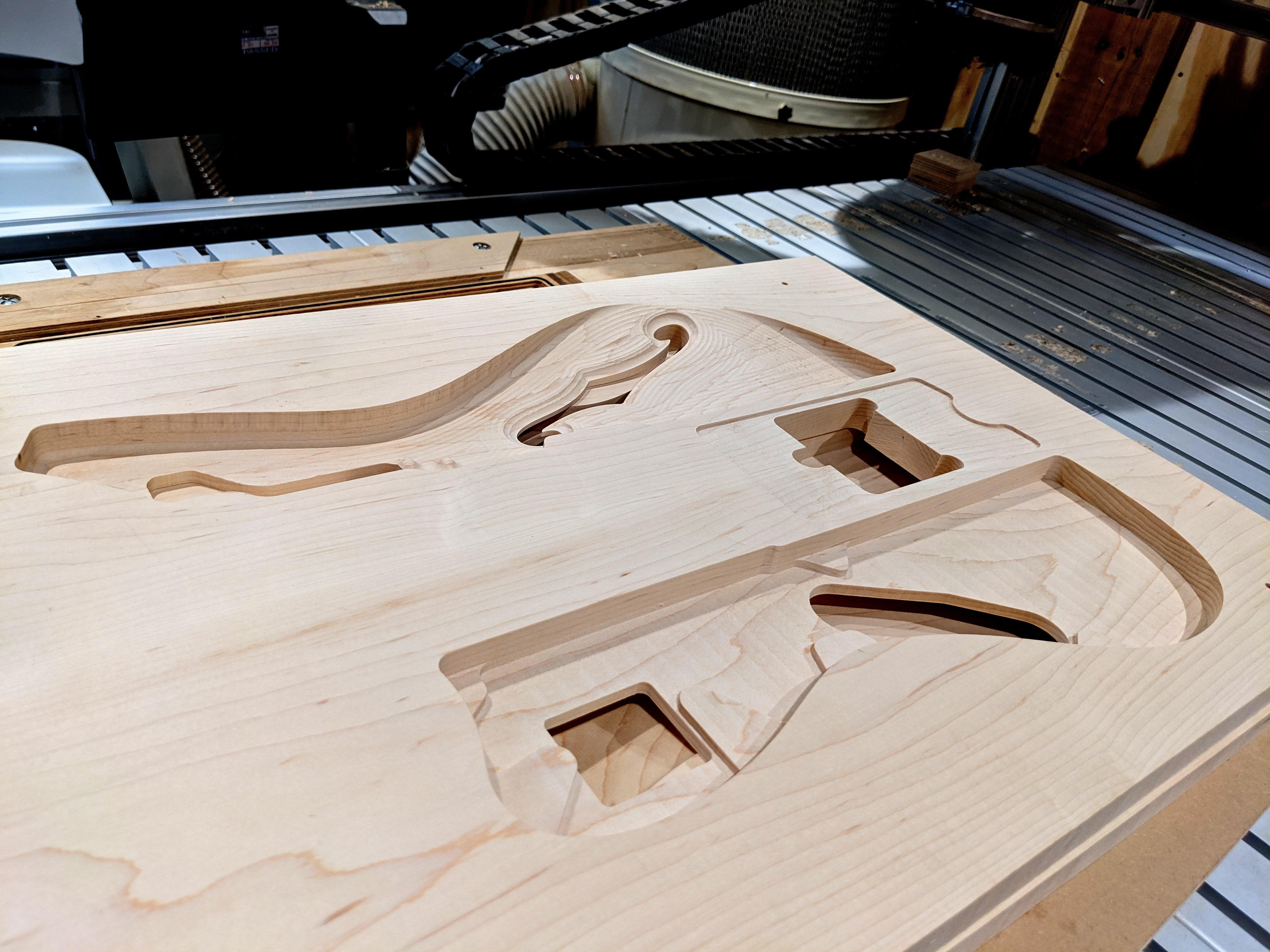 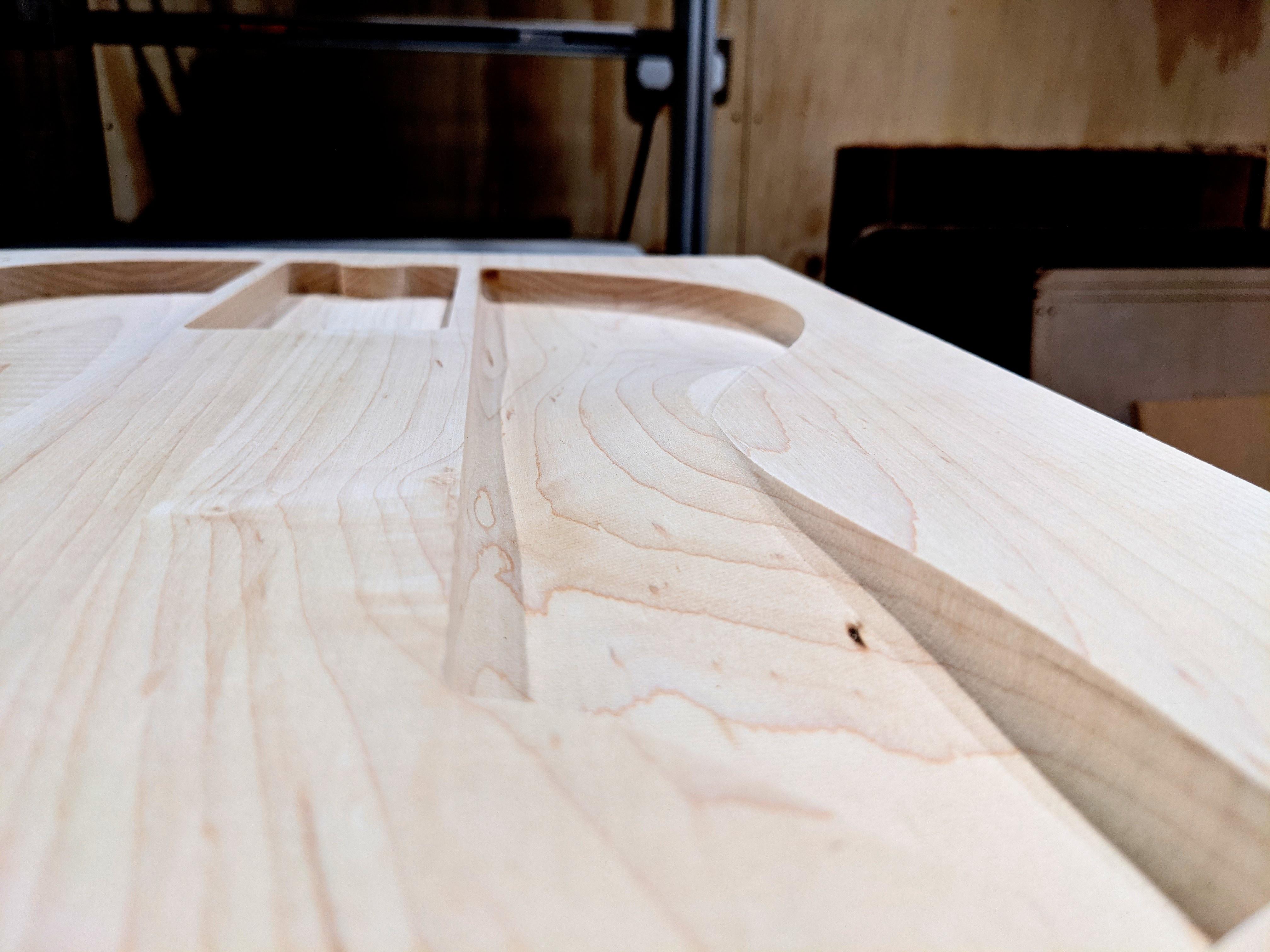 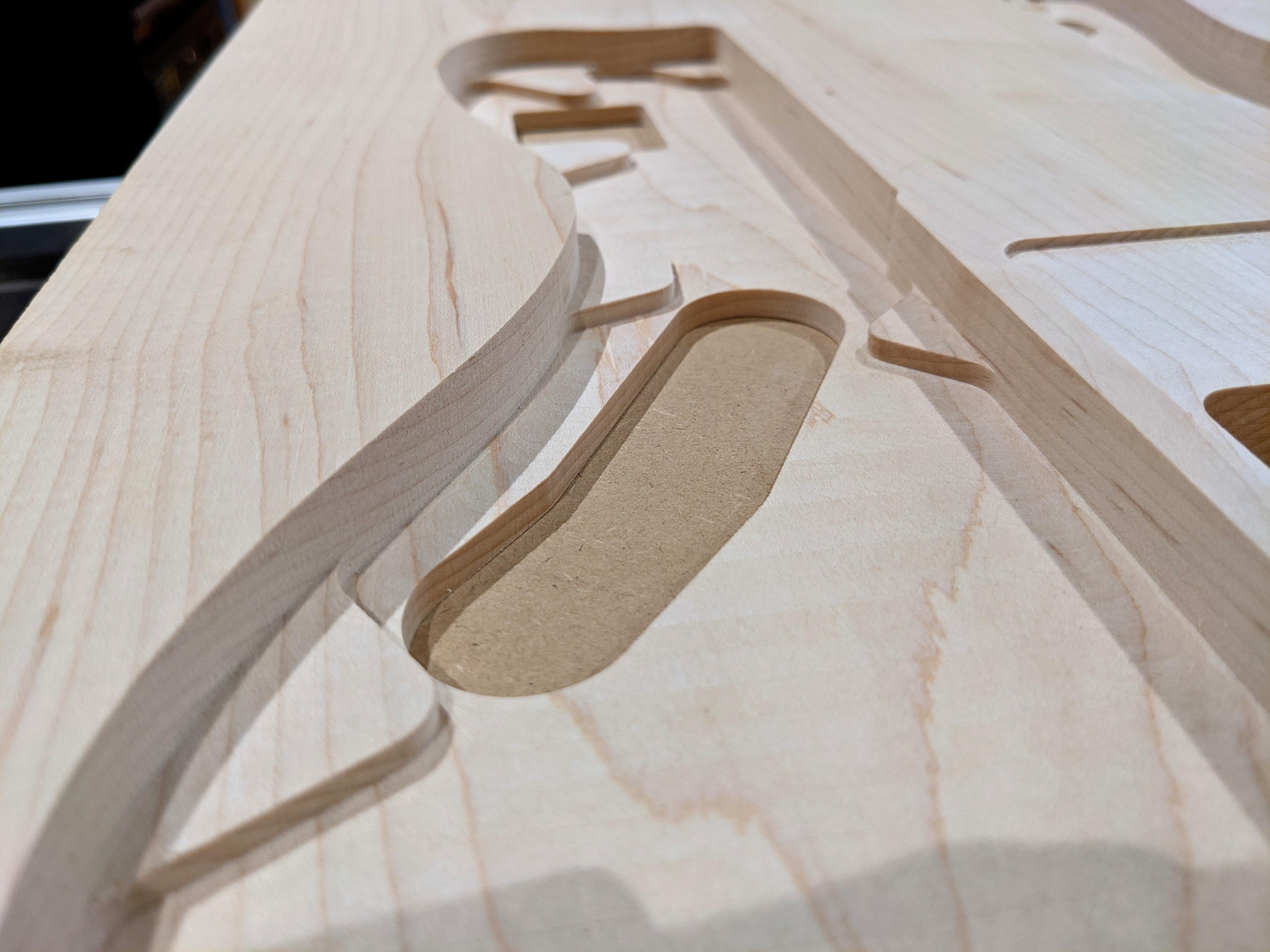 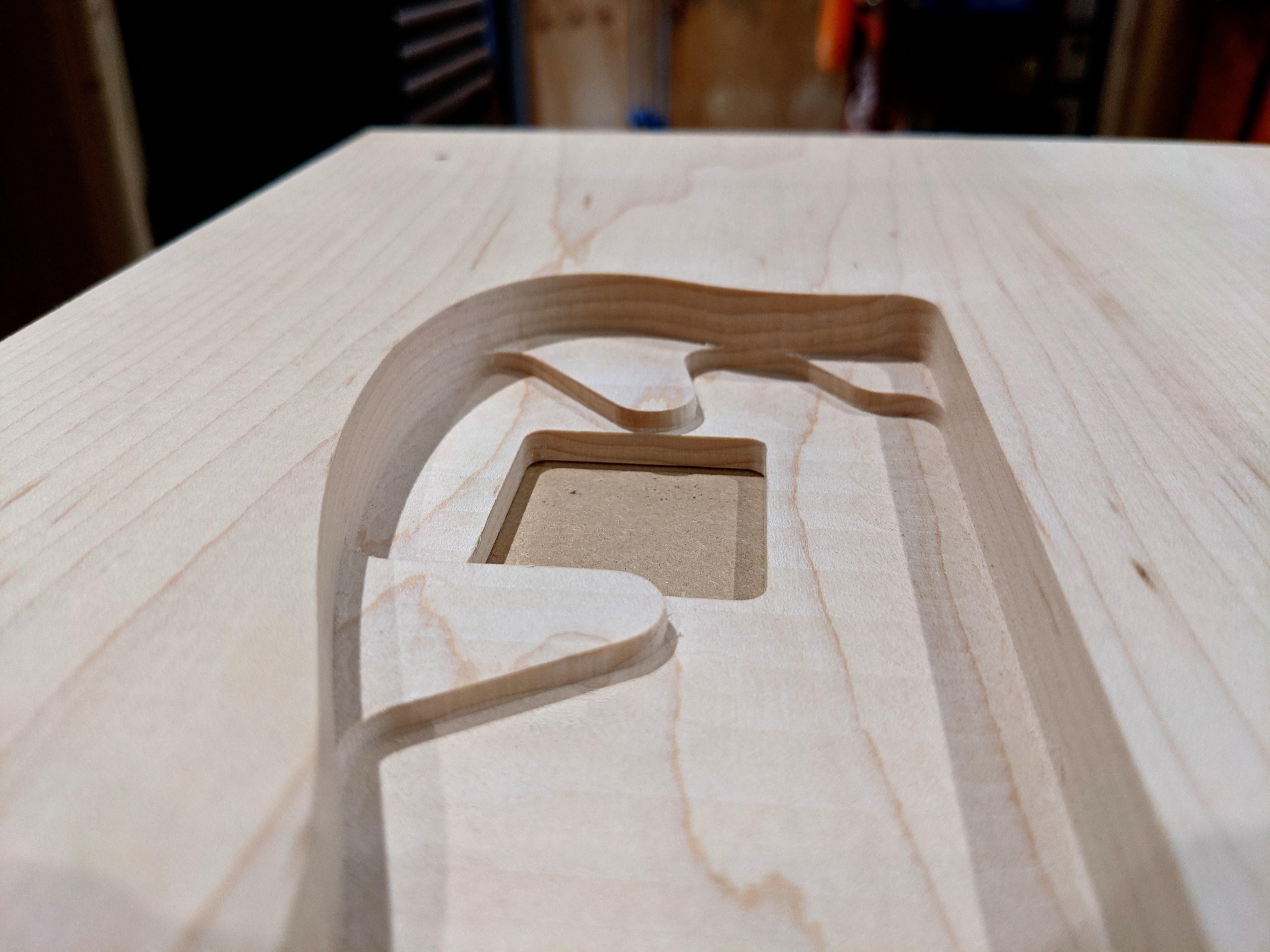 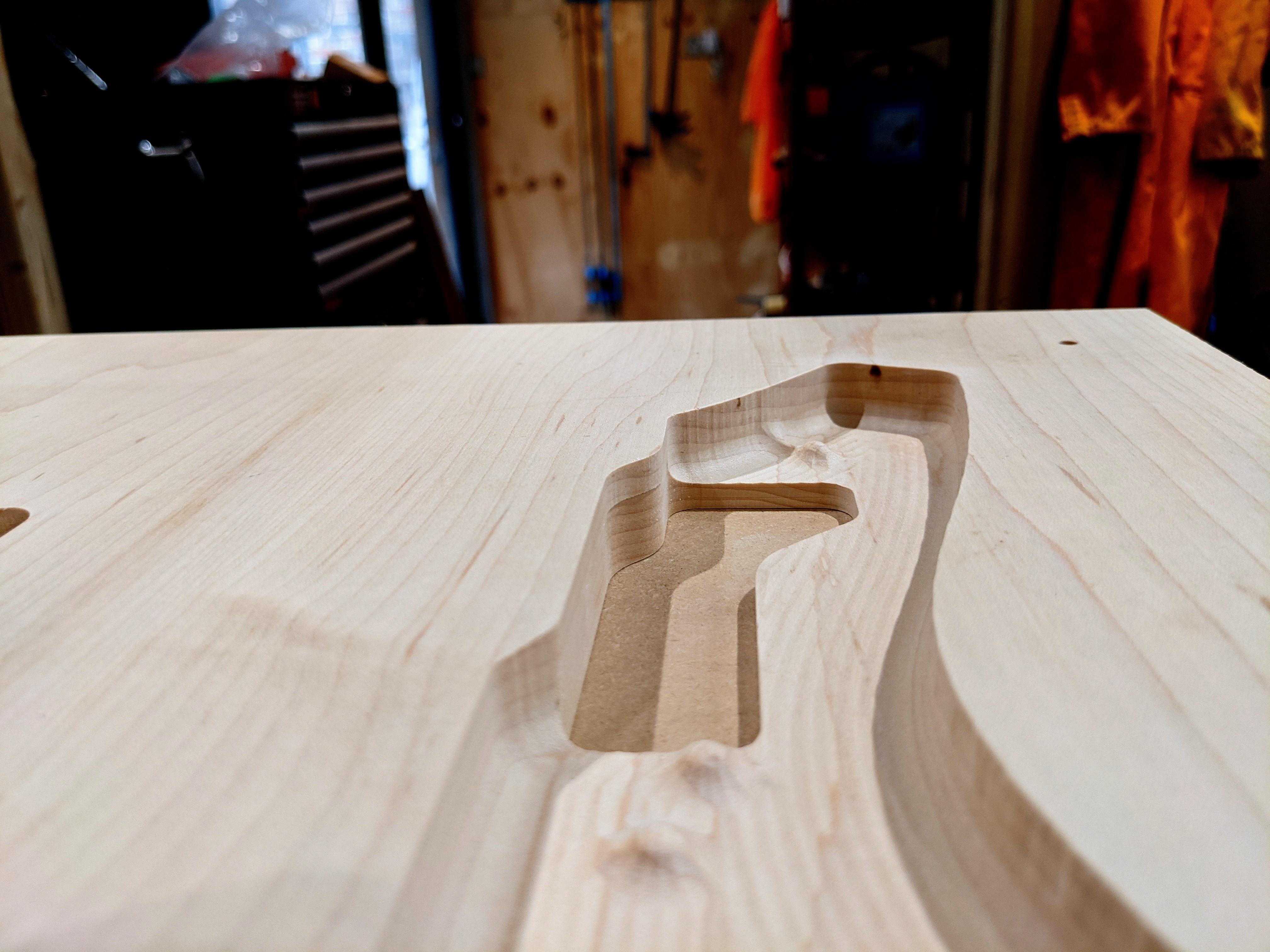 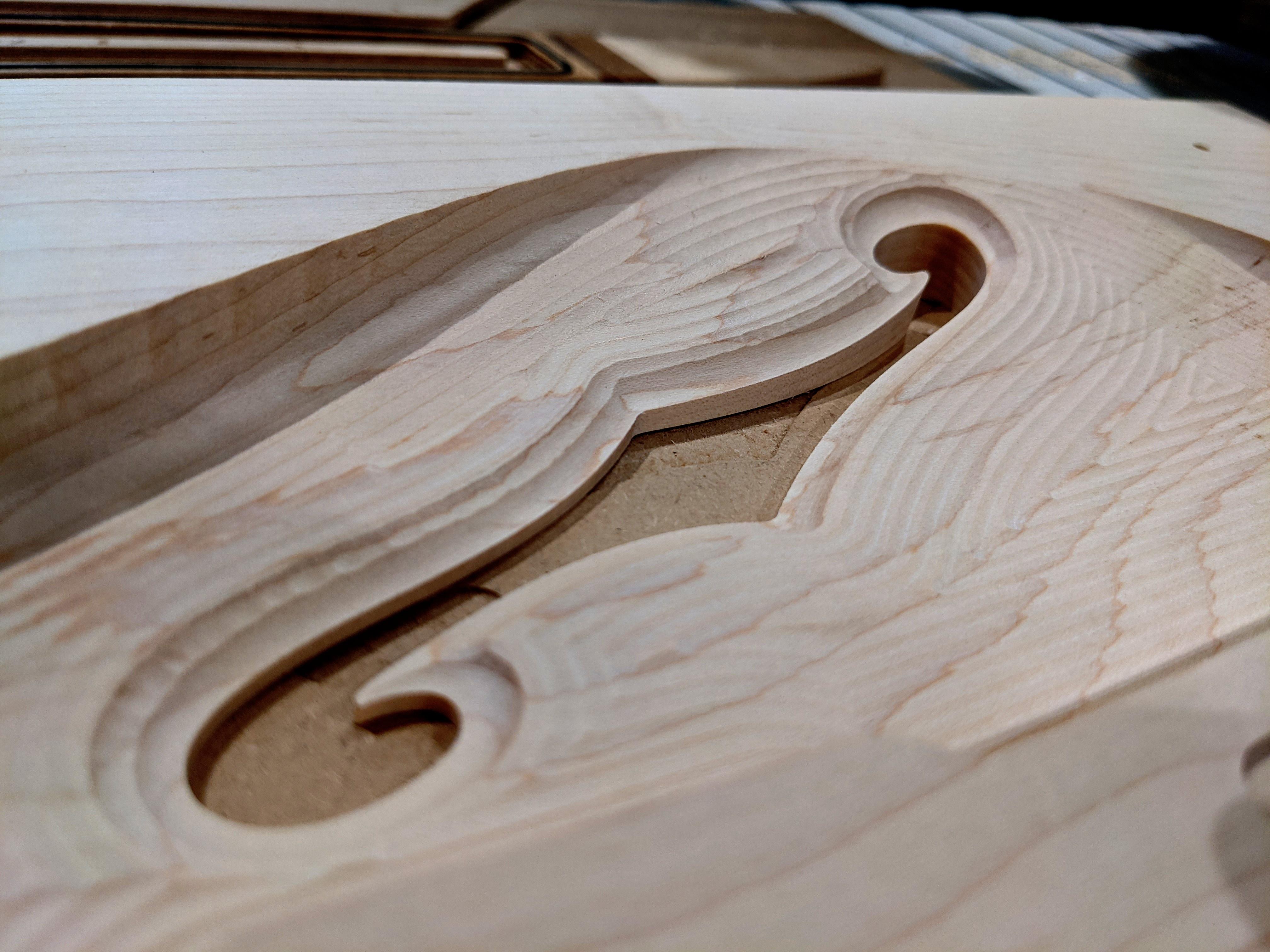 This was day one - cutting the interiors. The front and back were then referenced together with pegs and clamped overnight.

Today, I took the "blank" out of the clamps and cut the exteriors. Here is the result: 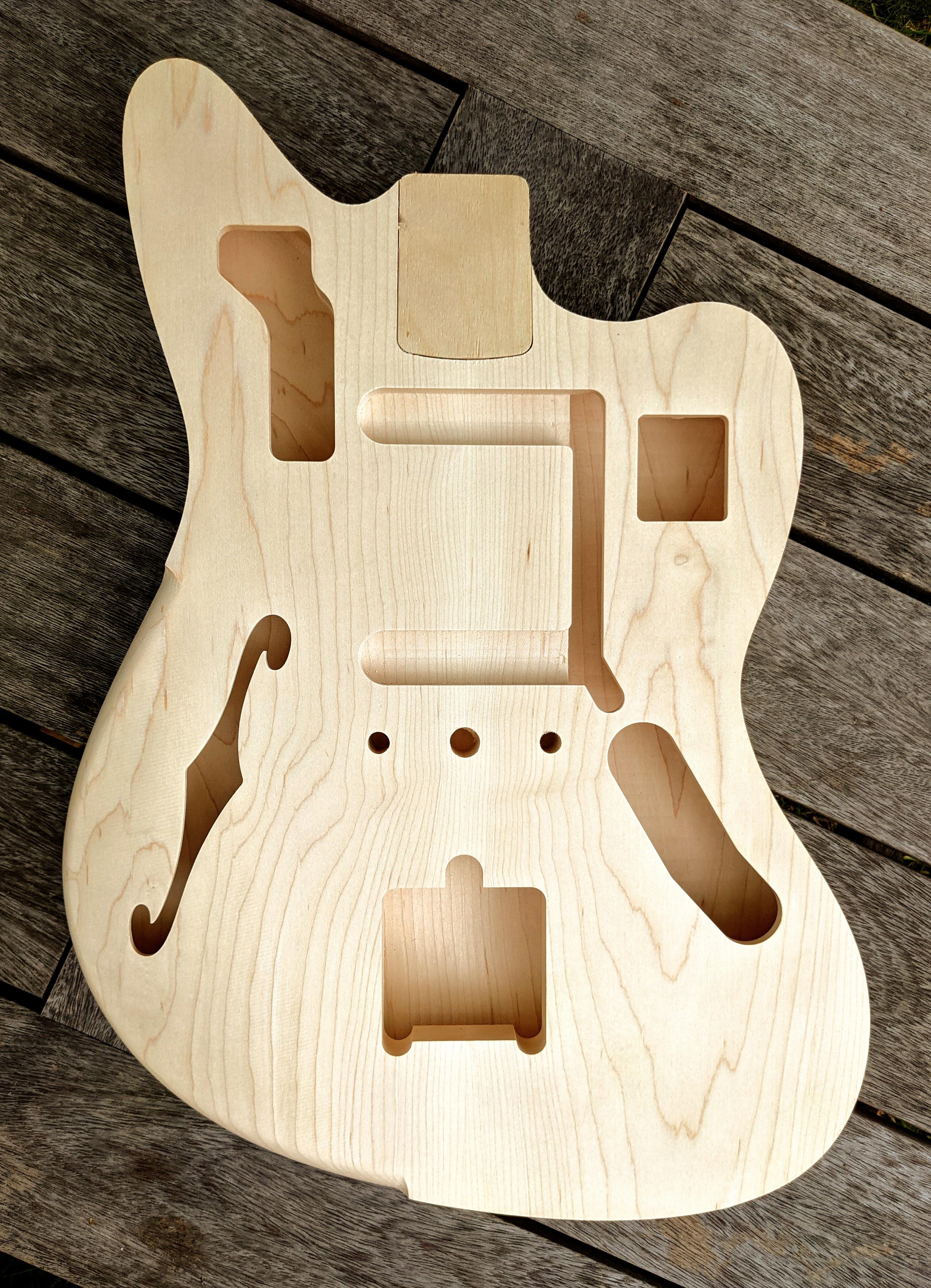 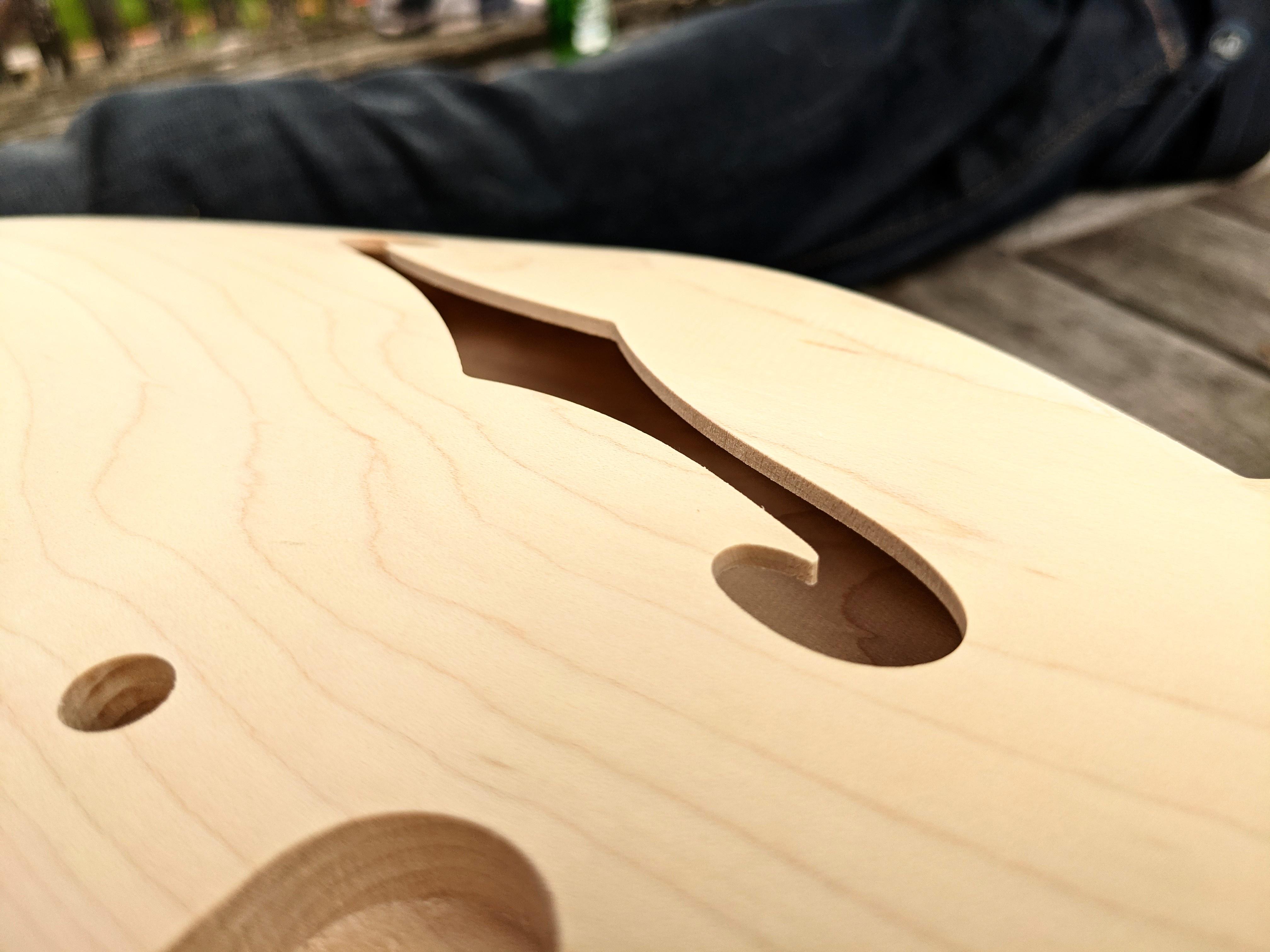 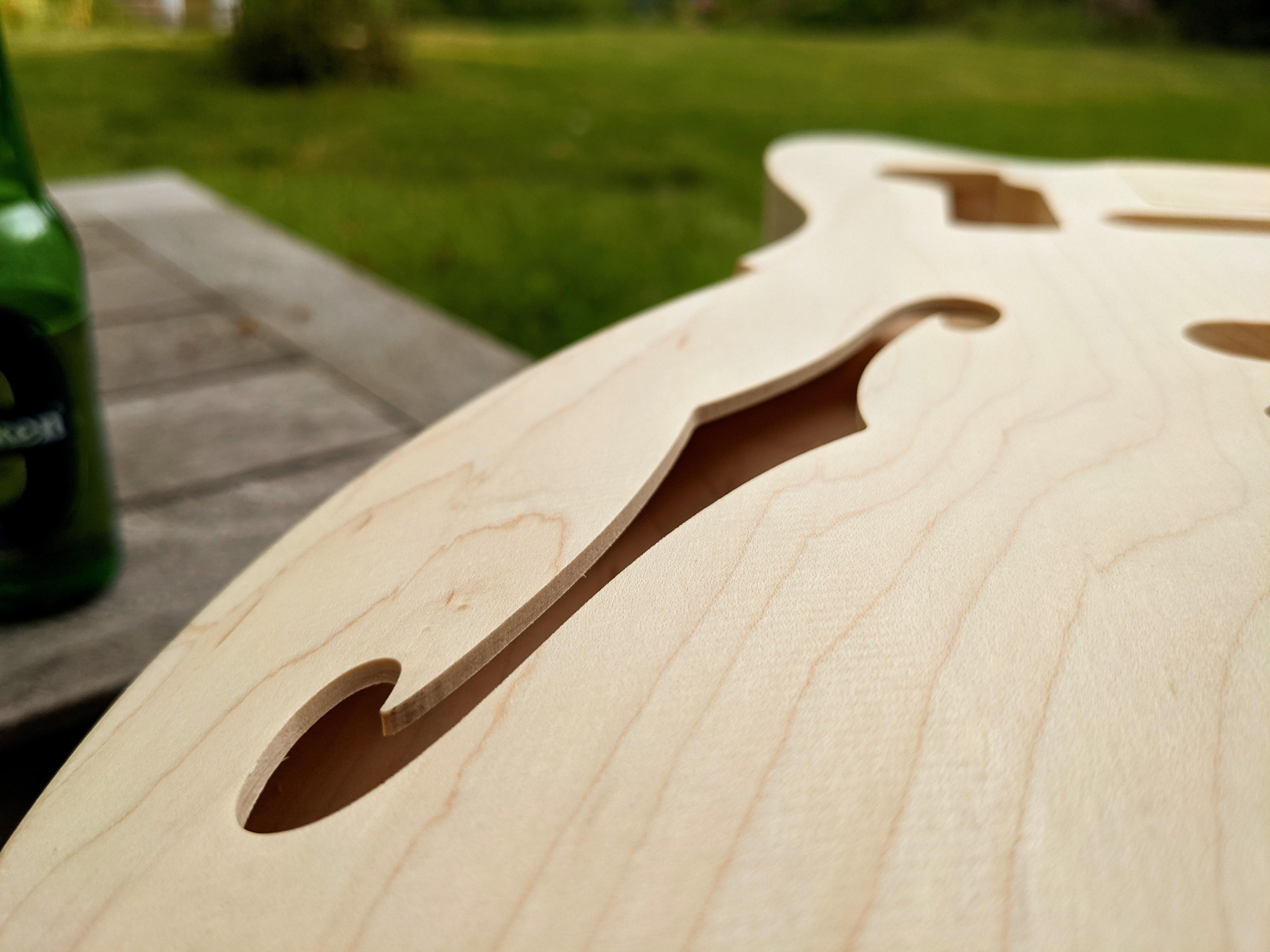 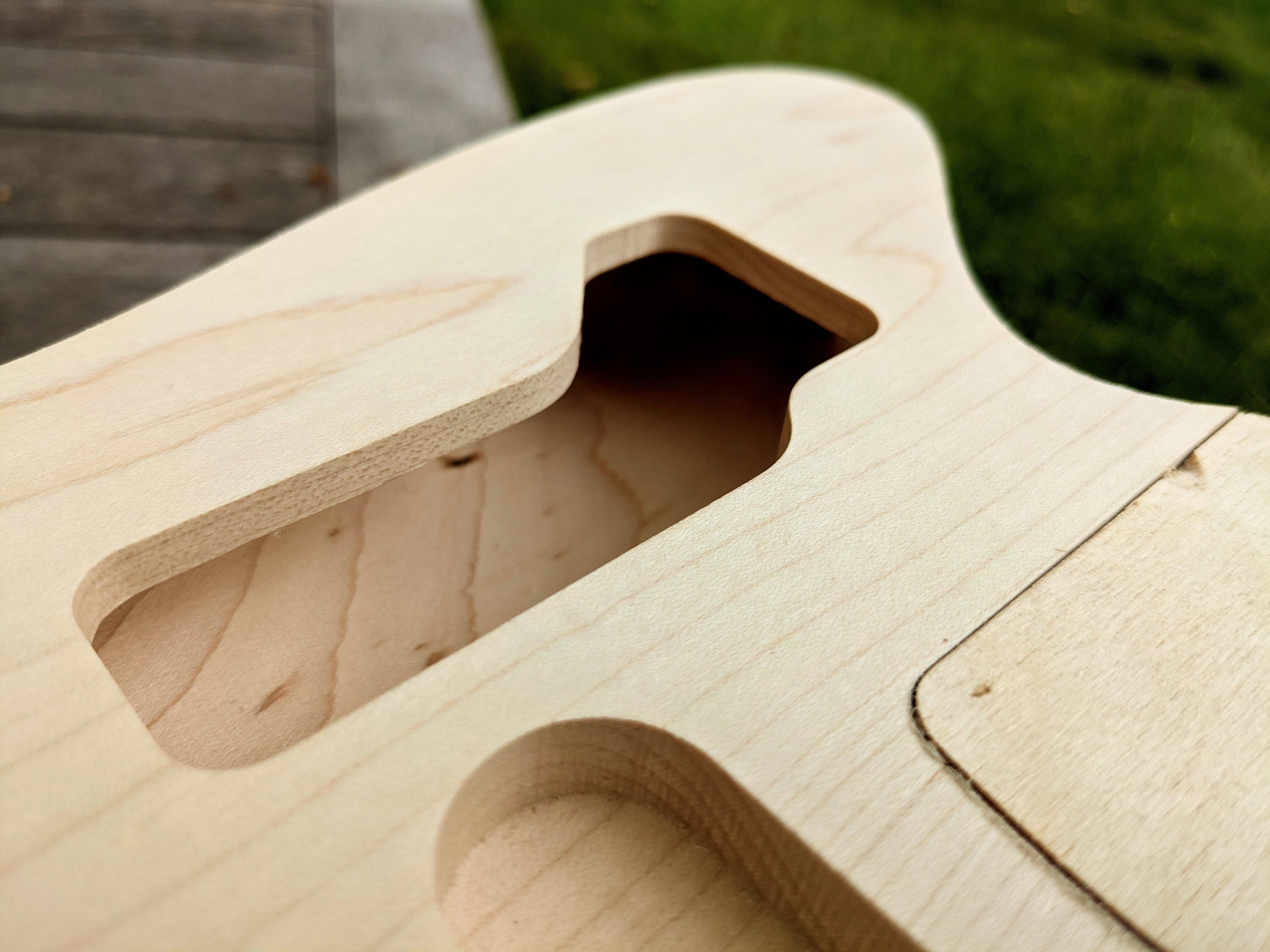 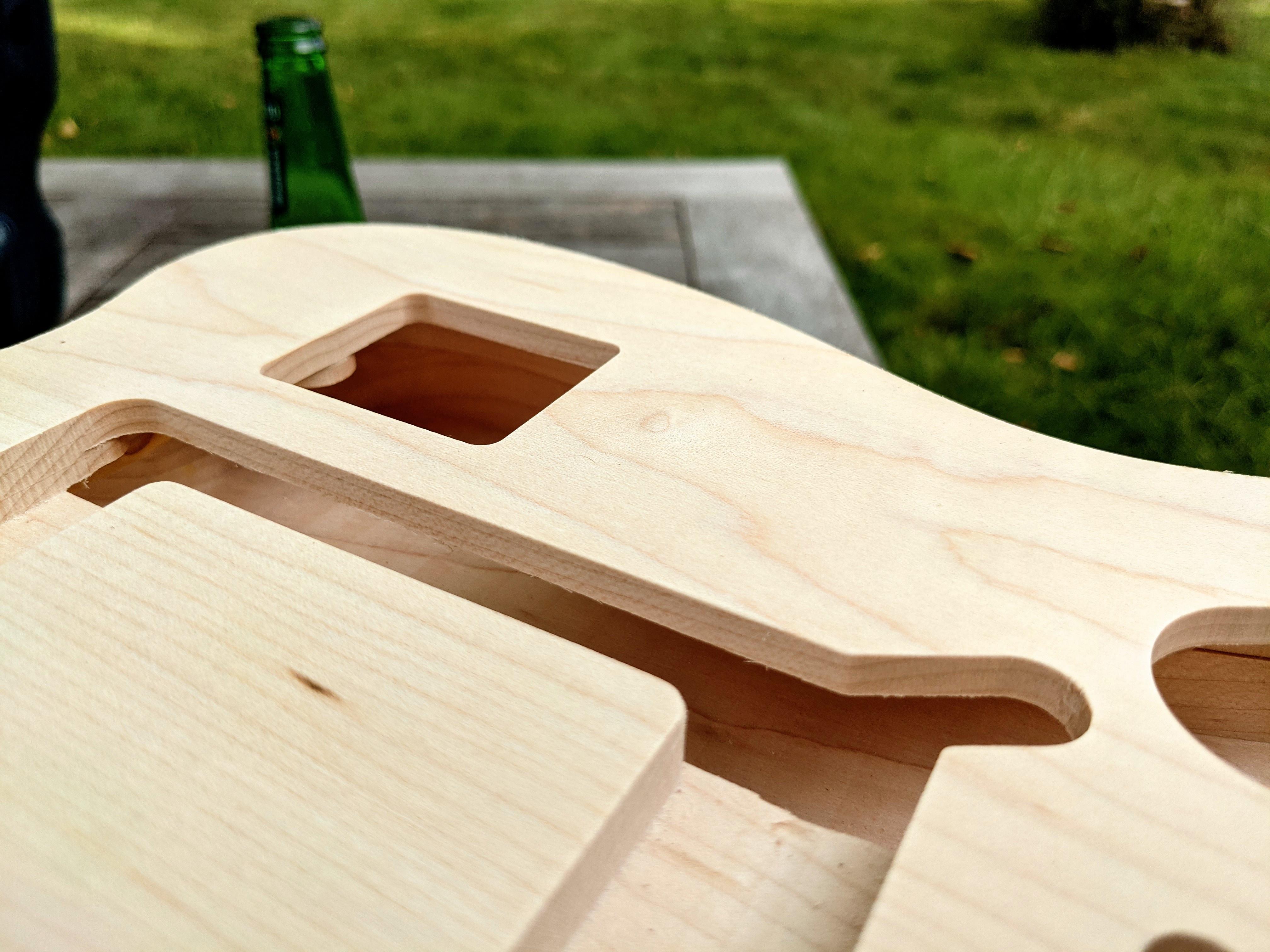 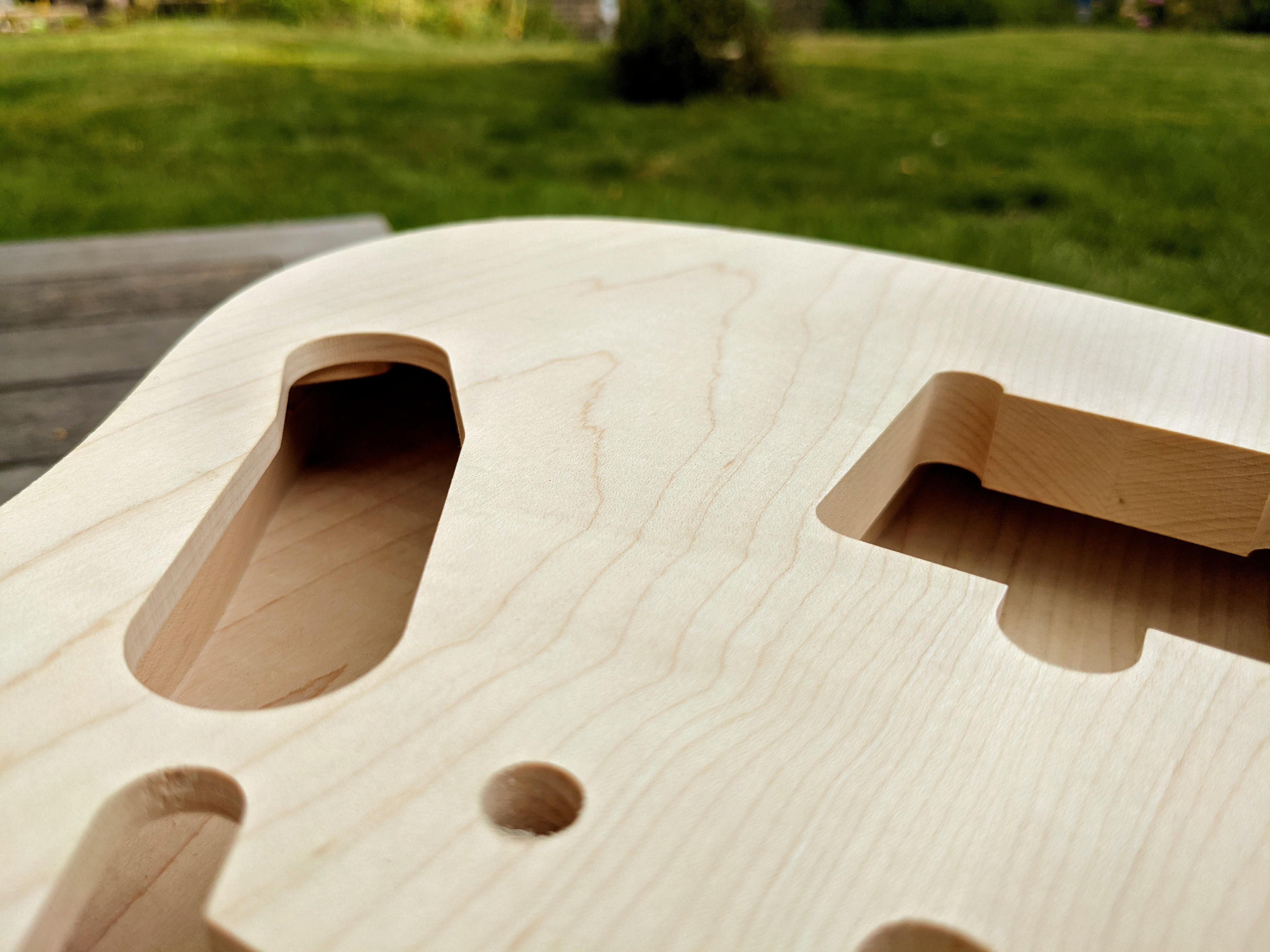 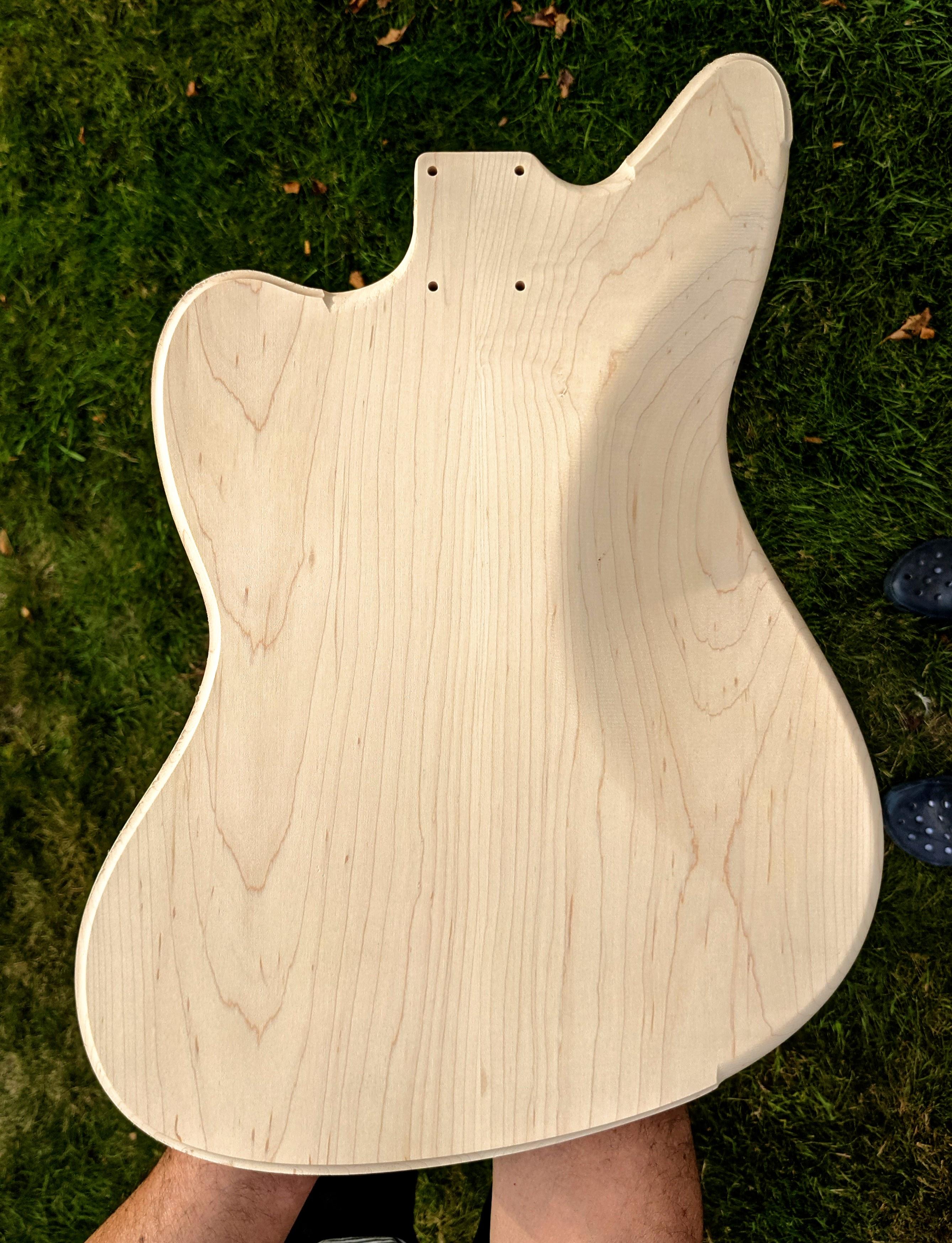 just the roundovers to cut and the machining marks to sand out and she'll be well on the way!

One surprise is that it's actually a fair amount heavier than I was expecting! I didn't realise maple varied so much in density. It also has less wood removed for the pickup and control routes of course, and it hasn't had the roundovers cut and is still wearing its neck pocket buck. But that won't account for how heavy it is!

All the Jazzmasters I've made from maple so far have ranged from 3lb2oz to 3lb7oz. This one is currently 4lb5oz! I guess it won't be much lighter than a solid body Jag, but it definitely has a stronger bonk tone!

It must be the curse of the Jaguar

On the upside, I could always machine out a pretty large rectangular cavity between the pickups if I want to produce a lighter weight one.
Click to expand...

Roundovers done on the Thinline Jag, just dressing her up in some plates! A little fine shaping still needed on the transitions and hand sanding, then she'll be ready for paint. I'm tempted by a Mary Kay white and finally giving this guard a home...
Click to expand...

Oh Thank god! I thought you painted that beauty a solid color! I hope a stain or tinted clear (or both) is in the future. Looks awesome!!!!!!

That thinline Jag looks wonderful. I love how you've engineered the interior.

I've been wanting a Thinline Jazzmaster for some time... and your Ocean turquoise finish looks just about perfect!!! WOW!!

Really nice. It would be a shame to not let the grain show IMHO. Nice wood and you did a great job of matching the pieces.

That is a beauty!
The project concept, and your abbilities as well.

If I had the money I would say more.

Deed_Poll said:
I neglected to mention that this body is made from four pieces of maple, but that all four are consecutive sections of a single long board - so I have managed to "bookmatch" the end grain (is there a technical term for this kind of grain matching?)

I've been wanting a Thinline Jazzmaster for some time... and your Ocean turquoise finish looks just about perfect!!! WOW!!
Click to expand...

Thanks!! I can't take the credit for the finish - that goes to Jon at Rexter Guitars in Norfolk

Can't believe how kind and encouraging all your replies are, it really means a lot to me so thanks for following

Beautiful Jags, I'm in awe of your V-Carve/Apire skills especially on those necks. How much hand filing are you doing vs the cnc shaping your necks?

Deed_Poll said:
Can't believe how kind and encouraging all your replies are, it really means a lot to me so thanks for following
Click to expand...

Ya'teeh, literally, it is good in Danah

TN Tele said:
Beautiful Jags, I'm in awe of your V-Carve/Apire skills especially on those necks. How much hand filing are you doing vs the cnc shaping your necks?
Click to expand...

Well it depends, this is the first Jag I've done, so it's to be expected that the toolpaths need a little tweak here and there to make sure they're not doing anything too drastic! This one needed longer than most after coming off the machine.

I put quite a lot of work in at the front end to save handwork - partly out of "laziness", but mostly because I obsess over all the little transitions between roundovers and contours, contours and faces, and where the roundover tightens up around the neck pocket in my CAD; so I like the finished piece to represent that - and I know that letting myself loose with a file is only going to stray further from it!

So you'll notice I have the CNC take care of the roundovers on the contoured sections, and a little bit beyond in some cases as I have the roundover radius smoothly ramping up or down towards those areas. I probably do more on the computer end than most, but it's not to say that a lot of finessing and shaping isn't required, because it always is (as I'm sure you well understand!)

Incredible!
You must log in or register to reply here.

Poll: Custom "f" hole shape for thinline Tele-Jag hybrid build- which do you like?
2 3 4