The thread for the “might as well be sober” among us…

All a bit wishy washy pour moi, these are a nice pair of 9% honeys from Belgium, dispenser fresh at the correct 5° C. Kwak works nicely, the Rituel is thing of beer joy, and I can see how its feeling courtesy of my iPhone...drink less but drink better. 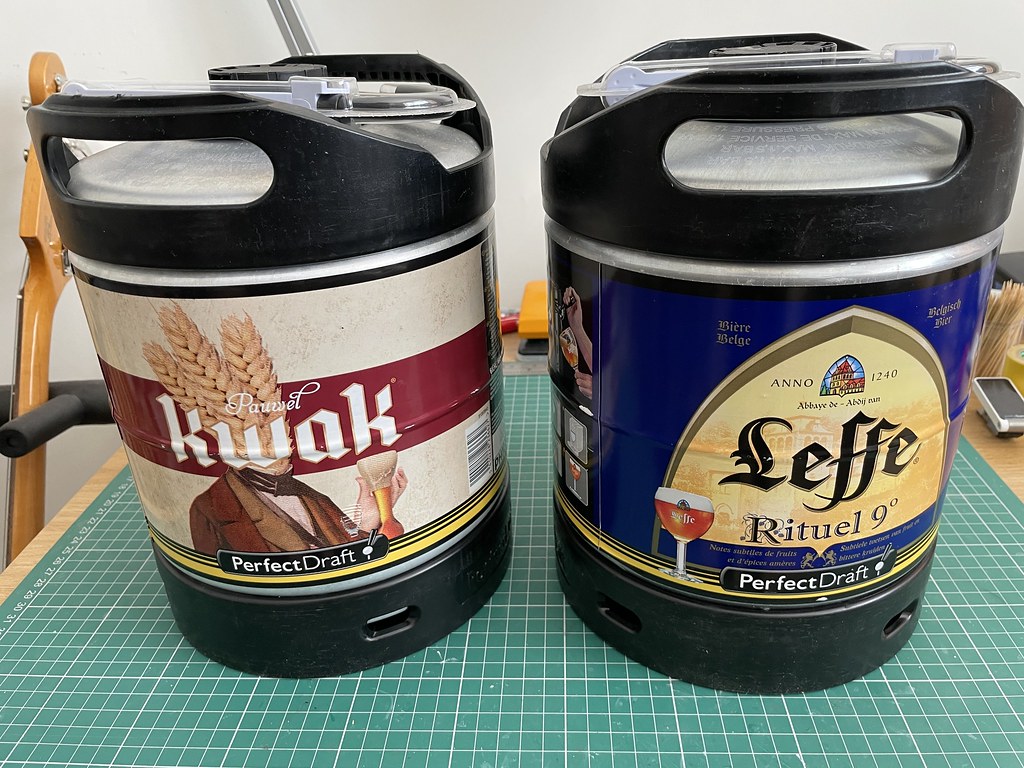 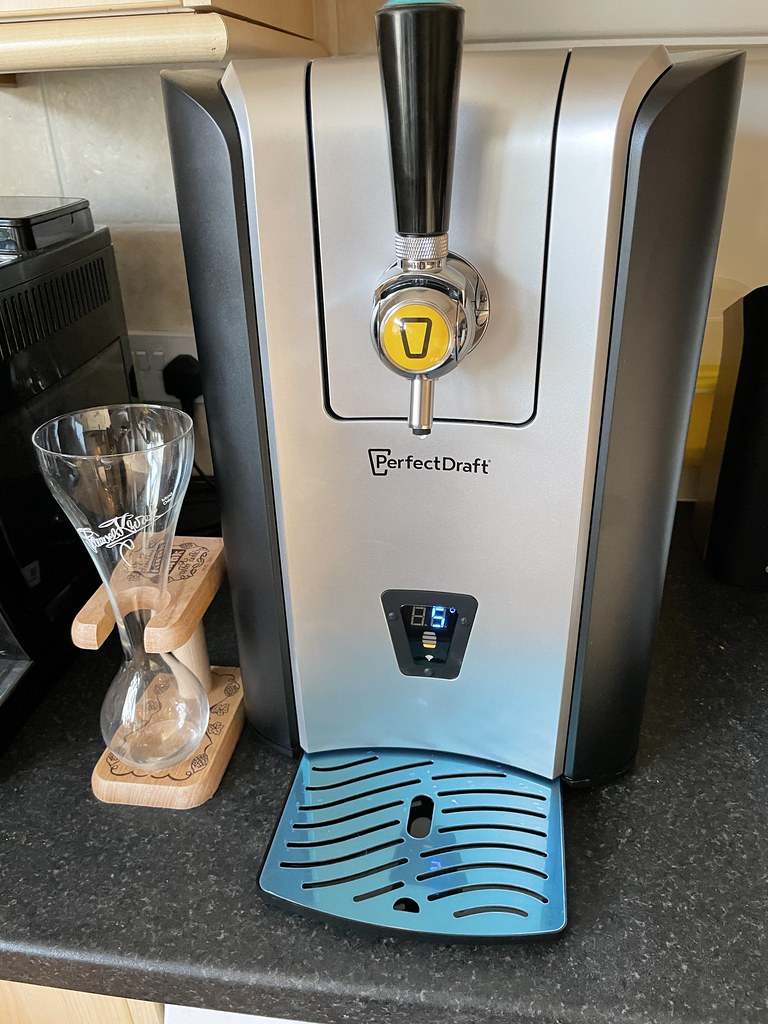 I guess I'm in the same boat.
I have bottles in the cupboard. One vodka, one rum, one whiskey. Each are 3/4 full and each purchased well before Christmas pre lockdown. In the fridge are cans of Guinness and I think a bottle of hard cider. I say "I think" as if it's still in the fridge, it's been pushed to the back.
I'm really into drinking homemade lemonade (with stevia instead of sugar), tea and a once-a-week coffee.
Probably from knowing I can get out of control and the last time I went on a bender I was hungover for two and a half days. Also because I remember in my younger times my drinking bill for a couple of months was the same price as a Precision bass that I had my eye on.

azureglo said:
All a bit wishy washy pour moi, these are nice pair of 9% honeys from Belgium, dispenser fresh at the correct 5 C. Kwak works nicely, the Rituel is thing of beer joy, and I can see how its feeling courtesy of my iPhone...drink less but drink better.

cool you even the kwak glass. In the words of jean carmet, what is the point of having only one drink ? You mess up your health for no good reason. He was a humorist.
R

Mike Eskimo said:
So here’s raising a glass of nothing to all of those of us who are frankly too freaking boring (not too virtuous or better than anyone) else to have a drinking problem.

And of course, to sincerely offer all of our congratulations/best wishes/one day at a time high-fives to all of those who actually struggle.

I’ll raise a glass of water or air and toast to that. I more or less stopped drinking at all over the last few years, except maybe for a special occasion; I simply lost the desire to do so. For those who wish to question my taste, I was into stouts, porters, and scotch. To be honest with you, I don’t miss it at all, and I certainly don’t miss having my senses dulled.

However, what I have noticed is that my not drinking can make people uncomfortable. I pass no judgement, or even comments, on what friends and band mates do, but they tend to act like there is something wrong with me because I never want a drink. We’re weird about alcohol in Pennsylvania, I guess. We celebrate someone having a drink or ten to take the edge off, and we celebrate someone who gave up drinking because they couldn’t handle it, but someone who simply doesn’t feel like drinking gets treated like the oddball. Still, hears to being too boring, dull, tedious, dull, mundane, and dull to have a drinking problem.

We had my mother's funeral last week. I drank a shot of Fireball, and probably had three or four beers across those three days. That was a heavy weekend of drinking for me.

I now have a half bottle of vodka we got for mixers that will sit in the garage for years, and about 10 beers left over that will last for months.

good call on cans. I only want beer in cans now.

beer and booze last a LONG time at our house and cabin, then we have people over (now) and boom, it empties out and I restock.

I'm glad when people have a bad habit or an unhealthy one and they stop it. But, alcohol, which I enjoy, is not one of those things for me....

After working super hard, I just don't usually reach for a beer. I just want iced coffee or tea or water or a coke...

I understand. I go to my favorite Mexican food restaurant and have a cold Corona, always. I buy a six pack, put it in the refrigerator and it stays there until its born on date is equivalent to mine in beer years.

unixfish said:
We had my mother's funeral last week.
Click to expand...

I'm so sorry to hear this.
Losing family is hard.

Married people are having sex now?

Nogoodnamesleft said:
I used to wonder how on earth people could amass things like wine collections. Seriously, having it around and not drinking it? How?
Click to expand...

That was my definition of alcohol abuse.
D

All this lager! No wonder you're all giving up. It’s a shame they have to market Budweiser as Czechvar in the US. They were going long before that other Budweiser, and there’s no argument a customer could ever mistake two brands. Only one of them makes beer!

Without effort I drink a lot less than I did during the plague. That was an interesting time. Nothing but bad news everywhere you turn. Stuck at home. So I had a tendency to pour a rye or two. Almost nightly. Today I have 1 beer at band rehearsal. About 1-2 a month. If company drops by I'll offer my guests a beer. I'll have one too. That's about it. Not much rye moving out of the bottle at all.

effzee said:
live in Kulmbach (check the label on those Mönchshof bottles).

Yes I have been to Kulmbach during a tour of my band in the early 80s,the best beer in the world is made there IMHO.

I absolutely love the Maerzen ,the Zwickl is a bit weak for my taste.

Nick Fanis said:
Yes I have been to Kulmbach during a tour of my band in the early 80s,the best beer in the world is made there IMHO.

I absolutely love the Maerzen ,the Zwickl is a bit weak for my taste.

In those days, there were still the four main breweries, EKU, Mönchshof, Sandler and Reichelbräu. Reichelbräu made a move to buy out the others and consolidate all of them under the name Kulmbacher. I think that was in 1996. Mönchshof and EKU remain as independent brands, along with Kulmbacher, and the beers are distinctive but all produced in the same facility.

The only good Zwickl in this region that I'm aware of is from Aktien Bayreuther. They've had it for many many years and it's more robust than others, very creamy foamy. It's what I'll order when eating out if it's available.


Give that a try if you can find an importer.

It's a little sacrilegious for a Kulmbacher to admit that the Bayreuther brewery does something better, lol. But all of their beers are really good. The Landbier is excellent

The Kulmbacher breweries don't do very good specialist beers in general. EKU remains one of the best traditional Pilsner in the world, though, which isn't a coincidence as we're basically using the same water as the Pilsen region across the border. And of course Kulmbacher Festbier is unparalleled.

As an euwth drank beer like a fish, then only when at the bar, with the family maybe 1 with dinner and now a six-pack can last more than a year. Recently mrs w. ask if we wanted a six-pack due to being summer and all. Nah, if we want a beer lets just walk to one of the local micro brew pubs for a fresh one...there's only 6-7 within a 5-10 minute walk.

However, out talking over the fence with one of the neighbors who handed my a local "hoppy citrus" non alcoholic, no carb, no calorie thing that was quite refreshing without any of the weight...but had a familiar resemblance of beer. I don't remember the specific name of it but could imagine could be the next lemonade or ice tea thing. 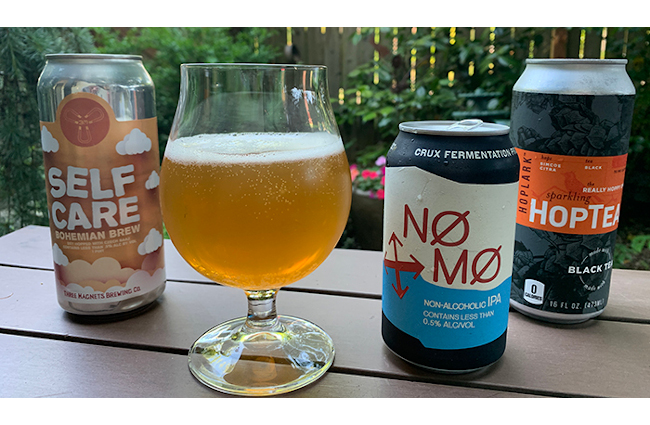 Non-alcoholic beer has taken a turn. We explore some new, and delicious, alternative beverages designed to appeal to real beer lovers.