The reason we have so many guitars.

The optimal number can be easily calculated via a simple equation. 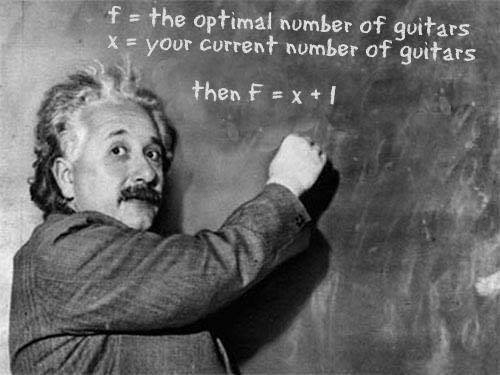 I'm a freak because I only need one guitar. However, I have five. Three will be for sale soon and the extra is a BC Rich Warlock that I use as wall art. I'm relatively new to electric guitars and after some tone searching I finally realized that all I need is a strat with stainless steel frets, a Helix and stereo studio monitors. I'm set.

When I was a poor salesman who knew that stagnant inventory is a bad investment, I'd often wonder, "What could I sell? Is there anything I'm not using that I could sell?" I still have that attitude and it helps me to keep down inventory. In spite of that, I have about 8 pairs of snow skis but I just decided to sell 3 pair.

I had started to write a song about guns, tools and guitars but never finished. Maybe one day

Because they are purdy.

Why do I have 10 guitars? Good job and poor impulse control.

With a bunch of guitars I can ignore my lack of talent and feel like a Rockstar!

I mustn't've gotten the memo. I only have 6 (including 1 bass)

i have 8 right now, 4 that i use regularly - tele, SG, 335, guild ce-100. have only bought three (and sold two) guitars in the last 15 years, most stuff is from when i was younger. i need a bass (don't have one at the moment). i would like an acoustic archtop (that i'll trade for) and maybe a cheap baritone. but i have projects for all of them, they're tools as much as stuff to gush over. if i had started playing as an adult and not had taken such a winding path, realistically i'd only own like 5 or 6.

i've worked with guys that had like 50+ guitars. they would get excited about stuff they absolutely didn't need, like some special run cheapo or whatever. sometimes stuff that was cheap clones of vintage stuff they already had. they would drop money, take them out of the case and play in the office for 15 minutes, and then pack them back up to sit there in the corner for years. i realize we all need our little dopamine hit but uh, i don't know, buy a cheap pedal or some pickups something. it'll provide you with the same 15 minutes of joy for a lot less money.
Last edited: Dec 27, 2021

I like to ( try to) use everything I have for gigs, electric or acoustic ( a lot of the same songs, duo, or electric band).

So for me I collect guitars ( all cheap), for kind of the opposite of ' specific guitars for specific types of music,' thing,
but rather, ' let's hear how each different guitar sounds/plays for everything in the repertoire!' - it's away to amuse myself.

I just bring one guitar to a gig, and I only have one of each type of guitar
( 1 Strat, 1 Tele, 1 SG...). So my collection gradually expands with the next type I want to try.

I used to own both P-90 Gibson-styles, and semi-hollow or hollow body guitars, but now have neither.
So maybe those are up next?
( but nothing for a while)

I'm glad someone wrote about me.

drumtime said:
A guitar is just a tool, and you need tools to do a job. I have some socket wrenches to work on my car, and there are dozens of them, and they're almost identical to each other - like a 16th of an inch difference between them. Nobody complains about me having those.
Click to expand...

This is just how I think of it.

The guy in Khruangbin has one guitar, a strat. I think I read that he only has one pick. He does have a number of pedals. Laura the bassist has two basses, an SX Jazz bass and a cheapo violin bass. She does wear a lot of fashionable outfits, but I don't think she owns them.

They are pretty good, but I think their shtick is wearing a bit thin now. Maybe they need to buy some guitars!

I have said this statement for many years "Guitars are like Lay's Potato Chips.....You just can't have one"........And to quote the great Forrest Gump "and that's all I have to say about that"

I'm wretched. I should be spanked. Often.

It's funny he thinks that we've fixed scarcity and live in a world where everyone has exactly what they need.

I’m in the guitars as tools camp. Each of mine does something the others can’t. So when I need to do a specific thing I have the right tool.

Here is what comes to mind.

In the early 80s a close friend had a job running a high end restaurant. Part of his compensation was housing on the very large estate owned by the family that owned the restaurant. The housing was a very well appointed three bedroom carriage house attached to the stables. The stables had space for a dozen horses. The woodwork in the horses stalls were all made of hardwoods. The place looked like something from a 1930s movie. I was never allowed to visit in the main house but otherwise when I visited anywhere on the rest of the estate was open for viewing.

During on of my visits my friend said, "I have something to show you" so we walked a short distance to a large building. The building was originally constructed for indoor Dressage instruction. So (I just looked it up) it was at a minimum an area of 60' by 180' with a 40' peaked roof. The lighting inside was excellent. It had not been used for anything equine for a several years. Instead it had become storage for large things. The most visually arresting object was a thirty foot or so large wooden boat lying on it's side like it had been dropped there by a bored toddler. Completing the abandoned toy box look of the place was a Lincoln limousine, a fire truck, a jaguar and a pop corn cart. There were other items there that I don't recall specifically. It wasn't crowded on the floor of the arena and none of the items looked broken. The organization was very random.

It was a well preserved collection of high quality things that were no longer amusing.

A bit like my bag of currently unassigned pedals or my ES-175 that hasn't been out of the case since 2018.

I'm curious about new guitars and amps but also am not interested in amassing them.

At one point I had 5-6 high end USA guitars and 3-4 boutique tube amps. It just made me confused.

Totally happy with my Tele, 335, and Matchless. I may end up getting a tweed champ to get something smaller and quieter.

I know OP wasn't serious but I think it's OK to consider the idea of excess especially because I think most musicians are empathetic and are connected to nature.

I just went over 30 and it's kinda getting ridiculous, but I'm attached to almost every one in some way.

My goal for 2022 is to reduce quantity and increase quality.

Location
In the woodshed

I actually bought 24 guitars this year alone, and I had quite a few to begin with that I had bought in previous years.

Sold 7. Gave 7 as gifts and am now down to 22 guitars that are keepers.
You must log in or register to reply here.

Why I can NOT have too many guitars

S
Have you ever sold a guitar simply due to value?
2 3