It was in a tiny apartment in the Hancock Park area of L.A. My future wife and I were there because the host was a friend of my roommate's girlfriend and future wife (and ex-wife), who now lives with a woman. I don't think the roommate's girlfriend really wanted us there. Sofia Coppola was there playing her mother's 16mm films. The McDonald brothers from Redd Kross were also in attendance, along with Charlotte Caffey of the Go-Go's, who would go on to marry one of them. On reflection, this was undoubtedly an AA/NA crowd, which was why there was no drinking, which I don't recall minding at the time.

Peegoo said:
Last week a DJ on a local college radio station was talking about Brandi Carlisle and stated, "formerly of The Go-Gos..." I laughed out loud on that one.

Belinda has recorded with many other artists, including the Smithereens. She has a lovely voice.

Jane "Drano" Wiedlin played Joan of Arc in the film Bill and Ted's Excellent Adventure. She was hawt!
Click to expand...

She also had about 10 seconds in some other film I disremember. The front door of the apartment (Edit: house) opens from the inside and Jane's standing there in the doorway delivering a cheerful singing telegram, wearing the uniform, little hat, and everything. She's immediately shot dead, falls in a heap, and that's it.

studio1087 said:
I think Belinda runs around barefoot in a cocktail dress screaming her head off for most of it.
Click to expand...

Well now that reminds me of what it was like to be married.

Filmed in 2001. I think Belinda runs around barefoot in a cocktail dress screaming her head for most of it. They look and sound. I love this DVD. 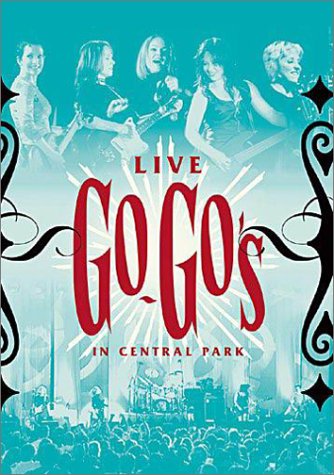 Gina Shock was the producer of the video. The movie featuring Jane Wiedlin as the singing telegram lady is 1985's "Clue."

People tend to forget that Gina Schock had a band with Ellen DeGeneres brother, Vance DeGeneres, who would go on to be a correspondent on "The Daily Show."

My copy of the notorious Rolling Stone underwear cover, autographed by the entire band. Gina wanted me to do lights for House of Shock. I went to a rehearsal and did like them. Gina came to LA with Edie and The Egghead's from Baltimore. Edie was the egg lady from John Waters films. Gina told she knew Belinda was out of control when she offered Gina some a day after heart surgery.

Manual Slim said:
Signed or not their first single came out on Stiff and that's good enough for me.
Click to expand...

Totally. I saw them at 688 in Atlanta probably near the end of that era because about a year later they were headlining the big houses.

Killing Floor said:
They are cool and don't get the credit they deserve.[...] In fact they were almost signed by a punk label.
Click to expand...

They absolutely were a punk band in the beginning. Probably unrelatedly, I understand they had a terrible reputation for trashing hotels.

If I lived in Vegas, I would seriously consider seeing them.

Daddydex said:
I'll pass on the Go-Go's but if you see Birtha playing somewhere I might check them out.

Or The Shaggs.
R

I saw Fanny at The Starwood in 76 and there were the real deal, Rush opened the show and could not hold a candle to Jane Millington

Rick Schmidlin said:
Gina wanted me to do lights for House of Shock. I went to a rehearsal and did like them. Gina came to LA with Edie and The Egghead's from Baltimore. Edie was the egg lady from John Waters films. Gina told she knew Belinda was out of control when she offered Gina some a day after heart surgery.
Click to expand...

Carlisle's autobiography is depressing much in the same way that Anthony Kiedis' is, because after awhile it becomes a monotonous series of rehabs and relapses.

You should start a thread and regale us with Ray Manzarek stories, which I assume you have in abundance. If I'm not mistaken, Eddie Munoz of The Plimsouls also worked on the Hollywood Bowl project.


Rick Schmidlin said:
I saw Fanny at The Starwood in 76 and there were the real deal, Rush opened the show and could not hold a candle to Jane Millington
Click to expand...

There's an animated Fanny concert sequence in the final season of Bill Burr's "F is for Family" on Netflix.
W

Rick Schmidlin said:
Plastic does a alot.
Click to expand...

A cuckoo clock could spring out of her chest where her heart is supposed to be and I would still be totally enamored.

Go Go's trivia - Belinda Carlisle was once the drummer for The Germs, under the name Dottie Danger, but she got mono and they replaced her. Trivia 2: before selling out to top 40 pop superstardom, they toured the punk circuit with bands like Madness and The Specials.

archetype said:
A really good band that's "cleaned up" from their punk roots. Gina Shock is my favorite rock drummer and still a badass in her mid-60s.. She's got taste and power that's not overpowering. She's the driver of the band and keeps things from leaning too far in the pop direction.

It'll be a good show. I hope they make a video that we can see. Here's a taste of a long, live gig:

I just watched this over my lunch break. They sound amazing live! They really bring it. I always liked them but now I have an even bigger appreciation than I already did. Gina Schock is throwing down hard as is the whole band. They are one of those bands where each member is a special, unique ingredient. Really Jane Wiedlin could have been the lead singer and rhythm guitar player and the band would have probably still been successful but having Belinda Carlisle front the band just raises the bar even higher. I admit it, I had a Belinda Carlisle poster on my wall in high school.
Last edited: Dec 9, 2021

Since I graduated high school in the early seventies, the Go-Go's were not a really big deal to me, though I did enjoy the music. However I really didn't pay much attention. So two things I've learned from this thread: that Belinda Carlisle was a massive drug addict (I always thought she was the clean one) and that when I thought she was singing "now that I see you", she was actually singing "our lips are sealed". You learn something new every day!