The FENDER "Evil" Twin Amp (NOT the Red Knob)

jimmynumber9 said:
The red knob is "the twin", I believe they had an "evil twin" afterwards.
Click to expand...

Correct. The Evil Twin has black knobs and says "Evil Twin" right on the grill emblem. The red knob twin is the lowest power of all and is certainly not evil in any way.

Lostinthe50s said:
Correct. The Evil Twin has black knobs and says "Evil Twin" right on the grill emblem. The red knob twin is the lowest power of all and is certainly not evil in any way.
Click to expand...

Post a pic that backs up what you're saying.

I got a RK Twin back in 1986, and I still own it. People started calling them "Evil Twin" around 87 or 88, and then there was a version with black knobs, around 1990, and then people started saying THOSE were the evil ones... I think it's kind of silly.

I added another RK Twin as a back up in the 90's, I believe that one's an 87 model. Still have both of them. Never had any problems with the 86, but I lent the 87 to Lucky Peterson for a gig here in Dallas and he knocked it off stage and broke the input jack... It's fixed now, and maybe it's not point to point like a 57 Tremolux, but I'm sick of people bashing these amps...

Robben Ford is known for using RK Twins, and I think he gets a pretty tone out of his... If you can't get a good sound out of an RK Twin, I'm willing to bet it's not the amp's fault.

Lostinthe50s said:
Correct. The Evil Twin has black knobs and says "Evil Twin" right on the grill emblem. The red knob twin is the lowest power of all and is certainly not evil in any way.
Click to expand...

If you play it with the EQ knobs "default" at 5 or 6, you will lose volume. The EQ section actually cuts volume to each band as it's turned down. You only get full volume if all knobs are on 10, and hardly any sound if they're all on 0. It's not like a regular Fender EQ that only changes tone, but doesn't affect volume.

I have always understood the "evil" twin to be the amp designed by Paul Rivera introduced in the mid 80's. The addition of a distortion/gain channel and red knobs made it the "Evil Twin". Not sure when they dropped the red knobs (almost all the amps in this time frame had red knobs my M-80 I had back then had them). Here is mine. I believe it is a 1990 version.

I did some research on this subject and I owned both the red knob "The Twin" and the black knob "Twin-Amp". People generally call both Amps, back and red knob, the Evil Twin. It has become common nomenclature and therefore all uses are valid. However there is only one variation of the amp where Fender used the term "Evil" in it's marketing materials and that is the PR266 black knob Twin-Amp. Regardless of the appearance and some feature differences I believe they use a similar circuit design.

Got one this week. So far, I love it. The "three" channels make it pretty versatile.

Here it is, on top of the loudest amp stand I know of:

Running these two in stereo is a bit loud for my study...

Anyone have a tube function layout for one of these? Apparently Fender helpfully pulled online schematics down some time ago.

I bought one of these new at some GC sale when existing stocks were dumped in 2002-3 after the 2001 (?) one was introduced with the stronger and even HEAVIER cabinet. Getting it in the car wrecked Photoweborama's back, getting it out of the car wrecked my back. Got it home, checked that it worked and rolled it off into storage as a health hazard where it stayed until today. By some miracle, it still works, though a gain pot or two is scratchy and it seems to have a slightly higher noise floor than I remember (not bad, but this is a pet peeve of mine). Replacing the preamp tubes with vintage ones often (not always) cleans this up in my experience, so I thought I'd give it a try.

I've had one since around 2000. It's super loud and heavy. I still have the coasters on mine. So I just wheel it around when I can. I usually run it on 25 watts. Maybe in 20 more years it will be pretty rare. 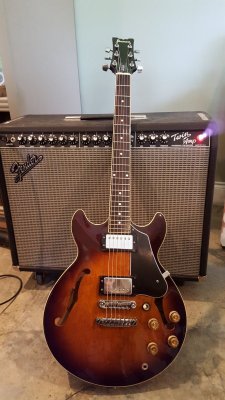 I have never heard one!
I bought a chassis once from one that fell off the stage, but never got a chance to even see if it works. A friend wanted it! He got it running with minor repairs, put it in a head cab, and made some money on it. He thought it was more Boogie than Fender.

Skip Reid said:
I've had one since around 2000. It's super loud and heavy. I still have the coasters on mine. So I just wheel it around when I can. I usually run it on 25 watts. Maybe in 20 more years it will be pretty rare.
View attachment 532195
Click to expand...

I always used it on 25 watts also. I really liked the sound at that setting. Sounded 'tubey'.
I still have it but it started red plating about ten years ago so I set it aside thinking I would get to trying to fix it but of course that hasn't happened yet!
You must log in or register to reply here.