The butt of all car jokes, BUT I dont think this car is ugly

psallo said:
Did people regard these ugly at the time? It just looks like every other car from the 70s to me.
Click to expand...

we thought they were lame. AMC was not a brand that many people thought were very innovative or cool.

I had a friend who had a green one... It was a couple of years old and had rust holes in the floor boards......

One of the gears didn't work often and an aerosmith cassette was stuck in the deck, so same songs all the time....

Yikes! I could countercounterpoint all day but instead I'll simply say touché. (rhyme intended)

Sconnie said:
Yikes! I could countercounterpoint all day but instead I'll simply say touché. (rhyme intended)
Click to expand...

The Kia is definitely fuggo, and I honestly had to check that they were still making the Murano vert. It really is the new Aztek.

Again, I give you the "butt" of all car jokes, what my neighbor called the Pontiac Asscrack.

In my 1.5 million + miles of total driving over my lifetime, this 2003 Aztek has 277,000 miles on it and does almost anything; easily my best overall vehicle. My friends and family constantly borrowed it.

The best is 4'x8' sheets of plywood flat in the back with the clamshell hatch lowered. 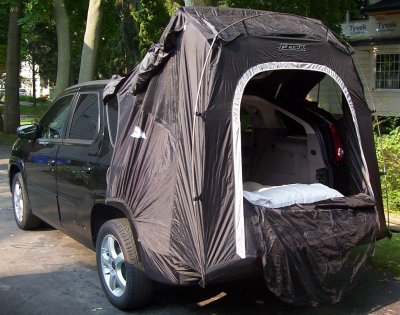 buster poser said:
The Kia is definitely fuggo, and I honestly had to check that they were still making the Murano vert. It really is the new Aztek.
Click to expand...

The original Rondo is a disaster. The tiny wheels and compressed minivan combo is just bad bad bad.

That's what that is! The freakin Murano convertible cabriolet hahaha! What a joke.

And as seen above, the Aztek, is actually coming around in terms of appeal. Thanks to Breaking Bad and the crossover craze, it isn't as bad as it used to be. Never thought that would be a car ahead of its time...

I think most people missed the desperation amongst the U.S. auto manufacturers in the 1970s. Japan had entered the U.S. market by storm and we had an oil crisis … twice. Pumping out crap (and ugliness) across all four companies to compete became a 20 year debacle and in essence never recovered.

I don't think that the Gremlin was ugly, and for that matter, neither was the Pacer. I would have no problems driving an AMC Pacer around... especially if it had woodgrain vinyl on the sides.

Nahtabot said:
I grew up with Nash's, Rambler's and AMC's.

Learned to drive with a '74 Matador with bias ply's. Good times.
Click to expand...

He bought the car new, then went to Kenosha to pick it up at the factory and drove it back to southwestern Minnesota.

His was Chocolate brown over mint green, but otherwise the same as this example.

It had a rather 'pudgy', appearance, but it also had an exceptionally low drag coefficient and was quite economical on fuel because of it, for it's size. I think it's a beautiful car.
Last edited: Oct 27, 2021

bgmacaw said:
It was, for the time anyway (my time being when I was a high school senior in the mid 70's). But, when you look at the numbers, it's amazing how weak it is compared to modern cars.
Click to expand...

I know; my first couple of cars in the mid 80s were 1970s GM products with small-block V8s, and I drive a ubiquitous 20teens Grand Caravan now with literally double the horsepower, from a V6 3/4 the size. It would likely smoke the Buick I was so proud of as a high school senior.

But still, the rumbly V8 sound and instant off-the-Line torque, even from a smogger 70s V8, had its charms...
L

My wife grew up with the full array of AMC vehicles. Her dad was the corporate director of industrial relations. She and her sibs all seem to have fond memories of them funny cars.

BUT I don't think this car is ugly
Neither do I.

Ron R said:
I had a buddy who had the (mis)fortune of having two Hornets - his first car, then second when the first one died. Neitherr comfort nor reliability was a strong point with those two.
That said, I'd take an old Javelin in a heartbeat. And I miss the days when they made the Jeep line. I stil remember one very cool aspect of the CJs/Wranglers was that the transmission would bolt right up to a GM small block.
Click to expand...

Yeah! I think the Javelin was their high point. As much as the AMC line has their bunch of criticisms, I think General Motors had their share of jokes as well. Remember the Vega and Chevy Monza? There were so many Vega's going to junk yards that they quit taking them. You know it's bad then.
C 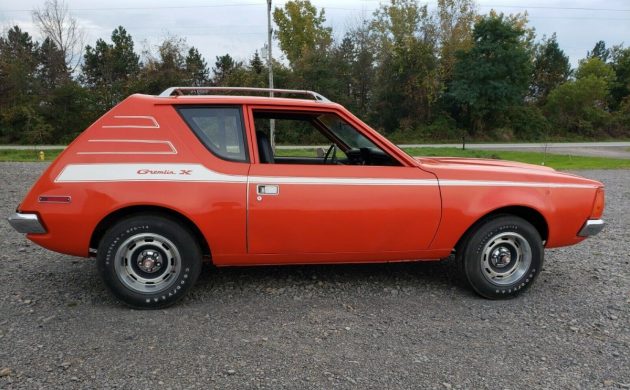 You can buy this '72 Gremlin X right now on eBay. https://barnfinds.com/no-reserve-30...nBAtSPiNiD_6uHBDLYwwSgRAd1i5jzPMRC2eNY6hS8Z20

Don't plan on driving it very far. The tires apparently are original.

You can buy this '72 Gremlin X right now on eBay. https://barnfinds.com/no-reserve-30...nBAtSPiNiD_6uHBDLYwwSgRAd1i5jzPMRC2eNY6hS8Z20

Don't plan on driving it very far. The tires apparently are original.
Click to expand... Sconnie said:
Yeah, I wonder if it was just "ugly" compared to what else was available at the time.

The Kia Rondo reigns supreme for ugly cars these days.
Click to expand...

The Rondo ain't bad; the Soul is ugly!
B

I like the earlier iterations of the Gremlin, better than the one shown, but I would rate the Gremlin far behind the Pacer and the Hornet/Concord. I would never consider buying the Gremlin because there was no mass over the back wheels and it behaved IMO really badly in wet and icy conditions. The Pacer, by comparison, was rock steady in bad weather - but an "Eagle" in any form but the Gremlin was a better choice - a solid winter vehicle for sure. If you asked me personally, what was wrong with the Pacer, I would say, One, too much glass and hard to keep the vehicle cold on hot days and Two, the short wheelbase meant a choppy ride on poorly constructed highways and bridges and Three, it used a GM power steering unit that failed too often. The best thing maybe was the Ford sourced 4 speed manual transmission.

Unusual styling never put me off. I was never cajoled by others into saying nice things about bigger brand cars (that often sold well) because it was a popularity contest. I mean, Gimme a Break! People wouldn't say the truth (or even know the truth) about a Ford Tempo or Chevy Chevette because too many people they knew already owned them and it made little sense to piss off a friend or family member. The Honest to Goodness truth is, folks don't know or won't say, when some cars are awful and why? Because their dad makes them drive one.

So we pick on the product of the smallest manufacturer. What does this prove, if anything?
Last edited: Oct 27, 2021

John Backlund said:
I drove my grandfather's 1950 Nash Ambassador around our town when I was 16. This was around 1967.

He bought the car new, then went to Kenosha to pick it up at the factory and drove it back to southwestern Minnesota.

His was Chocolate brown over mint green, but otherwise the same as this example.
View attachment 913819

It had a rather 'pudgy', appearance, but it also had an exceptionally low drag coefficient and was quite economical on fuel because of it, for it's size. I think it's a beautiful car.
Click to expand...

It's a neat looking car, but by 1966 it already looked like a time capsule. Driving a 2005 car today would not be nearly so anachronistic.

My buddy in High school had a gremlin X 304 with a 4 speed. We put headers and dual exhaust on it. Not bad, it was faster than my 67 Fairlane.

jbmando said:
The Rondo ain't bad; the Soul is ugly!
Click to expand...