The Best Guitar You Never Play

Controller said:
Fender Baja 50s, light weight, great neck, quality construction. Whenever I play it I can't wait to put it down and play a different guitar.

Why do you think that is ?

When I decided to get a solid body electric my heart was set on a Les Paul. But I bought a Telecaster. Now I have 5 Telecasters and still no Lp. I’ve looked at LP’s and played them but never found one that did it for me
Last edited: May 28, 2022

My old SG Pro doesn't get played much. Y'all have seen these before, butt: I coveted the idea of an LP Special with P90s, but figured they'd forever be out of reach. I started buying similar guitars in various quality levels, trying to get the same thing on a budget. This includes the Godin above. Eventually I saw this 2010 LP in Natural and I had to have it (I'm a sucker for natural finishes on guitars). The seller had it listed on both Reverb and eBay. He never responded to me on Reverb, so I contacted him on eBay. He looked at my minimal purchasing activity and basically told me to go kick rocks. Well, one way to make someone want something a whole lot is to take it away from him. It took me four days of pleading to get the guy to sell me the guitar, and he finally did. I've probably played it a dozen times since 2013.

The Godin is an excellent guitar in its own right. It's the one that I pull out every few months to get ready to sell, and then after noodling around on it for an hour or so I change my mind. 2006? MIM Precision Special. Other than the gawdawful gold pickguard there is not a damn thing wrong with this bass. Well, that and it weighs as much as a truck. And the battery compartment is super hard to open. There is no reason for me not to play this bass, other than I'm not as skilled at bass as I am on guitar. (See what I did there?)

Meanwhile, this is the one that sits out on a stand because it doesn't have a case: I forget the year (bought it used) and I can never remember if it's a Vintage Modified or Classic Vibe, but it's a real hoot too. That said, whenever I feel like plonking on a bass guitar, this one is in easier reach.

Are these two basses Redundant? Not really- the MIM is active with roundwounds and 3-band EQ. It has a very modern and intense sound to it. The Squier is passive with flatwounds, and has a very vintage and 'sits in the mix' sound to it. They both play and feel very different, and couldn't sound any different from one another. Both are useful, and the bass tracks in the majority of the music I listen to is probably a 50/50 split between those approaches. Is the Squier as nice as the MIM? Heck no, but it doesn't suck either. Oh, and it doesn't weigh as much as a truck.

I thought this through a few years back.
I took a long look at my guitar collection.
I sold all my electric guitars except my Tele.
I do still have three acoustics.

This, but I'll never get rid of it. My old Carvin DC100. Still solid as new in 1983.
Got an SG last year which has replaced it in the rotation but I'm keeping it for sentimental reasons. 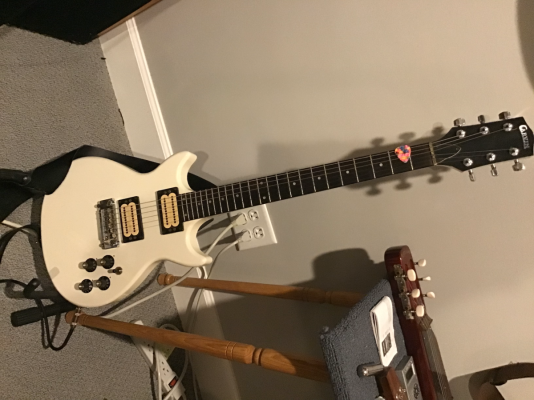 On the electric side the one that gets played the least is my Rickenbacker 330. I do try to make sure it gets into the rotation, but I never seem to play it for very long. As acoustics go, the guitar that doesn’t get played as often as the others might be the nicest guitar I have, my Martin D-28. While I do love it, it is quite loud when played to with a heavy hand or attack, and it’s size isn’t very conducive to laying back on the couch with it.

This is my least played guitar.
I play it at home, but only a little. My EBMM Luke II. It's a great guitar, but it's a little too flashy for me.

It has what appears to be a "finish crack" across the back of the headstock.
Therefore, I'm apprehensive about handling it much.
Although I've got no authentication, it supposedly belonged to one of my guitar heroes so it's more sentimental value than anything.

my strat and tele custom and les paul...im hooked on only playing my LP junior double cut at the moment

before i got that junior...i was rotating those guitars weekly...also include my joe strummer tribute tele

It has what appears to be a "finish crack" across the back of the headstock.
Therefore, I'm apprehensive about handling it much.
Although I've got no authentication, it supposedly belonged to one of my guitar heroes so it's more sentimental value than anything.
Click to expand...

Trophy guitars are a special catagory and it’s quite understandable to play them the least.

2002 Epi Elitist Riviera 12 string. I love the guitar, but in my current gigging pattern consisting of one hour solo shows, it's a bit too much of a hassle to take two guitars for a one hour's playing time. When, and if, I get back to playing restaurant gigs, I'll probably start playing this jewel more. 39martind18 said:
2002 Epi Elitist Riviera 12 string. I love the guitar, but in my current gigging pattern consisting of one hour solo shows, it's a bit too much of a hassle to take two guitars for a one hour's playing time. When, and if, I get back to playing restaurant gigs, I'll probably start playing this jewel more. View attachment 988243 View attachment 988244
Click to expand...

Nice, I’ve had a few 12 string acoustics but somehow never even played a 12 string electric. (yet)

Gardo said:
Nice, I’ve had a few 12 string acoustics but somehow never even played a 12 string electric. (yet)
Click to expand...

I saw this one on Reverb five or six years ago for well under $600, and jumped on it like ugly on my mother-in-law! There's one on Reverb offered for about $3500, a bit overpriced, I think. Seymore Duncan humbuckers and a Fishman. that 3rd knob dials between the buckers and the acoustic sound. the acoustic part has active circuits and some kind of synthetic tone generators or something because there a lot of stuff on the board to make it work. it sounds like a mic-ed acoustic. and, its stereo.... you can go mono out but with 2 amps you can really dial the individual tones. all the way between fabulous humbucker sounds to a really decent acoustic sound with infinite blending in between. these were American made in the Hamer factory. I keep thinking I should sell it

Fendereedo said:
This, but I'll never get rid of it. View attachment 988187
Click to expand...

Man! I’d play the paint off that puppy

Gardo said:
Why do you think that is ?
Click to expand...

The Baja is a really nice guitar, I just don't like the sound of it I guess. The Twisted Tele neck and Broadcaster bridge sound so blah at any and all height adjustments. I am thinking of putting in steel saddles and maybe a set of TexMex pickups to bring it to life.
Last edited: May 29, 2022

This Epiphone Sheraton. Plays and sounds beautifully. I just never play it. I think it’s the body size. I should just force myself to play nothing but this and see if I get used to it.