I've never posted much here, being a Strat guy more than a Tele player. But the Tech level on this forum just kills other guitar forums.

I have a partscaster I assembled and I really like it, but it had a harshness to it, like it almost sounded like an acoustic guitar through a clean amp, it had a ....something that just did not sound good.

I thought it might be this new fangled Warmoth modern neck, all roasted maple with the modern side adjust truss rod.

I thought it might be the Zexcoil pickups or possibly the EVO frets giving a zingy harshness. Maybe those Highwood saddles, or the 5 Raw Vintage rem springs? Could I have gone wrong with this floated 2 point trem? My other Strats have vintage style 6 screw trems....figure figure, change everything.

I tried various things, put on a HH pickguard that is knowingly much darker, that acoustic like twang and zing that was harsh and off beat harmonically was still there. Tried the 57/62's that I will never part with. Still there ....only more vintage sounding . I could EQ it out but it bugged me.

Then I read Ron Kirn's fret leveling thread, and coming from a Tool and Die background got out a couple of long, short medium dowel pins from my Gerstner tool chest and a straight edge. Straightened the neck and checked it. I used the 3/8'ths tool steel dowels as fret rockers, as they are straight and round to very tight tolerances. Found some overly proud frets in various places on the neck, like 6 of them. Not high all the way across, but high here or there, I actually thought the new Warmoth neck might be twisted!

Well, one full fret level and re-crown later it was none of the things I thought it was, it was the frets, 2 hours later I have a whole new guitar that now sounds like I wanted it to at the beginning. It plays different , it sounds different, bends very well and just sings out now. And now I have to change everything I know about amping it as I had it EQ'd too dark from the way it was sounding before.

Thank you Ron and all the TDPRI folks that go out of their way to help others, it is appreciated. I never would have figured it out, would have gotten a new neck, pickups, Bridge, saddles.... to get rid of the odd harmonic zing this neck had through an amp out of the box. Now? It was worth the $300 for the neck. And the 4 bucks of sandpaper and an offcut polished marble leveling beam I got at a stone shop for free once I talked to the guys there for a while. I did buy a FretGuru Dagger 2 crowning file, but my days of paying for a fret level and polish are over 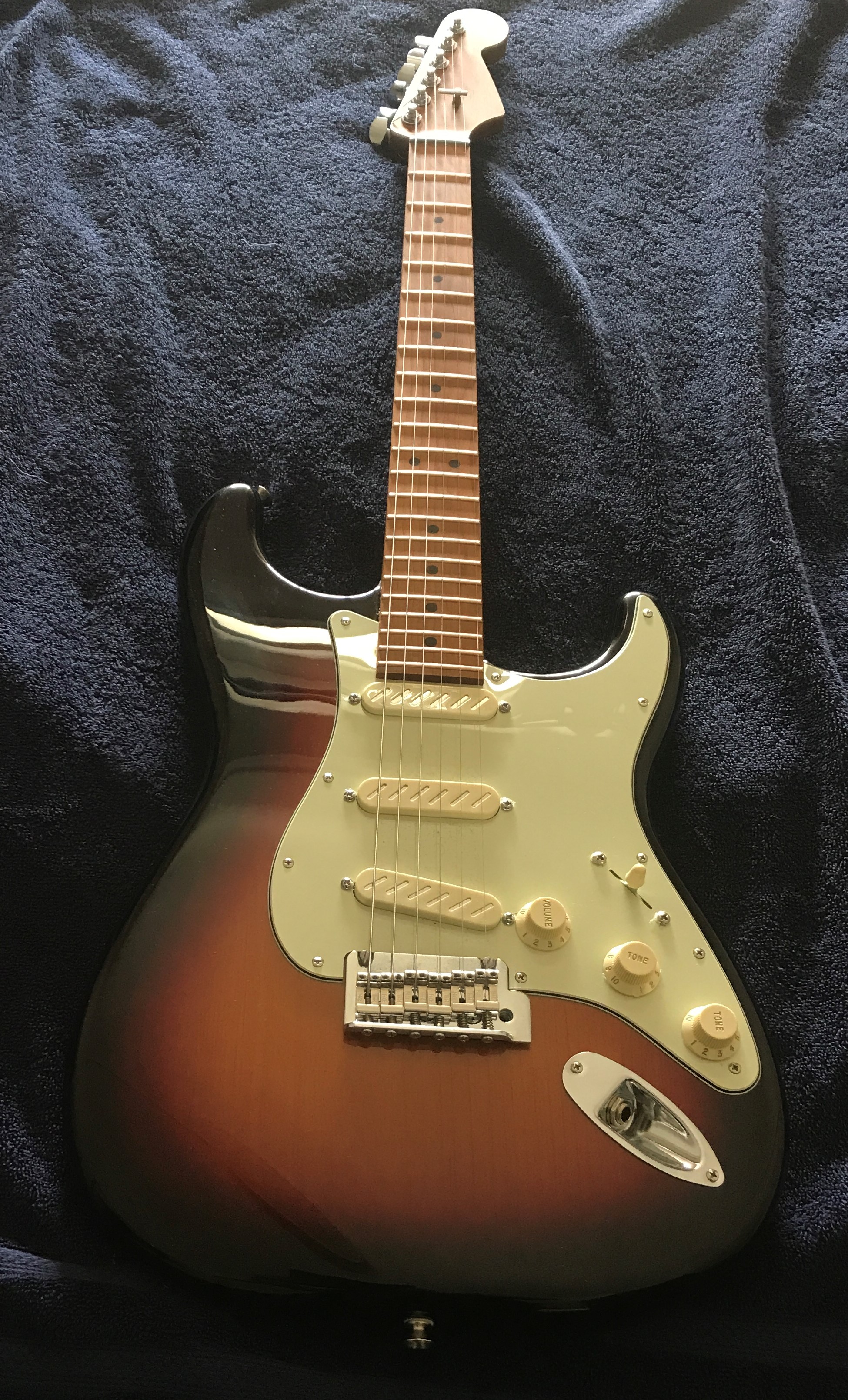 It’s great when something works out like that , especially when you are able to do the work and fix it , without taking it to a “pro” . Sorta makes u the pro. Congrats . Fine looking guitar

Greta to mnie, you figured it out and gained another skill. Well done!

As for Warmoth, they admit not doing fret leveling on their necks:
"Warmoth does not perform fret leveling. Most Warmoth necks are playable as they are received and do not require fret leveling. However, because wood moves with changes in temperature, humidity and string tension fret leveling may be required. This is best done after the neck has been strung up to pitch for several days and allowed to adjust in the assembled state. For this reason, Warmoth leaves this fine tuning to the end user." (https://warmoth.com/guitar-neck-fret-options)

I personally never had to dress any of their necks more than just rounding the fret ends, but definitely a thing to check for. Well done again!

That’s a sweet-looking guitar…so glad you were able to figure out your problem!

Fantastic! A great story with a great ending! @Ronkirn is an expert and has been generous with his knowledge over the years. His fret-leveling thread is a classic. So glad this worked out for you and that you gained this skill.

Senor Blues said:
I did buy a FretGuru Dagger 2 crowning file, but my days of paying for a fret level and polish are over
Click to expand...

I’m glad that it worked out for you!
What are your thoughts on the Fretguru Daggger 2.0? I’ve been looking at crowning files.

Senor Blues said:
and an offcut polished marble leveling beam I got at a stone shop for free once
Click to expand...

Awesome idea!!! Dang.... and I JUST saw a pile of this stuff at a junk yard! I may have to go back in pick a piece of this stuff up! LOL!! Congrats man! If were not for this site, I would've NEVER been able to build my 51 Nocaster and 54 Strat! I concur 100% that the knowledge base out here is AWESOME!

Gorgeous Strat and excellent work! I have a marble/slate counter shop just down the street - 5 mins walk. I've been meaning to drop by to see of they can sell me a beam cheap, as well.

smoothrecluse said:
I’m glad that it worked out for you!
What are your thoughts on the Fretguru Daggger 2.0? I’ve been looking at crowning files.
Click to expand...

I'm also curious about your experience with it. I have a cheap one from ebay and it's admittedly terrible. It's really the only thing I'm lacking so my last neck I just crowned slightly (really just curved off the top fret edges a bit) with small flat file and used fingerboard guards for good measure.

Thanks for the feedback everyone!

I am still not sure just how much pressure to exert on the file or the proper technique for doing it, to tell the truth, but it seems to have worked. with me very nervous I was going to gouge something, but I never did. The Fretguru Dagger 2 cuts to a VERY fine crown line. It is single cut file and very well made. I worked as a toolmaker, and this file a pro made tool. Its a file, not diamond encrusted like the zillion dollar Stew Mac one. it loads up tho, have a file card or brass wire brush handy to clean it.

Actually, I didn't tell the whole story, but a couple of weeks ago I bought a $30 Epiphone Les Paul Express kiddy guitar to practice on thinking it was just an expense to learn on before I touched my Strat. I levelled and crowned the nickel silver jumbo frets on that first, LAST weekend and did some fine tuning here and there. 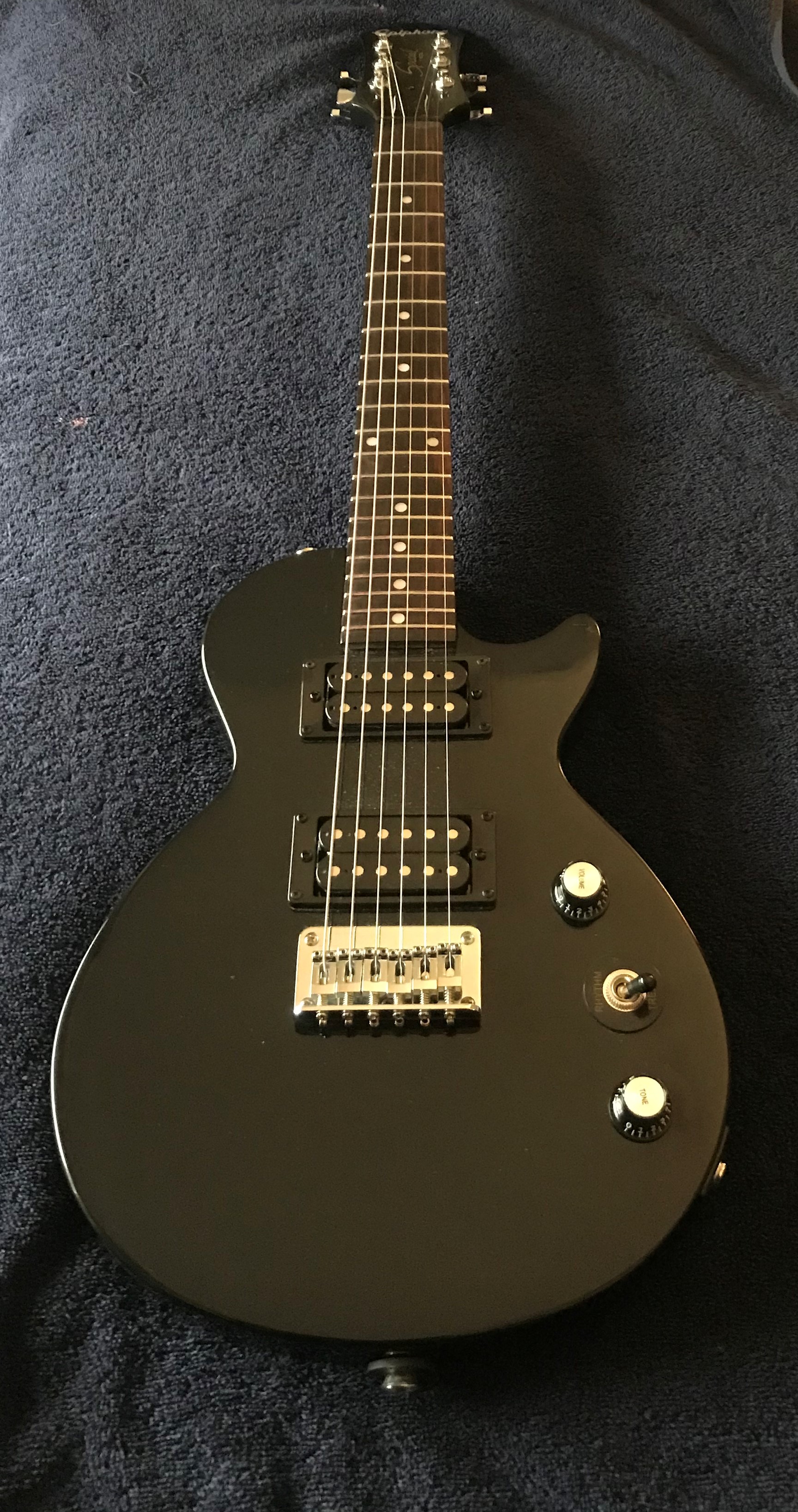 Now, that thing needed a bit of work, having been abused by some ten year old or something and ending up in a Pawn Shop not far from me. I practiced on that, the frets are softer and so cut faster than the EVO frets on the strat. I put some Hipshot locking tuners on it, that I had in a box, and a 6 dollar bone nut I got from Amazon that needed NO work.
.
Its now a ripping little Les Paul with hot humbuckers that is so easy to play with a very low action its ridiculous. Was not like that when I got it! Through a 50 watt Plexi you are hard pressed to know its not a regular Les Paul sound wise. But its like 5 and half pounds

That thing through headphones and this little Nembrini Bogner xtasy I bought yesterday for my iPad for 10 bucks is headphone practice heaven.

Edit: The Fretguru file needed no fingerboard protectors, it’s all rounded off at the bottom and hard to make a mistake while using it.
Last edited: Aug 31, 2021
A

Wait, are you saying it actually sounded different after the fret work? That's wild. I've never heard of that or experienced it.

Great to do your own fret work, though. Last year I got a crowning file and recently picked up some polish and polishing techniques. Takes some muscle but definitely they play better after the polishing!

It factually does sound different. When I fret leveled it the way the marker wore off showed me the strings were hitting frets higher up the neck--not enough to buzz out completely but enough to be hard to describe and introducing off key harmonics--sort of like pinch harmonics. You know how an acoustic sounds? Its got much more going on than just the string itself vibrating. So by leveling the frets all that nasty overtone from the high fret interference went away! I was impressed.

To the Doctor of Telocity: I have owned and played in house and out in dives with Kinmans (Blues, Woodstocks) Vintage Noiseless, Fender Hot Noiseless, Lace Hot golds, Lace Golds, Lace Holy Grails, Areas, Duncan noiseless, EMG's. The Zexcoils feel and sound like single coils. The others killed the hum, yes, but they lacked some high end and harmonic content that the Zexcoils and real single coils do have. I have 57/62's, Fat 50's , my favorite strat neck pickup is a CS69. I've had Fralins and Bare Knuckles and a set that came out of a Rory G strat and and had an Eric Johnson strat that I lloved the pups in, but hated how it played.

But I got tired of standing at 45 degree angle to some beer sign or coke machine, and the noiseless did that job. In a loud mix next to a drunk drummer, who cares? But I still lacked that top end and missed it. I like EMG DG20 set but they are compressed and a unique sound all their own.Totally noise free tho.

I got the Zexcoil Convertible set, where the Neck and Bridge have push pull pots --pull for single coil and in for 'humbucker' tones. Both settings are totally noiseless. My Plexi picks up radio stations on its own and has more noise than the Zexcoils. The neck Pup and middle and in betweens I can dial in what were my favorite pups ever that stupidly sold the guitar...it was a 96 or so Cunetto relic that had CS pups that were dark and smokey by not hot, you could still get sparkle out of em. Hard to describe. But I duplicated that tone with knob tweaking. The Zexoils come with No Load tone master, and a blender to blend in Neck to Bridge or Bridge to neck and on 2 and 4 too. The tone control is good and usable all the way down to 2, unlike your usual tone pot. When I figured out how to dial in that dark smokey CS pickup tone, I was up until 3 AM playing that night

The Convertibles in humbucker mode are more like HOT P90's and I can get my start to resemble a Les Paul Juniorish Bridge tone. Were I to do it again, I would put a real humbucker (SD Alnico II ) n the Bridge position, as I have discovered I like that in a Strat or I would get a Zexcoil full size humbucker for the Bridge. I might still do that. Lots of vids on the Conbertible zexcoils on the youtube.
You must log in or register to reply here.
Share:
Reddit Pinterest Tumblr WhatsApp Email Share Link