mtown said:
Just like you said about the speed bump effect. If I played only Jumbo frets I might be able to get used to them but switching back and forth from other guitars screws me up with my touch and technique. Quite honestly I don’t understand Fender’s reasoning in only offering these type of frets. Do the the majority of players prefer them?
Click to expand...

I despise "Narrow Tall" frets. Why? Because they are too narrow and too tall for me! I know a lot of you guys love them and I wish I did, too, since so many guitars seem to have 'em nowadays. I've passed on many guitars that I wanted to get simply because they had "Narrow Tall" frets. I can't stand them. For some reason Wildwood seems to love them because 99% of all of their Fender Custom Shops come with them.

Medium Jumbos are the perfect fret for me, and perhaps "Medium Vintage", too.

The narrow tall are virtually medium jumbos with more vertical meat. The reason the makers like them so much is the time between refret is longer.

I love narrow tall as much as medium jumbos. I cant get on jumbo frets but I can get used to it given no choice. Its no biggie.

I find myself going sharp a bit with the narrow tall, but its just more on me being used to vintage frets, which i love the best.

The best combo I ever had is a 7.25 radius board with 6105/narrow tall frets. That was amazing to play.

I like the narrow/tall frets as you can get a few dressings out of them. At first, they seem a little high, but once level, you can get used to them pretty easily.
2

I absolutely hate Jumbo’s but do OK with tall-narrow. That’s said, not all tall/narrow are equal. The tall/narrow that was on my Nashville MIM Tele were a good bit narrower that the tall/narrow on my Am Pro II. I prefer medium jumbo in stainless, which feel less jumbo that nickel counterparts. I wish fender offered more vintage style frets on necks with the truss Rod on the right end!

I’ve only kept one of my American Professional guitars. I’ve kept that guitar for now, because I love the unique looking Sonic Grey color, the very dark rosewood neck, and I have not yet found another Telecaster (in a similar price range) that I liked better.

Now that I play with a light touch, I'm OK with most frets and I sort of like different feels on different guitars. That being said, tall narrow frets are low on my list. Medium jumbos, if crowned correctly, play plenty clean enough and feel much better. I suspect that the reason Fender is using the tall narrow frets is probably something to do with installation and robotic crowning rather than playability.

I played my whole life with the medium jumbos on my '88 Am Std Tele, so that's what feels like home. A few years ago when I got back into playing, I bought a Deluxe Roadhouse Strat. I was ignorant enough about specs to not even know what was different about it, but bends were like butter on it. Not that bends were difficult on my Tele, but on the Strat they were effortless.*

So Narrow Talls are okay with me. They're a little "speed bumpy" on slides, and yes, easier to fret out of tune. But I can switch between guitars easily now. Medium Jumbos will always feel like home to me though. I ended up buying a '99 Am Std Strat just so I could have a Strat with the same specs as my Tele, and they're the two most comfortable guitars I own.

I like narrow talls with a 7.25 radius. IMO, Fender nailed it on the early Road Worn teles. Try heavier strings for smoother slides. 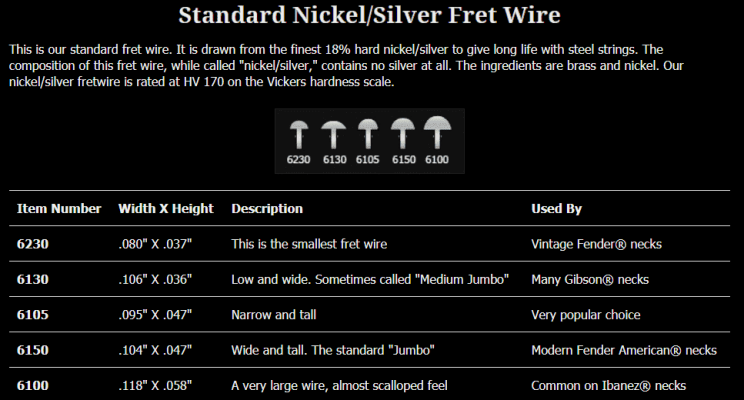 BGTele said:
PS, I remember the days when I could only afford cheap hard to play guitars. I think each of us, given time, can get used to anything if we have to.
Click to expand...

Isn't it funny how that works? My first guitar, which was my only guitar for the first 10 years I played had a skinny, flat neck with big frets. I played the crap out of it and never even thought about how the neck played or felt. But earlier this year I pulled it out from under the bed and used it at band practice. I hated it and had to switch back to one of my other guitars after two songs. I probably could get use to it if I had to, but I don't want to.
Z

I guess some of us adapt easier than others . Back in the late '70s I had my two main guitars refretted from vintage wire to jumbo wire , I believe it was 6110 . Made bends on the 7.25 radius more enjoyable ! Now I have a variety of frets on various guitars including those mentioned above . To me , no two guitars feel exactly the same anyhow , so there is always a period of adjustment . I will say I can play vintage frets , but they are the least desirable to me .

I swear the chart I was looking at today had narrow and tall at .55 high.

FortyEight said:
I swear the chart I was looking at today had narrow and tall at .55 high.
Click to expand...

FortyEight said:
I swear the chart I was looking at today had narrow and tall at .55 high.
Click to expand...

Much too tall for me. I pull notes too sharp when chording with this fret wire within the first 5 frets because unless you have an ultra-light touch, it's very easy to push down too much to go sharp. Also, when sliding notes, I get the "speed bump" effect. It sounds like duh-duh-duh-duh-duh-duh as my fingers slides up and down.

A trip to guitar store will let you test both styles

mtown said:
Can someone please give their perspective on the new American Professional Tele’s with the tall narrow frets compared to the medium jumbo? I’ve played Tele’s with jumbos and don’t like them. Can I expect the same with the tall narrow frets? I haven’t had a chance to play any of the newer Tele’s to see for myself. Thanks
Click to expand...

I love the tall narrow frets on my Tele and it's the main reason why I have an American Pro II.
I never liked the feel of the the medium jumbos that were on most Fenders primarily because I didn't feel like I could bend well with them. Vintage talls solved that problem however. I also have big hands which is another reason why they work for me.

Fenderdad1950 said:
A trip to guitar store will let you test both styles
Click to expand...

One thing Id like to piggy back on this statement. Ive played a crap ton of guitars in the last few days. A LOT of new fenders, squiers, a few epiphones. a bunch of used stuff of same brands and a few other oddballs. All the classic vibe new on the shelf and even Fenders to a degree are annoying to test. they put on 9s on everything and i play 11s. I knew i would struggle with trying these out but i was like playing like as light as a butterfly in my mind and most of the classic vibes go sharp if a butterfly flew by. vinteras have vintage and its a bit better. but 9s??? man.

despite all that i picked up a used cv duo sonic and it has the narrow tall on it. it had 10s on it in MGR and was almost good enough for me. then when i put 11s on its completely fine. the only place i gotta be careful is an open a.l chord. and i can manage that, well just practicing.

playing 9s ESPECIALLY on a Jaguar or shorter scale, i dont know how anyone plays that. especially with taller frets. a baby would make it go sharp by drooling on it. now if some of you do play shorter scale with narrow tall and 9s, i get that were all different. and that is super cool. i just cant fathom how light a touch someone would need.

epiphone puts 10s and they are medium jumbo. i liked those very much. mmmmmm riviera with mini humbuckers. oooooh yeah.
You must log in or register to reply here.