We played at the Takoma Park Porch Festival on Saturday. The town is full of beautiful Craftsman bungalows with great big front porches, and this event turns several of them into stages. It's really cool. The last time we played for this thing we worked up an acoustic set, which was more in keeping with the overall homey folksy vibe. But this year our host apparently wanted his house to be where the rock & roll happened. We and the other two bands kept our volume down but otherwise did our typical stuff, and it was a hell of a lot of fun.

Yesterday we played at a typical bavarian beer garden. I was curious if southern rock matches to bavarian tradition - but it did very well!

It was hot yesterday, up to 90 degrees with a lot of humidity. Luckywise we got a shady place to play. We had our own equipment (pa, lights) with us so we sounded our best. 3 hours playing, good food and beer and good tips - was definitely a good one

Mighty hot day, we had a tent over the stage along with a nice breeze, which helped immensely. Great venue, good tips, we each take a bottle of wine home, paid well, got compliments, what's not to like! Even had a tdpri member(@scook) show up.

All in all a nice way to unwind after a tough week.

Well... what can I say about this weekend except that it wasn't much fun.

Friday night was the duo (girl singer and me) at the most exclusive country club in the county. The setting was nice, but it was a rather large area, so the 30-40 people that were there were pretty spread out, and they all seemed kind of far away, and the load-in was a PIA. Out of those 30-40 people there were only 4 that really enjoyed our music... or, at least, actually listened and showed some appreciation. Those 4 people (2 couples that were new to the gated community of million dollar homes) came up and talked to us as we were about to take a break and were very kind. The rest of the people either didn't pay attention to us or, if they did, seemed confused regarding how to act. The club members were also cheap - only one guy threw a $20 bill into the tip jar. At the end of the night we were both ready to not book anymore gigs there (this was our 2nd gig at this club and have one more in June), but last night she said it was worth playing there because some side connections could lead to some private parties, etc. That may be true, but what I know for sure is that these aren't my kind of people, and I'm not so sure that "I" want to play for them anymore.

Saturday night was a private event (a wedding) at an (in the words of the girl singer) adorable winery in a quaint little town. The owner (or manager) of this place was a total douche, but the newlyweds, their families, and guest were all super nice. They added us to the guest roster so we could eat and drink with everyone else. We decided to play as a trio, and this is the real story. For trio work we normally use either the other guitarist/vocalist or our bass player. Neither of them was available, so we (somewhat reluctantly) used the keyboardist that has played 3 gigs with the band. He played about as well as could be expected with the band (learning 45-50 songs on short notice and only rehearsing a few times), and I worked with him quite a few times over the last 25 years and knew that he had his shortcomings. But those shortcomings were - if I may use an overused cliche here - on steroids last night. He was absolutely awful in the first set. Although he managed to redeem himself on a few songs in the 2nd set, in general he got a D- for the night. He has played okay with the band, but that's because he was sufficiently hidden in the mix. In a trio he was out in the open on full display. The good news is that no one was paying attention to us as he butchered the songs, and even if they were listening no one would noticed any mistakes.

Time to forget about a couple of crappy gigs and move on to the next 60+ gigs coming up.

I had two very pleasant gigs with Nathan this weekend.
Friday we played an early trio gig at Hound Song Brewery in Columbus.
Nathan’s friends and family showed up in force, and we sounded our best!
Saturday we played a huge old dance hall/community center in Nordheim.
Guest fiddler RJ played beautifully, and we had the crowd dancing the entire evening.
It was extremely hot, in and out of the venue.
We sounded our best, regardless.
After we loaded out a huge and fairly violent thunderstorm erupted.
I actually turned back and waited it out for an hour.
I couldn’t see the road in front of me!
I got home at 5AM.
Other than the weather drama, it as a great weekend!

skerwo said:
Yesterday we played at a typical bavarian beer garden. I was curious if southern rock matches to bavarian tradition - but it did very well!

It was hot yesterday, up to 90 degrees with a lot of humidity. Luckywise we got a shady place to play. We had our own equipment (pa, lights) with us so we sounded our best. 3 hours playing, good food and beer and good tips - was definitely a good one
Click to expand... 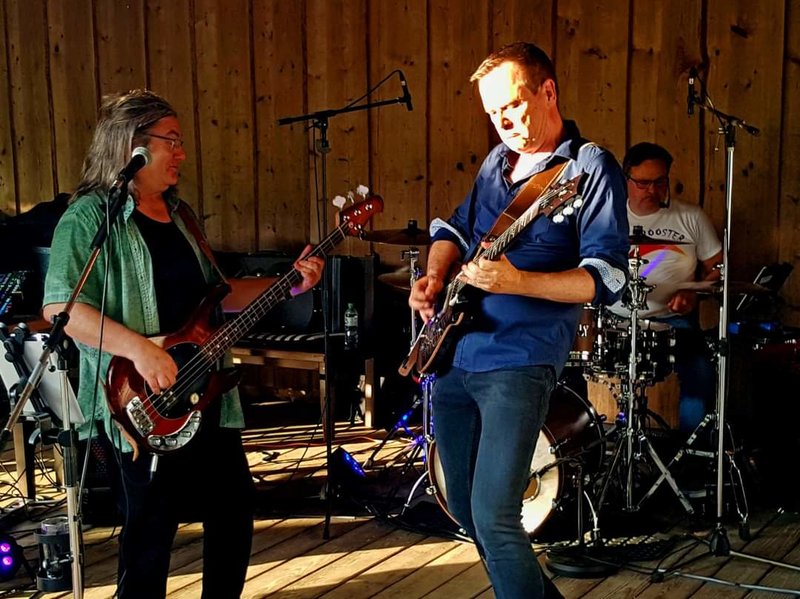 Had three gigs this past week, my regular Thursday and Saturday gigs at Eddie V’s and the monthly Jazz Monsters Big Band thing started back up yesterday at Chef Point In Watauga Tx. Great weather for it, band sounded pretty good (it’s pretty much a reading band, no rehearsals). Got some good comped food to boot. Played my Epi Zephyr Regent through a HR Deluxe. Fought the feedback a little but managed ok (the age old struggle is real lol). Here’s a video someone posted of a tune…hopefully this link will work.

Just finished a lunch time gig at a sandwich shop near Ft. Collins. Maybe 30-40 people coming and going. Duo with another songwriter; bass player had already booked another gig. All originals, except one cover by request.

I played a Gibson flattop and my MIM tele through a small pedal board into SF Princeton (no-verb).

First real gig in 7,8 months? Felt great! The other guy is a fine writer, guitarist and harmonica player.

It was good to shake off some rust.

My gig with Nathan at the Lone Star Bar in Pflugerville went well!
The crowd was small, but attentive and generous.
We sounded our best.
Another good one!

Ok, that was fun. Very friendly crowd, very pleasant outdoor setting, and had all the attributes of a first gig with new band. Couple really good songs and (not gonna lie) couple of rough spots, and I had a few of both.

All in all, the vocals were good and the classic covers we did were fine. Just need to play more. Thinking back, before this week, I’ve done all of 3 gigs in 3 years - and it felt like it. But good experience! My last gig was tonight, a fundraiser for a private school in Southlake Texas. A country band I play with sometimes has done this gig for probably 15+ years (I think, I’ve only done the last 9 or 10). Good gig, good pay, and great BBQ, always a plus. The female singer couldn’t make this one so the bass player and I sang a few to help take the load off of the male singer a little bit (usually I just play guitar for these guys). Worked out pretty good. We had a new to me fiddler with us tonight, Sharla, and she did a great job. Glad to add her to the “roladex” (yeah I’m old). Long gig but the weather was nice for it (outside gig). Played my blonde partscaster Tele and Gretsch Tele through the BF Deluxe.

Great fun playing yesterday, I've played with these guys for years, it's like putting on your favorite sneakers

Broke a string on the blue Tele, on next to last song when I put the guitar behind my head while playing "These Boots Are Made for Walking" Ahh, such is the fate of jazzer fronting a hillbilly boogie band

Kellys Island yesterday with Knucklehead. Named after the motor, not the idiot. Had a great time yesterday, bass player said we were on fire~it sure was hot enough. We've been working as a trio, since our drummer went back to school, it sure was fun having him on board yesterday

Crowd was engaged, tips were good and we had a blast, Kat's singing was superb.
Setting up Sounds hot everywhere. Get used to it. In ten years we’ll be reminiscing at how cool the weather was in the early 20s.

Jakedog said:
Kellys Island yesterday with Knucklehead. Named after the motor, not the idiot.

Wow, your bass player is a "low wearer", holy mackerels! I would think that would be tough on the left wrist.

Fret Wilkes said:
Wow, your bass player is a "low wearer", holy mackerels! I would think that would be tough on the left wrist.

Nobody knows how he does that. And continues to do it. Dude is 61 years old, and has been wearing his bass like that for almost 50 years. My back hurts just looking at him.

Old punks. What’re ya gonna do?

Fret Wilkes said:
Wow, your bass player is a "low wearer", holy mackerels! I would think that would be tough on the left wrist.

Jakedog said:
Nobody knows how he does that. And continues to do it. Dude is 61 years old, and has been wearing his bass like that for almost 50 years. My back hurts just looking at him.

Old punks. What’re ya gonna do?
Click to expand...

my dad did as well, not that low though. he started playing on upright and moved to electric. used the side edge of his index finger. Not so evident in this photo We did Friday & Saturday at the Golden Nugget Tavern in Berlin, NJ.
It was excellent. So much fun. Dance floor was full all night, both nights.
3 weeks before I get to do it again seems like an eternity. bluesguy62 said:
My last live gig was on Nov 7, 2020. Just guitar, sax and keyboards. We were asked to provide instrumentals in between presentations for the launching of a new housing project. Played on and off from morning till evening, it wasn't too bad. In the YouTube video below, you can sometimes see my right foot and the headstock of my Robert Cray Strat.

This is an edit of the post above. I've since gotten hold of a full-sized video of the event and uploaded it to YouTube:

Anybody here running a Berringer Digital board at Church with the matching in ear system? Have a weird issue with the system at Church.

Georgia (our dog) has passed on
2