Got this yesterday in the mail from GC. Suhr Classic T, not sure of the year. Pretty sure tuners have been replaced, I think all else is original.

I kind of have a different take from a lot of Suhr reviews I've seen around here. Most claim it's too perfect or too precise, lacks the vibe and character of a Fender Tele.

When I started playing this, I immediately thought, "yeah, it's a good Tele." I mean, a Tele is a Tele is a Tele (or t-style, whatever). It's a simple beast. Yeah, this one has comfort contours, and the build is really great, those are plusses. It's a nice T-style.

I guess I'm kind of underwhelmed. I got it because trying a Suhr Modern left such an impression on me, which was the best playing guitar I've ever played. Like it doesn't get better than that, at least in my experience.

But, this is...just a Tele (t-style, yeah yeah yeah). A really good one, but is it way better than a bunch of American Fenders I've tried? Or Nash, or other T-styles? Not by much. It does the thing. It's comfortable, that's cool.

Frankly, I was struck by how close it was to the Vintage brand Tele I had a bit ago. That was a good Tele, too, albeit for $1500 less.

I'll probably keep it. I'm not in love with the pickups. But it's a good build, and I'm also just kind of getting to the point of being sick of cycling through guitars.

Some of my favorite guitarists view their instruments as tools of the trade…nothing more. Wayne Krantz played a Strat for years that he said was a total dog, lol. Recently, Suhr gave him a guitar and when asked about it, he basically said, “I don’t know much about guitars. It’s a good instrument. It stays in tune.”

Sounds about right. They are really good guitars. They are not magic, but nothing is.

Let the expectations of the "bestest, most amazingest guitar ever" subside. Then you will have a great guitar.

Been there, Mojo is an elusive and very personal thing, I don't even really blame the guitars themselves if I perceive one to be sterile.

I think part of this eqation with preferring the Modern greatly over the T style is that the modern was pretty much made for Guthrie Govan and to a lot of his specs. He pretty much started thw whole roasted maple neck thing, as he was playing gigs all over the world at the time, and needed the most stable tuning you can imagine, jumping from one corner of the globe to the other. All kinds of differing temps, humidities.

I played a Suhr Tele in a music store and it really wasn't all that. Like you said, it was great, tuned well, not in love with the pups, but still a great tele. When after telling him that,he said the $4000.00 price was negotiable. I put $1400.00 into the tele in my avatar and it was a better instrument. Granted, I spent several years getting to know the Fender and just an hour or so on the Suhr, so who knows.

Oh, and Jon Suhr will be the first to admit, that you can everything right and make everything spec. perfect, and some will still be dogs. Which is why I always insist on playing any instrument before buying!

Some of my favorite guitarists view their instruments as tools of the trade…nothing more. Wayne Krantz played a Strat for years that he said was a total dog, lol. Recently, Suhr gave him a guitar and when asked about it, he basically said, “I don’t know much about guitars. It’s a good instrument. It stays in tune.”
Click to expand...

Wayne Krantz is a beast of a player.

I have followed him since the 80’s.
I

mikeRI said:
Some of my favorite guitarists view their instruments as tools of the trade…nothing more. Wayne Krantz played a Strat for years that he said was a total dog, lol. Recently, Suhr gave him a guitar and when asked about it, he basically said, “I don’t know much about guitars. It’s a good instrument. It stays in tune.”
Click to expand...

I'm kind of the same way. I have some nice guitars and yeah, I spend time on here and other forums reading about guitars and gear, etc. But I don't obsess over build methods, vintage-correctness, etc. There's actually a multiple page thread on TGP right now where people are complaining about the crappy quality control that results in the corners of stamped Tele bridges not being smooth. Really?

I get a lot more excitement and reward out of learning to play something new than I do out of seeking some Unobtaniumcaster with a fancy top that took three years on a custom build wait list and then posting pictures of it on a postal scale. To each their own though, and I guess we all enjoy this hobby in different ways.

Think about some of the most iconic guitarists and the instruments they play (just picking a few off the top of my head) - SRV, Van Halen, Brent Mason, Jeff Beck, etc. (there are many more in your genre of choice, probably). All of those guys played the snot out of mainly one guitar they bought or made, or something relatively off-the-shelf, and they used it as a tool to make music. And Wayne Krantz is also a great example - that's a three bolt 70's Strat he plays, considered to a "bad" era. There's an absolutely amazing jazz player in NYC named Nir Felder. He still plays the 90s MIM Strat his mom bought him when he was in high school. It's a tool to make music.

But if you're not crazy about the pickups then changing them could be the key. I have a guitar that went from gathering dust to my no.1 with a pickup change.

It was always a great player, but the pickups were bland. Now it has the whole package.

I've got a bunch of T-style guitars. Some are really nice ones I put together myself. The two Suhr T's I have owned for a long time are easily among my favorite guitars. The wear on the 2006 black one is genuine, from 16 years of sweaty and mostly outdoor gigs bars along the gulf coast of Alabama and Florida. 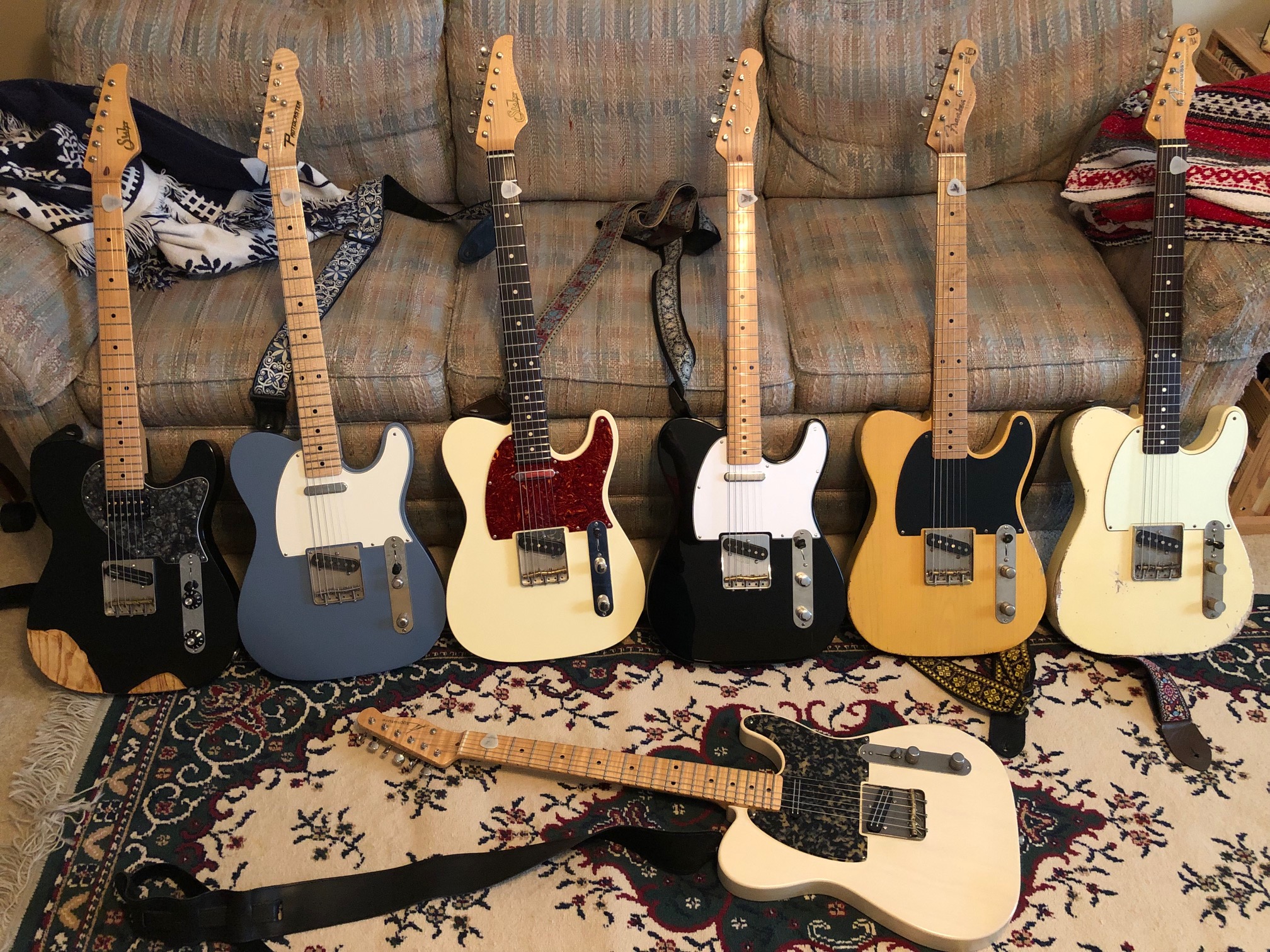 Alex_C said:
Sounds about right. They are really good guitars. They are not magic, but nothing is.
Click to expand...

What you produce with them can be...

A tele is a pretty basic instrument. It's pretty difficult for one good one to stand out among other good ones. Aside from variables like neck profile, everything else comes down to the setup. If that inexpensive Vintage brand had a good setup, there's not really a whole lot that can make the Suhr feel better. The Wilkinson pickups in the Vintage are quite good pickups too.

I always had inexpensive guitars and got very good at setting them up and making them play great. In recent years I started to splurge on some much nicer stuff, and although I like them, for the most part, none of them do anything that my well set up cheap stuff doesn't do. When I thin the herd, some of my sub-$200 guitars will make the cut and plenty of my US-made guitars won't.
Last edited: Dec 3, 2022

I think the comments about expectations are right on the money.

I, myself cannot do a great review on a guitar until I have it set up, dialed in how I like it...intonated, 11-48...pickup height tinkering...maybe for weeks.. Probably 2 string changes.. (about a month if I am playing it daily). This is all provided its built right.

At that point I can begin to understand how to setup my amp, pedals etc to get the best out of the guitar.

Then I begin a brutally honest appraisal of the guitar and whether its a keeper or a discard.

Just sayin. Maybe give it some time, get to know each other. See if you feel this way in January.

I’ve had a Suhr T style guitar since 2007. Built to my specs - Madagascar Rosewood board, SS frets, locking tuners, humbuckers. Buzz Feiten tuning was included back then. The fit and finish were and remain fantastic. The action is low and perfect for me. I think a poly finish was about all we could order back then, not sure. I did change the neck pickup a few years ago to a Lollar Imperial which improved the tone to my ears. And back in 2007 - this was $2200 built to spec. I still think Suhr builds excellent instruments. I’m guessing the prices are comparable to the Fender Custom shop.

I heard it as "Your frustrations are equal to your expectations." Either way, it sure is true!
Click to expand...

naveed211 said:
I'll probably keep it. I'm not in love with the pickups. But it's a good build, and I'm also just kind of getting to the point of being sick of cycling through guitars.
Click to expand...

Good idea. Those Suhr guitars have a reputation for quality. It may be the last guitar you need to buy for the rest of your life.

BrazHog said:
Good idea. Those Suhr guitars have a reputation for quality. It may be the last guitar you need to buy for the rest of your life.
Click to expand...

Eh, I got rid of it and got a Kotzen Tele, which I was immediately much happier with.

I was disappointed with the last US Fender (Strat) Sig model I had at $1700. My 90's Korean Tele copy had an outstanding neck and with everything swapped out and it fulfills my traditional tele itch. I think the modern and Pete Thorn type guitars are a better place to throw money at.
You must log in or register to reply here.