Humans in modified golf carts on the main roads.... what could possibly go wrong???

Whenever we have big festivals in the area, the crews are assigned golf carts to get around. A few years ago at one I was mixing they ran short, and my audio crew was passed over. I decided I deserved one as much as lighting and stagehands so I provided my own. 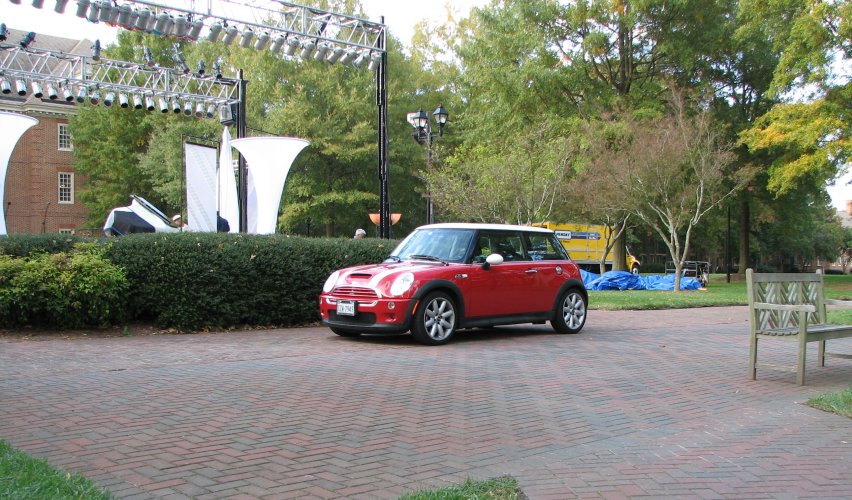 It worked great, The venue was not pleased.

daddyplaysbass said:
Be careful walking in Peachtree City, GA - they have the right of way over EVERYTHING - and take it
Click to expand...

But don’t half of them work in the lighting industry? They’re gonna be drunk. That’s the problem.

Dan R said:
Golf carts are street legal in downtown Charleston and some beach communities. You see them quite often year round. A word of caution, people normally drive these things way too fast. There is little to no protection in a golf cart. With most automobiles, you have a shell of steel and safety features for a bit of protection.

If you ride in the front seat of a golf cart you're generally OK but if you ride in the back, hold on for dear life. These things don't normally have seatbelts. Virtually every time I've ridden in the back seat (which faces rear) I have had to grasp a rail tightly to keep from flying off the back into the street. This is a public safety announcement brought to you by Dan R.
Click to expand...

IMO, they are a safety hazard and a nuisance. They speed around the neighborhoods , often without regard to traffic signs, rules/regulations. They expect car drivers to defer to their presence. Many times, the people riding/driving are partying rather than paying attention. And you are correct that seatbelts are often not uses, if even present. Are they insured, even for liability ? Who knows ....?

Telekarster said:
Humans in modified golf carts on the main roads.... what could possibly go wrong???
Click to expand...

My brother-in-law as I've mentioned before is the Patriarch of his clan out at his ranchette. He bought 9.5 acres out there and has mucho family living around him. He can buy stuff cheaper than anyone I've ever seen and sell it for more than seems possible. He's bought several carts for the family to run around over the property and has one special cart for him. He had it "chipped." I have no idea what that entails, but that thing will run a hole in the wind! I hang on for dear life when he takes me on a tour.

Yeah. We have them in our "active adult" community. Y'know, so you can ride to the pool and the pickleball courts. SMDH.

I see some here and more in other communities.
To be honest, annoying? Yes, often. Dangerous? Yeah, pretty much.

But compared to the daredevil crap show I see every day in traffic in my semi rural area?
Low hanging fruit.

Many here have long ago come to the conclusion that "non-persuit" policies equal "we can do whatever we want, no one is going to do anything about it."

Off road/unregistered/uninsured vehicle? No problem cruising right into town right up the middle of an interstate road in groups during peak traffic bullying their way through traffic.
Change two lanes and cut you off? Not a thought given. Split lanes, pass on the shoulder? Go ahead!

A week ago friday night I had yet another encounter with madness.
Young person on a motorcycle on the main state road, pulling that crap where they feel entitled to stop, position themself in an intimidating way as to stop traffic and put on their little suicidal crap show, standing on the seat, riding wheelies through traffic, etc. In the middle of peak traffic commute time.

As a commuter I am annoyed.
As a motorcyclist I am insulted by perceived association.
And it is but one of many similar instances experienced personally lately.
Cars, motorcycles, people who just clearly dont care any more.

I counted eight times in about 1.5 miles.
I took note of no tags, no turn signals, no mirrrors, all required equipment in my state. Some kind of aftermarket "barely there" example of a brake light that was also not legal.
And this was no little scooter or moped by any stretch.

I saw a chance to give the clown a wide berth and get around. I wanted to just go home.
If I wanted to see a show I would buy circus tickets.

But no, my mistake.
This triggered mr. Road rage into chasing, harrasing, verbally assaulting me, physically assaulting my vehicle and generally terrorising me as I chose to head my way back toward town, here I hoped to pull into the local police station and hopefully send the hint to move on. (What am I going to do, lead him to my house?)
Within two blocks of the police station I became pretty certain I would be forced to choose between two last chance decisions that I wished to avoid.
One was to be forced to confront him. Which I am prepared to do but wish to avoid at most any cost.
The next is hard to imagine, but I was there.

Police did intervene at the last moment.
But of course, just checked to see if I was OK while letting Bozo escape.
Turns out there were reports on the guy all over the police scanner.
They do nothing. Non-persuit policy and all you know.
I tried to at least offer my personal contact info in case against all odds something resulted in the police wanting my input.
They acted like I was bothering them by offering a mere phone number.

Traffic citations here beyond speed cameras or the occasional radar trap have become nearly non-existent. And the driving experience is showing the result.

I wish I knew where to go where it wasnt just as bad or worse. And I dont know the answer.

Annoying golf carts?
Eh, small fry here. They are everywhere and no one is going to do anything about it.

Oh wait. i am wrong about that. Many hours and dollars might be spent on new legislation that is redundant, as just like the current.... Un-ininforced and useless.

The urge to go vigilante remains suppressed, but it takes effort some days.

Legal in some towns in AZ. Sun City, designed around a golf course as a retirement community, comes to mind.

You see them in other towns too, where I think they lack legal status, but people seem to get away with it. Never saw the cops with one pulled over.

There are several towns in states south of me where they are legal on secondary roads.
Some have minimum age requirements. Some require a special registration. Some have minimal lighting requirements if out after dark.
One area I was in recently limited them to what should be "hiker/biker" paths.
The traffic to and from the beer store seems pretty frantic.

It is what it is. I just want to be reasonable safe on my five speed beach cruiser bicycle.
And turn down your tunes please.

Golf carts should stay on a golf course, not on a public road. I live way out in the country, and golf carts are up and down the road all day here. It's a nuisance, if you can't afford insurance on a street legal vehicle, please keep your ass at home. This has been a pet peeve of mine for years.
You must log in or register to reply here.
Share:
Reddit Pinterest Tumblr WhatsApp Email Share Link