Stage volume, sound techs, and you

David Barnett said:
It's the same thing if the club has a DJ that plays between band sets. People will complain all the way through your set that it's too loud, then as soon as the DJ starts it's twice as loud as the band, and no one minds. Go figure.
Click to expand...

That DJ is playing a highly produced professional recording which is EQ’d and compressed, no peaks or variations.

Still hurts my ears and gives me effiing brain damage.

Yeah the duty cycle is way different from live musicians. Mostly it has the dynamic range of a pink noise generator...

Still the average level is often higher than the peak levels the live band was hitting. Yet people who were complaining about the band being too loud are fine with the ear-splitting DJ.

Probably the majority of music consumers today are so used to earbud music with no dynamic range that they have no point of reverence to see the good in wide dynamic range live music or classic recordings mixed with less compression.

Of course if the live mix is bad too then the advantage is only theoretical. And likewise a good live mix of a mediocre band.

Thus music consumers chances of preferring earbud style product are higher, unless they are in the minority that is hip to great live music.
Hell live mixes have commonly sucked since vinyl was the standard for consumers to buy music and listen at home.
Depending on the venues and bands of course.
Its not like there was any particular perfect good old days, unless we mean back when we were still immortal in our youth...

I don't think there's enough specialization among the sound operators the venues use. Different music styles and performers have completely different requirements yet venue owners rely on one, maybe two people who have their own built-in prejudices about the way things should sound.

Most that I've encountered have never worked in a recording studio where a producer is in charge of the end product and oversees everything.

Skyhook said:
Sure there is! 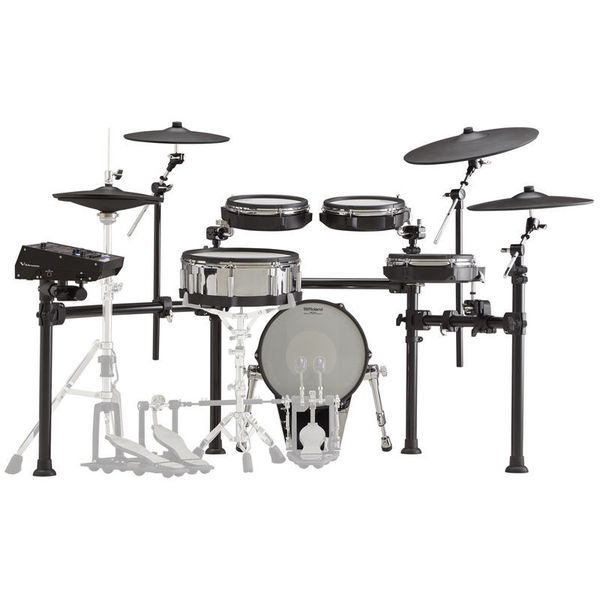 If the pianist can play on this ...

... without a lot of butthurt ego, then you can play on that kit!

Yeah, and you can get with "Satin Sally" instead of an actual woman but that ain't gonna happen either, hoss.

Not always. That’s making a lot of assumptions about what they’re spinning.

Nothing beats a good conversation with the sound person when starting set up. Decent ones should know what works in their room and appreciate that musician's need to hear themselves and each other. These three you mention sound clueless.

But also, it's not clear what amp positioning you're using? If the amp is five feet behind you and flat on the stage pointing into the house, then if you turn up so you can hear it you are causing problems unless at a venue that wants a loud band. (Ankles and knees don't have ears, and amps are directional and can be harsh.) However, if it's angled back and pointing at your head or at least across the stage then there sound be few problems out front. Putting a bit in the monitor can help give a more even stage volume as you move around (and some in the other monitors for the others in the band as they want/need).

IEMs and the band controlling their own monitor mixes seen to be the best way to handle things, but it's probably not for everyone.

Old Verle Miller said:
Most that I've encountered have never worked in a recording studio where a producer is in charge of the end product and oversees everything.
Click to expand...

As someone who's done both, the skillsets required are very different, and in most cases do not translate.

SRHmusic said:
Nothing beats a good conversation with the sound person when starting set up. Decent ones should know what works in their room and appreciate that musician's need to hear themselves and each other. These three you mention sound clueless.
Click to expand...

A good tech doesn't tell the band what to do, but they will make polite suggestions and try to help you improve your approach. If you don't comply and the result is bad sound leading to a bad show - you are not likely going to get hired back by the venue.

The three techs mentioned by the OP do not sound very experienced. I know that's a common occurrence for many of you, but it's not right.

That said... guitar players really need to understand how directional their amps are and how painful they can be in the line of fire. When you can't hear yourself and the tech asks you to turn down... take a good, honest look at where the amp is pointed then correct it if necessary.

KennyWTelejazz said:
One time during a stage setup I had a sound-man at a well known Greenwich Village Club walk up to the stage , pull me aside and tell me my amp was too loud .
I stopped tuning my Telecaster and looked over at my Fender Rivera Super Champ . Then I looked at him and told him no problem , I will turn it down once I plug my amp into the electric wall socket .
True Story
Kenny
Click to expand...

If you are not a vocalist point the amp at your head.

I recall playing in places before monitoring.…….
S

Thanks everyone for the feedback/advice!

A lot of good ideas/advice in here to consider. I had never thought of setting up my amp as a "side-throw" but that makes a lot of sense.

I find it interesting (and frustrating) how these sound guys I have mentioned insisted on keeping the amps themselves quiet but blasted me/us through the monitors. Those monitors were way louder than I had intended to set my amp. But anyways, onwards and upwards!

Guitar should only be in stage monitors for the drummer, thier mids are 2' from thier ears and can't hear yours from an amp that SHOULD be coming at you either at an angle or directly from the side in a pinch. Amp stands can help you hear you, and your amp not kill the people you're playing for. Nobody cares that you lost some bottom on your HRdlx, turn a knob.
Bring your own amp mic and know where to position it.
We've had our bass player scout around at venues and setups, and acts that piss off the sound guy sound like poo, ones that cooperate or negotiate sound good. We've discussed bringing our own pa gear and having our own amateur sound person (or the drummer running it from behind us if the venues real bad).

Things have changed. Previous bands, we pooled money with the other band playing a given night to pay a good sound guy, or brought a friend to run it with a crash course at practice.
You must log in or register to reply here.

New monitors are making me re-think my mixes.
2