I have a tele with a few high frets causing me to play with a tad more relief than im comfortable with. When leveling/crowning a couple frets vs. leveling the whole fretboard. Should I do the job with the neck at the relief I intend to play with? or should i straighten the neck out first? Thanks!

If you're only working on the high spots, one fret at a time, I don't think it should matter.

But if you haven't already, first give the high frets a few whacks with a soft-faced hammer and check them again. They may not be fully seated.

You've checked every fret? Usually there are high spots all over the neck if it hasn't been leveled correctly, and that is a check you would want to do with the neck as straight as possible.

The frets in question are all in the middle of the neck. I went up and down with a fret rocker. Frets 5, 7, 10 are the culprits! and 5 + 7 are only high on the bass side. 10 is high in the middle. The guitar is ~30 years old and I'm unsure if it's been leveled since its build date!

GLee94 said:
The frets in question are all in the middle of the neck. I went up and down with a fret rocker. Frets 5, 7, 10 are the culprits! and 5 + 7 are only high on the bass side. 10 is high in the middle. The guitar is ~30 years old and I'm unsure if it's been leveled since its build date!
Click to expand...

OK, I've done this, with excellent results. With a black Sharpie I marked the high spots that I'd found with the rocker, then I filed only those spots until the rocker no longer rocked on them, and then I crowned and polished them. I did not take neck relief or straightness into account at all, because I was only working on individual frets.

Yep, make it a straight neck then do the individual leveling is what I do. The black sharpie works well.

I had to do one fret on a new bass neck today after it has been strung up for a few weeks..... only one note caused a buzz on the next fret , the F on the A string... the CC fret rocker showed a high spot just off center on the 9th...
first I tried a few taps with a small hammer to seat it a bit more, then taped either side of the fret and wicked some thin titebond under it with a small brush, worked it in for a while then clamped it overnight....

I slackened the strings, put a wood block under the ends to lift the strings up out of the way and used a flat file to knock the high spot down using the fret rocker to test... and re tensioned the strings a few times to test the F note....

I used some light pressure on that fret with the file lengthwise along the other frets... then filed it from the side along the fret to keep a uniform curve... crowned it a bit, slid a fret guard on and polished the fret with 2000 paper...

should be OK now,,,, a bit more playing will wear the strings/frets a bit.. see how it goes...
T

Be aware that low frets can trick a fret rocker. The adjacent fret will look like it's high to the rocker. That's the pitfall of spot levelling - if you level the wrong fret you end up chasing your tail. So it's good to look for other evidence to support your conclusion, eg looking at rocking patterns at adjacent frets, direct measurement of fret height (see below ... but that can be fiddly). And even if you're sure it's high, check that it's seated all the way down before you jump into re-levelling. 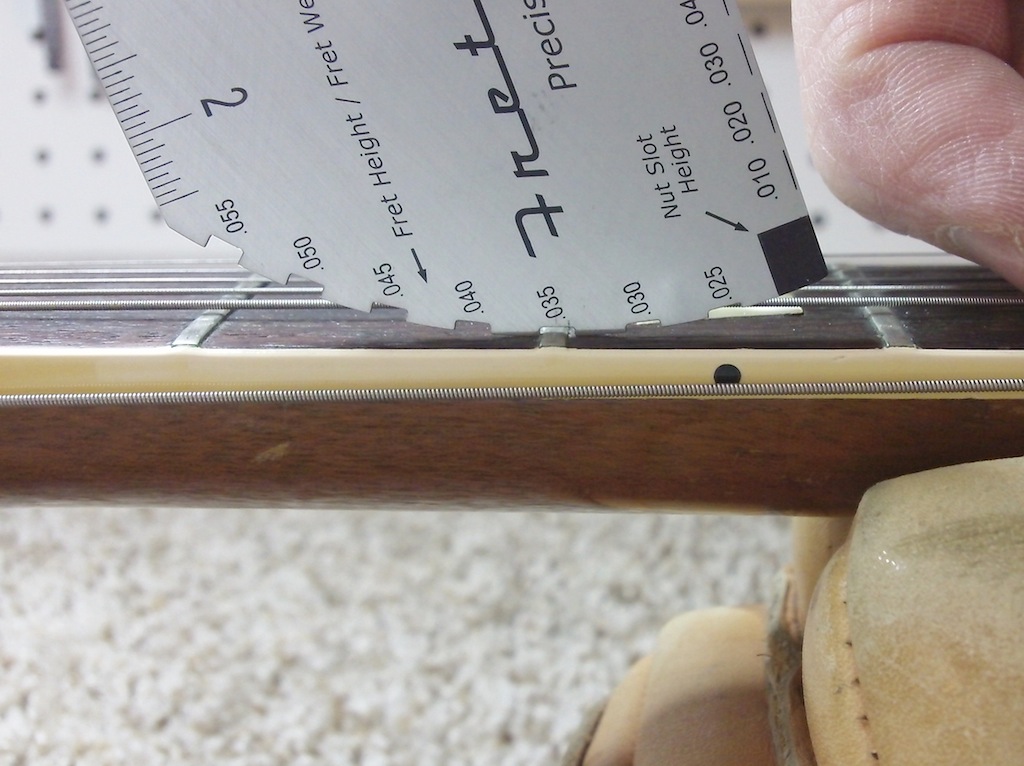 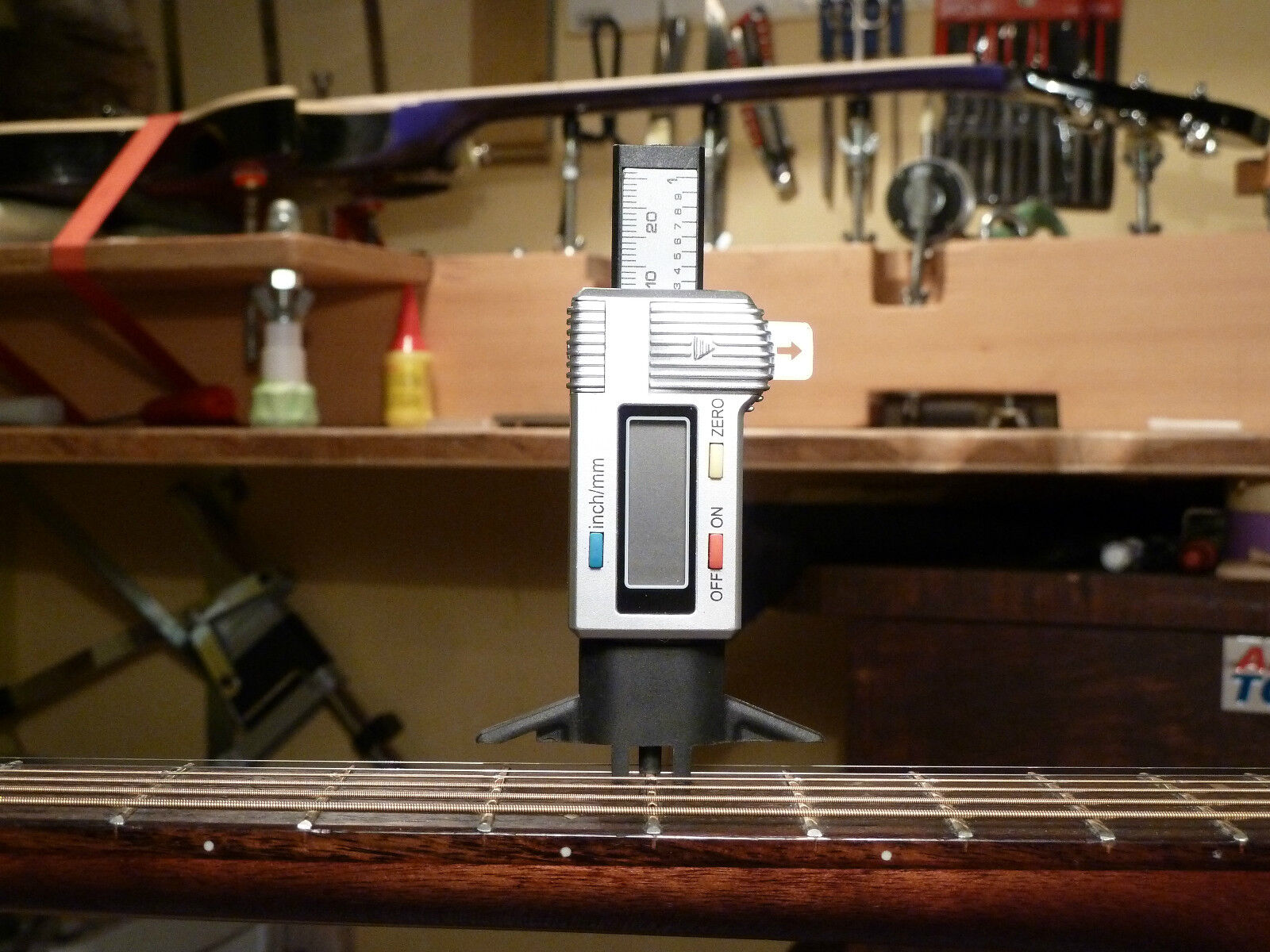 TimTam said:
Be aware that low frets can trick a fret rocker.
Click to expand...

Agreed. It's possible that feet 6 is low causing 5 and 7 to rock.

Rockers... I have one, but hardly ever use it.

I'd never level a neck with a short 3" bar, because it doesn't 'see' enough of the neck, and will follow the (bad) contour, if one exists.

The rocker has the same problem. There's no absolute reference point.

Much more trouble than it's worth, for me. I'll just do the whole neck, and know it's good. It doesn't take that long.
R rad1 said:
and the clever design won’t let the fret get lower than the frets on either side.
Click to expand...

better than a high one in the middle....
T

televillian said:
i think fret leveling was invented by people who sell tools
Click to expand...

All I know is I bought a 15 yr old Korean made Epi Gold Top 56 a couple years ago and she buzzed at two different frets due to two high frets. The Stew Mac Fret Kisser fixed both frets in just a couple minutes and that guitar is one of my best playing guitars.

Just repeating the advice above from Burger - check the high frets to make sure they're fully seated. If not, they can spring down under pressure from the leveling beam, then creep back up so the entire leveling job was in vain! You might need to not only tap the high fret down into place but also wick some thin CA glue under the fret to keep it down. Sometimes you need a fret-press caul to clamp it in place while the glue sets.

I've got this issue right now, but the high frets are 20,21,22. Looks like maybe they actually worked their way out of the slots a hair. Doesn't affect playing until I get up to about the 15th fret, but then it's bad. Trying to decide if I should just buy a file and a crown tool, or take it to someone to level those 3 frets... for me, it's not about the money, it' about the time.... ordering the tools and doing it myself would likely be faster than the 40min drive to the luthier, drop it off, wait for him to get around to it, go pick it up... this is my #1, and I hate being w/o it for very long...

TLDR:
Partly I was against the idea of single fret leveling because it turns out my rocker is very slightly out of whack. Less than .0015" (the feeler I can't slip under), but still plenty to give false readings. Two of the edges were bad, two were good. Not sure what happened, maybe I dropped it. I'm careful, but I've also had it for quite a while. I got some improvement by grinding fresh edges on a belt sander with fence, but for this kind of accuracy... I just ordered a new one. StewMac has them 20% off thru March.

I was curious, so I bought the $125 Fret Kisser. Four diamond grit surfaces, all presumably machined to very tight tolerances. StewMac has such a good return policy, the only risk was shipping cost, and my StewMax membership removes that cost, both ways. So, free to try.

My guitars are all mostly in great shape, since I do a setup when I change strings, and tend to address problems as they occur. But I was able to find a couple high frets to test on.

After doing my best to account for the messed up rocker, I ensured I was dealing with an actual isolated high fret, that couldn't be reseated. The rocker alone isn't enough to tell if the fret is high, or the other one is low. I use the rocker in conjunction with a 6" straight edge. Frankly this part is a bit tricky, and when in doubt, I'm still going for the full fret level.

The tool is 1/4" thick steel, and unsurprisingly quite heavy. Some downward pressure is still needed, maybe psycholgical, but want to make sure you're riding on the 'guide' frets. It took one fret to get over that, and relax a bit. With the combination of pressure and sideways motion, I nearly dinged the good frets, slightly. Not a big deal, just use caution until you get used to it. The other thing is to avoid longer strokes, which will cause the diamond to cut into the guide frets, and then you're pretty much looking at a full level.

That's an interesting point. In general, this tool is only good for single frets, in isolation. It relies heavily on the two adjacent frets being perfect. Theoretically, you could have two adjacent bad frets, high enough on the neck so the longer edge of the tool spans FOUR frets... theoretically.

You can do this with strings on, but you'll need to spread the strings to do the crowning after the level. I capo the first fret, and loosen the strings. Try to loosen them enough to tie back with tape, or one of those under-neck string holder thingies.

End result? It did a very nice job. It's easy to see your progress, and you know when you're done - no more grinding as you work across the fret. The diamond is very effective, cuts effortlessly, and it will do so for years to come.

My third victim was a Duo Jet, fret #14. But I gave it a couple of firm raps with a deadblow hammer, and it went right into place. No leveling needed.


Neither of these guitars had a bad problem. Both were setup nicely, not buzzing. I was being picky, looking for problems, because I had a new tool that I wanted to test. But, if it fixed these so nicely, I conclude it will work equally well if the fret is even higher.

Whether it's worth it to you to own a $125 tool, in addition to all the other stuff we generally have on our benches, depends on you, your goals, if you do work for others, or if you maintain a large collection of your own, etc. 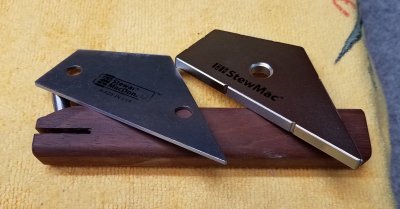 ruger9 said:
I've got this issue right now, but the high frets are 20,21,22. Looks like maybe they actually worked their way out of the slots a hair. Doesn't affect playing until I get up to about the 15th fret, but then it's bad. Trying to decide if I should just buy a file and a crown tool, or take it to someone to level those 3 frets... for me, it's not about the money, it' about the time.... ordering the tools and doing it myself would likely be faster than the 40min drive to the luthier, drop it off, wait for him to get around to it, go pick it up... this is my #1, and I hate being w/o it for very long...
Click to expand...

A single fret leveling tool won't work, as it relies on an accurate guide fret on either side. I'd try seating them with a deadblow hammer.

The placement of those frets makes me wonder. Are they actually high, or do you just need a bit of fall away ground into that neck... But if you don't normally level your own, and don't want to practice on #1... tech time, IMHO.
You must log in or register to reply here.
Share:
Reddit Pinterest Tumblr WhatsApp Email Share Link