This is inexpensive and easy, and quite good sounding.

I have a Baggs M1A installed in my J-50.
I play it through a guitar amp.
I like the sound. Maybe a little electric guitar in there but I expect going thought a PA would make it more acoustic sounding.
Good luck in you search.

don said:
I've got a 1957 Epiphone Texan that I would like to use for recording at home. I don't have an ideal situation for using a microphone so I'm thinking of a soundhole pickup that would not require any mods to the guitar. It has a nice natural sound so something that would not color the sound too much would be awesome.
Click to expand...

Willie D said:
This is inexpensive and easy, and quite good sounding.

That iRig Acoustic Stage is a terrific solution to easily get a very natural recorded sound. I’ve been recording with that into GarageBand for about 18 months with both my steel and nylon string guitars and get compliments every time.

If you were looking for a great and simple live sound, I’d recommend the Baggs 1A. But for getting a natural recorded sound it’s no contest.

What about Fishman's Rare Earth Mic Blend Active Soundhole Pickup: magnetic and inside microphone in the same unit:
https://www.fishman.com/portfolio/rare-earth-mic-blend-active-soundhole-pickup/

INFANT said:
I have the Baggs M1 and it’s the best sounding pickup that I’ve tried in my Martin.
Click to expand...

This is one of those moments, when something works a lot better than it should. It looks goofy, its an emag pickup which shouldn't sound acoustic at all, and a temporary mount usually compromises a lot over a better install. BUT, like you say, of all the pickups I've tried, and shared, the M1 sounds the most realistic. I think two unintuitive things are at play with these.

It uses the sound hole location to "move" the pickup out of phase with the strings and increase the attack decay, like an acoustic guitar does. It also has a mysterious moving internal works, maybe a sprung mass, that also works to manipulate phasing and response to be more acoustic like - almost like a mechanical choke.

Anyway, they are worth a try. I hate visual evidence of a scabbed on pickup, but because they sound so much better, I've actually retrained my reaction to be favorable. If I see one, I look fwd to hearing the player now.

If you're going to go with a magnetic pickup, seriously consider using the Martin Monel strings... They sound awesome on those old sloped shoulders and is a good magnetic alloy for the pickup.

My Inspired by Texan came with an under saddle pickup that I didn't like. I like the bone saddle seated flat in the rosewood slot.

The same pickup manufacturer made a magnetic pickup that fits discretely at the end of the fretboard. You may be able to find one NOS somewhere. 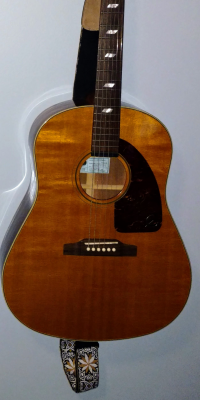 DougM said:
At the store where I worked, we sold a ton of the Dimarzio Virtual Acoustic. It sounds really great and is affordable to boot. View attachment 844524
Click to expand...

I'd go with that.

bottlenecker said:
Soundhole pickups won't color the sound, they will make a completely different sound. The few that can get a realistic acoustic sound have mics built in, so why not just use a mic?
I love soundhole pickups, but for connecting to an amp to get a new sound. If you want to capture the acoustic sound of your guitar on a recording, it has to be a mic. Any mic situation will be better than any pickup for this.
Click to expand...

Pickup don't sound like mics. But I think the real object of the game here is just to find a soundhole pickup that sounds good.

It's in my tote bag as a backup should my guitar's pickup/preamp has an isssue, or for someone sitting-in.

It has a good, warm sound, but is passive, so you gotta crank it.
Click to expand...

Mine's cable wore out after about twenty years. What's that, about $4 a year? Not bad!

Charlie Bernstein said:
Mine's cable wore out after about twenty years. What's that, about $4 a year? Not bad!
Click to expand...

I don't think I've used mine that much. But it has come in handy over the years. (Back when I got it, I was doing electric gigs only, then later, had pickups installed in my Martin for gigs)

I learned the hard way, a while back:

- don't do an electric gig without bringing an amp emulator! ( I bring either a Bad Monkey OD, or Joyo American Sound)
Gig savers!

bottlenecker said:
Soundhole pickups won't color the sound, they will make a completely different sound. The few that can get a realistic acoustic sound have mics built in, so why not just use a mic?
I love soundhole pickups, but for connecting to an amp to get a new sound. If you want to capture the acoustic sound of your guitar on a recording, it has to be a mic. Any mic situation will be better than any pickup for this.
Click to expand...

THIS ^ I have tried many, including just using HB or SC pickups. The piezo under bridge is more of an acoustic sound and mic'd is better than that. The soundhole pickup is a good sound, just different.

I've tried a bunch on my Blue Ridge, so far the best tone-wise is the SD lipstick. I do run it through a clean boost pedal as it's very low output.

Magnetic soundhole pickups are all I use. I've tried most and was a longtime Sunrise user, traditionally thought of as the best you can buy. But a couple years ago I tried a Fishman Blackstack (their Sunrise inspired pickup) and found I prefer it to the Sunrise for the sound, weight and ease of install.

I can install the Fishman Blackstack w/o slacking the strings.

Charlie Bernstein said:
Pickup don't sound like mics. But I think the real object of the game here is just to find a soundhole pickup that sounds good.
Click to expand...

The OP said he wanted it for recording, and wanted to capture the sound of his guitar. No pickup is good for this. If I HAVE to use a piezo, K&K style is definitely best. I'm 100% NO undersaddle.

If you want a soundhole pickup to just sound good, I'd go with a Lawrence A300 into a clean amp, and get a unique electric sound. If you want one to sound really good, get a vintage DeArmond. They sound so much better than any modern soundhole pickups, but they're expensive. A modern exception might be Galetta's Bigsby style soundhole pickup, but that's also very expensive. I might have to buy one anyway.


For a real acoustic sound live I use an audio-technica ATM-35 or ATM-350 clipped to the edge of the soundhole, or a back brace, pointed at a spot behind the bridge from the inside.
But if I'm only playing acoustic for slide songs, I get torn between using a mic, or a soundhole pickup connected to my electric amp. Both sound cool in different ways.
S

bottlenecker said:
I love soundhole pickups, but for connecting to an amp to get a new sound.
Click to expand...

+1. I like the Fishman Neo-D humbucker but not at all because it has a faithful acoustic sound. In fact, part of why I bought it (besides affordability) was to avoid the typical piezo-style sound, although the worship group I was playing with when I first got it probably would've preferred that.

There's a great Sonny Terry & Brownie McGhee video on YouTube where Brownie has the pickup in his Martin D-18 plugged into an amp and I LOVE that sound, but it's not an acoustic sound at all.

Sparky2 said:
I have used the Lace California sound hole pickup upon occasion, and I must say that I like it a lot.

I'm not finding much use for it lately though.

Do you want me to send you this one?
You could try it out and see how you like it.

I could have it in the mail to you some time tomorrow, if that sounds like something you'd like to fool around with in your recording.

thats mighty kind of you - I'd love to try it and either return to you or buy from you depending on results - I'll PM you.

Wow lots of great suggestions to check out. While I can see most everyone is in agreement that a soundhole pickup wont sound like the natural guitar I do know that I don't want an electric sounding acoustic guitar - I sometimes like that sound (works well in Amy Helm's band) but not for what I have in mind. I use Logic Pro X and there is a fair amount of fine tuning you can do with plug is and EQ and room ambiance so I can probably get close with a really good soundhole pickup. Most of my music is electric but some of the americana songs needs an acoustic playing Diamond strums or just chugging on the background but it wont be the primary guitar sound. Thanks so much!

I'm super pleased with my Baggs M1A. It does not perfectly mimic a miced up sound but nothing does. But it does not produce a quacky annoying sound nor does it just sound like an electric pickup in an acoustic guitar. Very useable for the stage which is why you see a lot of pros use them.

Thank you so much!

Most of the artists I like use soundhole pickups. I switched over awhile back and am happy enough with this one. It has has a volume wheel but it's been discontinued. I want to get a Woody XL for a hard wired fit. It has adjustable pole pieces.