While waiting for pots to complete my parametric EQ, I got a few more of Madbean's 1590A boards. While I have a Rat and a Big Muff, I don't have miniature ones, so here we go!

The "Runt", Rat board, quick stuffing job with a very special IC coming courtesy of a fellow member here, thank you FL! 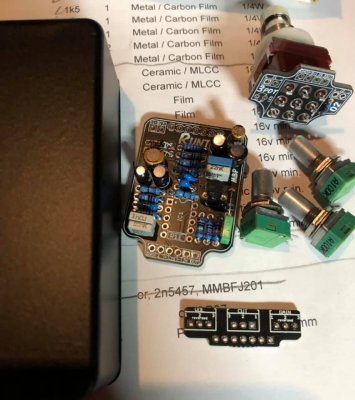 What chip are you using?

jman72 said:
What chip are you using?
Click to expand...

Time to drill an enclosure or two: 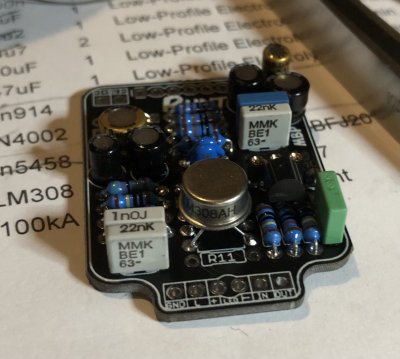 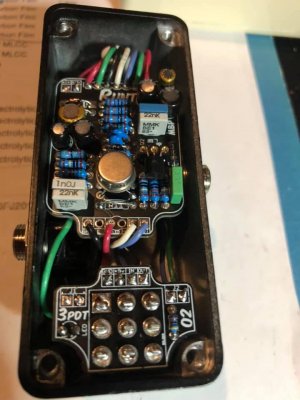 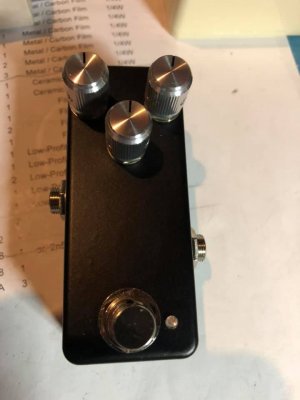 I won't be able to lacquer this until at least tomorrow, hopefully it doesn't smear. The last all black with white text I made was the WIIO overdrive, it took all three that I made to get something decent. 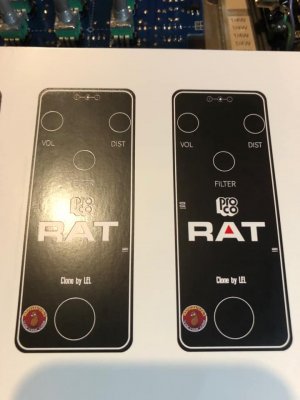 Thankfully no smearing! It'll dry overnight then I'll hit it with a couple more coats of lacquer. I think I'll work on the mini Big Muff in the meantime. 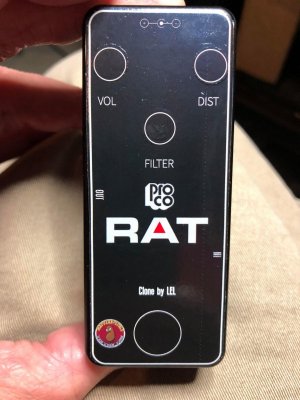 Man, what a great pedal! I don't have a Rat on my board all the time so I forget how awesome they sound, and the mini version sounds just as good as any Rat I've played since the early 80's. 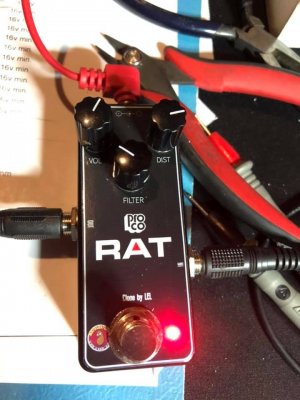 It's a very tight build, definitely more challenging than a BYOC 125B Rat kit was for me. Super creamy distortion, great with both guitars I have out on stands now (Am. Special Partscaster w/ Florance TE-50, Squier 51 with a Zhangbucker bridge humbucker), total rock in roll in minature.

Special thanks to FL for the LM308 can, it was getting an OP07 originally and I think the chip takes this one over the top!

Pedal building for me has truly been a "Rabbit Hole", mini Big Muff in the works. This one is getting vintage 2N5133 transistors 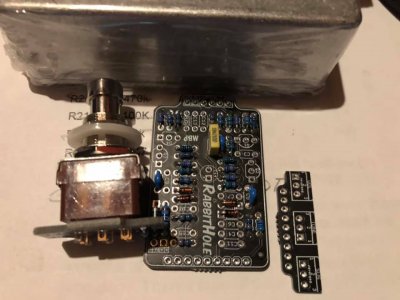 Cool old 2N5133 NPN transistors like the originals, the board is a lot smaller! 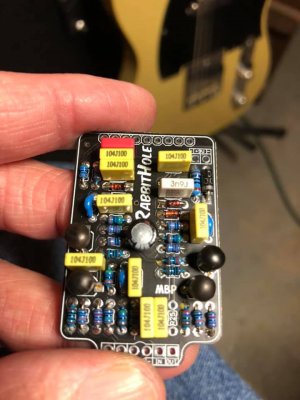 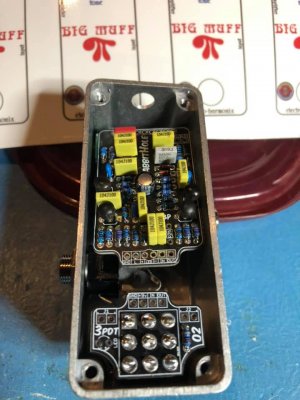 I’m 1590a (or two pedals in a 1590b) as much as possible. The DIY one is a ringer I threw into an A/B switcher kit (since all I had was a pen iron and no drills or anything here, I built it in an Airbnb, hahaha). The 125B is just whatever came in a devi clone kit (I’m sure I can squeeze that down, i did up a bells and whistles "general devi" for 1590b). I’m coming back to the states soon and want to see if either the afterlife or an adaptation I made of the flatline will work for me better than the mad professor. Also pardon the dirt, hahaha. Cool! My son has lived in Airbnb's while traveling for work.
I've built some massive and complex pedals (Aion's Lab Preamp and Boss Dimension Chorus) and 1590A's seemed like just as much a challenge without huge parts lists. The thing about these little guys is that they sound just like their bigger box brothers. In the case of the Rat I just completed, I think it sounds better, so I'm building another with the TO-99 can LM308. The Phase 45 and Orange Squeezer sound just like the others I have (DOD 201 and a Henretta Orange Whip), and the Madbean "Donut" sounds just like my EHX, only better with a switchable gain increase. 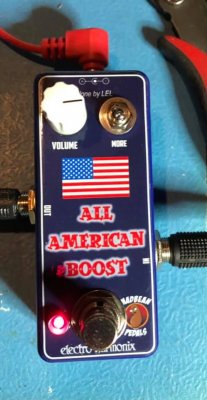 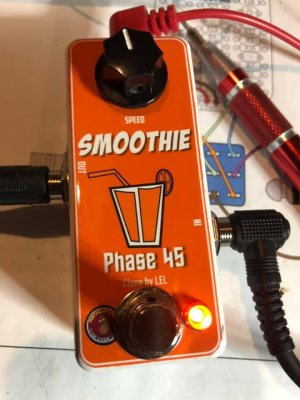 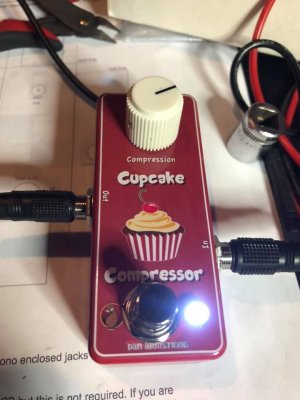 I built both Madbean's G sized "4:1" compressor which is based on the Afterlife too. The NSL-32 I used in the A sized Flatline works much better than the XVive VTL53C in the 4:1 which surprised me as I've used them before with good results. The NSL-32 came from eBay and wasn't expensive. 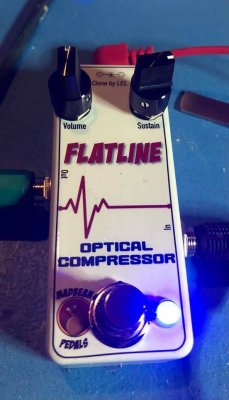 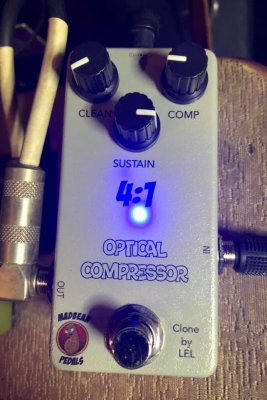 I wish there were more PCBs around for A sized pedals. I have a Fat Boostered after the BMP, and the second Rat. I'm also going for a Klon in an A, that's gonna be craziest thing for a small box through hole build. The only A sized commercial boards I know of are from Madbean and Fuzz Dog's "Fuzzpups". The Merlin's Glassblower I just did in a 1590B could easily fit into an A, and I think you could use Rullywow or Jed's Peds Naga Viper boards in an A. Otherwise it's Vero/perfboard.

Noisy, raucous fuzz, that sums it up, it's a Big Muff Pi! Fun build too. 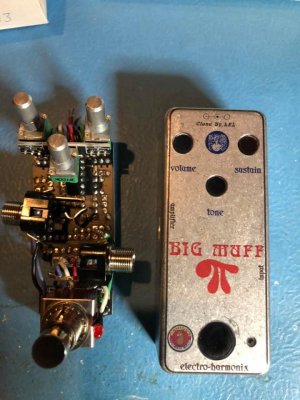 The clear decals always look a little muted, the "ram's head" logo printed purple but looks more blue now that it's applied. It's a hoot!

Another Rat and a Fat Boostered coming next, the BMP sounds great! 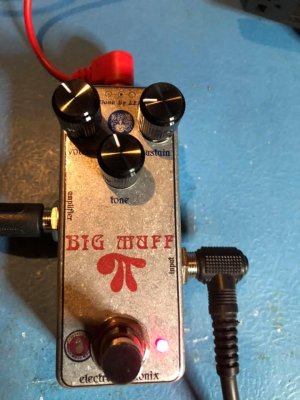 and...waiting for parts, for the Rat at least. 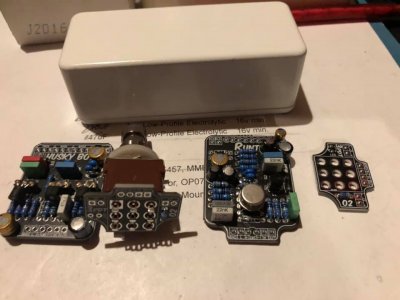 Location
Just past 11 on the Dial

Nope nope nope
Can't imagine Having to plug pedals in, having no battery.
Have to be able to run my rig in stand alone mode as much as plugged in. It's also been good to be able to unplug the wall outlet power for noise reduction...
Nice work though...

I made a lot of pedals with a battery snap but I never use them, especially since I picked up a Truetone CS12 power supply. I sometimes use a battery when testing circuits though (snap adaptor to 2.1mm plug).
You must log in or register to reply here.
Share:
Reddit Pinterest Tumblr WhatsApp Email Share Link