What are your thoughts on solid state in 2020?

I have always liked SS amps...

I tend toward a cleaner tone...

Absolutely love my Pritchard Gold Estoc. (Apparently, TDPRI's software won't let me upload the front of the amp right side up!) Had one of these for a while, got me through some Fender-less pinches. Definitely a jazzer's amp, no Fendery twang at all. Found a sweet spot on the gain channel using the single-band parametric e.q. Late 70's I had a Yamaha JX40 solid state. Played it through most of the 80's.
Then Marshall 8100 valvestate.
Then a Peavey Prowler tube amp
Then Pro Jr tube amp
Then a Peavey Blues Classic ( a classic 50 with a 15" speaker)
Then a Roland Cube 80xl
Then a Vox Ad60VT
Then a Vox VT50
Then a Mustang III
Then Peavey Bandit Red-Stripe

I got one of these for free recently. A Marshall Valvestate VS100R. I bought the head version and 2x12 cab when I was 14, so it was nice to try one of these amps out again after over 20 years.

I took it to rehearsal a few months back and my verdict was that it sounds pretty good. However, it doesn't cut through the mix like my usual valve amps seem to. I'm not sure if that's because it has a solid state power amp or not. I would happily use it at a gig though. 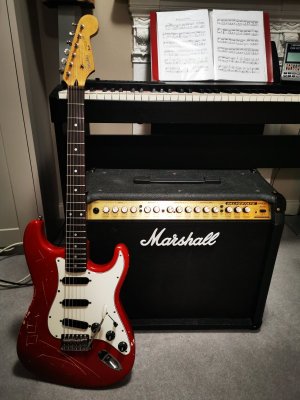 And I won't be the last person to say so.

Quilter Micropro Mach 2 8" -- sounds much bigger than its size suggests!!

And I won't be the last person to say so.
Click to expand...

My Hotone Purple Wind sounds very good indeed. As does my Harley Benton HB80-r. The Hotone is small, the HB is huge. I de-badged the HB as I despise their logo, and after a gig, I got collared by the one neck-beard you don't to get collared by. He insisted my Peavey sounded just like a valve amp. It doesn't. At full chat, it sounds broadly similar to an H|H. Ever been told your amp is a Peavey and you're incorrect, with added 'I think you'll find ...' when it most certainly isn't
I had a Behringer Vintager GM110with a 10" Jensen speaker. Claimed to be 30 Watts. Claim all you like. It sounded awesome!. It featured analogue modelling along the lines of the Tech 21 it was ripping off. The speaker emulation was passed to the built in D.I. and that made setting up a piece of cake. I was told that was a Fender by another drunken neck-beard with halitosis. Sadly, it proved not to be waterproof and went 'phut'

I had two Marshall MG100DFX models. They both died. The early ones, or at least the ones I had, had a small, CPU type fan cooling the output IC. It wasn't sufficient. If the fan overheated, in a delicious mix of irony, the output IC went 'phut'. The shop swapped the second one for an MG50DFX. It too died, which is when I bought the Behringer. Some very good sounds to be had from them, let down by a tendency to 'phut' when Spinal Tapped to the max.

MG15DFX Delivered with the effects board detached. It could never have been fitted properly, despite all the QC assurances. Not too bad for dinking around at home with, but turn it up and the Harpies think a sister is trapped nearby. Modified to allow it to run an external speaker, and it improved substantially. I passed it on to a Son of mine. He seems happy enough with it.

I don't dislike tube amps by any means, but I enjoy a good SS or digital amp just as much as any tube amp.

And I won't be the last person to say so.
Click to expand...

Another fan of the Pathfinder 15r here.

A Sears Silvertone "Mini Stack".
This is what the head looked like...
Fond memories of this amp, along with the Silvertone guitar I picked out of the catalog. Here's a pic of a similar amp, the Audition with it's 2X8 cab.
The Silvertone was nearly identical. The first really good solid state amp that comes to mind is the Roland JC-120. I think Albert King used an Acoustic 150.
You must log in or register to reply here.