Paths are pretty straight forward in a schematic but I found hard trying to understand what is going on in a Layout in general so i tried to "visiualize" it. Simplified the Blackvibe 6V6 Layout (one Input, one output, etc.)

Wiring colours are not according to the way they might be generally used:
Yellow is AC signal into tubes
Green is AC signal out of tubes (except for the heater wiring)
red is DC
black is to ground

from output Transformer into speaker

Power (DC) path (starting at the power Transformer)
(5V for Rectifier Tube Heater, 6.3V for all other tube heaters and 50V for Bias Tap have different colour wires)

Would you guys agree with all of the above or do have some parts seriously wrong? Feedback appreciated!
Last edited: Nov 26, 2022
2

Here in Europe we don't have concept "ground". Sometimes over 50 years ago it was defined as "zero" where secondary current return to power supply. On Mains a Safety Earth was defined and amp Chassis is SE. Therefofe Chassis is forbid to be uses to flow operative current on Mains operative electrics.

Detach "power amp ground" from chassis and make Common full board length and wire all zeros and HV CT to it.

I use insulated plastic loudspeaker jacks and a shielded NFB cable and connect both ends of shield and NFB circuit operate.

Perhaps it does not make much difference but I install input tube grid block resistors to tube socket end of shielded cable.
Last edited: Nov 26, 2022

I would make the cathodes on V1 yellow wires.

For one, they are indeed signal paths. Two, they don't go directly to ground as other black wires in your drawing do.

Third, your V1 and V2 are inconsistent in this respect. The PI has cathodes that go to ground too, why not black wires there?

I think the fact that the cathodes eventually go to ground is irrelevant in the context of your activity here. I agree with how you did the PI cathodes, make them yellow. Power Amp Ground was just to illustrate where grounds go, not where it would actually (physically) go - I have to look more into this.

I made a mistake at the presence pot - there is a wire going to NFB Tail - fixed it.

Speaker Jack to NFB is signal out? It should be green then for consistent colouring?
Shielded cables would be 1) from input jack 2) from volume pot 3) from speaker jack then?

I updated the cathode wires to green (as I understand it it is (part of the) signal going out)
Last edited: Nov 27, 2022

justusberlin said:
I updated the cathode wires to green (as I understand it it is (part of the) signal going out)
Click to expand...

Yes green, they are outputs.

where is this coming from and where would that go? Thank you!

justusberlin said:
where is this coming from and where would that go? Thank you!
Click to expand...

justusberlin said:
where is this coming from and where would that go? Thank you!
Click to expand...

yours is already on your layout and is correct, grounded.

The preamp bus bar is grounded at the input jack. The split preamp/power amp ground is by design. That's how Fender did it and it works fine in this amp.

Since the ground scheme has been mentioned, let's have a look.

It is a two point ground scheme. It uses the chassis for return current.

I have color coded the nodes. Red and green are the B+1 and B+2. They service the power tubes. Blue is B+3. It services the PI (V2). Lavender is B+4. It services V1. Yellow shows the bias cap/circuit.

(The Presence pot circuitry has not been correctly depicted. If/when it is connected, it is part of the Blue B+3 node.)(I have added the 1M resistor on the input jack.)(No shade on the OP.)

Following the colors we can clearly see the green B+2 node capacitor is not connected to the power side of this two point ground scheme.

I prefer to include the PI (Blue B+3 node) with the power side when using a two point ground scheme. Clearly this one has it on the input side. Imo, the OP has a choice of where to put the Blue B+3 node and whether a one point scheme might be of interest. Choices choices. 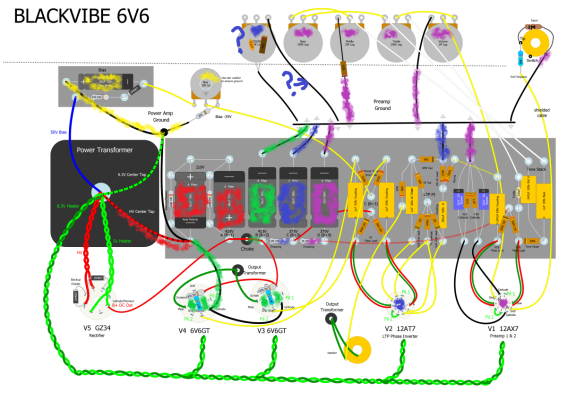 thanks @Lowerleftcoast - this helps a lot.
Still so many question marks left.

Most layout ground the B, C, D Filter on the preamp ground bus so I just kept it. Makes sense to ground B+2 to the Power Amp Ground though.

I will have to read up on whether to ground B+3 in the Power or Preamp section and one point grounding (star? grounding).
Last edited: Nov 29, 2022 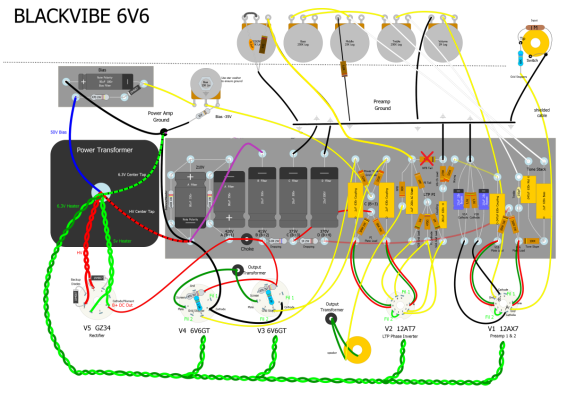 Transformers do not pass DC. The Output transformer serves two purposes. By connecting the primary center tap to B+, it supplies B+ DC to the plates of the power tubes. The turns ratio (primary to secondary) converts high impedance/low current to low impedance/high current to drive the speaker.
You must log in or register to reply here.

F
At what level is the phase inverter supposed to clip?
3 4 5