Short film about the Lomax recordings.

Bribery and coercion. An interesting take on a Blues myth. Dark and unsweetened. 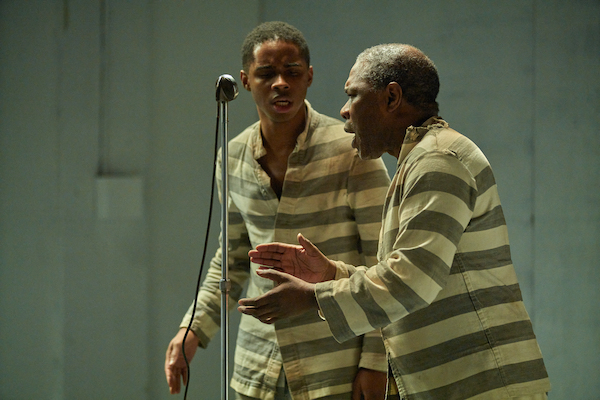 "Night Music" is a short film reframing John and Alan Lomax's quest for prison field recording. We reviewed it. Enjoy our quality coverage.

I was just listening to some of their recordings from the early 30's regarding American slaves who were still alive at that time, in their 80's and 90's, some were 99-101, talking about being slaves before and during the American Civil War. Very enlightening stories. When they say things like " I belonged to so and so" or "I was the property of Mr. XYZ on the XYZ plantation" - Man, it's surreal cause to them it was normal speak, even as they were recording for the Lomax's, but today it's hard for us to imagine "belonging" to someone or the "property" of someone. Wouldn't have this recorded history without the Lomax's efforts.

I also have many recordings of much of the blues music they recorded then as well. If it were not for John and Alan, all of this would've been lost to the ages. Technology had arrived just in the nick of time to capture these historic details, told and sung by those who lived it, for those of us in the future to hear and enjoy, and ponder. Thanks for uploading this! Very interesting take on the Lomax's. An angle I'd never really thought about before, but no doubt they had to endure some things like this back then in the deep south.

EDIT: I think it's important to remember that the Lomax's were, in fact, not the only ones out there in the field doing this sort of work during the WPA era, but they were the most prolific. I'd say a BIG thanks to all those who were out there in the field in those days, capturing history for us to enjoy today
Last edited: Jun 26, 2022
B

I wish John Lomax (in "Night Music") had told the singers that that particular room was mandated by the warden! omg

Chris Strachwitz of Arhoolie Records travelled around collecting songs, too. I heard him talk about his experiences. Such as, at one juke joint the people there called the sheriff simply because a white man (Chris Strachwitz) had shown up.

I wish the "Night Music" film makers could be enabled to make a full-length movie with blues themes, maybe set in e.g., 1949. Before the audience for blues was significantly white. Maybe with some of the tone of the movie "Nothing But a Man" starring Ivan Dixon and Abbey Lincoln. (yes, "Nothing But a Man," 1964, isn't 1949, but it shows human situations well)

No Ralph Macchio, no Steve Vai or Dan Ackroyd. All right, ok, glad some blues musicians got a good paycheck from Blues Brothers, OK, but a good movie with a blues background has yet to be made, ime. The flick I picture wouldn't need a pile of State Patrol cruisers in a fluorescent-lit shopping mall.

"Honeydripper" was directed by John Sayles'; ime his style isn't fluent. The director of "Ray," to a lesser degree, is also guilty of "telling, not showing" at times. "Cadillac Records" ok, a worthy effort I guess. "Devil in a Blue Dress" was pretty good, needed more blues, in addition to Lloyd Glenn's "Chick-A-Boo" under the closing credits, to classify as a blues movies.

Btw that little bit of "This Little Light o' Mine" at exactly 6:21, sung by Doris McMurry*, 1939, near Huntsville, Texas, in "Night Music" is more melodious than the version we sung in 1st grade! ime

*from the closing credits of "Night Music"
Last edited: Jun 26, 2022
You must log in or register to reply here.