So, my EART 335 semi-hollowbody arrived intact yesterday. I'd like to share some things with the group, since reviews here have helped me so many times.

Since there are many EART reviews on the internet, I’ll try to give you the impressions of a long-time Fender guy and do-it-to-yourself luthier who decided to try a cheap ES-335 knockoff before going whole-hog into Gibson or some other high-end instrument. I’ve been playing Strats and Teles exclusively for about 15 years now.

Because this guitar does deserve some recognition in today's market, I'm going to start with some things that are astonishing. Really.

Keeping in mind that this is a $400 import delivered in a single box (they really should consider double-boxing), the guitar was in excellent shape. Pretty, with its natural “open pore” satin sunburst finish, which I’ve really taken to. EART says it’s mahogany. I’m going to say that it is. Very lightweight ply.

The neck is said to be roasted mahogany with a bound rosewood neck, and I'll go along with that as well. Is the nut bone, as they say? Could be. There's enough meat left on it that I could shape it a little more to my preferences.

Overall, the neck is tastefully done, though the bright-white binding might have looked better in ivory. It has a compound radius and a full feel to it, neither fat nor skinny. It does dive a bit because the body is so light. The medium-jumbo stainless frets (possibly 6150 equivalent) and fretwork were indeed all that I’d read about - - better work than I do, certainly. Frets are polished and slick as ice, the ends rounded. The dual-action truss rod has an interesting feature at the adjuster - - its cover is a little door that swings open for instant access. I took a deep breath before tuning up, stretching the strings, and checking the action.

I checked string height, nut work, relief, tone and string bending up and down the neck. At this point, I was amazed, and I say that knowing the word is overused. It seemed impossible that an action so low could be buzz-free (or as close as I’ve ever experienced).

On a hunch, I pulled up the Gibson factory settings for an ES-335. Again, to my shock, it was CLEAR that someone had taken the time to set up this guitar using those specs. It was clear. Either EART is paying people to do this work, or they are using some sort of computer-aided device, like Plek, to do this. Yes, going from 5/64” height on the low strings to 3/64" at the high E, 22nd fret. Relief at the 7th fret, strings depressed at the 1st and 15th frets, left barely room enough to pass a piece of paper through. Intonation did not need to be tinkered with.

The tuners resemble Grovers, but are, of course, just look-alikes. They feel a little imprecise when tuning, but they do hold well.

Other hardware looks okay but has the shine of cheaper chroming. Not bad, but you can tell. Look carefully enough and you can see that alignment of the neck, the bridge, and the tailpiece is not dead-on. Not bad, not noticeable to anyone other than a guitarist. Same for alignment of the pickups, particularly the squaring of the top of the neck pickup with the heel of the neck. I’ve seen worse.

The jack looks a tad cheesy, but works well. The three-way switch does the job easily and reliably but feels less-than-premium. Same for the pickguard. Binding is quite good, with none of the stain overrun you see in some pictures around the internet.

As for the Korean alnico-II pickups, what I’d heard elsewhere seems accurate. The bridge is a little brighter than some people expect - - which is perfect for me, as a single-coil lover. Far from “ice pick” bright. The other two positions are nice, but darker than I’d use in general. Signal shaping at the amp does wonders. Though the pickups are no-names, rest assured they do have character. They sound good, whatever they are under the hood.

EART is putting their money where they should in a guitar at this price - - and that is in the neck. I have never picked up a guitar in its class that was so “ready to play” right out of the box. Aesthetically, it is pleasing. I like the finish much, much more than I thought I would. The action is different from my Fenders - - noticeably. Not in a bad way. I suspect the guitar came with 10g strings rather than my usual 9s. For my testing, I ran it straight to a Quilter Micro Reverb 101. This instrument has spirit - - whether clean or dirty, it has a personality, and one that I like. Another reviewer admitted that he couldn’t put it down for days after it arrived. I think I get it. 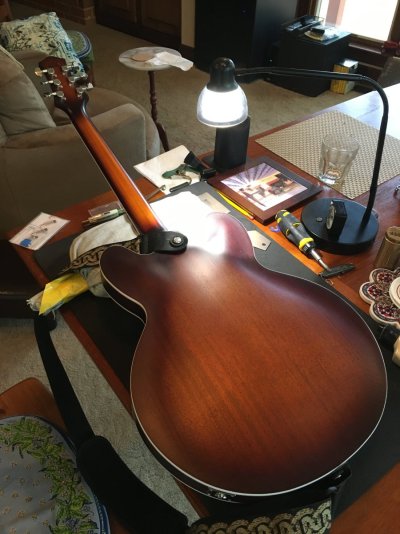 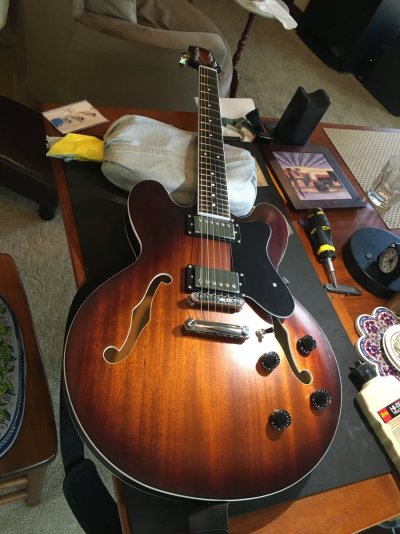 And how are we feeling size-wise, or re. any of the other concerns that kept you from going "whole-hog" in the first place?

Well that looks really nice and also a good review! Thanks and have fun!

SixStringSlinger said:
And how are we feeling size-wise, or re. any of the other concerns that kept you from going "whole-hog" in the first place?
Click to expand...

When you're so used to the "straight as a stick" profile of a Fender guitar, the angled neck and tilted peghead at first seem alien. I have a little belly, to put it charitably, and somehow the guitar seems to stand away from my body more than my heavier solid-bodies. Also, where my right arm drapes over, I really feel the edge of the guitar, with its 90-degree corner.

On the positive side, the woody sound I expected is there. My wife, hearing me strum it acoustically, said it sounded noticeably more alive than any other guitar I have besides my dreadnaught acoustics. I can see playing it for practice without amplification. Not at all familiar with the "tone-o-matic" way of doing things, but apparently it can get the job done.

You know, I think I'm going to be glad I did this. It's fun, it's different, its tones are truly sweet, and I find it attractive. Coming days and weeks will reveal more, I'm sure.

And thank you for the great review.

I’m not even looking for a guitar, but appreciate learning about what to expect from an unfamiliar brand.

I put together a used Ibanez Artcore and found that I have to hold it a little differently than a Tele or Srat, or I get "tennis elbow" tendonitis because of the different geometry.

Thanks for the great review.

@ChicknPickn I’ve been looking at these this week. Just wanted to ask if you’re still enjoying it over a month in or have you moved back to your Strat/Tele home base?

thanks for the great review. nice guitar

guitar1125 said:
@ChicknPickn I’ve been looking at these this week. Just wanted to ask if you’re still enjoying it over a month in or have you moved back to your Strat/Tele home base?
Click to expand...

I like it so much I have to be careful not to sound like a paid advertiser. Which I am not. Great neck, really like the pickups. Sweet cleans, but gutsy growling as well. Very pleasing to me aesthetically too. The satin open pore finish is a really good look. Wouldn’t be ashamed to take it to any jam session. Mine came with a setup I didn’t have to touch. And I’m not easy to please.

For now, the solid-bodies are getting a rest. I‘m really into the semi-hollow vibe. An unexpected treat.
Last edited: Nov 18, 2022

I can imagine that. I mean, for $400, the EART is a lot of guitar. But the Gibsons are legendary for a reason.

Never heard of Eart. But I keep thinking a line from “Private Benjamin.” Most of your targets are inert, however, some of them are ert.

That guitar is stunning.

That's a beautiful instrument. Thanks for the review.
You must log in or register to reply here.

Guitar Necks. How Important to You? To Me ..... The Most Important Part of an Electric Guitar.
2 3