setting up an eq

Looking for tips/suggestions on setting up a 10 band eq. i always seem to make my sound worse LOL so any help is appreciated and I hope everyone is having a good sunday

I used to use an EQ all the time. Mostly to adjust for certain "rooms".But eventually decided it was a tone sucking device. While it works to enhance or degrade certain freq's, it also seems to take away some good.

Setup: Set all sliders flat.
Play each string some and find which slider effects that string's notes the most. Maybe put a piece of tape on the unit and mark it for now.
Listen and decide what you want more of. just try tweaking some a bit.

jdolecek48 said:
Looking for tips/suggestions on setting up a 10 band eq. i always seem to make my sound worse LOL so any help is appreciated and I hope everyone is having a good sunday
Click to expand...

This is from my MXR. Should be applicable to whatever you have.
Read the instructions and hints. Note the parts about clipping and placement of the pedal (I use mine in the effects loop). And just keep fiddling with it. 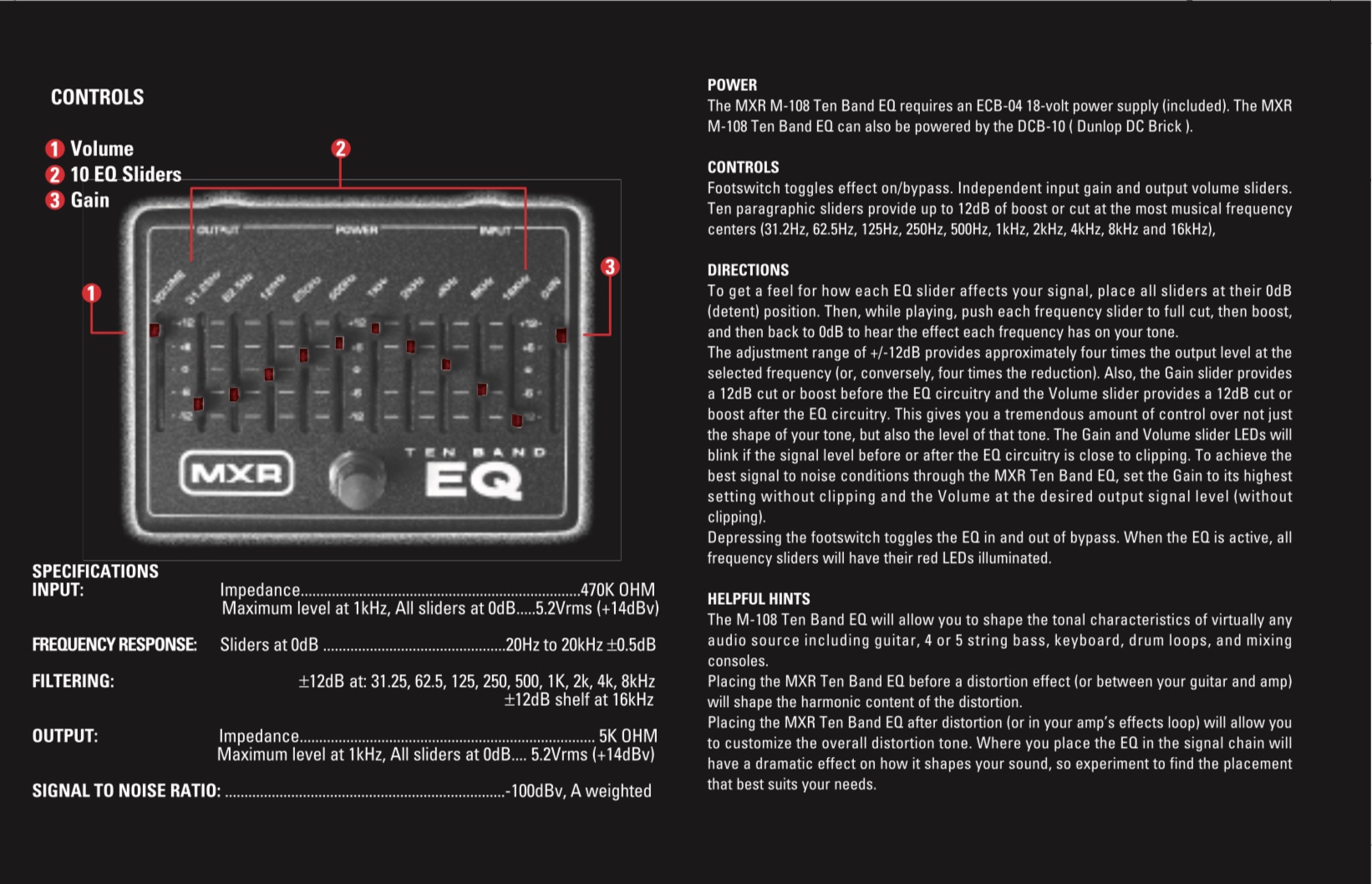 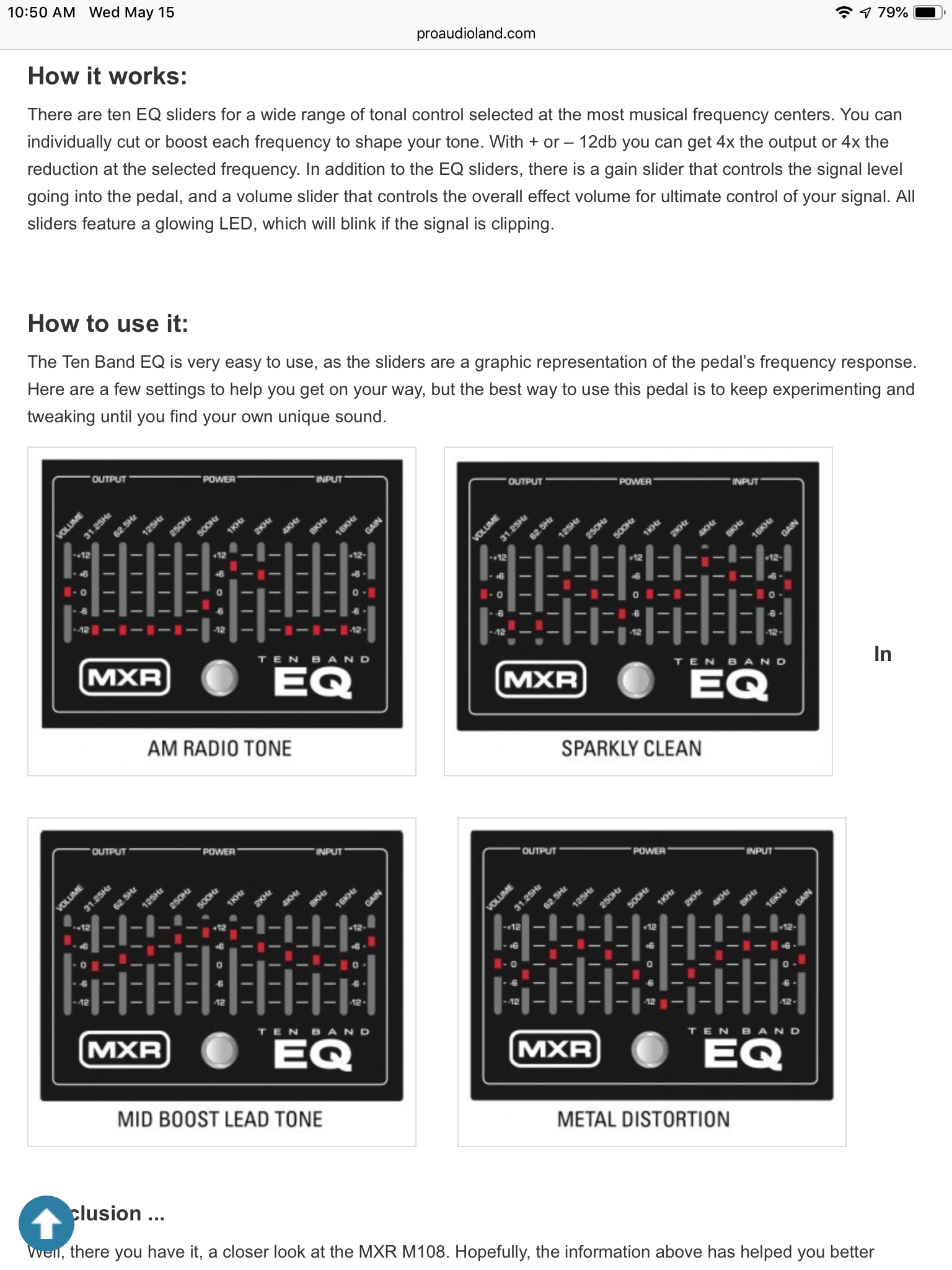 Subtract, don't add.
This is what old-schoolers will tell you.
Of course, as guitar-players we know better, which is that everything sounds better on "10".

Have a friend work the sliders while you play....so you can't see them. Then just play some rhythm and leads while you tell him what you want to hear and tweak until you get there. If your friends is a guitar player that would be a bonus.

1300 E Valencia said:
Subtract, don't add.
This is what old-schoolers will tell you.
Of course, as guitar-players we know better, which is that everything sounds better on "10".
Click to expand...

The tone stacks on most classic tube amps are such that 10 is actually zero, and any thing below that is -1 to -10.

Make small adjustments. I once saw Pete Thorn's video on dialing in an amp. He played only the open A string the whole time.

This gets me in the ballpark, and I tweak from there. Caveat: I play heavy handed, with meaty highs-attenuating hands, on heavy strings. I tend to set bass knobs pretty low on everything and push the upper mids. People with a lighter touch, attack or strings might find my settings strident/shrill/thin.

Tom Bukovac is one of Nashville's top session guitarists...

At the 33:25 minute mark of this video he get's into a variety of uses for the Boss GE-7.
Don't worry that it's not the MXR 10 band, the principles will be the same!

"Subtractive" EQ is definitely the place to start. One thing that I think is really important to note is that an electric guitar really exists b/w about 80 - 6,000Hz. Frequencies bellow this just kinda create mud, and above are over about 10K are largely fizz.

The first thing I would do is take the 31Hz slider and take it down to ~6dB. These are frequencies that on a guitar you will NEVER need. They just add flub and will diminish the punch and clarity of your signal, especially in any kind of mix context.

I would also take the 62Hz slider down a bit to taste. This is where you will start to notice your guitar sound loosing frequencies that are pertinent to the guitar's actual range. I would take it down till you start hearing a difference which will probably be around ~2-3dB. If you wanna add bass - which I wouldn't really recommend at this point - add at 125Hz.

I would then subtract again at 16KHz. Again like 62Hz you can hear this one, so subtract it until you hear a difference. This could be as little a 1dB! This range is sorta itchy/fizz. don't subtract too much or you'll get a significant dulling effect.

If you notice any volume loss between active and bypass, increase the output to make-up the difference. Remember: EQ is about better (in a context) NOT louder.

This is all just basic filtering to keep the guitar more in it's usable range. The effect will be most appreciable in a band/mix context. The rest is up to you depending on what you are after, room, tone, etc.

In old days like I had markers written down for sounds to come from p90 using various eq positions.emulate strat Paul hb Gretsch in my g7.
Tweek is everything. Start flat

schmee said:
I used to use an EQ all the time. Mostly to adjust for certain "rooms".But eventually decided it was a tone sucking device. While it works to enhance or degrade certain freq's, it also seems to take away some good.

Setup: Set all sliders flat.
Play each string some and find which slider effects that string's notes the most. Maybe put a piece of tape on the unit and mark it for now.
Listen and decide what you want more of. just try tweaking some a bit.
Click to expand...

Same. Got rid of mine when I realized more than anything it was just another thing in my signal. At first I like it. Then I tweaked some more, then some more. Turn it off one night, and freaking loved my tone!

I definitely heard some thinning out happening. Mxr 6 band.

If I were to eq again, I'd go for a programmable. Would be cool to change on the fly with a stomp.

I used to do this with the foot switchable EQ on my Mesa Boogie. I put a slight smile curve on it, and that was my rhythm tone. For my solos, I switched the EQ off which ran it flat, which was in relative terms a mid boost. It worked out great that way.

Well, sort out your amp settings first, and also spend some time making sure you know how your guitar's tone and volume controls should be set for your best base tone in the various PU combinations. Surprisingly, many people just slap the EQ in line and expect it to resolve everything optimally. Also, as other point out, using the EQ as a boost, which is what most players end up doing since more volume is often perceived as an improvement in tone, kind of makes everything suck a bit. There are loads better places to boost overall output than when EQing. Finally, I find that slight tweaks are generally best, though ut's tempting to go to extremes. In reality, slightly cutting something while slightly boosting something else can end up being a pretty noticeable change. I wish EQs had less boost/cut capability so that there was more room for nuance in settings. I have several EQs but generally end up removing them from my board because I find I don't really need them, and they also seem to create an inflexible "one best tone" arrangement. I rely on pickup selection/variation and amp settings more than anything.

Graphic EQs are very crude and limited tone shaping devices. Parametric EQs are much more powerful tools, but with that power comes great responsibility- it's REALLY easy to screw stuff up with parametric EQ, especially if you don't know what you're doing. That's probably why there aren't many parametric EQ pedals.

Graphic EQs offer you a selection of fixed frequencies with a fixed bandwidth. If your EQ only has selections at 500hz and 1K but your problem frequency is at 800hz, guess what? You're Sierra Oscar Lima.

A parametric EQ will allow you to dial in a frequency exactly, and adjust the bandwidth (how wide or narrow the filter is).

For general tone shaping, I do generally prefer to cut rather than boost. However, one of the common uses of the Boss GE-7 is to boost 800hz and 1.7k to push a Marshall style amp into rawk armageddon, so as always, your mileage may vary.

I grew up on Peavey parametric eqs which require you to really use your ears. Too often, graphic eq users tend to use their eyes to place the sliders rather than their ears. “Use your ears, not your eyes” is my only tip.
You must log in or register to reply here.

Another post about that Alessandro GA-SC64 and Princeton RI