Semi hollow to pair my Tele

I'm not a huge fan of semis, but my Classic Vibe Starcaster is a pretty fun guitar. Agree fully with @drmordo. I love mine. I wanted a semi and was happy to see Fender re-issue this as a Squier CV. This price was right at the time, too. What scale are those starcasters?

Also, keep an eye out for a used Coronado. I played one the other day and it was really nice.
P

339 is a good choice. I found a used Ibanez as120 which is great. Also a thinking tele or G&L blues boy semi hollow would be cool

I do like the Ibanez Artcore semi hollows but they're made in China. Second hand semi hollows (Korean made or Indonesia) can be had for sub $600 if you get one that suits you.

TBH, I don't think I can play any other semi hollow than my CS336 but they're expensive!

You'd be in Gibson-style tone territory for sure.

I don't own one because I don't play semi's, but I would readily pick a Starcaster or even a semi-hollow Thinline over a Gibson or fake Gibson (= Epi). However, if you do in fact want a "Gibson" sound, you need to forget the Fenders and go with either a Gibson/Epi or perhaps an Ibanez or Yamaha Gibson-alike. One downside on the Fenders, notably Starcasters, is the difficulty of dropping a conventional Gibson-style HB into the pickup routs. In the past, this was not a direct fit. Maybe that's changed??? My particular fave, a weirdo, is the Fender Offset Special (maybe 2012 or so, one of those paranormal or pawn shop offerings) semi-hollow that is sort of a Strat/Jazzmaster mashup with a JM-style trem and a semi-hollow body. They're rare now and pricey, but IMO almost perfect.

schmee said:
What scale are those starcasters?
Click to expand...

Based on the timeless Starfire II and III, the Starfire I SC features a 2“ thick, hollow body with an added bridge block. Seafoam Green and Snowcrest White.

Eastman semi hollows - great bang for the buck. Theyll go toe to toe with a Gibson at 1/3 the price.

Based on the timeless Starfire II and III, the Starfire I SC features a 2“ thick, hollow body with an added bridge block. Seafoam Green and Snowcrest White.

This is a hollow body Guitar not a semi hollow right?

I had an Epi339, great playing guitar - eventually moved on from it, but don't recall why - I have an Epiphone Sheraton II Pro now - love it, but its big.

I wouldn't necessarily knock Made In China - I have a squier tele that is MIC, and stock, its one of the best sounding teles I've played/heard. Had a Baja prior to that and I prefer this squier thats made in china. Not a fan of the Indonesia ones, but thats all subjective.

I'd suggest getting a used Epiphone ES-339 and just upgrade the pickups. The newer probuckers are good, but they are not quite there in my opinion. The older ones are just too muddy/wooly. A lot of the newer epi stuff is using quick connects, so its a slightly involved process upgrading.

paperman said:
This is a hollow body Guitar not a semi hollow right?
Click to expand... 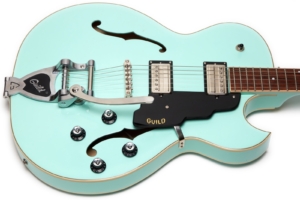 Here we have a 2020 Guild Starfire I SC (single cut) in Seafoam Green that I absolutely had to have based on the color alone. There is a fair bit of stir in the online guitar forums about these Starfire I guitars, most of which revolves around the question, how is Guild making these for …
www.gad.net

Another vote for the Ibanez Artcores. Eastmans are also good but both are from China. Quality is good regardless.
B

I’ve got the Ibanez AM93, and I can highly recommend it. Solid construction, comfortable neck, smaller size than a standard 335, so more comfortable (IMHO) for Tele/Strat/Les Paul players. It came with decent ceramic humbuckers which I liked for a while. Then I wanted P90s and switched in some Duncan Phat Cats (which I like a lot). But you might like the stock pickups. It’s worth trying out.

I would say play a bunch and one will speak to you! That said, my Epi 339 is the guitar that ended my knee-jerk prejudices against Chinese guitars. I walked past it in my local shop a dozen times, because... MIC. Then on a whim I picked it up, and it surprisingly felt like a REAL guitar. Plugged it in and lost my mind. It was like a time machine to 1966. That classic loose but punchy, sweet but edgy tone. I put it back on the wall and picked it up again three times to make sure I wasn't imagining things. I wasn't. There's a reason these Epis are almost universally loved.

I paid $350 for it with a hardshell case. Absolute best bang for the buck I ever got out of a guitar purchase.

And yes, it's a perfect complement to a Tele. Good luck! I've had Epis and Gretsches and IMHO they're not that great. So I sprung for a real Gibson ES 335 which I love. I have heard good things about the higher end Ibanez and Yamaha semi-hollows though.

Ever think of trying a G&L tribute asat bluesboy thinline/semi-hollow? I've read that some people really like them....
You must log in or register to reply here.