...for what's gotta be the 30th time, at The Paramount in Huntington NY. I've been going to their shows since the 'In Color' album, and it's always an event when Neilsen and the boys come to town.

The feel was a tad bit different this time, since Tom Petersen wasn't on stage, still in recovery from recent open heart surgery. Robin's son Taylor took over bass duties and backed up the old man on vocals (not that RZ really needed it). They even let him sing lead on 'Downed,' and he aced it.

If you're a fan of the first album, you should go see them this time out - after the obligatory 'Hello There,' they reeled off four from the debut - Oh Candy, Elo Kiddies, Hot Love and He's A Whore. Straight knockout from the jump. During the set they played songs from In Color (Big Eyes, Downed, Clock Strikes Ten), Dream Police (title track), Heaven Tonight (California Man, with an extended intro from The Move's Brontosaurus), Budokan (Ain't That A Shame, I Want You to Want Me), Lap of Luxury (The Flame, which was exceptional), All Shook Up (Stop This Game, My Baby Loves To Rock), and a few more that slip my mind right now. They even played a couple from the new album 'Another World.'

Guitars: They seemed to be carrying less guitars this time out, but there was still plenty of eye candy.

The old standby Rickenbacker
A newer Rick, couldn't tell which model - it's the one in the pic above
12 string Casino
Gibson acoustic for The Flame
Telecaster for 'Clock Strikes Ten'

Taylor stuck with one bass almost all night, an old school Hamer 12 string which sounded massive. He switched off for a couple of tunes to the one with the tort pickguard in the pic above.

All in all, I'll give the show a solid 8 out of ten. The sound was a little dodgy in spots, but the band cooked like they always do. Rick sounded a little more cohesive on his leads (last time we saw them he was a little off, but he was on fire on a few tunes).

They can still bring it live, no doubt about it. If they swing by you this time, there are worse ways to spend your money.

I've seen 'em play a few times and they work hard. Never phoned it in.

I need to see them if the world ever gets back to "normal." Not that Cheap Trick was ever for the normal model! Ha!

Saw them 30 something years ago. Killer band live. Glad they can still bring it.

I saw Cheap Trick back in the day at Billy Bobs Texas-the world's largest honky tonk. It's not the best room with low ceilings and pillars that obstruct the view but they rocked it. I remember them being true road dogs-always on tour. Like Smith Barney Cheap Trick makes money the old fashioned way-they earn it.

Had tickets to see them 3 times in high school in London and never made it.

I’ve never seen them in person—watched a bunch of vids and was very impressed.

I have met Rick Nielsen a couple of times and I can say this: He’s one of the nicest famous guys I ever met…quirky, a bit odd, but very nice and accommodating. People always talk about how weird he is, but I was more impressed by how he acted so politely to a nobody such as myself.

Who's the skinny guy without a tie and a cigarette playing the drum kit w/ the TINY bass drum? Where's the ACTUAL legendary CT drummer?

elihu said:
I saw Cheap Trick back in the day at Billy Bobs Texas-the world's largest honky tonk. It's not the best room with low ceilings and pillars that obstruct the view but they rocked it.
Click to expand...

After paying really good money (twice) to watch a pillar playing Delbert McClinton and Fabulous Thunderbirds tunes, I now refuse to go to Billy Bob’s unless I have VIP/front row seats—which I can’t afford.

90% if the seats in that place suck as a music venue.

I think these guys are the perpetual road band. For years, they seem just all over the place. That's my memory anyhoo.

Equipment: look at all those cabs and heads.

Nick Fanis said:
Who's the skinny guy without a tie and a cigarette playing the drum kit w/ the TINY bass drum? Where's the ACTUAL legendary CT drummer?
Click to expand...

That's Rick Neilsen's son Daxx on drums. While Bun E. is still technically a member of the band involved in business decisions and such, he no longer tours with them. He's had back problems for years, and there are also rumors about bad blood between Bun and Zander, but that's none of my business.

Last night, I hung up these posters in my new combo office/studio. 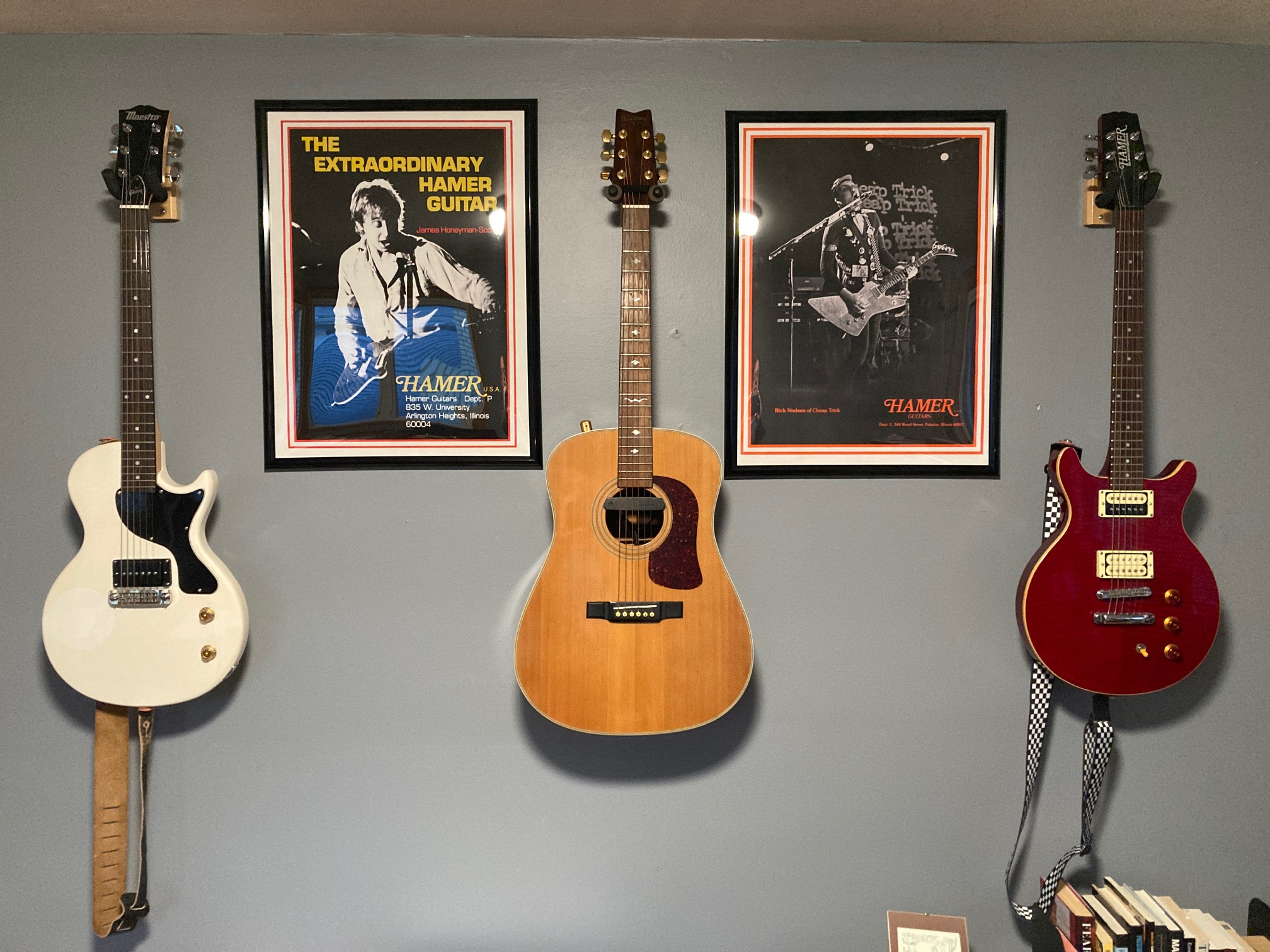 I've seen Cheap Trick live more than any other band but only about 6 times, nowhere near the 30 or 50 or 100 times many hard-core fans have seen them. I first saw them opening a triple bill at the Philly Spectrum, just after Heaven Tonight broke nation-wide. They blew The Sweet and Foghat off the stage that night. Several month later they were back co-headlining the Tower Theater with Rainbow. Next time they came back, in the midst of full-on Budokan frenzy, they were headlining the Spectrum.

Amazing live band who can still bring it despite advancing age. It's a shame they had the falling-out with Bun E. They're not really the same band without him, though Daxx does a great job.

Here's one for ya:

I love mine. Joy to play.

Saw Cheap Trick at a college bar in Bloomington, IL, back in the mid-'70s. Stood right in front of Rick and watched him do his magic. I think a little of his sweat dripped on me. Cover was like $5. Those were definitely the days ...

They take me back to ol 70s AM radio, like their tune, On the Radio.

Time to jam some CT

don71 said:
I think these guys are the perpetual road band. For years, they seem just all over the place. That's my memory anyhoo.

Equipment: look at all those cabs and heads.
Click to expand...

Those Gibson amps on Rick's side are mostly for show. Out of the nine cabinets, 8 of them are loaded with lights instead of speakers, only the middle cab in the middle stack has speakers in it. The real rig is a pair of Rivera Deluxe Reverbs in a rack that are run into an iso box with a single 12" offstage, with the Gibson 2x12" filling the stage.

Tom usually uses a combination of Hiwatt/Reeves bass amps, but Taylor was using what looked like an Orange and Fender rig. I didn't get too close to see them, but that's what they looked like from where I was.

I dig how they've got everything mounted on bigass carts - they just roll 'em off the truck and plug 'em in. Cool stuff.

I just discovered I have no Cheap Trick CDs! Must remedy this IMMEDIATELY.

LMK what you think are their best efforts to date so I can get jiggy with an order.

Happy Enchilada said:
I just discovered I have no Cheap Trick CDs! Must remedy this IMMEDIATELY.

LMK what you think are their best efforts to date so I can get jiggy with an order.
Click to expand...

My favorite is "In Color".
Heaven Tonight and Dream Police are up there.
First album ("Cheap Trick") is a lot of fans' favorite, doesn't grab me as much.
The other one called "Cheap Trick" (released in 1997) is really good, but their record company folded and got overlooked.

They've been releasing one or two a year for the last several years, which is fine with me.
You must log in or register to reply here.