Scott Ian from Anthrax is married to one of Meatloaf's daughters, I often wondered if he would have said to his father-in-law, just in passing...

"Dad, how about both our bands doing a show together?"

That was something I would have loved to pay good money for. Have them play at the MSG.

But sadly that never happened.

And to show that he could do more than just belting it out.

Who hasn't had a little of paradise with his music playing? I still remember Franny one particular evening back in '81 with her more than ample offerings.

I just saw this, made me laugh :

NHFlyCaster said:
Who hasn't had a little of paradise with his music playing? I still remember Franny one particular evening back in '81 with her more than ample offerings.

Probably doesn't mean much to you USA guys, but I always picture the dashboard of a Mk 2 Escort whenever I hear that song, probably for similar reasons to you in 1981.

I just had a search for an LP of BOOH and bought it; I just got an old turntable working and have been going through my old LPs and buying a few secondhand ones...BOOH seemed very appropriate since it turns out I never owned it, but just played my friend's copy whenever I went to his place when we were kids.

Location
out there somewhere

His name was BTB!


All these people need to stop dying. All it does is reinforce that were all gonna go some day.
Click to expand...

It's inevitable that we all face the same end but a year without losing so many too early in life would a nice change.

ricknbaker said:
I just saw this, made me laugh :
Click to expand...

You omit the critical fact that it was Boy George he turned upside down!

NHFlyCaster said:
Who hasn't had a little of paradise with his music playing? I still remember Franny one particular evening back in '81 with her more than ample offerings.

Well ya know I could be wrong but I was never much for mixing blackout with paradise and I don't recall I ever heard that tune while going there?
Possibly on one date with a terrible tease, we were dancing in the back of my truck (standing up) and she was grinding but refused to give it up.
Radio was playing in the cab and that would have been '79 so it's possible PBTDL came on?
Then we were in the cab and stuff but again, yes no yes no for a no go.
She was IIRC 16 and I was maybe 19 so all was probably for the best in the long run.
Nice girl, frustrating teaser but I hope she got a good life somewhere.
Remembering her and us I bet we would have stopped dancing and just cracked up if that tune came on the radio.

In cars? Not really, still in the free love era and not middle class or bible belt.

Damn, I didn't know this was him?
Such a moral and ethical dilemma guy for a ham?
This one I suppose actually figured larger in the general dating scene of my youth.
Not only was the '60s free love era shifting into the '80s cheap sex era, I was teaching boat building in a CETA program to kids from poor towns whose academic prospects were grim.
Swarms of girls with dim outlooks were at the program where I worked, and as I now recall that time and place and the feelings and people I experienced there, I think two out of three ain't bad was really the anthem for the working poor teen of the time, and girls in particular.
Despite all the Civil Rights and ERA stuff, rural girls were used and discarded like the middle ages.
Sad now to recall many of them who became platonic friends like I was maybe half way between brother (not sneaking into their rooms) and missing dad they could only imagine.
The two depressed mill towns these kids came from (Biddeford and Sanford), kids who could not do basic math or read a tape measure at 16, those were pretty sad places.
Two out of three would have been a win to most of those girls, whose future roles were pretty much single mom on welfare or mom trying to hang on to a breadwinner dad who earned more than he drank.

Sorry!
Seriously though, that was my 1979-80.
Before and since, I've pretty much skipped the dark underbelly of poor white America.

I saw him a few times. He always put on a great show when he was healthy.

I used to see a solo act (gtr/vox, big Bose PA) do 2 out of 3 Ain't Bad back in the day at a big venue on a Sunday afternoon, probably 3 or 400 ppl packed like sardines in the crowd and the whole place sang every word at full volume

Went on a cruise ship about 5 years ago and there was a piano lounge with a young duo playing two baby grands and they did a killer version of Paradise...


Back in the early 80s I had the pleasure of attending a Meat Loaf show at a filthy little rock club called The Network in Pasadena, MD. He had Pat Thrall on guitar, and they burned the place down that night.

I wonder, maybe it was Thrall in the video I saw with some really good guitar playing?
Somebody in the other thread mentioned Rundgren played I guess on the album and elsewhere I saw that Rundgren also produced it, but maybe it was more Thrall on tours?
I actually saw/ heard two live versions of PBTDL (my wife was watching) and I think only one had the really good guitar playing.
Most of this is news to me.

Is it just me but wouldn't Jack Black be perfect to do a tribute movie of Meatloaf? I'd watch it and I think he could pull it off as long as he doesn't over-accentuate ending note phrasing as he tends to do.

lowatter said:
Is it just me but wouldn't Jack Black be perfect to do a tribute movie of Meatloaf? I'd watch it and I think he could pull it off as long as he doesn't over-accentuate ending note phrasing as he tends to do.
Click to expand...

One of the many audience participation lines during Rocky Horror Picture Show scene where he is singing "Hot Patootie Bless My Soul".

Thanks Meat for the good times.

I remember when PBTDL came out and it was always a guess if they would play the full version on the radio. RIP.

Take back your Bernie Taupin and Elton John. Gimme Steinman and Meatloaf any day of the week. BOOH is such a campy wonderful mess that I will never tire of. And that they never quite got it right again makes it even more special.

That man could sing.

richiek65 said:
Just heard from a friend.
Divisive artist but I loved BOOH
Click to expand...

Perhaps he should have had the Salad?

I just tried to listen to Paradise By The Dashboard Light since I hadn't heard it in so many years and I thought it might have had something more to it that I didn't "get" back then. I made all the way to the "prayin' for the end of time" part before I had to shut it off. I know I must have been close to the end, but I just couldn't take any more. It's one of those things that just makes you cringe with embarrassment for the people performing it.

telemnemonics said:
Somebody in the other thread mentioned Rundgren played I guess on the album and elsewhere I saw that Rundgren also produced it, but maybe it was more Thrall on tours?
Click to expand...

It's all TR on the album, but he never did a live show with Meat. TR's Utopia was the core band for the sessions, and I think Kaz Sultan might have played bass on the first tour.

And Ellen Foley does 'Paradise' on the record, but Carla DiVito did it live.

Roy Bittan and Max Weinberg from the E Street Band did some work on it, too. From what I understand, E Street was working at Bearsville at the same time they were recording BoH.

And he was a Tele' guy. Who would have thought... 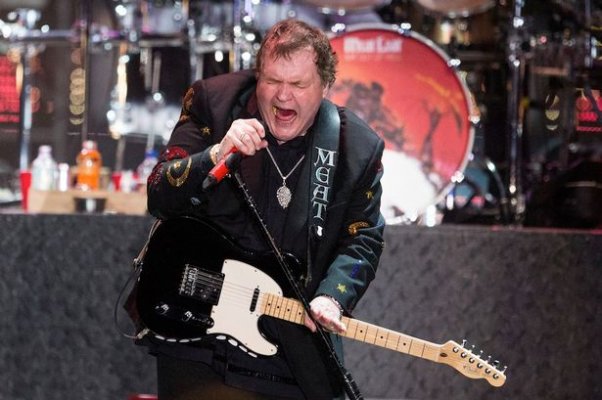 Old Fashioned drink recipe-do you have one?
2 3 4