I always use delay instead of reverb and i'll try and explain why. Reverb can be great when it's a really good reverb, but i find that to be the case on tape more than live. A lot of things that work great on tape don't necessarily works so great live. And thats how i feel about delay vs verb. When i use reverb live it tends to cover up the tone quality. The little details that make for killer tone get covered up to some degree. Thats why they usually include a setting to delay the reverb a bit, so that the original note doesn't get compromised. But thats never a great fix IMO. Better but not great. With delay i use around 260 to 300 ms and 3 or 4 repeats and it doesn't compromised the tone quality at all.

Note that this is coming from someone who uses it as a little bit of ambience, not as a effect so much. If you listened to my live tone you wouldn't even likely know i have delay on, but if i turned it off you'd realize it. Thats all i use it for and it;s always on. I've used reverb instaed at times over the years but it always messes with my tone.

I only use reverb when I'm playing clean. Delay only for crunch.

I just recently bought my first two amps without onboard reverb - a Supro and a Mesa. It is kinda weird not having the option.

Reverb is wonderful with clean guitar but Delay is wonderful with all types of guitar gain levels. If you can only have one choose Delay. Of the Delay types out there choose Echo for that '70s fade to breakup just like a fading echo would produce, Drum for that Pink Floyd / David Gimour delay type, Analog for the very late '70's and early 80's delayed notes that produced repeated notes that slowly fell apart and Digital for that super crisp repeat with no breakup what so ever. If you're all about speed go Digital. The other three are more about tonal enhancement that favors specific genres. Analog is great with crunch tones, Eric Johnson lives on Echo, and Pink Floyd was all about drum delay. Lastly .... there are some great modelling delay pedals available that come close to getting a great version of any of the delay types mentioned. None of them are dead on but they come close enough to warrant their purchase price and do deliver a wide array to choose from. Strymon, Korg, Empress and Eventide are all good examples. For true examples look at Boss, Maxon / Ibanez for analog and Boss for digital. If you prefer Echo or Drum be prepared to either spend big bucks for the original versions or, still pretty expensive, check out the modern hybrid versions. The Dawner Prince Boonar is my favorite pedal currently in production for that Drum delay type while I use pedals from Eventide, Korg, and Strymon for my Echo delays. They're not dead on but they won't force you to mortgage the house to purchase them. And yes. All three Echo types are at least 80 % to 90% accurate at less than a quarter of the price of the original versions.
W

I’ve always played with both.

1 21 gigawatts said:
If you were going to buy one cheap pedal to take the dryness out of the amp, would it be reverb or delay?
Click to expand...

Another Donner offering that I have really enjoyed is the Alpha FX. I move this from amp to amp frequently. Unfortunately, the Donner site is out of stock. 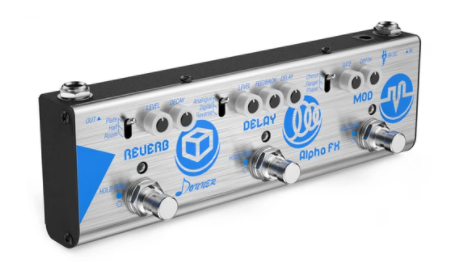 Edit: I just put this on my Stage (f)Right 5w and it sounds really good...through the 2x12, it is awesome .

From as old codger that been messing with this stuff for years and years. As already stated, to me a slap back/short delay is a must and adds life and movement to you sound and I could get by on just that and be happy but if I have my preference, I prefer to have a lite reverb in the background as a launching platform
for my slap back delay. So to me a combination Reverb/Delay would be preferable and there are plenty of pedals that do that these days. I personally use a old BOSS RV3 that will do separate Delay, or Delay/Reverb combined or separate Reverb only. Have fun with your new tube amp. Platefire

Delay. But if you want both, even at the same time, the Earthquaker Dispatch Master is pretty cool and relatively affordable used.

Maybe just me, but I absolutely love Reverb AND Delay together, like Peanut Butter and Jelly

Probably why these are a couple of my favorite pedals... 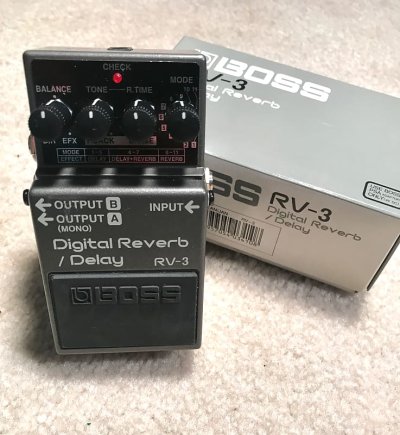 1. a Boss digital delay coz it's a worth investment for many genres. 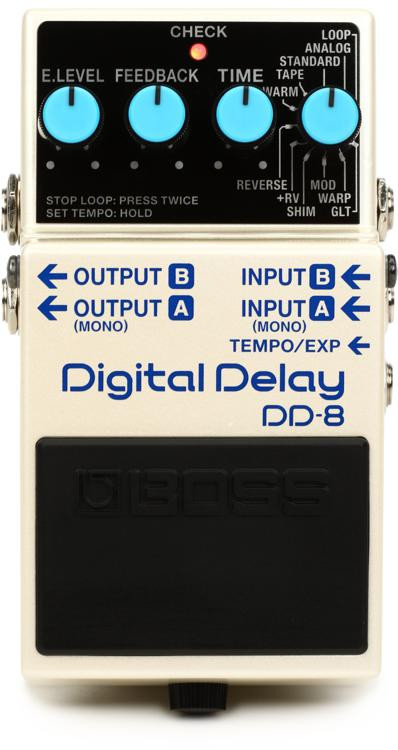 2. A Reverb pedal of your choice either Boss RV-6 or a MXR

If you want to get some wetness as you said to "take away the dryness of an amp" --> get a decent reverb pedal. I do not suggest buying cheap delay and reverb pedal, coz they won't last in the long run. Either get a Boss RV-6 or a MXR M300

As mentioned above, go first with a delay pedal coz it kinda put some wetness but not longer and thicker which a reverb does. If you are going to buy a delay pedal, go with a Boss Digital Delay of any version (e.g. Boss DD-3, DD-7, DD-8). If you are saving up money, go buy a used one on Reverb and it's a worth investment for any genre that you play.


If you play alone and not in a live setting --> go buy an audio interface (I suggest buy a Scarlett Solo coz it's more durable and it's a worth investment in the long run) --> install free reverb and delay VSTs to get a feel of how reverbs and delays work.

If live and want a feel of it coz you have an amp as you said --> go buy a multi-effect pedal --> experiment playing a delay and reverb pedal.

For me, I would recommend either buying a multi-effects or an audio interface to get to understand them. Or go for a decent delay or reverb pedal.
Have fun!
Last edited: Jul 2, 2022

But if only one pedal that can take away dryness (which can act as a reverb) and acts as a delay pedal would be a delay + reverb pedal or a double delay pedal:

Sourceaudio SA263, Earthquaker devices avalanche run, Strymon DIG are the choices while the Strymon Timeline is too overpowered and expensive. These are very decent ones.

If you want a cheap pedal that could do that, try to find a DIY pedal or clones that has both delay and reverb or a DIYs of each.

reverb IS delay: lots of little ones called "reflections"

both reverb and delay can be overextended into the mix

Cheaperpedals.com has a nice selection of inexpensive pedals so you can try out some of the excellent ideas mentioned here for not a lot of $$. I’m partial to Caline and Joyo myself, as they seem to me to be better built than many cheap pedals. Maybe Mooer fits in there as well.
Have fun finding your sound!

bobio said:
Maybe just me, but I absolutely love Reverb AND Delay together, like Peanut Butter and Jelly

Probably why these are a couple of my favorite pedals...

This is the way.

If you go cheap Chinese pedal, you can probably afford to buy a couple and try them out, or maybe stack them. A little bit of both reverb and delay can be pretty great.

I like the behringer reverb machine. They’re out of print and going up in price but still under a hundred.

I was in a surf band about ten years ago and found it a reasonable alternative to taking the train with my fender external reverb unit to go to practice.

My last 3 amps have had no onboard reverb. I am someone, if given the choice of only one pedal, would choose reverb. I've used a lot of different delay & reverb pedals over the last 12 years. I currently have 3 reverb pedals & 1 delay. Anyway, my favorite is, Strymon Flint. It is on the expensive side but I know I wasted more than that buying cheap pedals that I never bonded with.

I was a reverb addict. Fender amps with big reverb tanks. My 75 has reverb to die for.

I've never owned a Reverb pedal. If I wanted to record, I have the big fender, or my Supro (with much weaker 'verb). Live, reverb doesn't stand out NEARLY as much as delay (which I use prolifically in my psychobilly band for slapback) or chorus (which I used to use prolifically in grunge and alt rock bands).
There are some good reverb pedals. I have rack units that do digital reverb. They aren't as good in person as reverb from a big fender amp, they take minimal tweaking to sound good recorded, but playing live you aren't going to notice it as much as the other temporal effects.
Analog delays are tricky. Longer repeats often get dark. My favorite sounding delay I own is my Maxon AD999, which gets dark around 800ms delays. I basically bought a $200ish pedal for slapback because I like it's sound. But it's on my board. For the band I'm in, I use a BBE two timer that I got for $35 because I liked the original graphic. The Maxon is harder to replace, so the BBE or my third no-name delay are for practice and gigs.
So, pound for pound usefulness, a $40 delay pedal for shorter delays is going to sound better than any sub $100 reverb pedal, and be noticeable. You need to look at temporal effects (even tremelo and flange) as things that add nuance to what you do. Thicken, embellish, whatever. At that point, pick a flavor.

But delay gets you better places than a comparably priced reverb pedal.

My recommendation would be delay. It's a versatile effect. Obviously, some reverbs are more pleasant than others, but if you're playing in a room that isn't deadened (or just playing through headphones), you're going to have some natural reverb.

bottlenecker said:
I would get a longer chord and stand farther away.
Click to expand...

Like an A minor and then let it decay?
You must log in or register to reply here.

Signal Path Question - Where to put the Clean Boost
2

K
Why does my Reverb suck?