Not sure I like what I call this, but does anyone else step on two pedals at the same time? I like to use a dirt sound without delay and clean with delay. If I step on both it seems to work. Have considered more complicated options, but this seems good. Haven't tried it with shoes on though.

Still looking for those plugs without cables for interconnecting pedals. They are hard to find at a decent price. I'd probably get some from a place where I'd want to order something else as well.

For years, I laid out my pedalboard so I could step on two pedals at the same time. Chorus next to flanger, because I never used them at the same time and I could turn one off and the other on with one stomp. 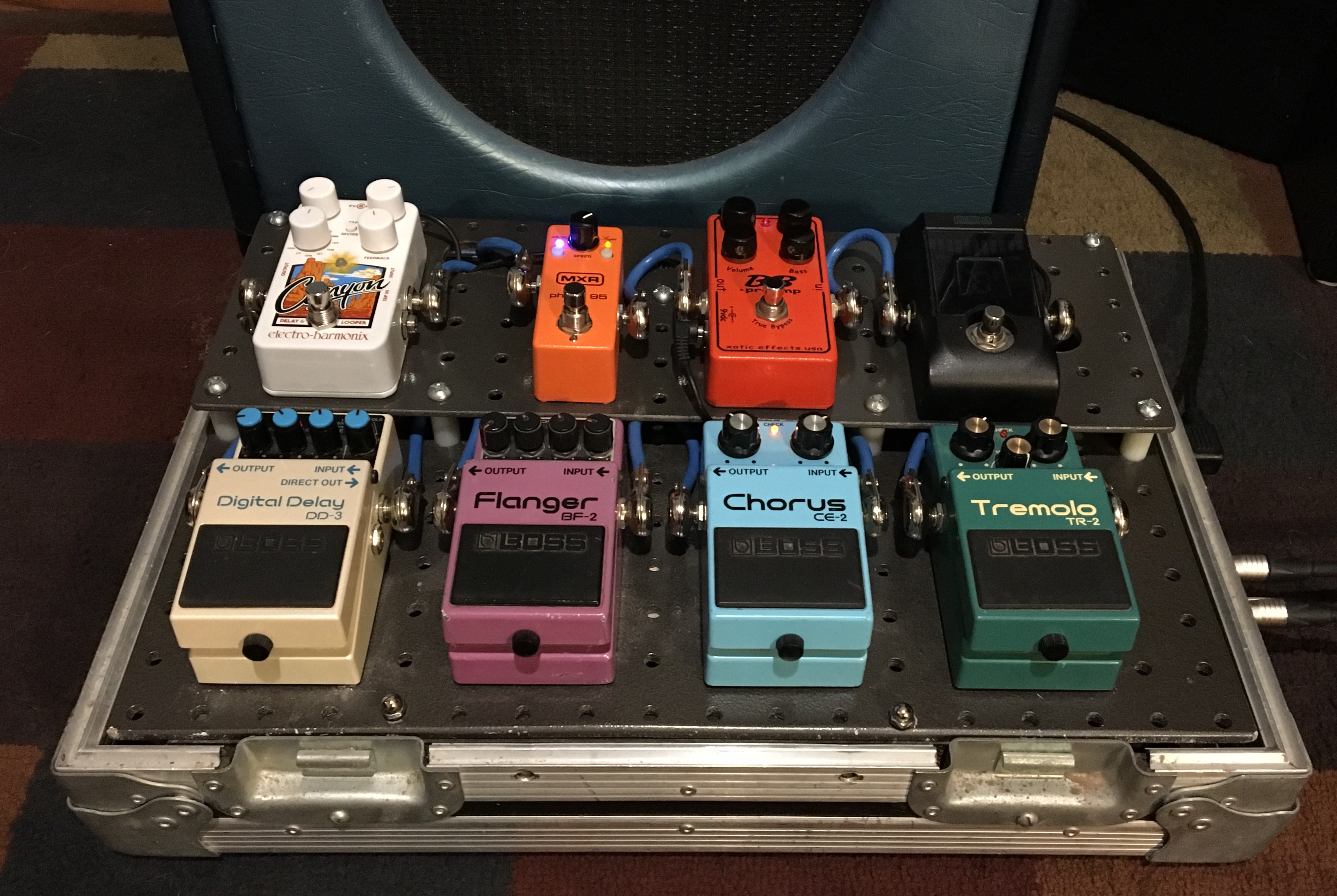 Delay on the other side of the flanger, because I often used them together (think Andy Summers) and I could turn them both on with one stomp.

Tremolo on the other side of the chorus, so I could switch from one to the other (think about the change from the verse to the chorus in “How Soon Is Now”.)

Stomping two pedals at once is not a sin, and careful pedal layout can go a long way toward reducing tap-dancing. There’s no rule that says pedals have to be positioned in the order of signal flow.

As for those solid no-cable 1/4” connectors, stay away. They apply stress to jacks which over time will shorten pedal life, especially for pedals with PC-board-mounted jacks. Mechanically, something has to flex and it’s best if it’s the cable.
Last edited: Jan 20, 2022

A boss ls2 - hook it up so you have them both on or bypassed.

Rich_S said:
As for those solid no-cable 1/4” connectors, stay away. They apply stress to jacks which over time will shorten pedal life, especially for pedals with PC-board-mounted jacks. Mechanically, something has to flex and it’s best if it’s the cable.
Click to expand...

I agree with this. Instead of the no-cable cables, get the patch cables from TourGear Designs. They'll get your pedals even closer than those connector things.

Was it something I said?

dlew919 said:
Was it something I said?
Click to expand...

Well, I was trying to do something simpler.

And I was not really mad, just joking.

radiocaster said:
Not sure I like what I call this, but does anyone else step on two pedals at the same time? I like to use a dirt sound without delay and clean with delay. If I step on both it seems to work. Have considered more complicated options, but this seems good.
Click to expand...

I've done the same, beginning back in the late 70s when I was gigging with minimalist effects. Footswitch for my Echoplex lived behind and above the channel switch for my Boogie amp. (Originally two 9V batteries were taped underneath for a shelf.) I developed the habit of hitting both whenever I'd do a pick drag.

Since then I always have a drive beside my echo, close enough to switch both at once.

Nowadays I'm running more complicated pedalboards designed to use with clean backline amps, and I do the same thing with character drives. Each board has one American-flavored and one British-type drive along the back row (sometimes others as well, but always that pairing), arranged sideways toe-to-toe so I can swap with a single tap.

Just redid my small board. Things are packed in pretty tightly now; barely had clearance for some of the plugs & power cables. But it's usable, still fits in its case, and all units are tested & working. 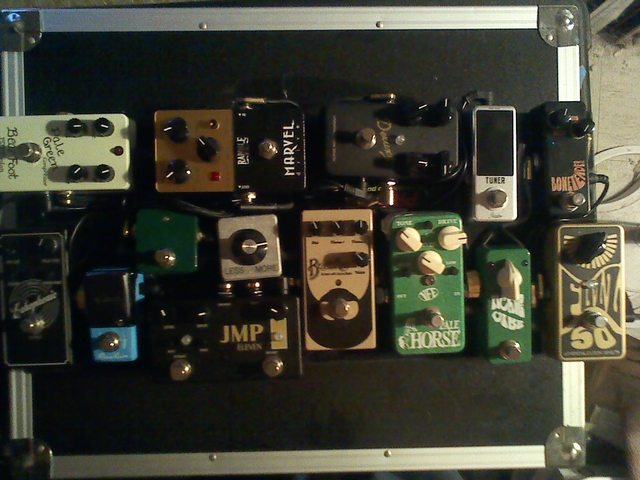 Power is underneath, a OneSpot Pro CS6 (and a thirty-foot IEC cord to go with).

Might swap character drives for different personalities: Hi Volt or TWE-1 in place of the Marvel Drive, and Tweed Fifty-Seven or Lovepedal 5e3 in place of the Blackface Deluxe. A Lumpy's Series 7 OD can replace the Bonetender too: Revolver-era Beatles tone in a can. Might even put a Super Six SRV in place of the Pale Horse when playing Fender only. But for now I'm happy with the way it is.


More explanations below, if anyone cares to read further.

Fuzzes first in line, to interact directly with the pickups.
Fuzz50 is instant 60s tone (and Jimi style cleanup), starved Bonetender is more raw and 70s sounding.
I always prefer vibe before dirt, Robin Trower style: it's less phasery-sounding that way.
Then the Pale Horse (descended from a Tube Screamer) for sweet, liquid sustain when desired.

Tuner comes next, well downstream from the fuzzes - old style ones don't like a buffer directly after.
Chorus is post-TS (for that 80s studio sound if I want) but before other drives: organic whorl like in the old days.
COT side of the JMP11 lends occasional texture, smoothing the character drives that come later.
The JMP side serves as lead channel, my hot button for solos and feedback.

Joyo Blue Rain (Bluesbreaker clone) makes a good afterdrive; often use it to emphasize pick drags too.
Echophonic & Blue Rain are side by side, nice and close; I can hit both at once (for those pick drags).
Echo is before the character drives - again like running in front of a cooking amp, so the repeats clean up.

Blackface Deluxe for American flavor/sparkle-to-grit, and Marvel Drive for Plexi flavor/crunch-to-chunk.
Also close enough together that I can hit both at once when switching between.
(They're do pretty well stacked, too. Seldom need that much gain though.) Both off for cleans, naturally.
They will be getting big buttons once I find my spares, for ease of switching and to protect knobs in front.

Finally two always-on sweeteners:
Tiny little Emerald Prince (green, no knob) is a micro version of the Chase Secret Pre on my larger board.
Pale Green comp (takes the place of a Unit 67 on the larger board) for amplike feel and end-stage EQ.

(Silver one-knob box next to Emerald Prince is a Deadbat voltage reducer for starving the Bonetender.)

radiocaster said:
Well, I was trying to do something simpler.

And I was not really mad, just joking.
Click to expand...

Fair enough. all goos. And yes. Having re read your post, I overthought things. Carry on.
You must log in or register to reply here.