Got this from a guy who bought it in 1988 and kept it in his studio for 35 years. Rarely gigged and kept in excellent shape. I got another Carvin from him which I'll post later (my 3rd Carvin post this week haha).

This is the ultra rare MkII version. It has the original MkI design and most of the same components inside. The key difference to be able to tell between the two easily is that the MkI has the Carvin script logo that is really flowy and smooth, while this one has the block letter logo that the later carpeted MkIII had. Internally, not much has changed. I've heard that they have slightly different components in a couple areas, but they still retain basically all the tone-shaping characteristics of the original amps, with just a few quality of life improvements that would be more fully fleshed out in the carpeted one. They only made these for one year, the X100Bs are rarer than hens teeth, in 4 years on Reverb, only one has come up for sale. Given that this is the much rarer X60B, this could be one of a couple thousand ever made. The back panel says that the serial number is 005921. Not sure if that's total production of all amps in one year or for the total run of the X60Bs dating back to 1985ish, but that just puts into perspective how rare these are. From what I've seen, Carvin might have just started the yearly count at 5000. I'm having a hard time finding any below that 5k number.

This is my 3rd Carvin tube head in one year. I'm going through these things just about as often as I do with guitar picks. Hoping to keep this one for a while, but I listed it on Reverb and there's a lot of interest. 14 watchers in 1 hour. It might not last a week unfortunately. I'll be keeping the X100B for a lot longer. Nice amp! An X60 would be right up my alley power-wise. I like Carvin amps but never knew there was a limited run on a certain X Series.

For many years I used a carpeted X100B head as part of my stereo half stack rig.

The Carvin was the meat and potatoes tone and the other head was either a lead focused Marshall or 5150 usually.

The Carvin was a great amp and was one of those I wish I didn’t sell. The EQ was very functional.

Les H said:
Nice amp! An X60 would be right up my alley power-wise. I like Carvin amps but never knew there was a limited run on a certain X Series.
Click to expand...

Well, it wasn't a limited run technically. Just a revision which didn't satisfy their engineers for too long.

Yeah, it's still a 0.5 on the master bedroom amp, but in terms of stage volume, I would feel fine running it at 5 on MV and really letting those power tubes cook. It also has power switching on the back, so you can run it at 25% power to get a lower volume or even overdrive the clean channel. Super versatile.

I've got 3. This one, an X100B from the same year, and a Carvin Pro Bass that has the sickest built-in distortion I've ever heard. When used on bass, it's way too much at any setting, but for guitar, it's super tasteful and smooth.

Is your 1988 the same version as this one? With the flat block logo and original tolex.

BoomTexan said:
Is your 1988 the same version as this one? With the flat block logo and original tolex.
Click to expand...

Yes, it looks the same. Here's a pic.

This head has power scaling that allows 50% and 25% power. The advantage of this is you can still drive one power tube hard at the 25% setting to get that glorious saturated tone at a lower volume. But through the 4x12 cab that 25 watts still rattles the windows pretty hard.

The interesting thing about the Carvin 100-watt amp chassis is the tubes point up in the head version and they hang downward in the combo version. So what Carvin did was simply flip the chassis 180 degrees and apply the control labels upside down. Meaning--on the head above, the input jacks are on the right and the power and standby switches are on the left. The XV112 combo has the inputs on the left and switches on the right, with all the controls in the same order...backwards. 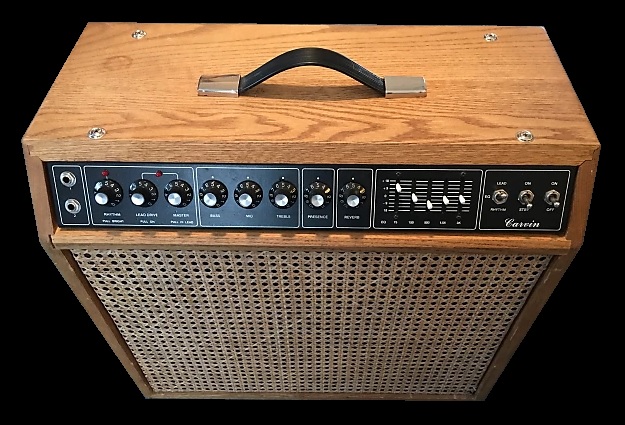 Mesa Boogie threatened Carvin with a lawsuit oover this combo amp because it was a fairly good copy of the 1x12 Boogie combo--complete with the graphic EQ. Carvin caved because they knew they were in the wrong. That's how I understand how it played out.

An X60B popped up on my news feed.
I had one once and really liked it.
There is just no room for another amp at my place

I tried the X60 1x12 combo in the 80s (when new), and returned it. It was just too heavy, and didn't give me anything my Fenders couldn't. Great amp though!
You must log in or register to reply here.
Share:
Reddit Pinterest Tumblr WhatsApp Email Share Link