Questions about a 2003 Highway One Tele

I received a 2003 HWY1 Tele today which arrived safely and I'm reasonably certain that with a few tweaks I can get it to play pretty well.

It does have some fret wear but not a lot. I do believe though that this guitar (maple neck, SB finish) may be a refin and refret. There's a lot of crud around the frets, the upper register frets have finish on the ends, the E-B-G string area on most of the neck is a bit shinny(could be from wear) and very noticeable orange peel which fades towards the D-A-E strings where there's no orange peel and the finish is matt.

The headstock front and rear are OK with no orange peel but the back of the neck looks like someone buffed it to a shine. It's too shinny to be wear.
The body also has quite a bit of orange peel and a bit of an even semi-gloss to it. Aside from scuffs etc it's pretty consistent. I'm wondering if it was a refin or would Fender have let it out of the factory that way?

Here are a few pics.

Looks just like my minty-fresh 2005 maple/SB Highway One. I bought it new, so can attest to its mintyness and freshness.

Actually have two 2005s, the other is quite rough and has been gigged a lot. The minty one was just taken out for sitting in at B.B. Kings a few times. 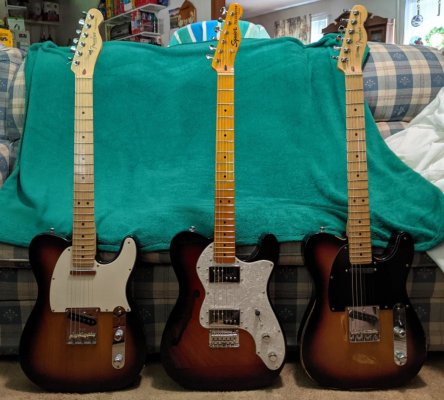 Censport: And your body and fretboard have a bit of orange peel?
P

Hmm, I only have experience with one H1 of that Era, blonde, no orange peel. I'm curious to hear when the folks in the know chime in. I was impressed withe the one I played.

Highway Ones came new with an unbuffed nitro finish so orange peel goes with the territory.

As for a shiny back of the neck the same thing was apparent on my 2007 52 Hotrod which had as one of its selling points a satin nitro neck. The back of the neck got very shiny simply from playing and wiping down afterwards. The front and rear of the headstock which didn’t get play contact or get wiped down stayed satin.

I had a Hwy 1 in sunburst I bought brand new. Body was matte lacquer and neck was satin polyester, both perfectly smooth with no orange peel. Yours has had an overspray and not a good one. Most common complaint was the body getting shiny spots from play wear. Lacquer does not stay matte and polishes to semigloss if rubbed.
G

Im a huge fan of the HW series, but some didn’t leave the factory with the best QC

Thank you all for the input.

Yes, it plays pretty well after a quick setup without cleaning up the frets, polishing them, or changing the strings. This guitar will need a lot of work so it doesn't look so ratty and sloppy. I'll need to strip the entire guitar down to clean it up.

The funny thing is the guitar was advertised as having "pipping hot vintage pickups" but they measure 7.05K for the Neck and 6.25K on he Bridge. LOL

I know some don't but I actually like the Med/Jumbo frets and the feel of the neck which is one of the reasons I picked up a HWY1.
They pickups? Meh! I'm thinking of putting in a set of Fender '52 tele pups as I've read they're a bit more mellow than the 60's type and I'm not a fan of the ice pick sound. To each his/her own.

Thank you and any other comments are welcome.

There were 3 incarnations of the Hwy 1 Tele.
The first (2003) were satin acrylic lacquer finish with Classic Series vintage 50s style pickups.
The second (2005) included the Greasebucket tone circuit.
Version 3 (2007) was a major upgrade with nitro finish, jumbo frets and AlNiCo3 pickups.

Gorquin said:
Censport: And your body and fretboard have a bit of orange peel?
Click to expand...

The minty one, yes. The rough one has been polished kinda glossy from many hours of playing.
S

I had one like that, same color and everything. Mine had been buffed shinier than the stock satin by a previous owner but had orange peel for sure. Not on the fretboard, though.

See if there is clear coat over the frets. Fender clears right over the frets on maple necks and it gets sanded off the top, but remains on the fret sides unless someone cleans it up or it all chips off.

Those necks do shine up on the back. My American Standard was satin at first but is now like glass.

I had a black 07 HWY1 Strat and the body paint looked like your examples in the spots where it was worn. Basically the satin nitro finish would "buff" to a gloss wherever it made contact with things - your arm, your body, your hand... It looked sorta uneven like yours.

If you lift the pickguard you should see a very solid line between the original satin under the guard and the buffed surface where it was exposed.

stratisfied said:
I had a Hwy 1 in sunburst I bought brand new. Body was matte lacquer and neck was satin polyester, both perfectly smooth with no orange peel. Yours has had an overspray and not a good one. Most common complaint was the body getting shiny spots from play wear. Lacquer does not stay matte and polishes to semigloss if rubbed.
Click to expand...

That's also my memory suggests, I had 2 teles and 1 hw1 strat. All had a mate finish and a satin neck. Ever seen orange peel nor gloss on a hw1 guitar. It might have been refinished or oversprayed, if that orange peal is consistent all over the body. Yes, they buffed out, but that would only be in areas of friction. Look online for pictures, there are plenty. Also compare the back of the headstock
B

Gorquin, the Highways of this era have a very inexpensive sort of "furniture lacquer" sprayed over a hard, smooth hard shell underlayment. I have 6 Highways of this general era and they all have some orange peel. Some folks sanded these finishes smooth and then ya have to go back and re-polish them from time to time - or not, no big deal.

Any 2003 Highway (that's not the ash bodied "Texas Tele) will have Medium Jumbo wire. Not the "Super" sized they began using for these later on. But a thorough fret level and crown should cure that fretwire up (at least the way I would like it, I don't care for the later huge wire).

No way Jose. Fender doesn't do that kind of work on it's guitars. That's a rattle can overspray and the previous owner didn't de-wax the neck and body before spraying. It's a combination of orange peel and fisheyes.
G

I tore the entire guitar down today. Yes, someone went and used compound or polish on this guitar an left residue all over the place. From the looks of it they probably used alcohol or Naptha in certain spots. The pickguard and bridge bottoms where both covered hardened sludge as was the body under the pickguard. There were finger prints in the finish below the control plate. I sanded the entire guitar a bit and finished it off with 1000 grit. I may go to 1500 or 2000 I'm not sure. It looks a lot better than it did.

And yes, I had to clean up the clear coat on the frets as well. I then put a guard over each fret as I polished them with 0000 steel wool. The neck pocket also had a lot of dried sludge on the sides and bottom.

The back and front of the head stock have zero orange peel.

It will play well and look decent when I'm finished.
B

Did want to mention tho, that FMIC left LOTS of polishing residue everywhere on most bodies of this era - and just shipped 'em like that. But they didn't bother on these so yeah, previous owner is your actor here.
G

After a lot of work the guitar looks more acceptable now. Not perfect but it's about 19 years old and very used. I did take the finish off the bridge, added Rutters saddles which I had laying around, and dulled the finish on the rusted control plate an knobs. Some may not like the look but it looks better to me than the rusted/crusty look it had before. I sanded off most of the over spray/clear coat someone applied and although there are still some problem areas...deep scratches etc. I think it looks a lot better than when I received it.

Semi-gloss nitro: how to finish this neck?

Friday at 11:34 AM
JathanandNessica
J