Question Regarding The Use Of a "Y-cord"...

I am performing solo, with a mic'd acoustic guitar and a mic'd voice (mine, of course).

My portable PA only has one XLR input.

I have been running the two mics (which are identical) into the dual XLR receptacles of a Y-cord, with the single end of the Y-cord (also being XLR) plugged into the single XLR input on the PA.

This has actually worked out quite well for purposes of the small-scale (retirement home) outings I've been doing, but with one disadvantage-- both mics are always at the same volume relative to each other. This isn't a deal-breaker, but there are times when I'd like to have my guitar's mic a little hotter than my vocal mic.

So, I'm wondering, if I run the vocal mic thru a simple XLR-based "inline volume control box" (passive) before it goes into the Y-cord, could I achieve my desired result by then turning the overall PA volume up to a level suitable for the guitar's mic, and then reducing the vocal mic's volume appropriately via the volume control box which (hopefully) affects the volume of that mic only?

There are some very small, very inexpensive mixers that will mix as few as two mics, and give you volume and EQ control.

bottlenecker said:
There are some very small, very inexpensive mixers that will mix as few as two mics, and give you volume and EQ control.
Click to expand...

Thanks, Bottlenecker, well worth considering!

Before you start adding in more parts an pieces maybe look at a fishman loudbox or something
where you dont have to mess around, if you are going to continue . Just saying.

If you are into pre mixing there are a few (I have never used) . I think
you can find some cheap mixers used (4 chan) that might suit.
(make sure they have an xlr out) lol 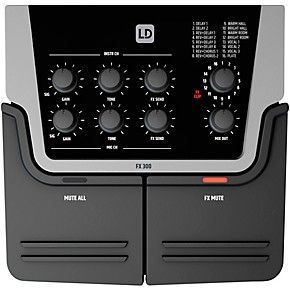 Shop for the LD Systems FX300 Vocal Effects Processor With 2-Channel Pedal and receive free shipping on your order and the guaranteed lowest price.

Bottlenecker's suggestion ... OR
For what you're doing, you could consider replacing the PA with an acoustic amp.
Lots of different flavours out there, and most are not expensive.
An acoustic guitar with a pickup should be on your radar as well. Thanks to all! I'll look into these ideas!
You must log in or register to reply here.