Jakedog said:
They are always modern and more non-traditional colors for a reason. JM and PRS have both been adamant that we’ll never see a sunburst or the like. In several of the interviews and social media posts, the colors were mentioned. The first run were all Tesla auto colors. Even the black was metallic and sparkly.

John said part of his vision for the guitar was to make it an idealized modern version of the classic. In other words, if the electric guitar was made for the first time ever in 2018, what colors would it be a available in? Blonde and sunburst would not be on the list. What besides guitars is still made in blonde or sunburst? Nothing. They exist because they were extremely popular at the time they were first utilized. They were used in furniture design and other decor extensively. They were hip and desirable. In the 50’s. By the 60’s Fender was using loads of crazy bright colors, pastels, and metallics that were all the rage in the auto industry. It was all very “modern” compared to the decade before.

And what are the dominant car colors now? White for sure but what else? Gray,? Beige?

JDB2 said:
Huh. I buy sunburst guitars because I think they are attractive and I enjoy a good wood grain. Makes for a refined looking instrument. I didn’t realize I’m just behind the times.
Click to expand...

I'm behind the times then, too. My favorite colors are sunburst, natural, white, creme.

Jakedog said:
You’re not behind the times. I’d bet dollars to donuts that if we looked at the Gibson and Fender books, sunburst is definitely the top seller across the board. Lots of people love it. I’m not one of them, but I’m aware that I’m in the minority.

John is right, though. If the solid body electric guitar had been invented in 2018 instead of 1948, the color palette that we associate with it would be very different...
Click to expand...

I've yet to confuse a Fender guitar for a. Bigsby guitar...

My Silver Sky SE impressions, I ordered one, the Dragon Fruit finish.
I was not too impressed honestly, so it was returned promptly.
It was somewhat of an impulse purchase, if I could have played one in person, I wouldn't have ordered it.

First off, the color was not at all like I expected, in the pictures online it appears to be red, this was a pink / purple color. If you like the color that's cool but I didn't.
There were some issues with one I got, it had a blemish in the paint on the back, also the satin finish on the back of the neck had something rough in the finish it that I could feel. The fretboard was very dry feeling, that could be an easy fix with some fretboard oil, and mostly it was not set up well on top of all the other issues, saddles were almost maxed out, action was high.
I know those issues could be fixed but they really shouldn't have to be on a brand new guitar that is pushing 1K.

Overall, I didn't like it, to me it just felt cheap, more like a Squier or a G&L Tribute (and some of the Tributes feel really good, to me better)

Had I liked it, I could have lived with the paint blem, and probably would have just taken some steel wool to the back of the neck (someone on YT who reviewed a SS SE had the same issue)

It certainly did NOT feel like the USA version that I had occasion to play at a local store. The USA version feels like a really well made solid guitar, I can see why folks like them, except for maybe the vintage frets.

I know it's a lot cheaper, but I decided that I much preferred my Strat with a USA Performer neck.

So, my advice FWIW YMMV etc.., try one out in person IF you can before you just order one.

Just played one 5 minutes ago. Took an enormous amount of willpower to leave it in the store. Light, super great feel, and just beautiful tones from all 5 pickup positions going through a Blackshear clean at low volume. Just a gorgeous guitar too, in the cream color. But I already have 3 more electrics than I truly need. But just, wow! For 849, I can't imagine a better guitar.

goonie said:
If Mr Smith had a conscience he would give a royalty to Fender for each one sold.
Click to expand...

There's no one at Fender today qualified to receive that royalty. Fender ought to pay Mr. Smith for some consulting.

Dammit, and now I cannot get that guitar out of my mind. To the point of seriously contemplating letting go of two other perfectly fine guitars to grab it.

Ron R said:
Dammit, and now I cannot get that guitar out of my mind. To the point of seriously contemplating letting go of two other perfectly fine guitars to grab it.
Click to expand...

The Silver Sky is a great guitar. Why should everybody else in the world have one and you don't? You've worked hard, you've saved your money, and you've earned the right to have any guitar you want. You deserve a Silver Sky.


"I felt a great disturbance in The Force, as if millions of Stratocasters suddenly cried out in terror and were suddenly silenced. I fear something terrible has happened." --Obi Wankin' Obi

Jupiter said:
lucky for me I'm not too attracted to the LEGO colors
Click to expand...

I can't take the headstock seriously.

I love PRS, but the Silver Sky does nothing for “me”.

In fact, the BatStrat is likely to get a roomie next year... 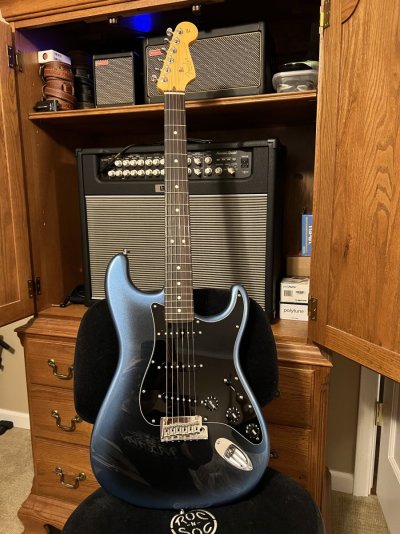 I am far more interested in the Santana SE than a Silver Sky SE.

bobio said:
I love PRS, but the Silver Sky does nothing for “me”.

In fact, the BatStrat is likely to get a roomie next year...

I am far more interested in the Santana SE than a Silver Sky SE.

To each his own and all, but FWIW, I've played other SEs (mostly Customs), and not been bitten by the GAS bug - they never felt quite the same as my US Custom. And I wasn't really lusting for a Silver Sky. But then I picked that one up while at the GC...

Location
The central gem of Ohio

I picked one up from GC about a month ago.

I have owned numerous Strats over they years, from Squier Standards to MIAs. This guitar holds up to them well - if not outright beats them.

My SS SE has been my favorite guitar purchase in years, and has been getting about 95% of my play time over the other guitars I have (including a MIJ Strat and Gretsch G6119).

3+3 headstock just doesn't work for me visually on a Strat body, I have decades of 6-inline imprinted. It's like a reverse V headstock would be on a Les Paul I'm sure it sounds and plays great.

Went back for it on the way to band practice last night - gone. Seems the Moon White and Stone Blue are the 2 most in demand colors.
Should get one delivered next week.

ficelles said:
3+3 headstock just doesn't work for me visually on a Strat body, I have decades of 6-inline imprinted. It's like a reverse V headstock would be on a Les Paul I'm sure it sounds and plays great.
Click to expand...

I understand - it's like me and offsets, or me and Bigsbys. I guess, being an early inductee into the cult of PRS, it doesn't bother me. In fact, in some perverse way, I kinda like that it's a finger in the eye of traditionalists.
But your last sentence is very accurate too.

My new moon white one was delivered yesterday. Still very much living up to my initial impression. I can't wait to take it to band practice Wednesday to see how it holds up there. I can't imagine it not performing brilliantly there as well.
You must log in or register to reply here.

Gassing for a strat